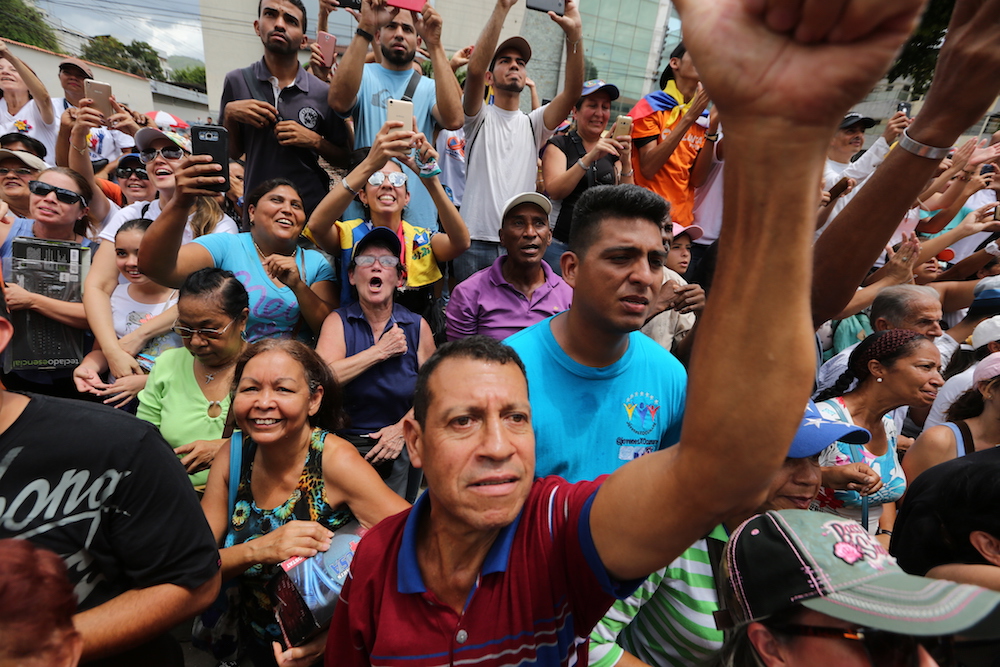 Locals cheer during a rally with Venezuela's opposition leader and self-proclaimed President Juan Guaidó in Charallave, on the outskirts of Caracas, Venezuela, on June 8, 2019. Courtesy of Fernando Llano/Associated Press.

When I sat down to write about what it feels like to live in Venezuela right now, I thought it would be easy. After all, this is what I do for a living. Though I have tried to branch out as a freelance journalist to focus on my other interests—literature, history, LGBTQ topics, media—I never seem to fully escape Venezuela. I’ve taken for granted that, until the very end, I will struggle to understand my country.

Despite some missed chances, I can’t say some things have gone badly for me, work-wise. I have college friends working in warehouses in the United States, and colleagues cleaning floors or attending tables in Chile. And the last I heard, my former editor at the newspaper where I did my internship is now a janitor in Peru.

I understand why they have left, along with many of my friends and relatives, and over 10 percent of the country’s population.

For the most part, the lives of Venezuelans who have departed are relatively easier than the grand majority of those who have stayed. Life here is famously marked by food shortages, hyperinflation, rampant violence, and a decrepit infrastructure that leave many of us without power for hours. Running water is erratic. And as time goes on, all of these problems have only deepened, making even the most basic activities increasingly difficult to endure.

Yet, here I am, writing these words, struggling with daily blackouts and a feeble internet connection. I’ve been writing since I was very young; it helps me to organize my ideas, express myself, and try to understand the world around me. Though I never imagined myself as a journalist, at the same time I never saw myself doing anything but writing. In my career reporting, I’ve found an energy and urgency that I never felt with fiction. Something like Venezuela constantly challenges you; you don’t get easy, simple answers.

I think what I write helps a little, because Venezuelans need narratives now. Both inside and outside the country, we are always having to explain ourselves over and over—even as we face a situation that we ourselves can’t quite grasp. This sense of confusion has only increased in the past few months, with the country falling into a constitutional crisis that has put us in the international spotlight.

On January 24th, the day after the speaker of the nation’s legislature Juan Guaidó took over the presidential post after the legislature declared it vacant, I was flooded with messages. Some were from people I’ve never met before, including a message from a journalism student in California asking what everyone else is asking: Why is this happening to Venezuela?

Now, despite tension having died out since the failed military uprising led by Guaidó on April 30th, the question remains.

According to the government headed by President Nicolás Maduro—and the explanation I see and hear again and again on state media and pro-government outlets—all our problems come from acts of sabotage, and from a strategy of U.S. imperialism against the Bolivarian Revolution and Maduro, who was appointed by Hugo Chávez on his last public appearance.

I can see why it sounds plausible enough. Latin America’s history is one that has been defined by colonialism, imposition, and exploitation, and Venezuela has been no exception. In the last century we have been bound economically and culturally to the United States, a process propitiated by and impossible to untangle from oil, which today remains the country’s main revenue source.

But if I have learned anything about journalism, it is that if you know how to write a news story you don’t need to lie, you simply omit. That’s the problem with easy answers and one-size-fits-all narratives: you ignore, disregard, or move things just a little bit to make the story work.

In the past, the majority of private media companies were very critical of Chávez and Maduro. With time, some outlets were sold to Chavismo-allied business people, while others were forced out of the business. And a few simply became compliant, wary of straying too far from the government’s official version. The vague, euphemistic phrase “an irregular situation” has almost become an icon of self-censored news in today’s Venezuela.

Outside of a few websites, there are virtually no nationwide outlets most people consider reliable. Instead, Venezuelans seeking a version of reality other than Maduro’s rely heavily on social media where fact and truth are always in danger of being supplanted by immediacy and bias. Newscasts from Miami and Colombia on YouTube, message groups on WhatsApp and Telegram, and a constant feed of communities on Facebook and Twitter are how people get breaking news, for better or for worse. You get up with this sort of news, go to bed with it, and you check it through the day as a reminder that you’re not alone in this tragedy.

I see some of the same distortion and ignorance when it comes to international news about my country. On one side, you have Brazil’s Jair Bolsonaro and Donald Trump championing the Venezuelan cause while taking the chance to dust off the old bogeyman of socialism—loosely defined as everything to their left—to paint anyone against them with the same brush, while curtailing sensible and necessary reforms in their own countries.

Things don’t exactly fare better on the other side. Many on the left supported the Bolivarian Revolution in its early years, and some still do, either for ideological affinity, economic investment, or a bit of both. For many in this position, my country is an uncomfortable truth, which is better dismissed, ignored, or left alone and out of sight. Others choose to defend the revolution to the very end, arguing that—despite its flaws, excesses, and abuses—there’s no better alternative in this time and age.

Venezuela, therefore, is either a bogeyman or a punch line. But this, too, is a simplification where I have taken out or left out facts to make my point.

For the 90-plus percent of people in my country who live in poverty, the statements of Trump, or Bolsonaro, or Putin, or a bunch of Americans in a Washington, D.C., embassy are alien and distant.

When you spend a good deal of your time living with blackouts and obtaining food, water and other essentials—in other words, surviving—you don’t have the privilege of thinking too much about the future.

I can’t help but turn to history to try to make sense of this situation and maybe find some glimmer of hope.

Newscasts from Miami and Colombia on YouTube, message groups on WhatsApp and Telegram, and a constant feed of communities on Facebook and Twitter are how people get breaking news, for better or for worse. You get up with this sort of news, go to bed with it, and you check it through the day as a reminder that you’re not alone in this tragedy.

Last year, I visited Berlin and saw the remains of the Berlin Wall. Different parts of the Cold War’s most apt and enduring symbol have been used for different things. On one end there’s a memorial, lest you forget how this country was divided, and on the other an art gallery, where the former symbol of oppression now displays, among other things, the famous kiss between Soviet leader Leonid Brezhnev and German Democratic Republic leader Erich Honecker. Tourists gathered in front to take selfies as if it were the Mona Lisa in the Louvre Museum.

In Berlin’s Mitte, I walked through Checkpoint Charlie, a small wooden shed that served as a gate between the East and the West. Now it’s surrounded by McDonald’s, Starbucks, and Kentucky Fried Chicken. Street vendors sell you old Soviet caps, pieces of the wall in small plastic cases, and other tokens that celebrate the victory of Western liberal democracy.

There, tacky actors in military uniforms waved U.S flags and took pictures with American tourists, who were unable to hide a certain triumphalist smugness. I couldn’t help but think of the East Germans who, in 1989, gathered in Alexanderplatz, protesting for freedom, peace, and democracy, risking their own lives for what they believed in.

Is this the kind of future for which they fought? And what is the meaning of a society’s suffering anyway? Maybe it’s all cyclical, and in the long run there are times of peace and plenty and times of hunger and chaos. Maybe, whether we like it or not, nations and individuals are simple subjects to major forces beyond their control, like leaves in the wind.

Maybe, the most simple and dispiriting notion of all, there’s no meaning in suffering. It just happens. But we continue fighting back in the hope that what we achieve with our struggle will retroactively provide it with some meaning.