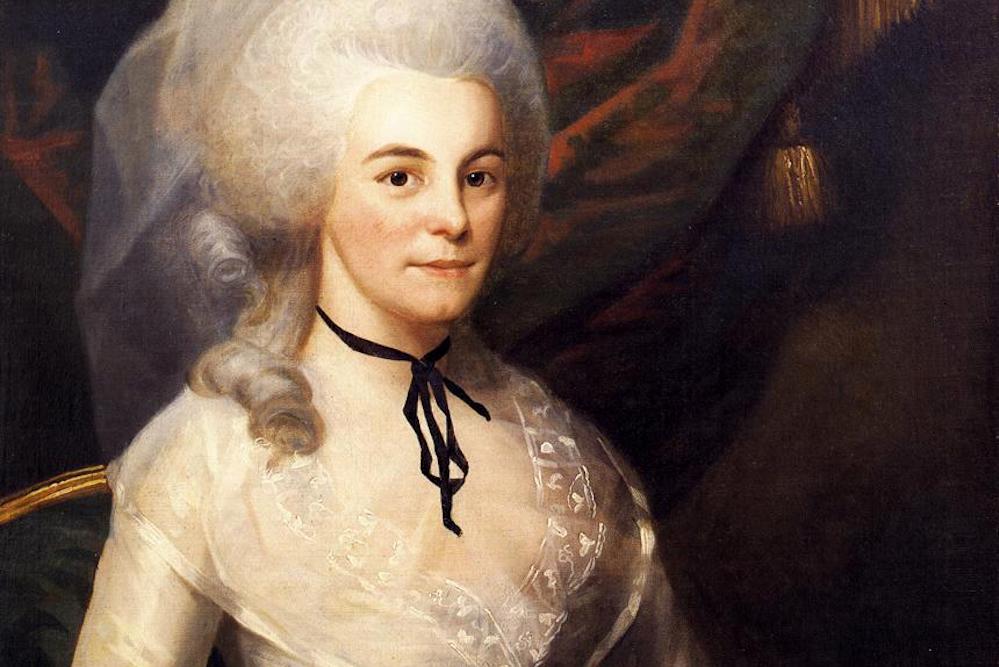 Eliza Hamilton lived another 50 years after her husband’s death in 1804, doing good works, and, in her later years, boldly journeying west by riverboat. Courtesy of Wikimedia Commons/Museum of the City of New York.

The musical Hamilton introduced theatergoers to Eliza Schuyler, the wife of Alexander Hamilton, and her sisters Angelica and Peggy. But there is much more to Eliza’s American life than we can see in the musical. When her distant cousin, James Fenimore Cooper, wrote about life on the Hudson River frontier in The Last of the Mohicans, he might as well as have been describing her girlhood. Later, as part of that generation who fought for, and won, American independence, Eliza was friends with Martha Washington—and of course she kept Alexander Hamilton’s secrets. In her quiet and private way, she sacrificed and fought for the American republic, which she also got to see thrive and grow.

When Alexander Hamilton died in his 1804 duel with Aaron Burr, Eliza, then 47 years old, still had more than half her life, and a good part of the 19th century, ahead of her. She spent the years after her husband’s death performing good works. She raised their eight children as a single and financially strapped mother. She also raised the children of siblings and strangers when perils of the era left them without mothers. She famously co-founded an orphanage in New York City, which still exists today as Graham Windham, and she established the Hamilton Free School, among the first public schools in Harlem. She helped her old friend Dolley Madison plan the construction of the Washington Monument.

And even as an elderly woman, Hamilton continued writing her American story—by traveling west to Wisconsin alone, by the grueling path known as the northern steamboat route. When Hamilton set off on her journey in 1837, the steamboat route was an itinerary few men had dared to follow, and for a woman in her 80s to make the trip was astounding.

She had embarked on the journey to see one of her children. Being the child of Alexander Hamilton was a point of pride and a burden, and each of the Hamilton children responded differently to their father’s legacy. Some of the Hamilton boys stayed close and became stewards of the Hamilton legacy, working in business or as attorneys, writing their father’s long-delayed biography and helping their mother gather up his letters and mementos. One daughter, Angelica, had fallen into madness; Eliza and her other daughter cared for her.

Other children wanted to shake free—none more than the Hamiltons’ second youngest son, William, who made his home in far-off Illinois and Wisconsin as a soldier and backwoodsman. The frontier suited William Hamilton. Those who met him during the 1830s described him as intelligent and cultured, but notably rustic and weatherworn, with his deerskin dress, colorful language, and coarse manners. People said that no one would ever guess that he was the son of Alexander Hamilton—which was just how William wanted it. When older brother Alexander Jr., made the journey to see William in 1835, he came home with wild tales of his brother’s exploits in the so-called Black Hawk War of 1832 and talked of finding up-and-coming state senator Abraham Lincoln “lying upon the counter in midday telling stories.” No one should expect to see William back East anytime in the near future, Alexander Jr. told his mother.

By the time Eliza Hamilton approached her 80s, she hadn’t seen her wandering boy in more than 15 years, and she seized on the notion of making a journey west to see him. We don’t know if she ever talked about her motivations for making the trip. She may have wanted to deliver a long-awaited pension settlement to William, who was living a meager lifestyle in the woods. I like to think she had a hankering to see the American West, with its mighty rivers and broad, rolling prairies. Rivers and mountains had been in her blood since her girlhood on the Hudson, when she had wondered what lay on the far side of the Catskills.

Hamilton wrote home a handful of letters to her family, but the best glimpses into her journey— which swung wildly between luxury and hardship—come from the accounts of other travelers who made the river voyage in the 1830s.

Hamilton traveled the northern route to the Midwest, journeying from upstate New York, where the Erie Canal had opened only a few years earlier, to the network of rivers that crisscrossed the center of America. Springtime voyagers were advised to make the first and most tedious leg of the journey, which involved travel both by horse and by barge, when the ground was still firm but the water was not frozen. So Hamilton set off from her childhood home in Albany in the winter of 1837, making her way north by a combination of carriage and boat, up the Hudson River to Albany.

She brought her daughter Angelica to the home of her youngest son, Phil, who would care for his mentally ill sister in her mother’s absence. Hamilton spent several weeks in Albany visiting Phil and other family, departing in the first days of March to follow the Erie Canal—then a modern wonder of technology—westward. The spring of 1837 was warmer than usual, and muddy conditions slowed horse-drawn carriages. Accompanied by a maid, Hamilton bumped along for nearly three weeks, over rickety plank turnpikes and in commercial flat-bottomed boats dragged by horses across the shallows. America’s westward transportation system in the 1830s was a patchwork of local schedules and conveyances.

By mid-March, after turning to follow the Allegheny River, the travelers reached Pittsburgh, Pennsylvania. Hamilton wrote in a letter that she found “a considerable town on the junction of three rivers, no beauty but good Buildings, gloomy from the use of coal.” But setting off for Cincinnati, Ohio—she expected to arrive on March 19th—she was jubilant. The steamboat packets making their way down the Allegheny were grand floating hotels, with wood-paneled staterooms and chandeliers. The captain of her vessel warmly welcomed her when he discovered she was Mrs. General Hamilton. He insisted that she dine at the captain’s table and drink his Madeira.

Even as an elderly woman, Hamilton continued writing her American story—by traveling west to Wisconsin alone, by the grueling path known as the northern steamboat route. When Hamilton set off on her journey in 1837, the steamboat route was an itinerary few men had dared to follow, and for a woman in her 80s to make the trip was astounding.

Eliza Hamilton was on an adventure. The dangers were real: Steamships snagged on sunken logs and uneven river bottoms and sank with alarming regularity. Hamilton wrote letters home describing the muddy waters of the turbulent springtime river and difficult navigation. Fear of the wilderness kept most women and many men, too, confined to the steamboat’s salon and parlor, but Hamilton was having none of that. She was here, traveling to the West, in defiance of what anyone had said she should do at 80. She was still the same tomboy she had been when Alexander Hamilton met her—at least, in spirit.

Her letters home at each riverside village were filled with descriptions of the great beauty of the frontier and the awesome power of the river that carried her. By April, Hamilton had reached Louisville, Kentucky, on the southern bank of the Ohio River—a prosperous commercial center with banks, bookstores, breweries, and assorted other businesses. In May, Hamilton’s boat glided past forest wilderness and outpost steam-mills into St. Louis, Missouri. Here, as her journey west neared its destination, she wrote her son Philip on May 23rd:

I have passed the Ohio, the river is very spacious, but very difficult of navigation, the shores beautiful and the vessel approaching the shore at the distance of one dozen feet; no wharf, the water is so mixed with clay that it is not drinkable without wine. This evening we shall be at St. Louis on the Mississippi. Our passage will be tedious as we go against the stream. Let me hear from you, particularly respecting Angelica and all the family.

Hamilton had been traveling against the stream, in one sense or another, for decades, and it would not trouble her now.

Two weeks later, in early June, she passed at last the great junction where the Ohio River meets the Mississippi, where the waters mixed green and brown at the mighty confluence. From there, she changed to a small local steamer named the Burlington heading upriver, where a chance meeting with her was recorded by a traveling British scientist named George Featherstonhaugh.

“On board the Burlington,” Featherstonhaugh recorded,

I found Mrs. Hamilton, the widow of the celebrated Alexander Hamilton. … This lively old lady, now about eighty years old, told me that, knowing she might not have a long time to see things of this world in, she had determined to avail herself of the great facilities for traveling, and pay a visit to her son; and having an inclination to see all she could, was determined to ascend the Mississippi to the St. Peter’s [Minnesota River]. I could not but admire her spirit and vivacity.

Most who met Eliza Hamilton would agree. What likely mattered most to Hamilton was that, when she stepped off the boat in Galena, her son, no longer the boy she remembered, was waiting to greet her.