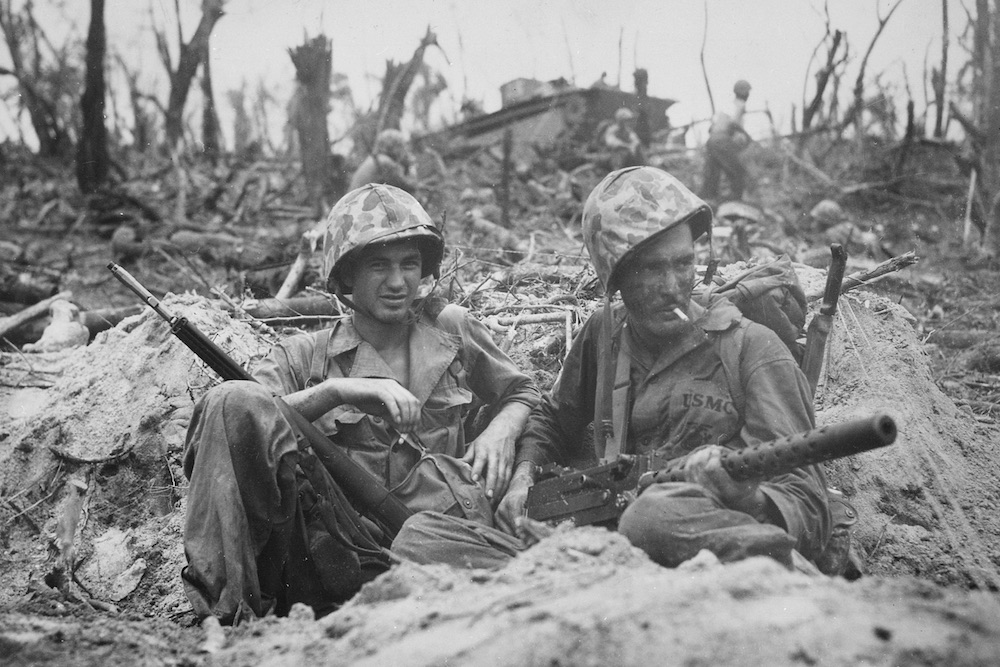 Marine Pfc. Douglas Lightheart (right) cradles a 30-caliber machine gun in his lap while he and his buddy, Pfc. Gerald Churchby, take time out for a cigarette break on the Peleliu Islands, July 1944. Courtesy of NARA, Digital Archives, 532538.

Mention of the American military-industrial complex conjures up images of massive weapons procurement programs and advanced technologies: supersonic bombers, strategic missiles, armor-plated tanks, nuclear submarines, and complex space systems. However, a key element of the military lifestyle for many years was not a weapon or even a machine, but one of the world’s most highly engineered consumer products: the manufactured cigarette.

U.S. soldiers used to smoke often in historical footage, so why don’t they anymore? Why are U.S. military officers now banned from smoking in uniform on some installations? Looking back at military smoking culture, stark distinctions separate the past and the present: Hardly anyone smokes in public on bases today. There are no cigarette billboards, no smoke breaks on the rifle range, no ash trays in the squadron bar, and no smoke-filled post-mission briefing rooms.

The demise of soldierly smoking during the 20th century is a story of power, politics, culture, and money. The nearly 90-year-long relationship reveals how difficult it can be to extricate the government from corporate collaboration once companies get entrenched in partnerships. And, of course, when an intensely passionate affair turns sour, the fists—and the lobbyists—come out.

But the love between the Army and the cigarette all started rather innocently on the World War I battlefield. After a year of war, the Army decided to give out cigarettes to enlisted men because they wanted to keep them calm during battle and free of boredom. The Army was aided, ironically, by the Y, which also handed out billions more manufactured cigarettes to soldiers. For its part, the Y wanted to keep men from liquor and sex workers. The vice of manufactured cigarette smoking was the happy compromise from which everyone got something.

Soon Y volunteers could be found in every corner of the frontlines providing “loosies” to nicotine-starved soldiers, or selling them by the pack at Y huts in the rear. In the spring of 1918, the Army became the first branch of the U.S. armed forces to issue manufactured cigarettes as part of field rations, and the rest, as they say, is history.

On the eve of entering WWI, Americans smoked only 18 billion manufactured cigarettes per year, with just seven percent of American tobacco users lighting the occasional manufactured cigarette. After WWI, the numbers would more than double, and by 1920, Americans smoked 45 billion cigarettes. War, the Army’s involvement with cigarette rations, and subsequent changes in cultural perceptions about cigarette smoking were all at the heart of this dramatic increase.

Those familiar with American pop culture in general, and American military culture specifically, have likely heard the phrase “Smoke ‘em if you got ‘em!” For generations, it was a ubiquitous line associated with military service and soldiering that eventually spilled into civilian life. After WWI, the phrase was used by drill sergeants or training non-commissioned officers to signal it was time for a smoke break. If a soldier didn’t smoke, he had to keep on working, whether it was cleaning up shell casings or filling sand bags. As a result, most soldiers learned to smoke.

If World War I started the soldier-cigarette bond, World War II cemented it. When these cigarette-wielding WWI heroes returned home, the cigarette craze spread and what had been seen as an affectation of dandies was now a rite of passage into manhood. By WWII, American men were smoking men. To meet the smoking needs of upwards of 17 million draftees and volunteers during the war, the U.S. Army, as lead agent for cigarette procurement, handed out—either through rations, morale items, or post exchange sales—nearly 350 billion cigarettes. By 1950, nearly 80 percent of men aged 18 to 64 used tobacco, with the vast majority smoking cigarettes.

Despite scientists definitively linking smoking with cancer in 1952, and the U.S. surgeon general releasing the first general cigarette warning in 1964, cigarettes remained part of soldiers’ rations.

Small cracks in the union of soldiers, cigarettes, and the military started to appear in 1973. The first was Congressman Charles Bennett’s legislation to remove cigarettes from soldiers’ rations. He argued that they were a fiscal and physical liability. With Congress starting to acquire a new, all-volunteer force comprised of long-serving professional soldiers and their families, the health care costs of such a force—rather than one made up of 18-year-old single men serving for two years—emerged as a serious concern. Further, Bennett felt it was morally wrong to issue items proven to be deadly to soldiers’ health.

Bennett easily passed his legislation, but the fight was not over. After fostering the relationship between soldiers and cigarettes for a half century, the Department of Defense and fiscally minded legislators like Bennett faced formidable political, cultural, economic, and internal challenges as they fought to break the soldier-cigarette bond they had forged. The crack Bennett created with his legislation grew to deep fissures over the next decade, leading to a divorce that became final in 1986.

There are cheap divorces, and there are expensive ones. This was an expensive divorce. Between 1973-1986, powerful Beltway lobbyists engaged in a running battle over the future of cigarette smoking in America. The contenders included the tobacco lobby and powerful “tobaccoland” politicians on one side, and health- and money-conscious legislators on the other, with the Department of Defense often stuck in between. Key figures like Senator Jesse Helms of North Carolina marshaled their forces in a bitter fight against powerful defense officials, including Secretary of Defense Caspar Weinberger, who had established his anti-smoking pedigree by advocating for warning labels in 1968 at the Federal Trade Commission, and Surgeon General C. Everett Koop, who called for a “smoke-free America” in 1984.

When the Senate battle ended and the smoke cleared, Defense Secretary Caspar Weinberger and anti-smoking legislators emerged victorious, with the Department of Defense instituting smoking cessation as policy in April 1986. The U.S. Army took it one step further and called smoking and soldiering incompatible, demanding the “elimination of tobacco products usage in the Army.” The depth of this bitter struggle is telling when viewed as a timeline. The 1964 Surgeon General Report appeared 46 years after the first military cigarette ration. A further 22 years were needed to advance military smoking cessation as official policy, and it took an additional sixteen years to sever government subsidies providing soldiers with low-cost cigarettes. After 46 years of entrenchment, it took 38 years to officially snuff out cigarettes as a dominant aspect of military culture and consumption.

The powerful cigarette industry was willing to go to nearly any length to keep a steady stream of 18 to 22-year-old smoking soldiers in its grip. Further, displaying paradoxical behavior consistent with much of American history, the federal government resisted killing a goose that laid golden eggs in the form of enormous tax receipts, while costing businesses, taxpayers, and state and federal agencies billions in health care expenditures and lost productivity—not to mention the painful and premature death of its citizens. As scholar Herbert Butterfield would say: It is a history, like all history, of tragedy and irony.