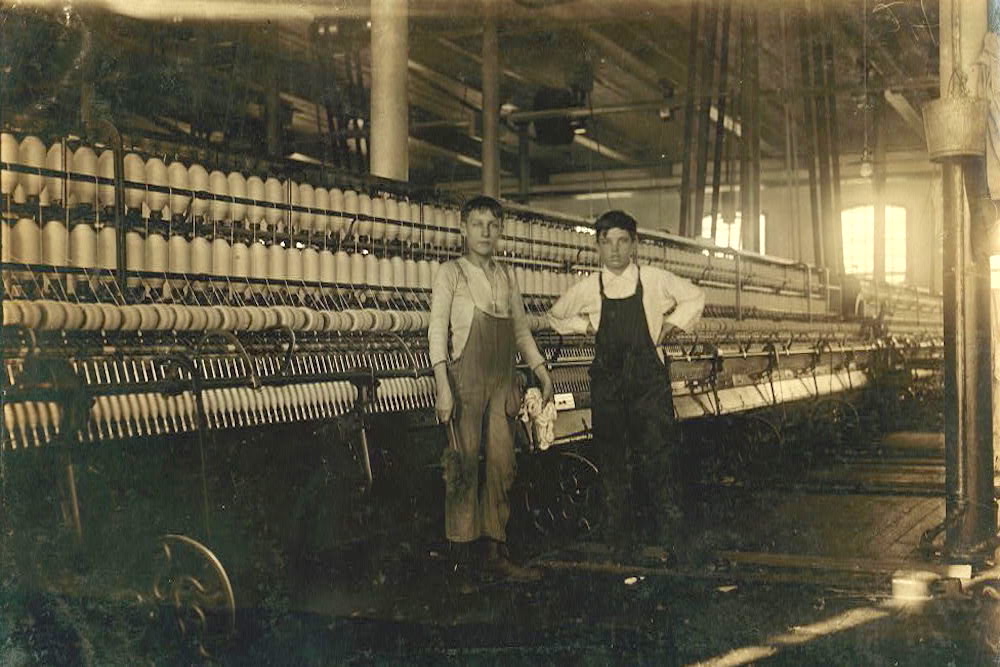 These two young boys worked at Wamsutta Mill, a cotton mill in New Bedford, Massachusetts, in 1912. Courtesy of the Library of Congress.

In 1893, Clare de Graffenried, special agent of the United States Department of Labor, published an article in The Forum describing an invasion of America’s northeastern border. For 30 years, Graffenreid observed, hundreds of thousands of French Canadians had been pouring into states like Maine, New Hampshire, Massachusetts, and Rhode Island, finding work in the region’s burgeoning industries. “Manufacturing New England, Puritan and homogeneous no longer, speaks a French patois,” she wrote.

Furthermore, Graffenreid continued, French Canadian workers huddled in “Little Canadas” of “hastily-constructed tenements,” in houses holding from three to 50 families, subsisting in conditions that were “a reproach to civilization,” while “inspiring fear and aversion in neighbors.”

Within the two years after Graffenried’s piece appeared, both of my grandfathers were born in Maine’s Little Canadas. A century later, when I began researching these roots, I uncovered a lost chapter in U.S. immigration history that has startling relevance today—a story of immigrants crossing a land border into the U.S. and the fears they aroused.

Inheriting an ideology of cultural survival from Québec, the French Canadians in the U.S. resisted assimilation. This led a segment of the American elite to regard these culturally isolated French speakers as a potential threat to the territorial integrity of the United States—pawns, conspiracy theorists said, in a Catholic plot to subvert the U.S. Northeast.

While French-speaking people had lived in North America since the 1600s, the French Canadians Graffenried discussed crossed the U.S. border during the late 19th century, mainly to earn a living in New England’s cotton mills. Cotton textile manufacturing began in earnest in the region during the War of 1812, and by mid-century, it was the U.S.’s largest industry in terms of employment, capital investment, and the value of its products. When the Union blockaded Confederate ports during the Civil War and prices for raw cotton soared, New England’s mills shut down or slashed hours. Textile workers turned toward other industries, joined the army, or headed west.

After the war, with cotton shipping again, the mills reopened, but the skilled textile workforce had scattered. The corporations launched a PR campaign to recruit workers, and Canada’s French-speaking province of Québec answered the call. Before the Civil War there had been a trickle of migration from Québec to the Northern states, but when hostilities ended, trainload upon trainload of French Canadians began to settle in neighboring New England. By 1930, nearly a million had crossed the border in search of work.

These Little Canadas, often wedged between a mill and a Catholic church, formed a cultural archipelago, outposts of Québec scattered throughout the Northeast in densely populated pockets. By 1900, one-tenth of New Englanders spoke French. And in the region’s many cotton mills, French Canadians made up 44 percent of the workforce—24 percent nationally—at a time when cotton remained a dominant industry.

French Canadian workers often lived in overcrowded, company-owned tenements, while children as young as eight years old worked full shifts in the mills. Contemporary observers denounced the mill town squalor. When 44 French Canadian children died in Brunswick, Maine, during a six-month period in 1886, most from typhoid fever and diphtheria, local newspaper editor Albert G. Tenney investigated. He found tenements housing 500 people per acre, with outhouses that overflowed into the wells and basements. Tenney excoriated the mill owners, the prominent Cabot family of Boston. Conditions in the tenements, wrote Tenney, “show a degree of brutality almost inconceivable in a civilized community. … A sight even to make a Christian swear.”

Brunswick was not the only mill town with poor living conditions. Journalist William Bayard Hale visited Little Canada in Fall River, Massachusetts, in 1894. “It would be an abuse to house a dog in such a place,” Hale wrote. Some Fall River tenements, continued Hale, “do not compare favorably with old-time slave-quarters,” a not-so-distant memory in the 1890s.

Inheriting an ideology of cultural survival from Québec, the French Canadians in the U.S. resisted assimilation. This led a segment of the American elite to regard these culturally isolated French speakers as a potential threat to the territorial integrity of the United States—pawns, conspiracy theorists said, in a Catholic plot to subvert the U.S. Northeast.

Other immigrants also faced pitiable conditions, but the French Canadians were unique because they thought of themselves as Americans before they came to the U.S. “The French Canadian is as American as someone born in Boston,” said Civil War hero Edmond Mallet, “it is all the nationalities that emigrated here that truly constitutes the American people.” Mallet was part of the small, educated French Canadian elite in the U.S., which included priests, journalists, professionals, and business owners. In their view, “American” was not a nationality, but a collection of “all the nationalities” living under the Stars and Stripes. In keeping with this understanding, they coined a new term for their people living in the U.S.: Franco-Americans.

Franco-American journalist Ferdinand Gagnon argued in an 1881 hearing at the Massachusetts State House that French Canadians were among the original constituent elements of the American Republic. He cited “Langlade, the father of Wisconsin; Juneau, the founder of Milwaukee; Vital Guerin, the founder of St. Paul, Minn.; Menard, first lieutenant governor of Illinois,” among his compatriots who had founded “nearly all the large cities of the Western States.”

While Gagnon encouraged French Canadians to pursue U.S. citizenship, for him naturalization implied a narrow contract. If naturalized citizens obeyed the laws, defended the flag, and worked for the general prosperity, he felt their duties were discharged—language, religion, and customs could remain in the private sphere. Gagnon’s concept of citizenship was based on Québec’s history, where French Canadians had maintained a distinct cultural identity despite British rule since 1763. The Franco-American elite expected their people to maintain their identity in the U.S. just as they had done in Canada.

But U.S. opinion demanded of the naturalized citizen something more than a merely formal participation in civic life, and Franco-American efforts to preserve their culture soon aroused suspicion and enmity. By the 1880s, elite American newspapers, including The New York Times, saw a sinister plot afoot. The Catholic Church, they said, had dispatched French Canadian workers southward in a bid to seize control of New England. Eventually, the theory went, Québec would sever its British ties and annex New England to a new nation-state called New France. Alarmists presented as evidence for the demographic threat the seemingly endless influx of immigrants across the northeastern border, coupled with the large family size of the Franco-Americans, where 10 or 12 children was common, and many more not unknown.

Anti-Catholicism had deep roots in the Northeast. The region’s Revolution-era patriots had numbered the Québec Act of 1774 among the British Parliament’s “Intolerable Acts,” not least because it upheld the Catholic Church’s privileges in Canada, establishing “popery” in North America. In the mid-19th century, supporters of the Know Nothing movement led attacks on Catholic neighborhoods from New York City to Philadelphia. In New England, among other incidents, a Know Nothing-inspired mob burned a church where Irish and French Canadian Catholics met at Bath, Maine, in July 1854. In October of that year, Catholic priest John Bapst was assaulted, robbed, tarred and feathered, and driven out of Ellsworth, Maine. While the Know Nothings faded away, in the late 19th century the nativists regrouped as the American Protective Association, a nationwide anti-Catholic movement. 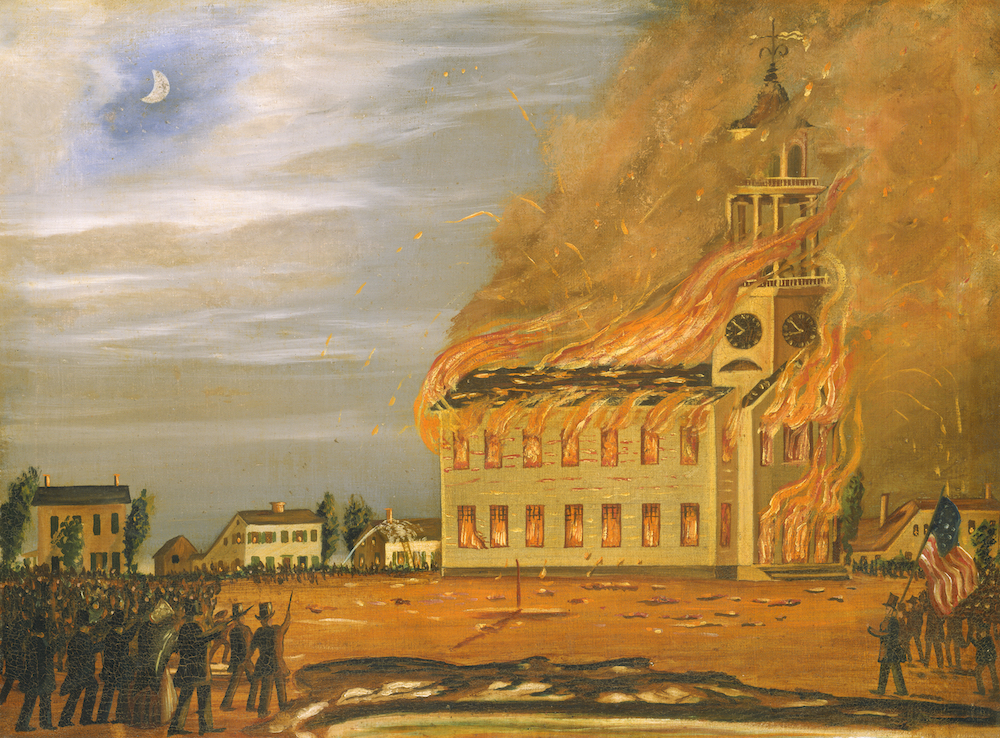 Americans who distrusted their Catholic neighbors burned the Old South Church in Bath, Maine. Painting by John Hilling. Courtesy of the National Gallery of Art.

In this climate, the supposed French Canadian Catholic subversion of New England became national news. Between about 1880 and 1900, as immigration peaked, it attracted coverage in daily newspapers; think pieces in outlets such as Harper’s, The Nation, and The Forum; articles in academic journals; and books in English and in French. The New York Times reported in 1881 that French Canadian immigrants were “ignorant and unenterprising, subservient to the most bigoted class of Catholic priests in the world. … They care nothing for our free institutions, have no desire for civil or religious liberty or the benefits of education.”

In 1885, the paper reported that there were French Canadian plans “to form a new France occupying the whole northeast corner of the continent”; four years later, it outlined the purported borders of New France: “Quebec, Ontario, as far west as Hamilton, such portions of the maritime provinces as may be deemed worth taking, the New-England States, and a slice of New-York.”

And in 1892, The New York Times suggested that emigration from Québec was “part of a priestly scheme now fervently fostered in Canada for the purpose of bringing New-England under the control of the Roman Catholic faith. … This is the avowed purpose of the secret society to which every adult French Canadian belongs.”

Protestant clergy responded by leading well-funded initiatives to convert the Franco-American Catholics. The Congregationalists’ Calvin E. Amaron founded the French Protestant College in Massachusetts in 1885, offering a training course for evangelizing the French Canadians of New England and Québec. Baptist missionaries fielded the “Gospel Wagon”—a hefty, horse-drawn vehicle with organ and pulpit, lit by lanterns at night, preaching Protestantism in French to the Little Canadas of Massachusetts and New Hampshire.

New England had become “a magnet attracting the world to itself. … [Québec is] repellant and shunned by the world’s best blood,” thundered the Baptists’ Henry Lyman Morehouse in an 1893 pamphlet. “The one a mighty current. … that has been as the water of life to the civilized world—the other, a sluggish, slimy stream, that has fructified nothing and given to mankind nothing noteworthy … a civilization where mediaeval Romanism is rampant. … Against the abhorrent forces of this Romish civilization we are contending, especially in New England.”

Amaron and Morehouse identified Protestantism with Americanism. For them, it was unthinkable that the U.S. could accommodate a variety of religious traditions and yet retain its political culture.

In retrospect, the fevered discourse about New England’s class of destitute factory workers reveals how little chattering classes in the U.S. knew their neighbors—a people whose presence in North America preceded Plymouth Rock. The “invasion” rhetoric did not discourage Franco-American sentiments in favor of maintaining their identity but intensified them. The Little Canadas continued in vigor for at least another half-century, and slowly dispersed, not due to nativist provocations, but for economic reasons—the decline of New England’s manufacturing base.

Talk of a French Canadian threat waned in the first years of the 20th century, as migration across the northeastern border slowed temporarily. This Victorian episode faded from memory only when U.S. fears were transferred to new subjects: the even more foreign-seeming Jewish and non-Protestant immigrants from Southern and Eastern Europe, who, in the early 20th century, began to arrive in growing numbers on U.S. shores.