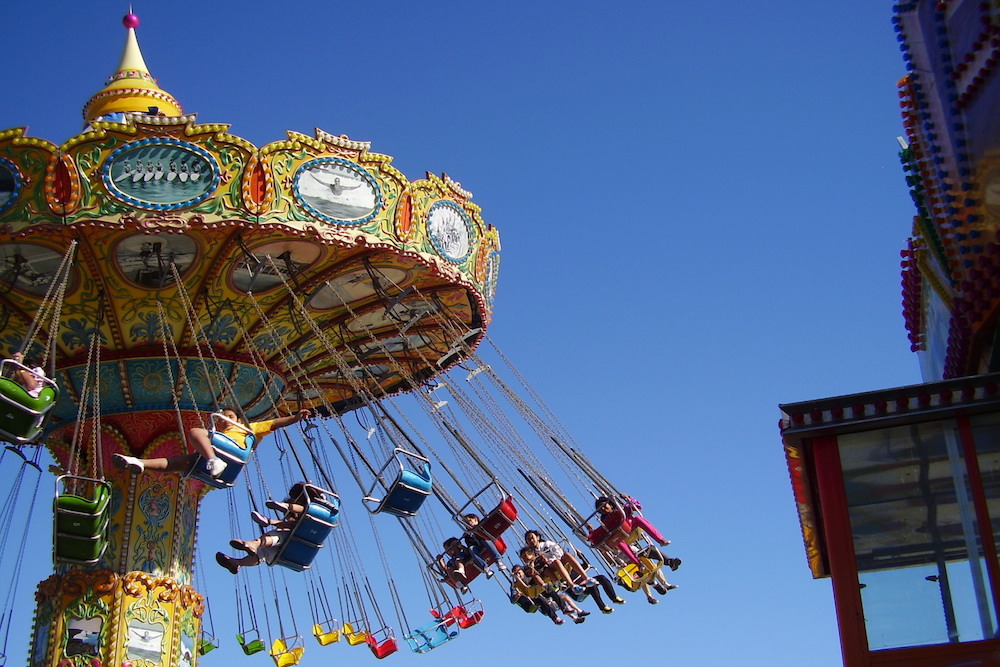 Is Santa Cruz the scariest place in California?

For sure, this state’s 21st-century reality is frightening: from the persecution of immigrants to the droughts and wildfires made worse by climate change. But there is simply no place in our state scarier than this coastal county of 275,000 tortured souls.

Santa Cruz is not our most dangerous or damaged place, but it comes very close to embodying the greatest fears of Californians, which are all about our powerlessness: that our coastal beauty is collapsing underneath us, that we’ve lost control over our future, and that our state’s wealth no longer guarantees anything, not even a roof over our heads.

Perhaps that’s what made Santa Cruz, a pretty place somehow beset by demons, such an effective setting for Jordan Peele’s Us, the year’s most popular horror film. “Being here feels like there’s this black cloud over me,” says the film’s protagonist, a wealthy Bay Area woman (played by Lupita Nyong’o) who summers in Santa Cruz.

She is not the first to feel that way about the place. While Santa Cruz’s shoreline geography makes its mountains tumble violently down to a sea, local history correspondingly sends shivers up your spine. Santa Cruz’s mission is remembered for the murder of Father Andres Quintana, who was strangled to death—and then castrated—shortly after he nearly beat to death two indigenous people whose coerced labor he depended upon.

All the tall trees on those hills cast a lot of shade. In the darkness, trouble thrived, including the cultists of early-20th century Holy City, whose leader practiced bigamy while preaching celibacy, repeatedly ran for governor, and was arrested for writing supportive letters to Hitler. Santa Cruz residents still talk about the two different serial killers who, between them, killed more than 20 people in the 1970s. (One was killing, he said, to appease God’s taste for blood as a way of preventing an earthquake, while the other, the Coed Killer, targeted students).

Even the road into Santa Cruz is fraught: California State Route 17 has so many dangerous sharp turns, blind spots, and narrow shoulders that it’s called “Blood Alley” or “Killer 17.” The mountains separating Santa Cruz from the Bay Area are a leading site of Bigfoot sightings, and they are full of the vacation homes of Silicon Valley technologists who are busy plotting God knows what.

But, as any horror filmmaker will tell you, the scariest threats come not from the rare serial killer or tech overlord but rather from the routines of daily living, which can seem so difficult as to produce feelings of powerlessness.

This may be where Santa Cruz is scariest. Traffic is terrible. Finding a parking space downtown is a fight (and if you find one, you might get ticketed anyway—the meters only take change). And there’s a good chance the other people driving are so high they’re effectively zombies.

Santa Cruz County is consumed with cannabis—more than 20 manufacturers, two distributors, seven cultivators, and even Melissa Etheridge’s new company, Etheridge Farms. It’s telling that, even as other Santa Cruz structures show their age, the shiniest building in town is the KindPeoples Recreational Cannabis Dispensary, on Ocean Street, near the creepy-looking county government building. If Santa Cruzans see weed as a spark for economic opportunity, they are making a Faustian bargain.

Other deals with the devil haunt Santa Cruz, which struggles just to keep what it has. While much of California is vulnerable to drought, Santa Cruz, highly dependent on its own rainfall and waterways, is even more susceptible; another major dry spell could produce damaging water shortages. Climate change and sea-level rise are eating away at its signature shoreline. In 2017, a woman was killed when a cliff collapsed beneath her. (The ocean isn’t much safer—the great white shark population has made a huge comeback).

And if Santa Cruz is going to change course and build a better future, it must do better by its children. By some measures, its rate of child poverty is the second highest—at more than 27 percent—among California’s 58 counties. Santa Cruz is in a particularly perilous position. It has the high cost of living of Bay Area counties with relatively lower incomes, given how many people work in low-wage agriculture and hospitality. Those incomes are often a bit too high for families to be eligible for food stamps and other health programs for the poor. It’s a nightmarish squeeze.

The worst piece of the poverty puzzle involves high housing costs. Santa Cruz has a UC campus that can’t house all its students, who then compete for space in a community that has failed to build enough housing for its year-round residents. The shortage got so bad last year that the university begged faculty members to house students. The middle-class workers that Santa Cruz depends upon often can’t find housing in the county at all; one ranking determined that Santa Cruz was the least affordable housing market in the country for teachers.

And the horror show of homelessness in Santa Cruz is simply too long a story for this short column.

Santa Cruz is in a particularly perilous position. It has the high cost of living of Bay Area counties with relatively lower incomes, given how many people work in low-wage agriculture and hospitality. Those incomes are often a bit too high for families to be eligible for food stamps and other health programs for the poor. It’s a nightmarish squeeze.

If all that wasn’t enough to curdle your blood, Santa Cruz now faces scary new threats from the Trump administration, which has stated its intention to do everything from opening up oil drilling off its coast, to cutting Medicaid for its relatively high percentage of poor people. Already, the workers in Santa Cruz’s agricultural and tourism industries have been aggressively targeted by immigration enforcement. That has forced many of them underground; news broke recently of a secret food bank for undocumented residents and others who fear going to grocery stores or public food banks.

In picking Santa Cruz to tell his horror allegory of a United States that buries its unwanted people deep, the film director Jordan Peele made a wise choice. Us uses the Main Beach, the UC Santa Cruz campus, Big Basin Redwoods State Park, and especially the Beach Boardwalk—and the constant screams from its roller coaster riders—to create fear that at any moment your demons might emerge from the ground beneath you. And there’s nothing much you can do about it.

California taxpayers may also find the film scary. It received $5.2 million in tax breaks from California’s Film & Television Tax Credit Program, which provides subsidies for films made in California. Studies suggest that such subsidies can’t be financially justified. And Us, which made $254 million worldwide, didn’t need it. Such tax giveaways, which steal from the poor and give to the rich, illustrate why California’s budget feels like an out-of-control carnival ride.

Peele is not the first filmmaker to identify the scariness in the soul of Santa Cruz, which was also the setting of the 1987 vampire movie, The Lost Boys.

On my own recent visit, I didn’t encounter any vampires—or any of the red-clad doppelgangers who emerge from tunnels beneath the boardwalk in Peele’s movie. But I was scared nonetheless. Santa Cruz is California’s hall of mirrors. If you stare at it, beware: you’ll soon find our state’s most terrifying problems looking right back at you.