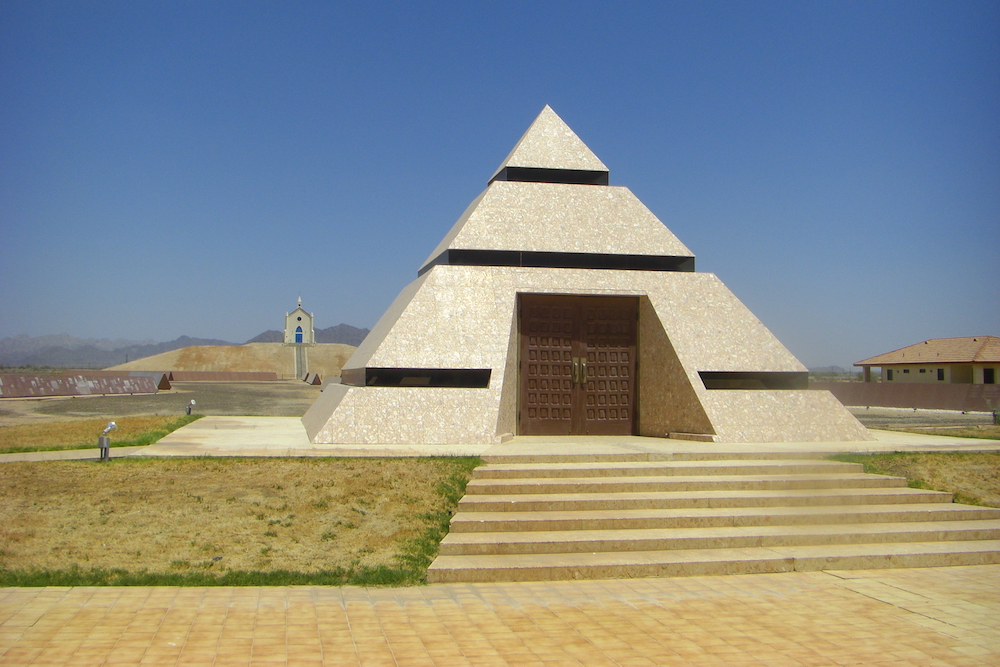 Pyramid that houses the world’s official center point at The Center of the World in Felicity, California. Courtesy of Wikimedia Commons.

This seeming paradox goes a long way towards explaining how California became so central to the culture and economy of the Earth. As a matter of planetary geography, our state is in the middle of nowhere, on the hot and dry edge of a lightly populated continent, and thus Californians have always had to work harder to connect ourselves to other parts of the world.

I found myself pondering this while visiting the Center of the World, which is in the Sonoran Desert in the southeast corner of California, a few miles west on Interstate 8 from Yuma, Arizona.

The Center of the World is an official designation, bestowed upon the tiny town of Felicity by a number of authorities, including the French government (specifically its Institut Géographique National) and the Imperial County Board of Supervisors. But the Center of the World is also an invention of the town’s founders Jacques-André Istel and his wife Felicia Lee, for whom Felicity is named.

Their story is a complicated California caper, too long to tell here. But the short version focuses on Jacques-André, a French refugee to the U.S. and Marine lieutenant colonel who made such a reputation in parachuting that he’s called the “father of American skydiving.” Parachutists are forever looking for out-of-the-way places where there are few neighbors to complain about low-flying planes and the people jumping out of them. And so, some decades ago, Jacques-André acquired about 2,600 acres of land in the California desert.

In 1985, Jacques-André authored a children’s book about a good dragon, named Coe, who lived at the center of the world. By the following year, the town had been formed, with Jacques-André elected mayor by a 3-0 vote. (Don’t tell voter-fraud conspiracy-mongers, but the third vote was cast by the fictional dragon).

Over the years, the couple has built Felicity into a settlement that is part shrine, part art installation, and part museum. They started with a pink, mirror-lined pyramid in the desert that is legally—according to the official declarations they sought out—the world’s center. They’ve added a post office, a church, a sundial inspired by Michelangelo’s arm of God in The Creation of Adam, and an entry sculpture consisting of a staircase that was once part of the Eiffel Tower.

The Center of the World bills itself as a memorial to “the collective memory of humanity.” And the soul of the project is a Museum of History in Granite, which consists of a growing number of stone monuments, arranged in the pattern of a compass rose, that detail much of human history, including histories of California, Arizona, the United States, and French aviation. The histories are concise, learned, and whimsical, covering transformational figures from Lao Tzu to Julia Child. In a description of literature, Groucho Marx is quoted, “Outside of a dog, a book is a man’s best friend. Inside of a dog, it’s too dark to read.”

That all might sound kitschy, but this is not a tourist trap. It’s a dry, hot, and quiet place that invites laughter and head-scratching—and also deeper contemplation. The Center of the World poses questions about humanity, the value of our many achievements, and how vulnerable our progress may be.

Once I’d reached the Center of the World, my own thoughts were about California.

We Californians think of ourselves as being at the center of all great human enterprises—from technology to space exploration. But in reality, we are a province that is hot and dry and far away from the centers of population and power.

The world’s largest ocean—and 14 hours of flying—separates us from the 4.5 billion people who live in Asia. Most of North America and yet another ocean keeps us from Europe and Africa. Most of the continental U.S., and some imposing mountain ranges, protect us from the mandarins who rule our own nation’s centers of political and financial power.

We are closer to Mexico City than we are to Washington, D.C., making us a rare place. Indeed, the other people on Earth who reside further from their national capitals than we do tend to inhabit famously remote places—Siberia, China’s western deserts, the farthest reaches of Brazil’s Amazon, and, of course, Alaska and America’s various Pacific islands.

One way to look at California history is as an endless campaign to bridge the distances created by our unfavorable geography. We are always manufacturing moments, opportunities, new industries—the gold rush, the oil boom, the citrus boom, Hollywood, Silicon Valley—in order to convince people in other parts of the world to make the excruciatingly long journey here. The fact that most of our sales pitches for California have been overhyped, and the new arrivals quickly disappointed, hasn’t been a problem. We’ve learned that if we can con people into coming here, they are unlikely to leave, especially when they consider how long their voyages home will be.

So, instead of fleeing, these new California arrivals stick around and create different innovations that all share the same mission: obliterating the distance that physically separate humans. Our technologies allow you to be at work in London and look after your kids or your cat in San Francisco. Our entertainment created a common set of images, songs, and stories that could be enjoyed around the world. Our agriculture makes it possible to get an almond or avocado just about anywhere on Earth.

For better and for worse, our state’s nowhereness has inspired us to turn the whole world into nowhere—or, to put it another way, to make the world more like California.

One way to look at California history is as an endless campaign to bridge the distances created by our unfavorable geography.

As I stood out in the desert, the idea that a pyramid in Imperial County was the Center of the World at first seemed like a stretch. But then I reconsidered. Is the Center of The World any more contrived than the notion that you could create a capital of magical moving pictures in a town that lacks water? Or that dingy suburban garages on the San Francisco peninsula would be laboratories for technologies that could change the world?

It takes fantastical visions to get people to cross borders, especially those policed by hostile guards. When I stopped at the Center of the World, the only other people I encountered were Border Patrol agents, driving by. They, and a clearly visible border fence, were just a couple more obstacles for Californians to overcome in our shared project of luring ambitious people from elsewhere.

Of course, it is a scientific fact that any point on the Earth surface’s might be considered its center, since we live on a near-perfect sphere. The genius of the Center of the World is that it manages to both deny that fact and to ratify it, by its very existence.

At our best, we Californians are people who know that it doesn’t much matter whether you really stand at the center of the world. All that really matters is whether you can convince the rest of the world that you do.