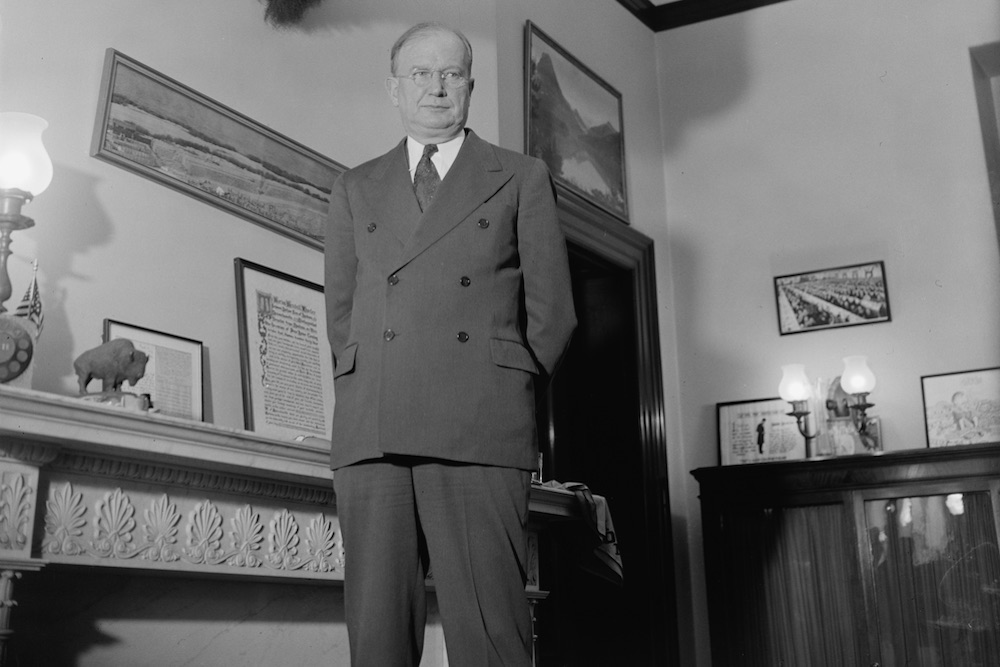 This photograph of Sen. Burton K. Wheeler was taken in his office at the Capitol in December 1939. Courtesy of the Library of Congress.

There is an old line that “Montana is really just a small town with a very long Main Street.” It’s a state with 147,000 square miles and just over a million people, yet everyone seems to know everyone, or at least everyone knows someone who knows someone you know. The six degrees of separation in Montana are rarely more than two degrees.

Montana’s small-town dynamic, combined with sprawling geography and a rich and often-rough history, have shaped a political culture that is highly independent, even by the standards of an America that values independence. Montana is a natural idyll where mining companies have set the agenda; a sometimes-jingoistic place that elects famously outspoken pacifists; a haven for Republicans and Democrats alike (and even Communists, at one point in its history.) It’s almost as though the state had to create a complex, contradictory, confusing, and occasionally crazy political culture to equal its vastness and to complement its uniqueness.

The story of Montana’s independence starts with an odd bit of dependence: For nearly 75 years the state’s economy was dominated by a gigantic multinational corporation, the Anaconda Mining Company—properly named after the giant snake, since Anaconda maintained a stranglehold on the state’s politics. When Montanans referred to “the Company,” everyone instantly knew what they were talking about. In the early 20th century, three-quarters of all wage earners in Montana directly or indirectly owed their livelihood to the Company.

Anaconda owned most of the copper mines in Butte. It also owned copper and zinc concentrators, various plants and smelters, and facilities in Utah, Arizona, New Jersey, Chicago, and eventually South America. The Company’s leadership overlapped with Montana Power Company, another pervasive force in the state’s economy, to such a degree that Montanans referred to the economic giants as “the twins.” Montana’s economic overlords made certain corporate taxes were low or nonexistent, while unions were harassed, ignored, or forced out of existence. To intimidate workers or influence political decisions, on several occasions Anaconda suddenly shut down its operations, throwing thousands out of work.

The twins at one time controlled most of the significant newspapers in Montana, eliminating any notion that an independent press might check corporate or political excess. Politicians and causes enjoying Anaconda’s favor received lavish and positive attention; the company’s foes were ignored. Both companies also had wide-ranging and often-nefarious influences on Montana politics, with their lobbyists using threats, money, whiskey, and other inducements to dominate the Statehouse. Little wonder that preeminent Montana historian K. Ross Toole considered Montana a “plundered colony,” or that the state’s elegant storyteller Joseph Kinsey Howard thought of Montana “as an object lesson in American domestic imperialism.”

Montanans challenged that imperialism. The state’s farms, mines, and forests attracted a diverse immigrant population; “no smoking” signs in Butte’s mines appeared in a dozen languages. Eventually, Montana’s working class, having been abused enough, pushed back against Anaconda, embracing strikes, labor violence, socialism, communism, and the radical, farmer-led nonpartisan movement. Prior to World War I, Butte had a Socialist mayor who was impeached, and then stabbed by an assailant who he, in turn, shot and killed. Montana’s “red corner,” the far northeastern part of the vast state, elected candidates who ran on the Communist Party ticket.

The story of Montana’s independence starts with an odd bit of dependence: For nearly 75 years the state’s economy was dominated by a gigantic multinational corporation, the Anaconda Mining Company—properly named after the giant snake, since Anaconda maintained a stranglehold on the state’s politics.

This history of independence, even contrariness, has unquestionably contributed to Montana’s propensity to produce larger-than-life political figures, none more significant than Burton K. Wheeler, a United States senator from 1923 to 1947. Wheeler identified as a lifelong Democrat, but was also among the most independent politicians that Montana, or the country, has ever produced. Upset with his party’s conservative tack in 1924, Wheeler ran for vice president as Republican Sen. Robert LaFollette’s running mate on the Progressive Party ticket. The pair lost, and Wheeler returned to the Democratic fold, becoming the first member of the Senate to endorse Franklin Roosevelt for president—then sparring constantly with FDR, most effectively over Roosevelt’s failed 1937 proposal to “pack” the Supreme Court.

Wheeler came of age in Butte, the boisterous mining town of union halls and vaudeville theaters. It’s the kind of place where, as Wheeler often recounted, the best way for a politician to campaign was to stroll into a tavern and buy a round for the house. Political survival in such a diverse, confrontational political culture, where so many harbored ill-concealed disgust for too much power in too few hands, required an uncanny ability to navigate contradiction and fend off controversy. Wheeler excelled at that. Candor and a common touch also helped. Wheeler always refused to trim his opinions or waffle on his ideals, even when faced with stiff opposition; constituents didn’t care for his stand against Roosevelt’s court-packing scheme, for example.

The senator’s foreign policy views, once broadly embraced in Montana, never moderated or evolved as many of his constituent’s attitudes did. Wheeler was an anti-war “peace progressive,” opposed to American military intervention, who worried that the United States was destined to become the world’s policeman. Wheeler’s isolationism, or as he preferred, “non-interventionism,” was a product of several factors, including the influence of his Quaker mother and experiences he had had as a young man serving as U.S. attorney in Montana during World War I.

One historian has called this period “Montana’s agony.” A dangerous patriotic zealotry swept over the state. Wheeler was outraged by the still unsolved 1917 murder of labor organizer Frank Little, a crime Wheeler believed was committed by agents of the Anaconda Mining Company. State officials arrested, tried, and imprisoned dozens of citizens under its sedition law; civil liberties were essentially suspended. The state outlawed teaching the German language. It banned public demonstrations. As U.S. Attorney Wheeler steadfastly refused to succumb to the climate of hysteria, defending free speech and declining federal prosecution of Montanans who were merely dissenting against war. His patriotism, like other forms of dissent, came under attack as anti-American, and he was forced to resign as U.S. Attorney in 1918. 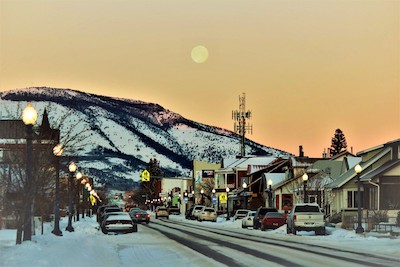 Photograph of a winter scene on Commercial Avenue in Anaconda, Montana. Courtesy of Mark Holloway/Flickr.

Wheeler’s political career recovered and thrived, but the experience deepened his opposition to war and convinced him that the U.S. should remain apart from European rivalries. Wheeler believed that Great Britain could fight Nazi Germany alone, and he opposed every element of Roosevelt’s pre-Pearl Harbor foreign policy, earning—and frequently deserving—FDR’s animus. Critics (wrongly) accused Wheeler of anti-Semitism and pro-Nazi sympathies because of his close identification with the controversial America First Committee; in fact, he frequently expressed his hope that Britain would win the war—just without U.S. help. Wheeler’s motive was always his pacifism, shared with fellow Montanan Jeannette Rankin, a pioneering congresswoman who opposed U.S. declarations of war in both 1917 and 1941. Twenty years after the 1947 defeat that ended his political career, Wheeler was still publicly blasting U.S. foreign policy, and particularly American involvement in Southeast Asia.

Montanan independence didn’t end with Wheeler. Michael Mansfield served in the U.S. Congress from 1943 to 1977 and still remains the longest-serving Senate majority leader in history. A history professor who also had deep connections to Butte, Mansfield became the Senate’s expert on U.S. foreign policy in Asia, and tried without much success to alter Lyndon Johnson’s Vietnam policy. He quietly helped steer the Voting Rights Act through Congress and openly supported gun registration legislation in 1968 after the murders of Martin Luther King Jr. and Robert Kennedy. When warned that his gun control position would impact his re-election chances, Mansfield told a reporter: “I made my decision on the basis of my own conscience and my own responsibility … I am willing to take the consequences.” He easily won re-election in 1970.

Mansfield also had the common touch, and it endeared him to generations of Montanans in both political parties, who simply referred to him as “Mike.” As his biographer Don Oberdorfer has related, a typical Mansfield campaign day involved driving from one Montana town to the next, walking Main Street, shaking hands along the way. On other occasions he would sit alone in a coffee shop or café, smoking his pipe and waiting for someone to approach with a question or comment.

Charles Johnson, a longtime Montana political reporter, was a rookie on the Missoulian in the early 1970s when he was called into the newsroom on a Saturday night to interview the Senate majority leader, who had come to town unannounced. Johnson asked Mansfield how the Paris peace talks aimed at ending the Vietnam War were going. Mansfield asked to use the telephone and returned with an update on the talks. The senator had called Henry Kissinger, Richard Nixon’s national security advisor, and a rookie reporter broke national news, thanks to a Montana senator who was a big deal in Washington, D.C., but just Mike in Missoula.

There were others who bucked expectations, too. In the early 20th century, Montana voters sent Thomas J. Walsh to the Senate, a dogged investigator who unraveled the scandal known as Teapot Dome. Jeannette Rankin, the first woman to serve in Congress, was elected four years before the women’s suffrage amendment was added to the Constitution. More recently Sens. James Murray, Lee Metcalf, and Max Baucus left major marks on American politics, as did progressive Democrat Rep. Pat Williams.

Few other small-population states can match Montana’s record for genuine national political leadership. As University of Montana political scientist Robert Saldin, a frequent analyst of the state’s politics, says, “Montana politics is resistant to the familiar labels—Republican, Democrat; liberal, conservative—that define national politics. Before those identifiers begin to count, candidates have to pass the ‘Montana cred’ test: Are you one of us? Do you look the part? Do you love this place sufficiently?”

It’s no wonder the 100 delegates who in 1972 redrafted Montana’s original 1899 constitution—all private citizens, no elected officials allowed—hearkened in an eloquent preamble to “the quiet beauty of our state, the grandeur of our mountains, [and] the vastness of our rolling plains” as they set about “securing the blessings of liberty for this and future generations.” As historian Harry Fritz has noted, the “Constitution was a monument to a new, urban Montana,” with renewed focus on “power to the people, prosperity, and protection of the environment.”

This Montana-ness retains its power today. Montana voted for President Donald Trump in 2016. But despite repeated attacks from the president during his frequent visits to Montana during the midterm campaign, Democratic Senator Jon Tester won re-election in 2018. Republicans dominate the state legislature, but the state has a Democratic governor, Steve Bullock.

He is running for president—very much in the Montana independent tradition.