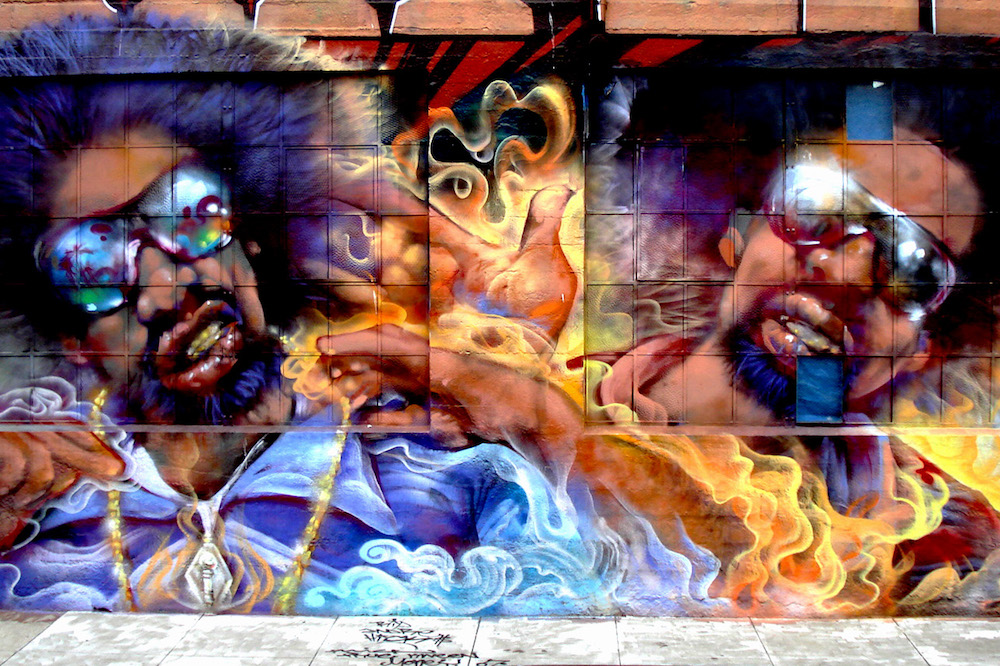 Vallejo rapper Mac Dre, depicted in a memorial mural painted by members of the ICP Crew in San Francisco. It has since been painted over. Photo courtesy of A Syn/flickr.

Conventional wisdom is that California’s greatest art is produced by collisions between the different peoples and cultures in the centers of our biggest cities.

But if that’s true, how did Vallejo become the state’s creative capital of hip hop?

The small North Bay city of 120,000, in rolling out generations of acclaimed rappers, makes the case that, in our era of hyper-connectivity, the isolation of life on the outskirts can be an especially powerful and distinctive form of artistic inspiration.

Indeed, most of Vallejo’s long line of rappers—from Mac Dre and E-40, who came to prominence in the late 1980s, to the new group SOB x RBE, which broke out internationally with a standout song on the Black Panther soundtrack—come from the same out-of-the-way hilly neighborhood, Country Club Crest.

“The Crest,” as it’s known on thousands of recordings (it’s also a more accurate name because there’s no country club), is small, with fewer than 10,000 people in a suburban-style community of single-family homes. But it sits on the far northern edge of the city, up against the Napa County border, cut off from the rest of Vallejo by Highway 37 and Interstate 80. The neighborhood has remained determinedly African American in a city that has become notable for being one of California’s most mixed places (Latinos, non-Hispanic whites, Asians, and African Americans each comprise at least 20 percent of Vallejo’s population).

That sense of separation makes The Crest a self-contained hothouse of conversation. On a recent visit, I wandered into intense talks between neighbors at Dick Bass Park, in front of King’s Supermarket, and on several sidewalks where people were working on their cars.

And the city of Vallejo has given its citizens plenty to talk about, with municipal ups and downs as dramatic as the colorful rollercoasters of Six Flags Discovery Kingdom, the theme park that borders, and looms over, The Crest.

The neighborhood was settled after the Second World War by African Americans who were looking to buy homes. But the middle-class aspirations of The Crest have been repeatedly challenged—by drugs and gangs in the 1980s, by the economic wallop when nearby Mare Island Naval Shipyard closed in the 1990s, and by the Great Recession and housing crisis of the 2000s, which hit especially hard in the Bay Area’s outskirts.

There is a bittersweet side to hip hop’s connection to Vallejo. When hometown artists rap about the city, they express pride in being from Vallejo, and having survived its poverty and crime, but less pride in Vallejo.

The recession also produced a civic trauma that defined childhood for today’s rising generation of rappers: the city of Vallejo’s bankruptcy, which lasted from 2008 to 2011. The bankruptcy was precipitated by the city’s economic decline and by the unsustainably high retirement benefits of Vallejo firefighters and police officers. In an effort to dig itself out, the city chose to protect its own employee’s pensions, balancing the books by making huge cuts to government services and the city jobs upon which many Vallejo residents depended.

For all the damage these disasters wrought, they also have inspired Vallejo’s rappers. The seminal figure of Vallejo rap was Mac Dre. His groundbreaking records established the “hyphy movement,” which addressed life’s difficulties with hyper, flashy, humorous, dance-friendly beats, perfect for partying with his drug of choice, “thizz,” or ecstasy.

Mac Dre was generous in supporting local rappers and building a homegrown music culture. In the process, he came to define Bay Area hip hop in opposition to Southern California. While L.A. rappers style themselves as gangsters (high and mighty and corporate because of the proximity to Hollywood), Bay Area rappers were hustlers: sweeter, idiosyncratic, more entrepreneurial (starting your own small label was celebrated)—and thus more relatable, since California is a state full of hustlers.

Since he was shot to death in 2004, at age 34, Mac Dre has become an even bigger figure—a regional patron saint—whose ethic of mutual aid is best embodied by his legendary contemporary E-40, who still serves as a mentor to up-and-coming rappers from Vallejo and the Bay.

There is a bittersweet side to hip hop’s connection to Vallejo. When hometown artists rap about the city, they express pride in being from Vallejo, and having survived its poverty and crime, but less pride in Vallejo. Rappers have taken on everything from the bankruptcy to the housing crisis (one young rapper, Benny, often recounts his decision to stay in Vallejo and live in a car after his family was evicted from their home and moved to Sacramento.)

Rappers have been particularly critical of the city’s police department (all the way back to Mac Dre, who declared that “the biggest gangstas are on the VPD”)—and with good reason. Statistics show that Vallejo police have one of the highest rates of fatal police shootings and police use of force in the state. And examples of police shootings from Vallejo—including last year’s killing of a rapper, Willie McCoy, who fell asleep in a Taco Bell drive-thru—helped drive the successful push in the legislature for a new statewide legal standard on police conduct.

All the rapping about Vallejo’s problems does rankle some locals, who point out the rhymes are often scarier than the reality. (There were just six homicides in Vallejo in 2018, down from 18 the previous year).

But the Vallejo of rap music is a winner with audiences and critics. Last year, the New Yorker magazine named SOB x RBE’s song “Paid in Full” one of its 10 top songs of 2018, praising the “delightful, prancing spite” of that group of Vallejo teenagers, who produced their first songs on a PlayStation. Today, SOB x RBE are performing across North America and offering a faster, more freewheeling updating of the style forged by their Vallejo forbears. The group has a special ability to make stories of rough circumstances sound like fun.

Another young rapper from Vallejo, Nef the Pharaoh, has argued that this gift of gab is characteristic of his hometown.

In a chorus from his album “Fresh Outta Space 3,” Nef made explicit his theory of Vallejo: when you’re from the littler place on the outskirts, you do what you must to make sure you’re not ignored.

Big trucks, big grills
I just bought my baby boy a big wheel
My city’s small and I’m big, now that’s trill
When they ask how I live?
Everything big