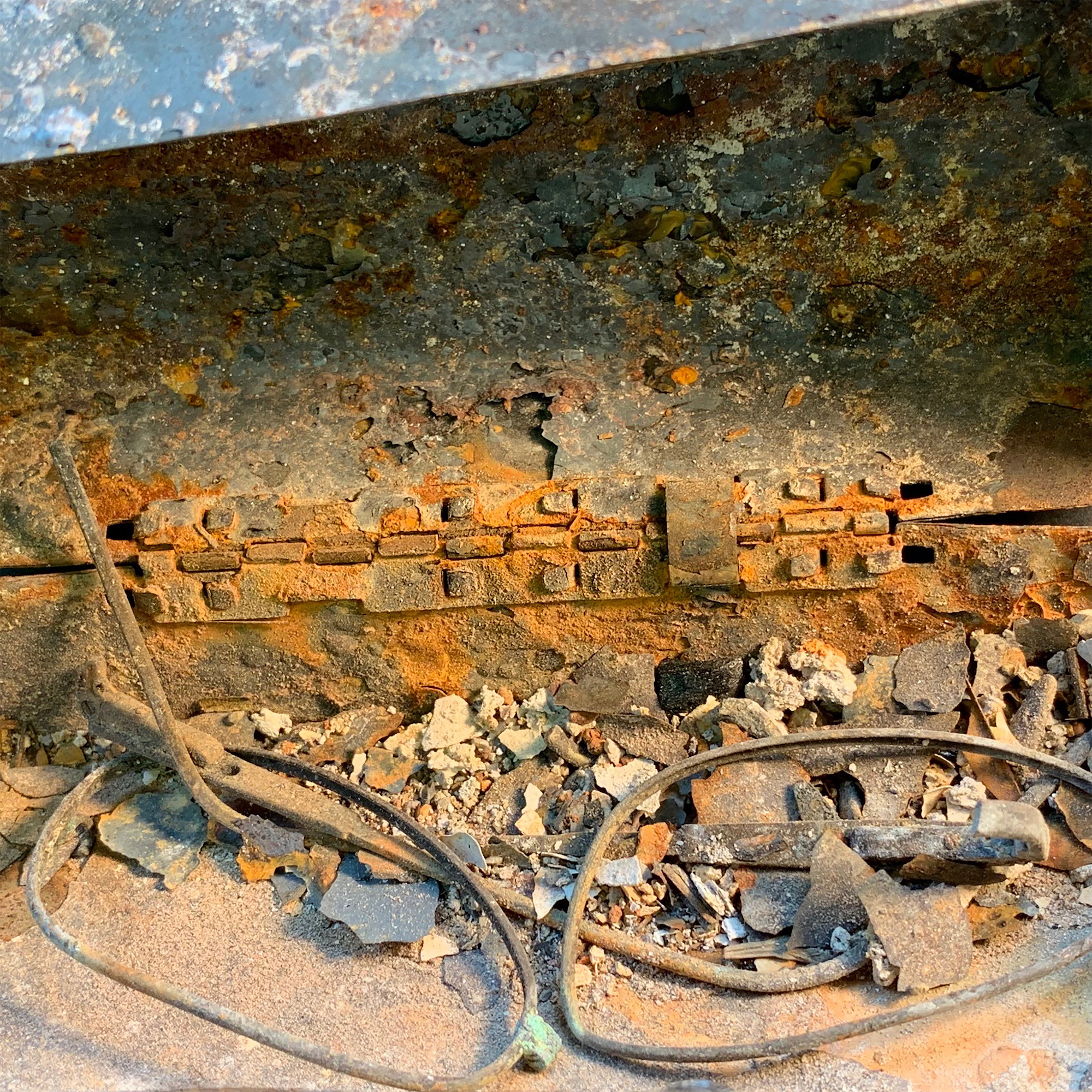 Spectacles Glasses from some other century survive in a case, glass gone. Courtesy of Stephanie Taylor. 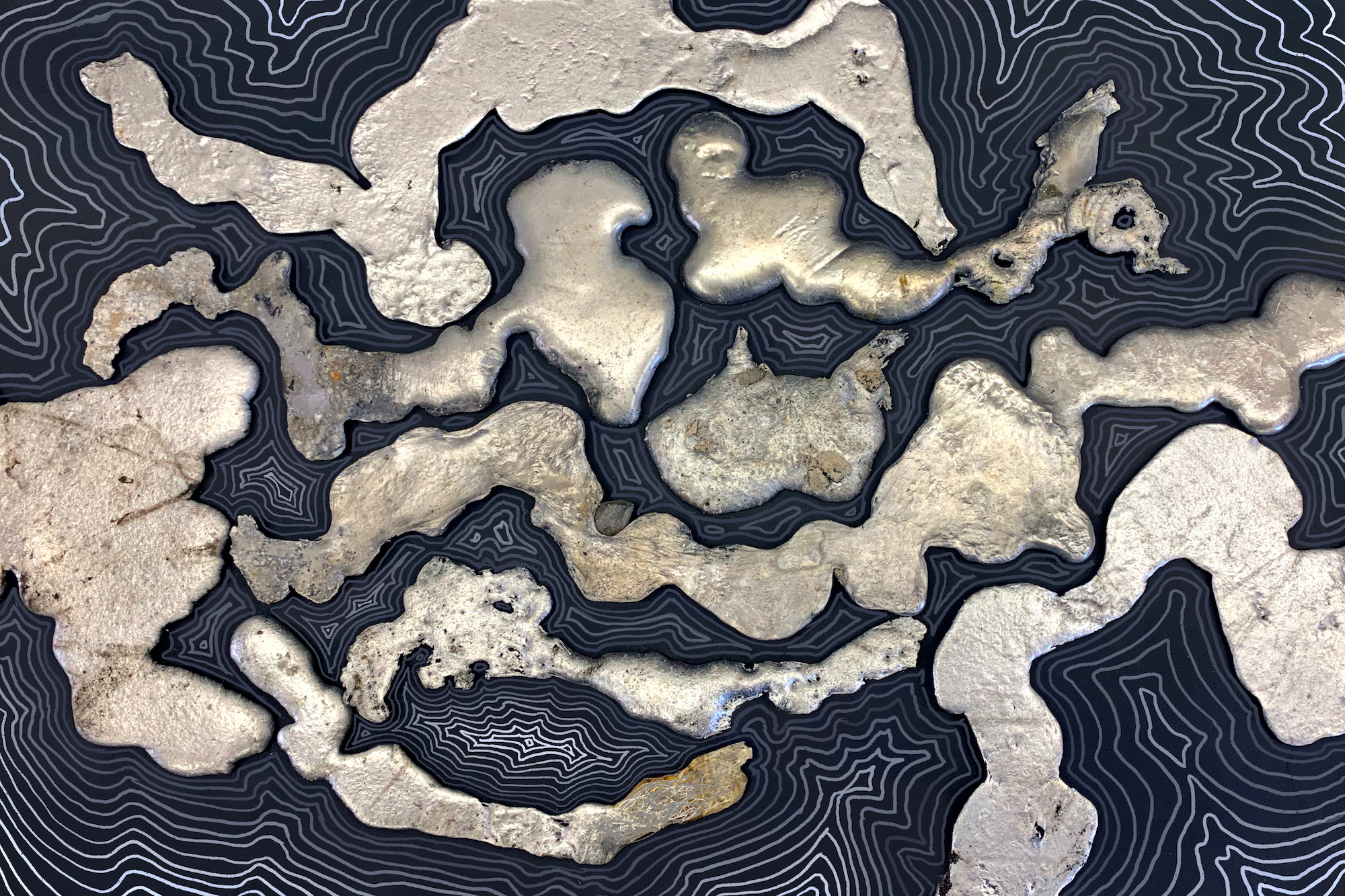 Melted Hubcaps All over Paradise, aluminum hubcaps melted, flowed from wheels, and re-formed on the ground. Taylor collected several, brought them to her studio and captured an image. In the spaces between the forms, she drew lines, and a new sort of topography emerged. Courtesy of Stephanie Taylor. 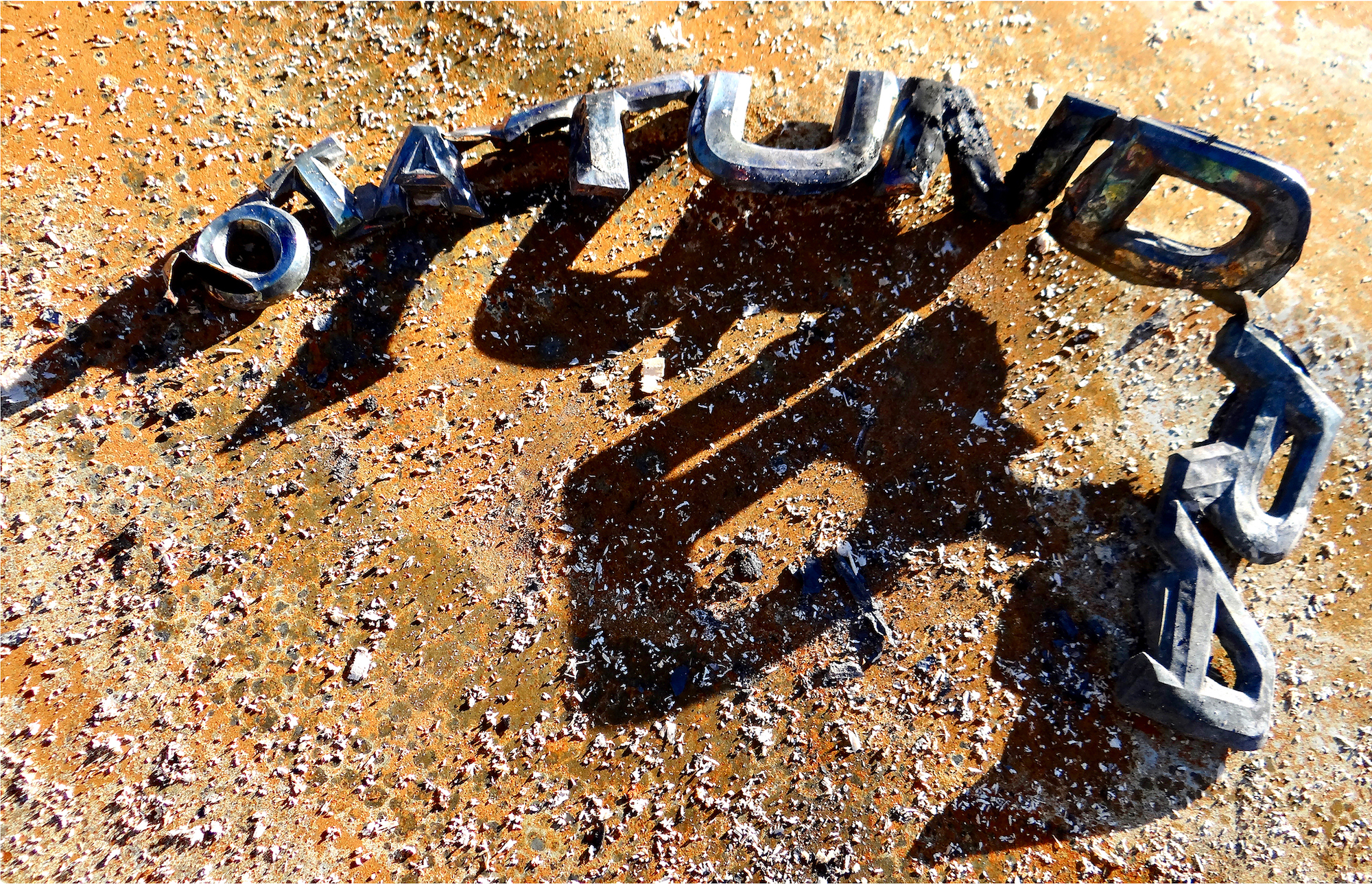 Toyota Tundra January sun highlights a logo, picked from ashes and placed across the hood of a beloved truck. Courtesy of Stephanie Taylor. 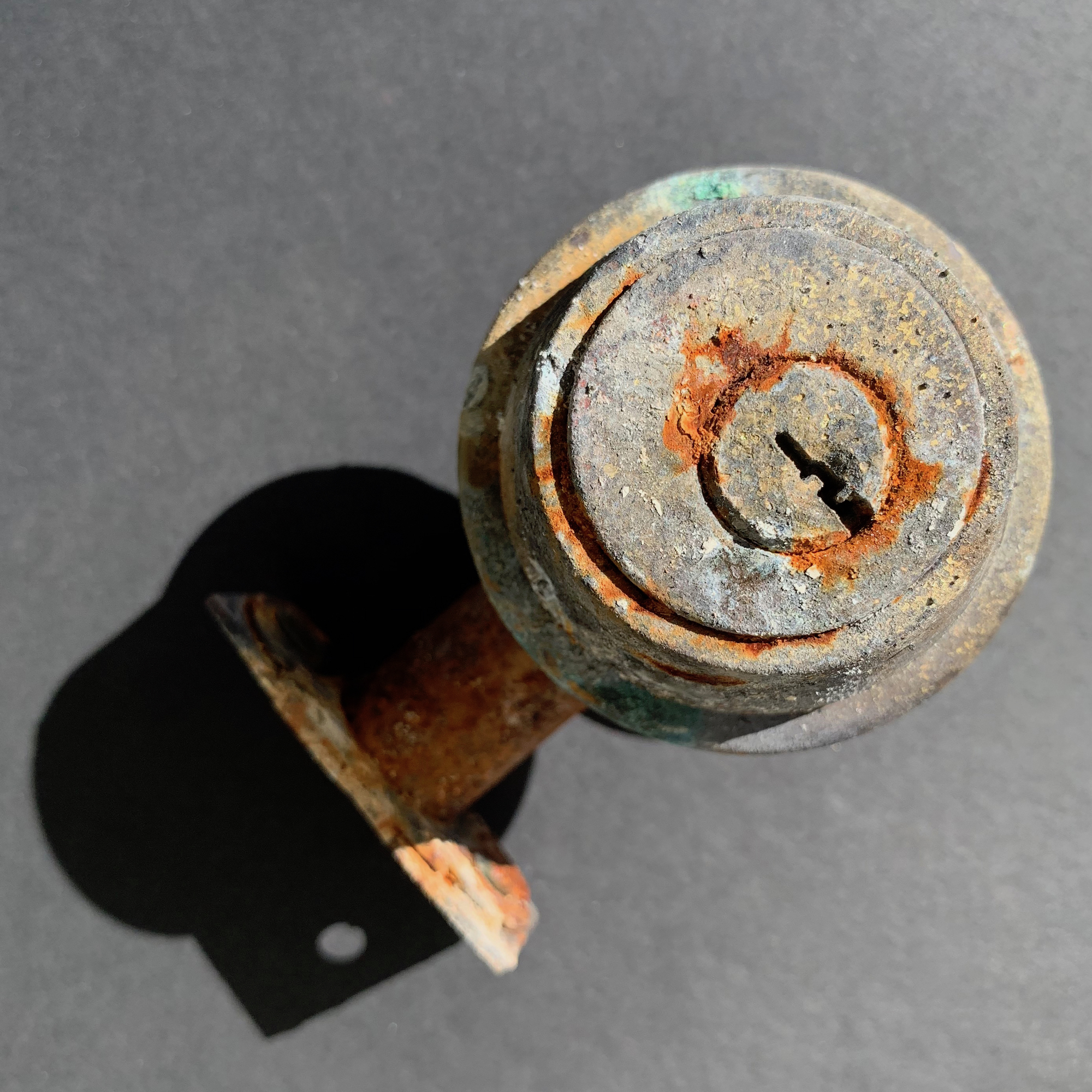 Front Door Lock All that remains of the front door to Christy’s grandparents’ home. Courtesy of Stephanie Taylor. 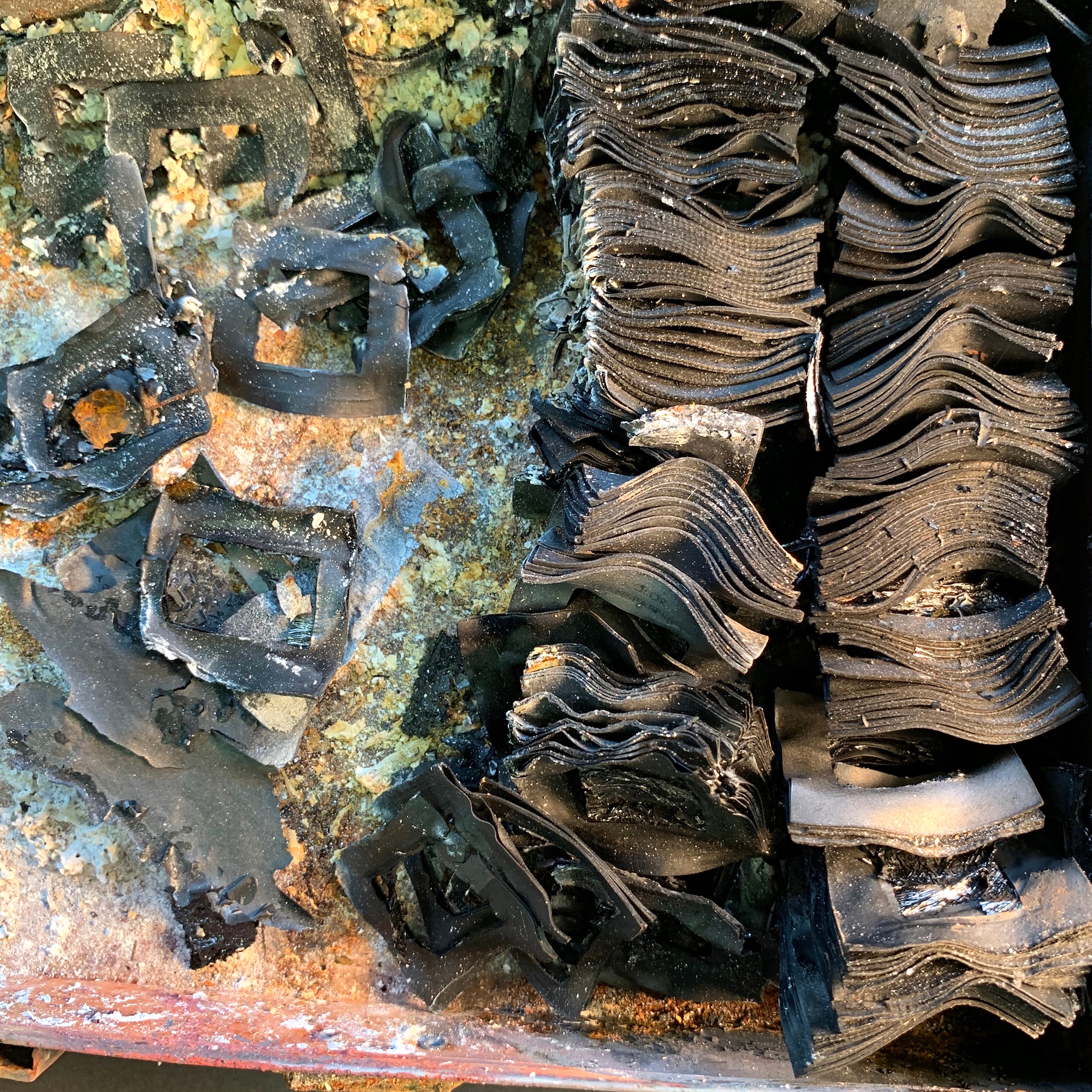 Slides from Alaska Slides from a treasured trip—so tightly packed that some survived, but the images are gone. Courtesy of Stephanie Taylor. 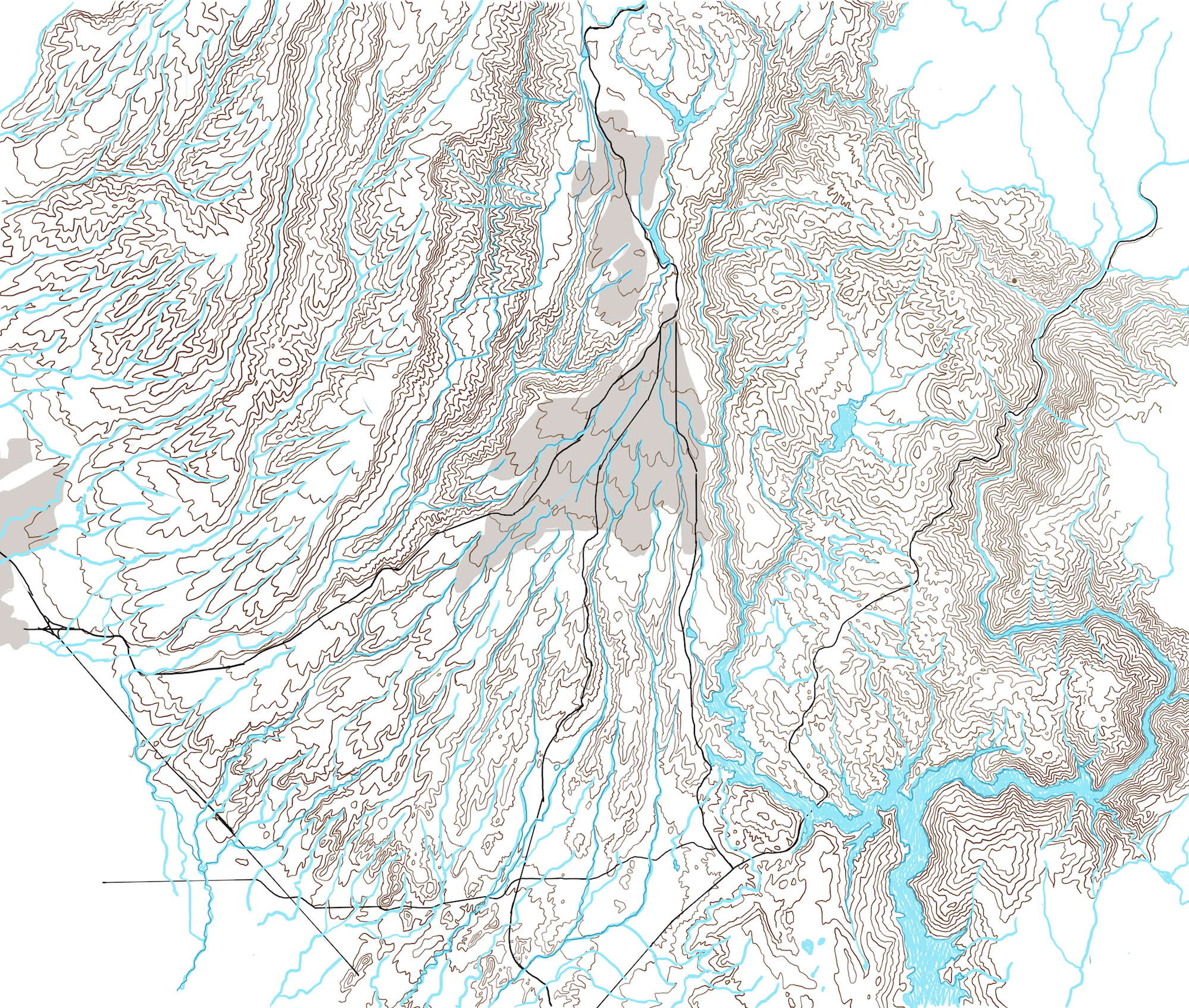 Topography of Paradise Area Lines of landforms contain a sensuality, as if Taylor were drawing her pencil across a physical body, of mountains, canyons, and watersheds. Courtesy of Stephanie Taylor. 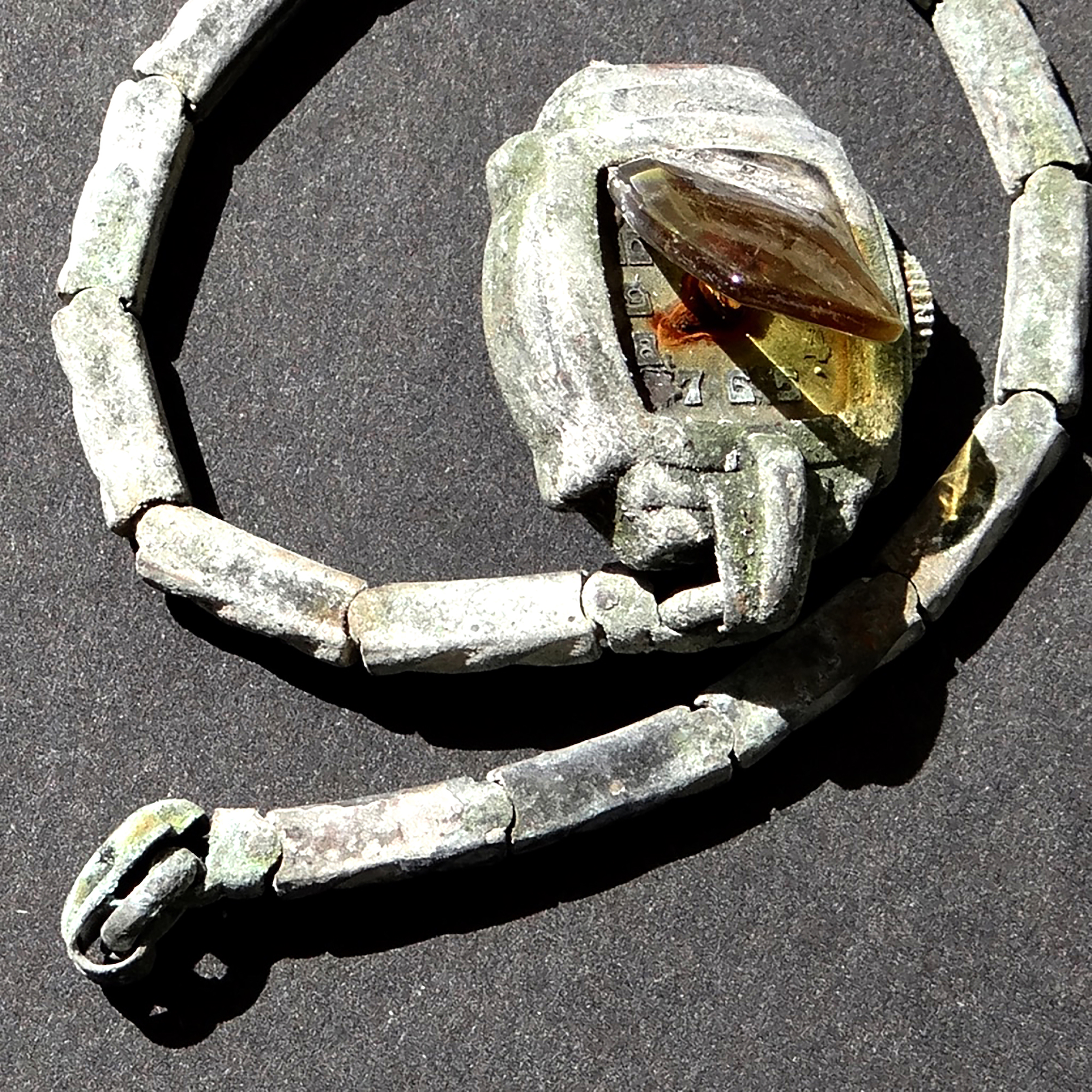 Time’s Up A lady’s delicate watch. Courtesy of Stephanie Taylor. 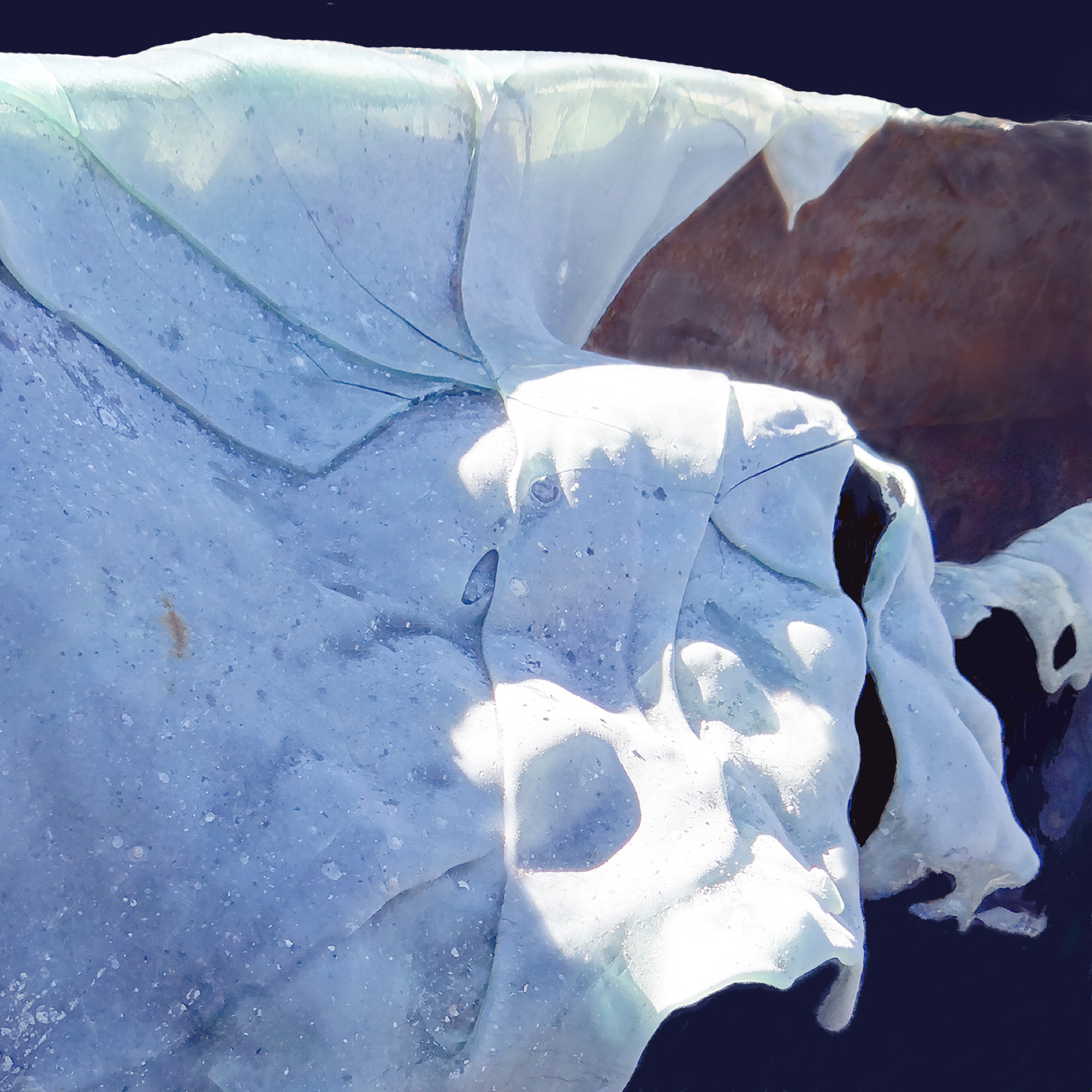 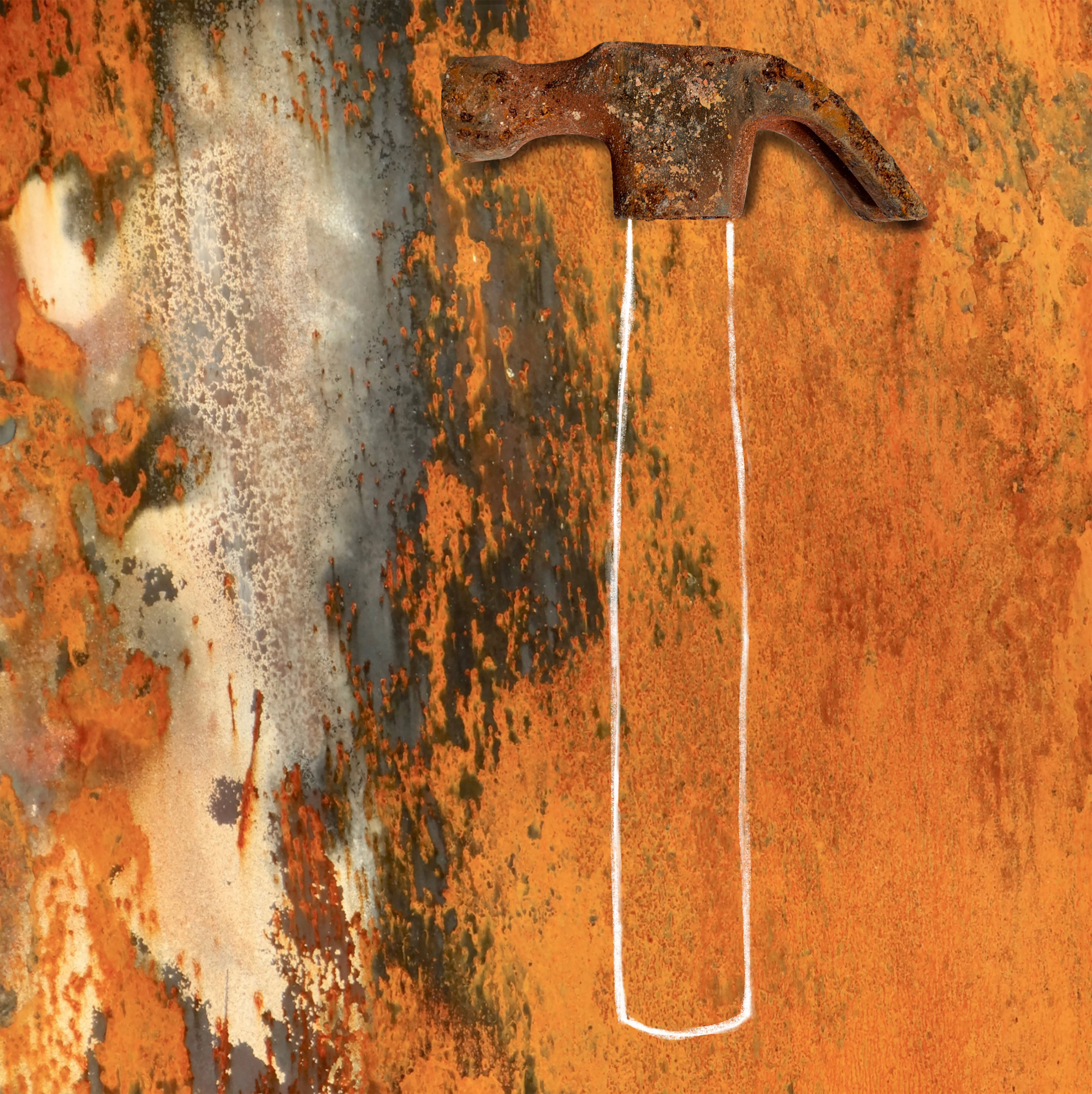 Hammer Head with Texture Taylor carried this rescued object, no longer a hammer, around for days. Courtesy of Stephanie Taylor. 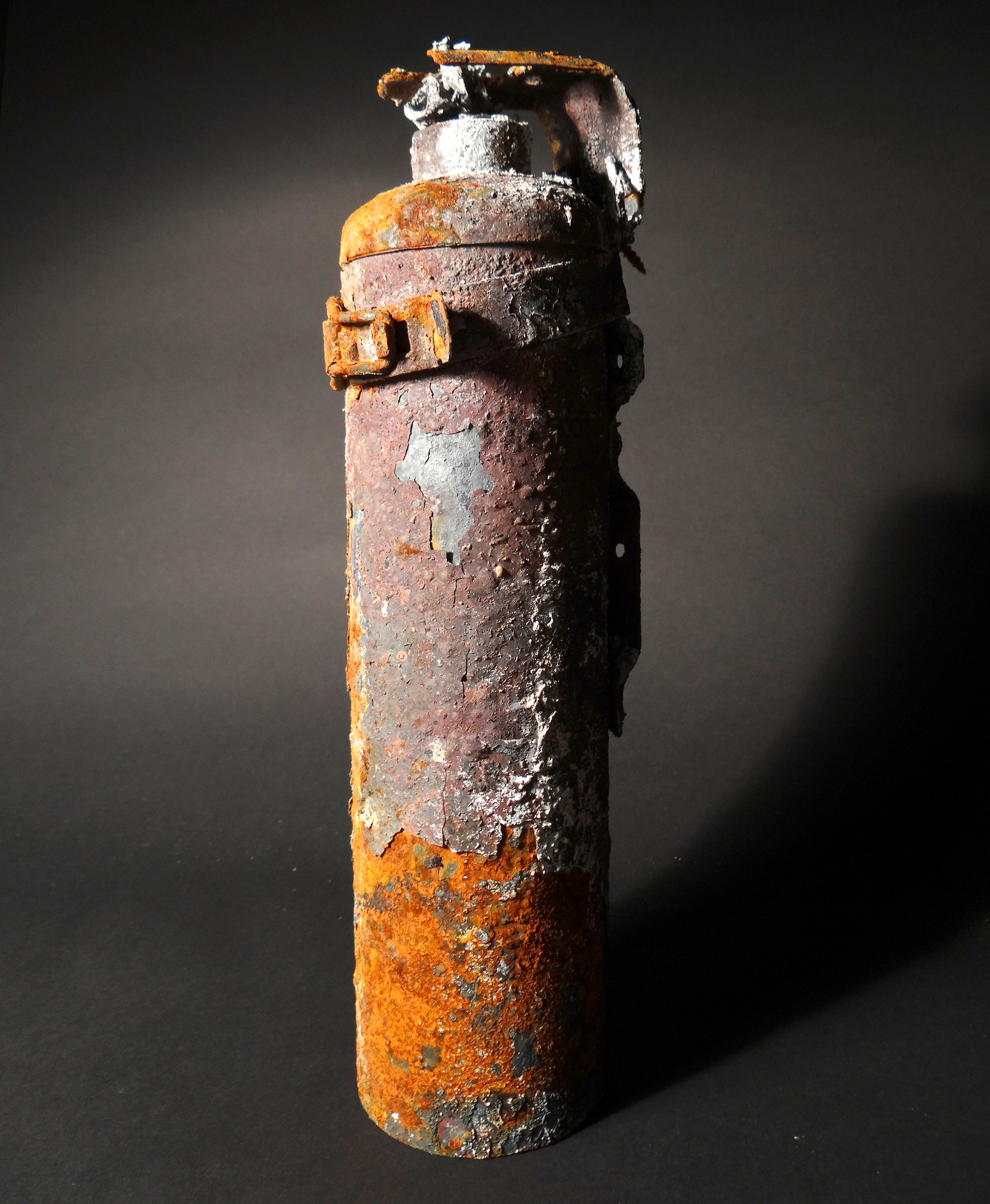 Fire Extinguisher The embodiment of irony: impotence in the face of Mother Nature. Courtesy of Stephanie Taylor. 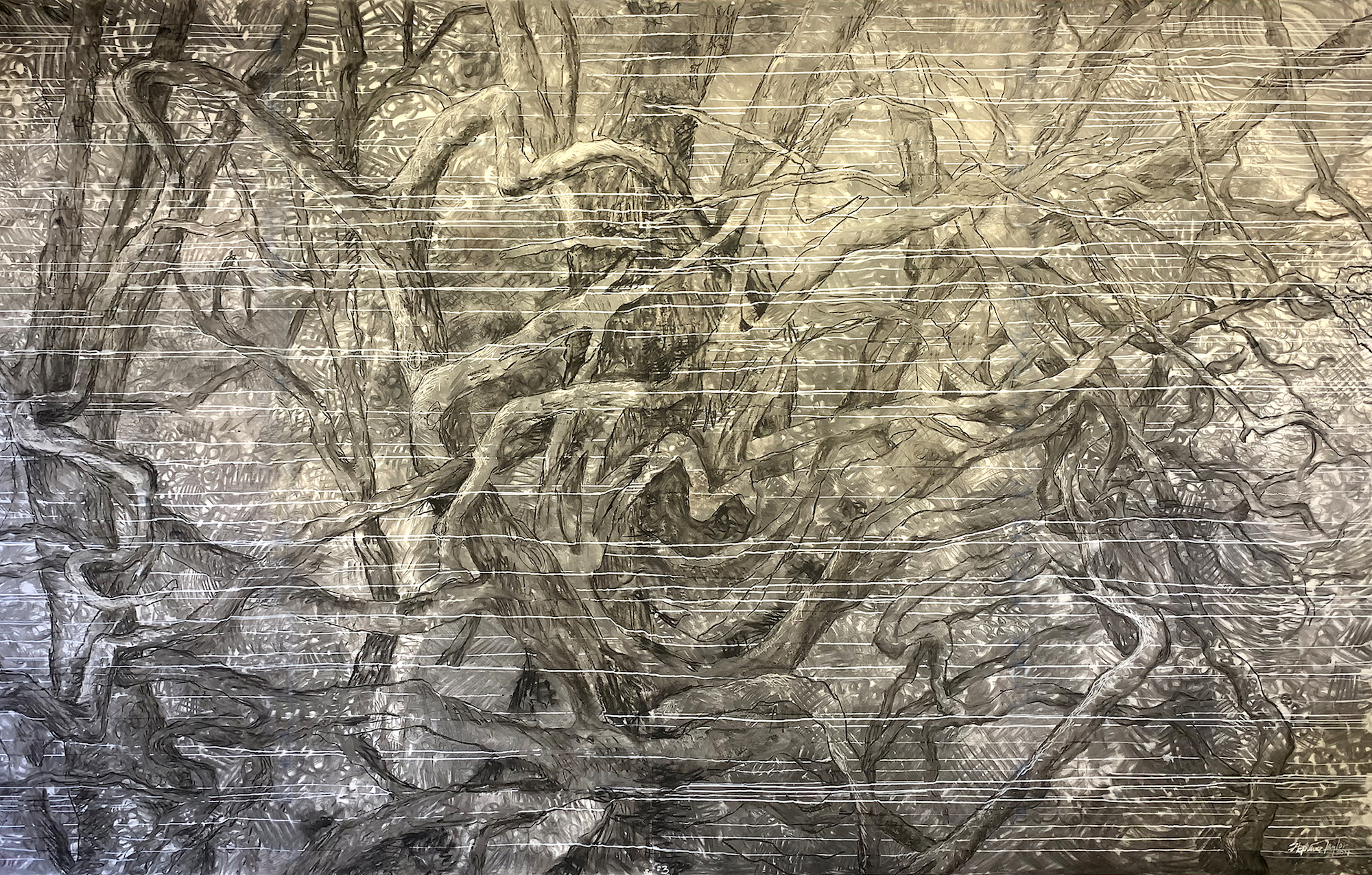 Wildfire Wind, charcoal and paint on vellum, 7’ x 12’. Taylor collected blackened lumber from failed walls and rubbed chunks across the vellum until nothing remained. Courtesy of Stephanie Taylor. 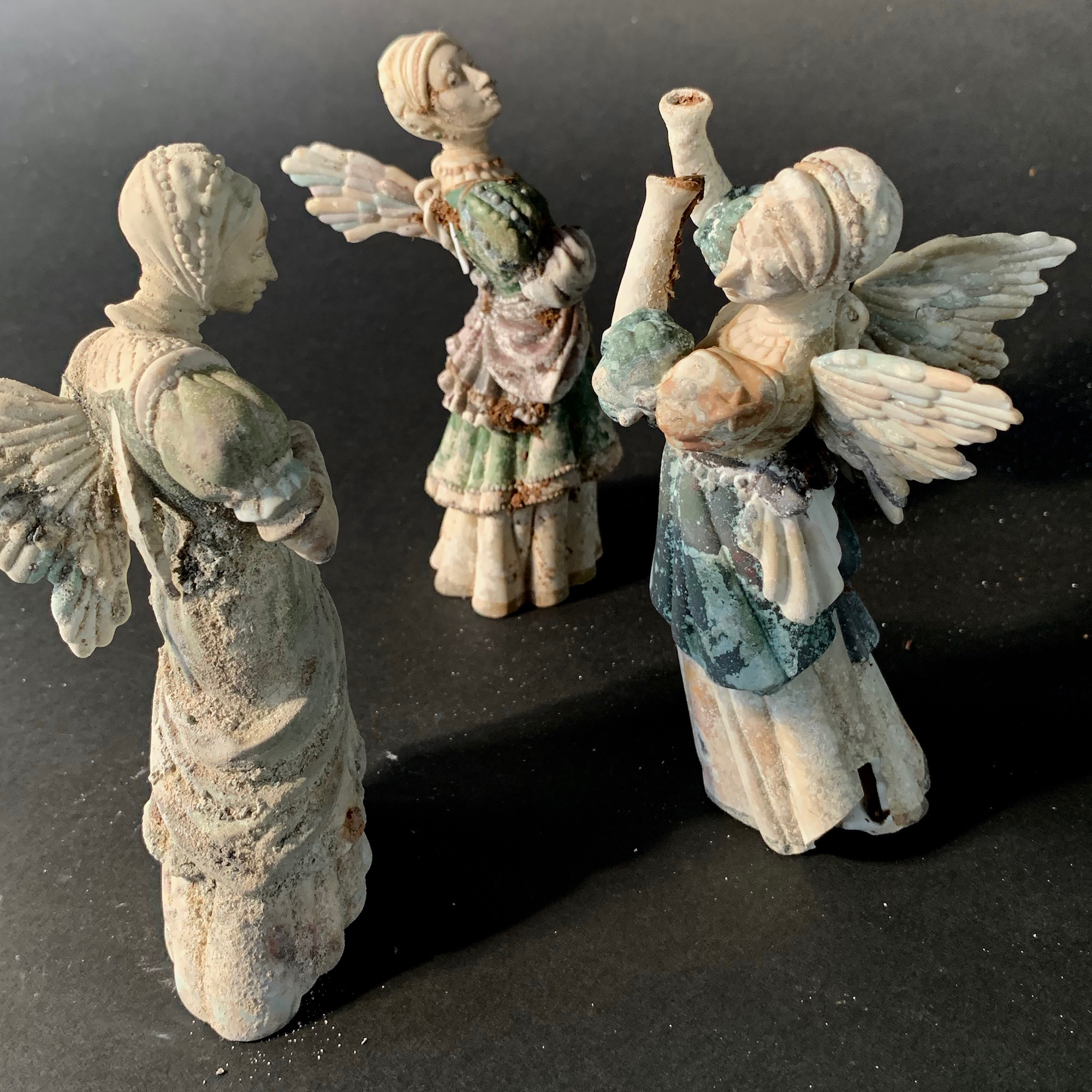 On November 8, 2018, endless images streamed from the Camp Fire in my hometown of Paradise, California. A single day generated thousands of pictures that filled the world with a new vision of calamity. One-sentence captions ran under photos of engulfed schools, destroyed businesses, and miles of scorched cars scattered across ruined roadways—waiting their turns to never get out.

This is how grief reads. Tightly packed, difficult descriptions giving way to emptiness.

The first image of Paradise that I saw that morning was a photo that was posted on a website. Taken from a rooftop in the next town down the hill, the vector of smoke spread from one edge of the image to the other. I knew at that moment—one image, no caption—that the town would disappear that day.

Tense moments and texts followed, my parents escaping their home of 55 years. They left behind my grandparents’ house next door; we had held onto it after they’d passed away years before. Both houses were filled with five generations of mementos. It was our Paradise.

The images from the Camp Fire stay with me, scrolling like newsreels in my head. Pictorials of a town’s downed houses. Still lifes of altered treasures excavated from the heap. Some days there are words to go with them. Other days I retreat to blank pages.

My parents looked back one last time the day of the fire, trees flaring like torches at the end of our lane.

In the days that followed, we huddled near computer screens watching raw video shot by firefighters and rescue workers while driving through town. We searched for both homes onscreen. Two moving images captured the corner of our property at the intersection of what was once a busy street. We spent hours studying, enhancing, and enlarging flickering footage, orienting and reorienting ourselves around the only marker we recognized: a row of trees now singed that ran along the edge of our property.

When we enlarged the images too much, it became impossible to discern any detail at all. A call from a firefighter friend four days after confirmed that both houses were a total loss. Everything was gone. He sent pictures. I have not viewed them since.

The images from the Camp Fire stay with me, scrolling like newsreels in my head. Pictorials of a town’s downed houses. Still lifes of altered treasures excavated from the heap. Some days there are words to go with them. Other days I retreat to blank pages.

It has been a year since the fire swept through Paradise. Every single day I wish for these images to not belong to my family, my friends, my hometown.

These images, selected from Simple Objects: An Excavation, archive the fire-altered contents of Christy Heron-Clark’s two family homes in Paradise, after the Camp Fire on November 8, 2018. Following an exhibition at Archival Gallery in Sacramento, Simple Objects: An Excavation traveled to the Sutter County Museum in Yuba City, where it will remain on view until December 1.