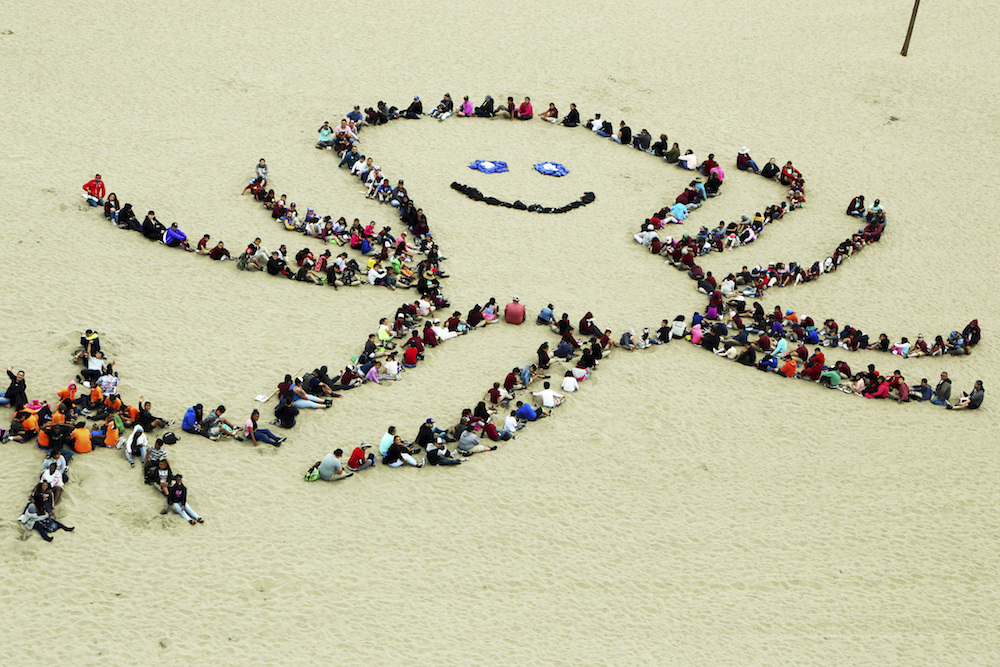 Yes, sea levels are rising. Yes, California’s coastline is eroding and changing. And yes, even with Californians taking action against climate change, we are going to lose beloved beaches, bluffs, and homes.

But we must not let our relationship with the coast become dominated by fear, division, and local politics. Approaching sea-level rise as another legal-political fight encourages the kinds of climate response—drastic, panicked, and litigation-driven—that our descendants will rue.

Instead, we should embrace the coast’s constantly shifting nature, cling to its mysteries, and celebrate its evolution as a way to encourage our own.

How? In the spirit of California, I want us all to party on the beach. All day and all night. The state known for social innovations such as Beach Blanket Bingo should apply the full force of its fun-making genius to organizing free, public events that draw Californians to the coast.

These events would combine the spirit of an Irish wake, a beach barbecue and an urban planning meeting. There would be good food, abundant drink, and grand visions to help us mourn the coast we’re losing so that we might imagine a better future for our coastal communities, and ourselves.

In saying this, I don’t mean to minimize the seriousness of climate change or sea-level rise. West Coast waters are now rising as fast as any on earth. Under worst-case scenarios, nearly 1 million Californians could be displaced, nearly 400,000 homes could be lost, and property damage could approach $200 billion. Our coastal species face extinction, our biggest industries could suffer crushing blows, and transportation infrastructure from the airports to the Amtrak rail line to San Diego are at risk.

In this context, my plan for beach parties addresses a serious flaw in our climate change planning process—that we’re fighting too much over what we do, and not thinking enough about how we do it.

Let’s move the conversation out of the courts and city council chambers—and onto the coast itself. Bring on the beach parties, and the potlucks. Let’s have open houses at homes and fire stations that sit atop doomed bluffs. Every coastal community should have a grand coastal fair. And given how fossil fuels contribute to climate change, the state could justifiably use a small piece of its oil revenues to help pay for all this fun.

Already the state is mired in bitter struggles over rising sea-levels in our coastal communities—between those who want to defend themselves from the ocean with sea walls and those who prefer “managed retreat” from the coast—that threaten to harden into divisive, decades-long legal and political battles.

We’ll be better off if we face the rising seas with a welcoming attitude, as you would when an old friend—in this case, the ocean—moves back to town. Yes, our coast is changing, and so must we. We should seize on rising waters as an opportunity to appreciate a new coast. In the process, we might get to know the visible edge of our continent, and ourselves, even better.

After all, this is the California coast, one of the world’s greatest treasures, and, according to the state constitution, it belongs to all of us. It has come to define the California ideals of beauty, play, refuge, and environmentalism; images of the coast have inspired millions of people to visit California, and even settle here.

So let’s not build a wall. Let’s not retreat. Let’s put on our wet suits and wade in. Let’s embrace the flood.

And let’s move the conversation out of the courts and city council chambers—and onto the coast itself. Bring on the beach parties, and the potlucks. Let’s have open houses at homes and fire stations that sit atop doomed bluffs. Every coastal community should have a grand coastal fair. And given how fossil fuels contribute to climate change, the state could justifiably use a small piece of its oil revenues to help pay for all this fun.

Coastal fairs would combine food, fun and games—surfing, volleyball, even sandbag-filling contests, and plenty of cold beer and ice cream—but they’d also create opportunities to share information. Agencies and experts could be on hand to answer questions, and lay out markers to show where the coastline might move, and what might be lost, under different sea-level projections. Artists could drop by to create visions of the future coast.

The goal of such gatherings would be to expand local knowledge, and to introduce new realities to the inland Californians who don’t get to the coast much. At coastal fairs, they’ll quickly understand that sea-level rise is already quite visible—and not only in places like Pacifica or Del Mar, which have made the news for losing property. In Malibu recently, I was shocked to discover that my favorite beach is now completely gone at high tide.

Bringing more people to the coast could help build consensus about the challenges we face, and inspire new ideas. Given the long-term nature of the problem, kids should get involved in this new thinking, too. Why not have California schools ditch the outdated mission reports and have their students report on particular stretches of coast instead?

Responding to sea-level rise with beach parties also could stoke local democracy. Communities have been slow to create the inventories of vulnerable properties that they need to plan for sea-level rise. Coastal fairs could speed up the process. If local communities don’t get their act together with smart, unifying plans for their coasts, the state government in Sacramento is likely to fill the void, imposing one-size-fits-all policies that only cause more conflict—like the never-ending water wars that plague California’s inland regions.

Sea-level rise also offers a huge opportunity to reclaim access to the coast, which is too often controlled by rich homeowners and other wealthy interests. With the coastal properties of the rich now at risk, there’s a real opening for Californians to take the coast back—but only if we pull together.

The idea of partying around sea-level is as old as the Book of Genesis, when Noah celebrated surviving apocalypse in his ark by getting drunk and taking off all his clothes. And in recent years, a few communities, from San Rafael to Santa Cruz, have hosted wonky events on sea-level rise.

“What’s the proper salutation between people as they pass each other in this flood?” asked the Canadian-turned-Californian singer-songwriter Leonard Cohen.

The best answer to that query is: something happy. California’s most powerful tools for responding to sea-level rise are our affection for the coast and our sunny optimism in the face of Armageddon.