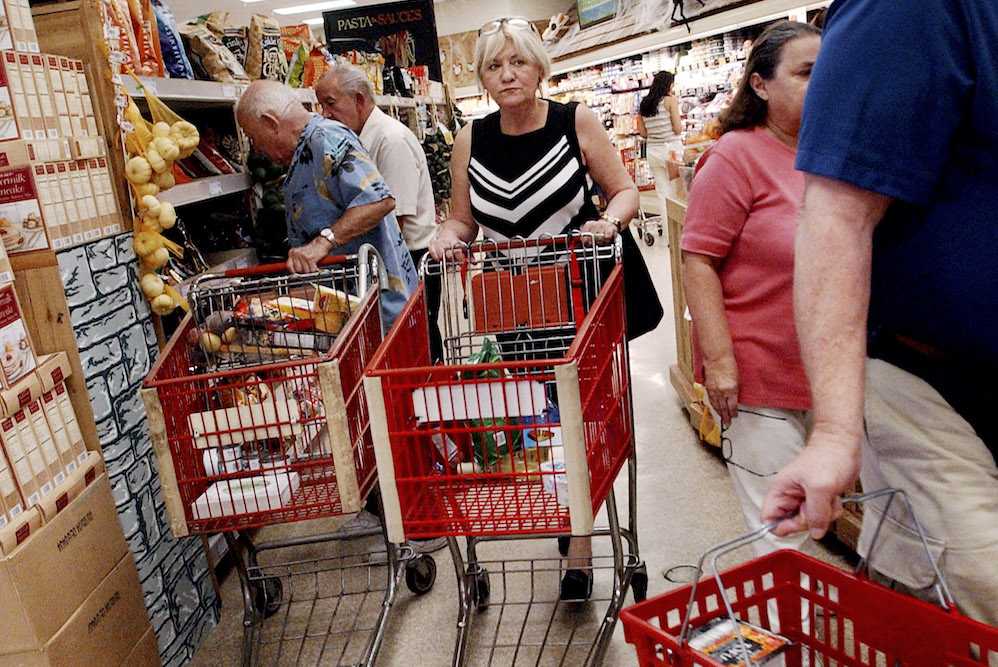 Jeanette Owen, center, and others browse the aisles of Trader Joe’s in Los Feliz, Los Angeles, on October 14, 2003. Courtesy of Ric Francis/Associated Press.

For years, I’ve told children, newspaper editors, and other credulous people that I’m the Joe of Trader Joe’s. That’s, of course, a lie. But it is true that the store and I grew up in the very same neighborhood.

As a child in Pasadena, I rode my bike the two short blocks from my house to the Trader Joe’s on Arroyo Parkway—the original store, first opened by Joe Coulombe, a San Diego native and Stanford alum, back in 1967. It was known for being a cramped and cluttered place, mostly good for sweet and salty snacks. So I’ve watched its growth—to 480-plus stores doing $13 billion in sales annually across 41 states—with the rapt wonder with which you might follow the transformation of the freckle-faced boy next door into a major movie star.

In the process, Trader Joe’s, as one of California’s most successful ideas, has offered an ongoing rebuttal to the conventional wisdom about our state.

California leaders and businesses often say our state is great because of its size, infinite diversity, groundbreaking technology, limitless choices, and relentless competition. But Trader Joe’s provides none of those things, and yet it’s great too. This raises the question: Do we really understand the true source of California’s greatness?

After all, Trader Joe’s California-inspired vision is determinedly narrow. It eschews technology (it doesn’t do online sales, or even have a loyalty program). And its core business strategy is to limit our choices.

Trader Joe’s has expertly exploited a fundamentally Californian fantasy: that we can be both cheapskates and snobs at the very same time. Californians are desperate to live—or at least appear to be living—better, more pleasurable lives than other Americans. But, given California’s economic realities, very few of us, even our most educated neighbors, can really afford to do that.

As other grocery stores become behemoths, offering 50,000 items drawn from a wide variety of companies and brands, the typical Trader Joe’s has fewer than 5,000 items, most under its very own brand. Supermarkets offer endless supplies of key items, but Trader Joe’s is proudly unreliable, often jettisoning my favorite offerings or shifting the items it sells with the seasons. Instead, it focuses on providing a small number of items at low prices—including beer and wine, frozen foods, vegetarian items, and, of course, those snacks.

“I think Trader Joe’s is the best example of how the world should be constructed,” Barry Schwartz, a prominent psychology professor at Swarthmore who has studied Trader Joe’s, once told an interviewer. “When you give people too many options, they get paralyzed instead of liberated.”

It also points to the power of education: Coulombe, Trader Joe’s founder, saw his store as serving America’s growing class of overeducated, well-traveled, and underpaid people; he has quipped that his ideal customer was “an unemployed PhD.”

In realizing that vision, Trader Joe’s has expertly exploited a fundamentally Californian fantasy: that we can be both cheapskates and snobs at the very same time. Californians are desperate to live—or at least appear to be living—better, more pleasurable lives than other Americans. But, given California’s economic realities, very few of us, even our most educated neighbors, can really afford to do that. Trader Joe’s is beloved because—with its chocolates, its cheeses, its wines, its holiday selection, its paisley-shaped, matcha-flavored mints—it allows us to keep up appearances at low prices. In this context, it’s fitting that the Napa Valley winery of the real Charles T. Shaw, of Two-Buck Chuck wine fame, went bankrupt. 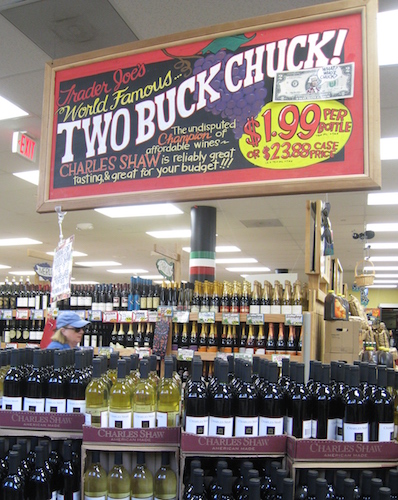 Trader Joe’s allows us to keep up appearances at low prices. Courtesy of Wikimedia Commons.

The cult-like attachment of Trader Joe’s fans is also grounded in how the stores let us have it both ways on healthy living. Everything from the novelty to the packaging to the newsletters at Trader Joe’s projects an image of health, even though not much of the “healthy food,” like the granola, is very good for you. In this, Trader Joe’s is a perfect reflection of a state more interested in appearing healthy than in actually being so.

At a local Rotary Club in the San Gabriel Valley, I once heard Coulombe explain his creation this way: having everything is nice, but it’s even nicer to make sure everything you’ve got is actually worth having. I have never heard a more perfect summing-up of California’s aspirational modern values.

Coulombe also said then that the real secret to Trader Joe’s is the employees. Workers at Trader Joe’s are friendly and knowledgeable because they stick around, and they stick around because of good benefits and pay. The stated goal of the company, which is relatively tight-lipped about itself, has been for full-time people to make at least the median income for a California family, which today is more than $60,000 a year.

The company, unlike a Silicon Valley startup, has grown slowly and carefully. It didn’t expand outside California until the 1990s, a quarter century after its Pasadena launch. Expansion has been made possible by international investment. The family behind Aldi, the German grocery chain, bought Trader Joe’s decades ago, but hasn’t changed its essence. And so, my favorite Trader Joe’s feature, the no-questions-asked return policy, remains very much in effect.

Of course, Trader Joe’s is far from perfect. It has encountered labor problems as it moved east. It has faced criticism about whether its packaging is environmentally friendly. It is infamous for its small parking lots—and all the traffic and backups they can create in nearby blocks.

But the biggest complaints about Trader Joe’s come from the places that don’t yet have it. People in Canada, Australia, and Europe have campaigned unsuccessfully for the company to open locations outside the United States. In recent years, a man in Vancouver even established a Pirate Joe’s store, with items he carried across the border from Washington state, before legal pressure from the real Trader Joe’s forced its closing.

But no place demonstrates the appeal of the Trader Joe’s idea more than Hawai‘i, albeit with a twist of unrequited love. Surveys suggest that Trader Joe’s is one of the favorite brands of Hawai‘i residents, who like to give the snacks as gifts. But there is no Trader Joe’s store anywhere on the islands, despite multiple recruitment campaigns by the state’s business and political heavyweights. The company reportedly hasn’t found a way to make its lower-cost, short-supply-chain model work for a place so far away from everything else.

Even without stores in Hawai‘i, Trader Joe’s food is ubiquitous there. Some Trader Joe’s stuff arrives via unauthorized online resales on eBay or Amazon. The rest is smuggled by residents who load up suitcases with items purchased near airports in L.A. or Las Vegas.

On a recent trip to Honolulu, it took me all of an hour to make contact with a local Trader Joe’s smuggling ring. I soon found myself walking through a convenience store and into a small storage space, which was full of Trader Joe’s branded butter, nuts, and other goodies. I bought a pack of Dark Chocolate Sunflower Seed Butter Cups, at a $1 mark-up.