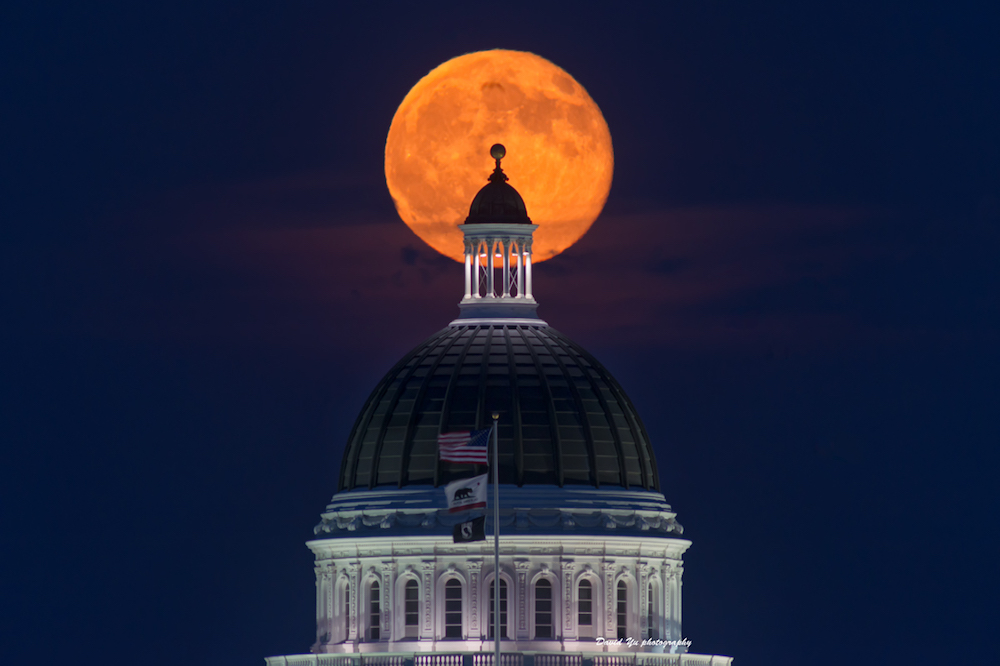 It’ll take more than a blue moon for California to find the potential within itself. Courtesy of David Yu/Flickr.

I’m so proud of all three of you. I especially appreciate that, now that you’re 21, 18, and 16 years old, you no longer fight with each other constantly like you did when you were little. You’re all doing well in school and in work, and you have bright futures ahead.

But I also want you to never forget how lucky you’ve been to come of age in California during this now-concluding decade, the Roaring 2020s. Our state is doing so well now that it’s hard to remember how fraught things seemed 10 years ago.

In those days, California failed to live up to its progressive ideals. Facing a dire housing shortage and a homelessness crisis, the state had one of the highest poverty rates in the nation. Digital technology was causing massive disruption. Mega-fires, sparked by bankrupt utilities and made more dangerous by climate change, were destroying homes and killing people. And the federal government was undermining our desperate efforts to reckon with all these problems.

“It’s the End of California As We Know It,” declared a column in the New York Times in the final weeks of 2019.

What was most dispiriting back then was that, while many Californians were working on our biggest challenges, we couldn’t seem to make much progress. Neither governments, nor businesses, nor civil society provided strong enough tools to deal with problems that seemed too big and overwhelming.

Amidst these feelings of hopelessness, we fell even deeper into a bad habit. We started declaring that we would solve certain problems, or make certain progress, by a set year—without having any real plans for how to do it. This year was 2030.

As a target date, 2030 came up again and again, particularly in efforts to fight climate change. Leaders in Sacramento talked constantly about the need to reduce emissions to 40 percent below 1990 levels by 2030. But those goals weren’t accompanied by realistic plans to achieve the requisite remissions reductions of nearly 5 percent annually—especially in the face of our outsized and increasing emissions from transportation and wildfires.

2030 fantasies went much further than climate, though. In 2018, the State Department of Education declared a goal under “Global California 2030” of making half of all K-12 students proficient in two or more languages. It was a wonderful idea, but it wasn’t serious. No one ever provided the funding for massive increases in immersion programs and foreign language teachers that would be necessary to make it happen.

In January 2021, thousands of homeless Californians, desperate for shelter and action, stormed the Capitol and kicked all the legislators, staffers and even the governor out of their offices. With public opinion on their side, they made the building their home for the next year.

In retrospect, too many of our 2030 goals were too small and underfunded—like the state’s plans to build up long-term care and other services for seniors when the population of people over 65 doubled between 2015 and 2030. Or the University of California’s underwhelming “UC 2030,” which outlined the modest goal of increasing graduation rates a few points. At the same time as the UC system talked about such improvements, it did shockingly little to make itself a leader in online education—which is what ultimately revolutionized the quality and accessibility of education for all Californians.

Since the three of you were so young at that time, you may not realize what finally shook California out of its stupor of ungrounded goals: two calamities that made the first couple of the years of the 2020s really challenging.

The first was that the housing crisis got dramatically worse after 2019. The state kept making new demands for housing, but local governments kept opposing new construction—making the housing shortage even more severe.

In January 2021, thousands of homeless Californians, desperate for shelter and action, stormed the Capitol and kicked all the legislators, staffers, and even the governor out of their offices. With public opinion on their side, they made the building their home for the next year.

At the same time, a nasty national recession hit, fueled by a loss in confidence after a federal debt default. In one early 2021 poll, half of all Californians feared they could become homeless in the next two years.

That drove the Golden State to take radical action.

During the Great Recession in 2008, California had considered replacing its old and overly complicated constitution, which made governing in crisis impossible, with a new system. But elites instead decided to make budget cuts and suffer through the pain of mass unemployment, rampant foreclosures, and a slow recovery. But by 2021, with housing needs dire and the economy in free fall, it was clear that the governing system needed to change to give people and leaders the agency to deal with our problems. Younger generations of Californians, a more diverse group than their parents, were adamant about starting anew—particularly once they came to understand that California’s existing constitution had been drafted in 1879 by an openly racist convention of white men.

Looking back, it’s clear that what really transformed California in the 2020s wasn’t any of the overly hyped technologies—from self-driving cars to cheaper space rockets—that drove conversations about the future in 2019. Instead, the biggest driver of change was California’s new constitution, drafted in early 2022 and approved by voters later that year. At just 10,000 words, it was only 1/20th the length of the old document, and it was hardly perfect. But crucially, this shorter constitution took powers away from state government, thus creating more freedom for regions and local communities to govern themselves.

The effect was startling, rapid, and deep. The state’s regions were able to accelerate housing, remake transportation systems, take back control of crucial utilities, and ramp up economic development—without the endless delays associated with state regulations. In one constitutional moment, so many pent-up ambitions were unleashed that the entire state seemed to roar with new innovation. It was so transformative that our old 2030 goals began to seem much too small.

In retrospect, we should have been able to see more of the potential within ourselves. Back in 2019, I traveled the state as a columnist and often marveled that, for all the state’s structural problems, our local communities were still finding ways to make progress. Some places, like the city of West Sacramento, were so small that they didn’t have to follow all the usual rules, and could produce the innovative housing and economic development they needed. Others, like Glendale, cleverly devised ways to set themselves on a firmer financial footing. Indeed, even in the despair of early 2020, Fresno was remaking itself into our next great city, and sprawling Los Angeles was so bold in rebuilding its transit system that city governments in Boston and New York took notice.

Now, if I had written a letter like this to you in January 2020, it would have been dismissed as a fairy tale. People’s moods were just too dark and reflexively pessimistic back then.

But, looking back now on the 2020s, the biggest lesson is clear: that deep within our hearts and communities, Californians carry possibilities so grand that the future may happily surprise us.