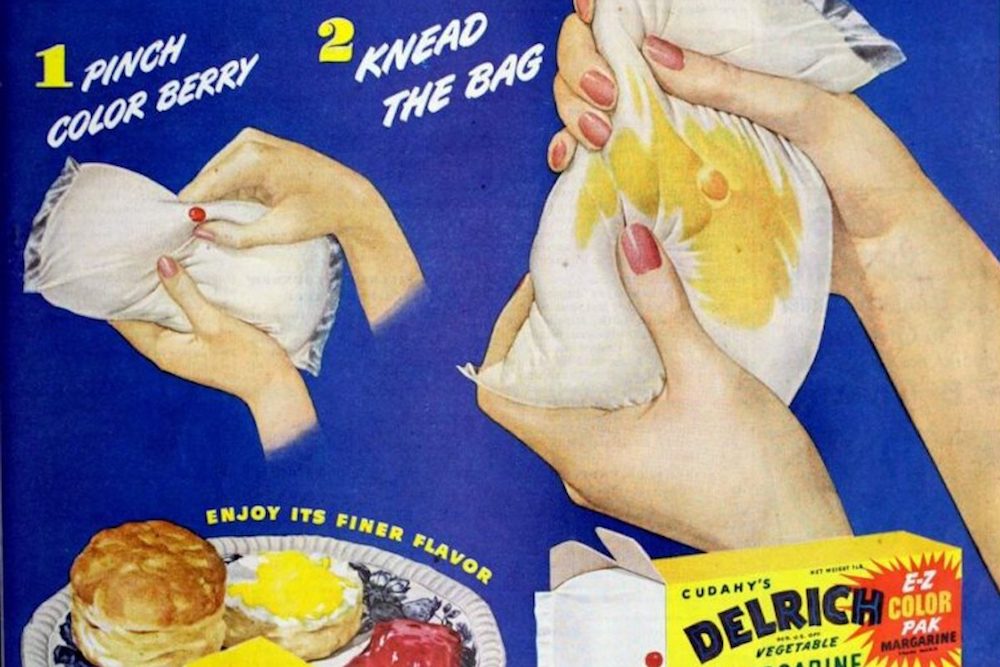 This 1948 ad for Cudahy's Delrich brand of margarine uses a "color berry" to color its margarine yellow. Courtesy of the Ladies’ Home Journal.

Tomatoes are red, margarine is yellow, and oranges, are, well, orange. We expect certain foods to be certain colors. What we don’t realize is that these colors are not necessarily a product of nature but rather of historical controversies and deliberate decisions by various actors—including the government.

The story of how America’s federal government helped select specific colors for certain foods dates to late 19th century, when new processed foods were introduced. The color of margarine is a particularly powerful example of how the intersection of political power, industry competition, and regulation determined the look of what people ate.

When margarine was first introduced to the U.S. market in 1873 as a cheaper substitute for butter, dairy producers, fearful of intense competition and a price decline for butter, lobbied against the manufacturing and marketing of margarine. One favored way of limiting margarine was to restrict the color of margarine, so it would not look like butter.

By 1898, 26 states had regulated margarine under so-called “anti-color” laws, which prohibited the manufacture and sale of yellow-colored margarine (uncolored products were allowed). Other states went further: Vermont (1884), New Hampshire (1891), and South Dakota (1891) passed laws that required margarine to be colored pink.

Margarine color wasn’t just a matter for the states to decide. The federal government enacted the first national margarine legislation in 1886. The Oleomargarine Act permitted the addition of color to margarine but restricted margarine production and sale by levying a tax of two cents per pound on margarine whether it was colored or uncolored. The act proved ineffective, however, because inspection took time and money. And that was more than state inspectors could manage, according to the Sixteenth Annual Report of the Michigan Dairymen’s Association, published in 1900.

So, to make margarine restriction more stringent and effective, in 1902 Congress passed an amendment to the 1886 act, levying a higher tax on colored margarine. It enforced a 10-cent tax on “artificially colored” margarine while reducing the tax on uncolored products from two cents to one-fourth of a cent.

Margarine production decreased immediately, and significantly, afterward. Consumers wanted their margarine in yellow, particularly when serving it as a spread. After all, margarine was a substitute for butter, which many consumers expected to be the same yellow color all year round, even though the color of butter, in fact, was fluctuating seasonally (butter actually assumes a rich yellow color in early and mid-summer and pale yellow in autumn and winter due partly to cow’s feed).

Nevertheless, by 1910, margarine production had managed to rise to more than 140 million pounds annually—that’s 25 million pounds more than the amount produced in 1902. Margarine manufacturers managed this feat in part by an innovative workaround. They sold uncolored margarine with a capsule filled with yellow color solution so that consumers could just mix the dye with margarine at home themselves.

Soon, coloring margarine became a household chore and a regular part of American life. But the increasing consumption of margarine during and after World War II shifted the political climate over the bread spread, leading to the relaxation of the laws around coloring. Finally, in 1950, Congress repealed the 1902 margarine act. It took even longer still for Wisconsin—one of the strongest dairy states—to repeal its anti-margarine regulation in 1967.

Margarine manufacturers managed this feat in part by an innovative workaround. They sold uncolored margarine with a capsule filled with yellow color solution so that consumers could just mix the dye with margarine at home themselves.

The margarine wars, of course, were only one part of a larger story of the government’s struggle to regulate food. The government’s most important tool in this fight was the so-called “grade standards,” for monitoring the color of food, as well as other grading criteria such as shape and size. Over the course of the 20th century, grade standards were legalized, with apple-producing Maine leading fruit-producing states to enact standard laws that specified the colors, sizes, and shapes of foods.

The U.S. Department of Agriculture (USDA) had established the first federal grade standard in 1917 for potatoes, and then followed those up with standards for other fruits and vegetables. These were soon followed by new standards to govern canned foods, which were seen as a way to fight the adulteration and misbranding of canned products. These efforts were slow; the first canned foods standards, passed by Congress in 1930, were limited first to canned peas, tomatoes, and peaches—the government lacked financial resources for inspecting a wider variety of products. For the color of canned peas, not more than 4 percent of the peas in a can could be spotted or discolored.

By the 1970s, efforts by the government to regulate food color were less about inconsistent peas and more about increasing concerns over chemical additives, including food colorings. The federal government began to look at food color again, this time with an emphasis on safety regulation. Among many food additives, Red Dye No. 2, which many government officials and scientists had long believed to be among the safest, became one of the most controversial due to its potential toxicity. After more than two decades of debate, the federal government banned it in 1976.

That ban altered the food industry scene. Some food processors stopped making products in red entirely. General Foods, which had used Red Dye No. 2 in some flavors of Jell-O, Kool-Aid, and pet foods, switched to other red dyes. Other food companies, including Armour, General Mills, and Nabisco, followed suit.

Even M&M candies were impacted. Mars, Inc. eliminated red M&M’s entirely in 1976. According to the company, although it had not used Red Dye No. 2, the firm abandoned the red food coloring due to consumers’ “confusion and concern” over the dye, which the company worried could give consumers a negative impression of the red color in general. The company introduced orange M&M’s instead, along with green, yellow, light brown, and dark brown. Red M&M’s disappeared from the market for nearly a decade until the company reintroduced red candies in 1985.

Today, the USDA still categorizes fruits and vegetables into grades, such as “U.S. Extra Fancy,” “U.S. Fancy,” and “U.S. No. 1.” Among determining factors for each grade, color is one of the important criteria specified by the USDA.

How red is red enough? The answer varies. But for apples of red varieties, 50 to 60 percent of the surface needs to be covered with a “good shade of solid red” in order to be categorized as “U.S. Extra Fancy” (the exact percentage depends on the variety). The colors presented to consumers’ eyes are no longer the full spectrum that nature would offer, but rather the narrower range specified by government standards.