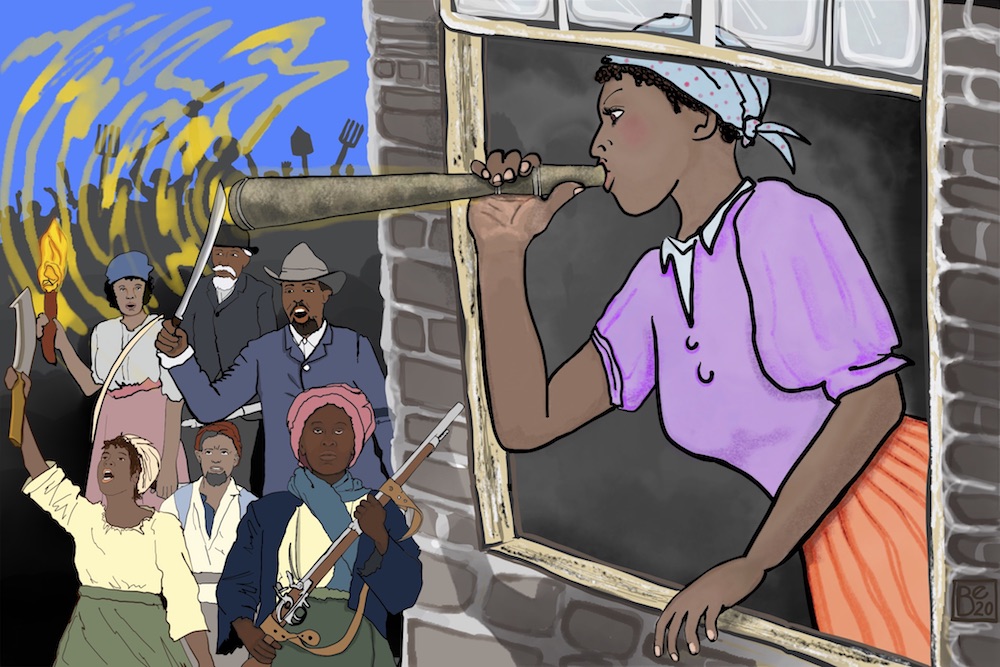 The muse for this story is a humble piece of stone, no more than an inch square. Sometime in the mid-19th century, it had been fashioned into a gunflint—an object that, when triggered to strike a piece of steel, could spark a small explosion of black powder and propel a lead ball from the muzzle of a gun with mortal velocity.

Archaeologists often come across gunflints. That’s because during the 19th century firearms were considered mundane items, owned by rich and poor alike. Gunflints, like shell casings now, were their disposable remnants.

But this gunflint is special.

Although I am now the Dean of Graduate Studies at a small state university in Pennsylvania, by training and profession I am an archaeologist. In 2008, my students and I, working with nearby residents, unearthed this unassuming little artifact during an archaeological dig in a little Pennsylvania village known as Christiana. We found it located in what today is a nondescript cornfield, where a small stone house once stood.

For a few hours in 1851, that modest residence served as a flashpoint in America’s struggle over slavery. There, an African American tenant farmer named William Parker led a skirmish that became a crucial flareup in the nation’s long-smoldering conflict over slavery.

It’s been 160 years since the uprising, which for most of its history was known as the Christiana Riot, but is now more often referred to as the Christiana Resistance, Christiana Tragedy, or Christiana Incident. In taking up arms, Parker and the small band of men and women he led proved that African Americans were willing to fight for their liberation and challenge the federal government’s position on slavery. Finding a broken and discarded flint offers a tangible piece of evidence of their struggle, evoking memories of a time when the end of slavery was still but a hope, and the guarantee of individual liberty for all people merely a dream.

The events at Christiana were a consequence of the Fugitive Slave Act of 1850, federal legislation passed in the wake of the Mexican American War of 1846-1848. California, a key part of territory seized by the U.S. following that conflict, had rejected slavery in its constitutional convention in 1849 and sought entry to the Union as a free state. To placate white Southerners who wanted to establish a slave state in Southern California, Congress forged the Compromise of 1850. The Fugitive Slave Act, its cornerstone legislation, forced all citizens to assist in the capture of anyone accused of being a fugitive in any state or territory. A person could be arrested merely on the strength of a signed affidavit and could not even testify in their own defense. Any person found guilty of harboring or supporting an accused fugitive could be imprisoned for up to six months and fined $1,000, nearly 100 times the average monthly wage of a Pennsylvania farmhand in 1850.

In some places, alarmed citizens began pushing back against what they perceived to be an overreach of federal power. In Lancaster County, Pennsylvania, however, the new law began fanning racial tension. Many whites in the area resented the movement of formerly enslaved people across the southern border, perceiving it as an invasion of destitute illegals that would depress wages in factory and field. Others were simply “negro haters,” as William Parker himself put it, all too happy to assist federal agents in sending African Americans back across the border. Some unscrupulous Pennsylvanians profited from illegally trafficking free African American men, women, and children south into slavery.

A new and insidious slave trade blossomed in the border states. The price of an enslaved person in nearby Maryland, for instance, jumped an estimated 35 percent following the passage of the law, which made kidnapping free people increasingly profitable and common. One Philadelphia kidnapper named George Alberti was indicted twice for selling free people into slavery and eventually admitted to kidnapping some 100 people over the course of his infamous career. The governor of Pennsylvania would pardon Alberti after he served less than a year of a 10-year sentence for kidnapping an infant.

With white Pennsylvania ambivalent at best about the fate of African Americans, it wasn’t shocking that someone decided to tell Maryland farmer Edward Gorsuch that two men who had escaped from his land two years before, Samuel Thompson and Joshua Kite, were hiding in William Parker’s rented house near Christiana.

In taking up arms, Parker and the small band of men and women he led proved that African Americans were willing to fight for their liberation and challenge the federal government’s position on slavery. Finding a broken and discarded flint offers a tangible piece of evidence of their struggle.

William Parker, a 30-year-old tenant farmer born in Maryland, had escaped slavery just a few years prior and had found refuge, if not full acceptance, in this quiet corner of Pennsylvania. Despite encountering sympathy from the Quaker community, Parker still feared for his safety. He joined other African Americans in the area to form mutual aid societies to defend against kidnapping, and established networks of lookouts to keep track of the movements of known kidnappers and their allies. One such network tipped off Parker that Gorsuch and a small band of relatives and supporters, accompanied by a notorious Philadelphia constable named Henry Kline who had been deputized as a U.S. marshal for the occasion, were hunting for Thompson and Kite. The black community of Christiana was on high alert.

Gorsuch’s armed posse crept through the rising mist at dawn on the morning of September 11, 1851, as Parker and his men waited at the house. Informed that kidnappers were about, but not knowing where they would strike, black neighbors for several miles around nervously waited for a distress signal calling out for help against the intruders.

Not knowing they had lost the element of surprise, Gorsuch and Kline attempted to storm the Parkers’ small stone house, only to be driven back down a narrow, winding stairway by armed defenders. Next, they tried to reason with Parker, who, barricaded in on the second floor, spoke for the group. Parker refused to acknowledge Kline’s right to apprehend the men, dismissing his federal warrant as a meaningless piece of paper. As tensions mounted, Eliza Parker, William’s wife, took up a trumpet-like horn, and blasted a note out of an upstairs window. Startled by the piercing sound, the Gorsuch party opened fire at the window, hoping either to incapacitate Eliza with a bullet wound or frighten her into silence. Despite the danger, she continued sounding the alarm, which reportedly could be heard for several miles around.

Within half an hour, at least two dozen African American men and women, armed with pistols, shotguns, corn cutters and scythes, arrived to assist the Parkers. Several white Quaker neighbors also appeared at the scene, hoping to prevent a violent confrontation. Favored now by the strength of numbers, Parker, Kite, and Thompson emerged from the house to convince Gorsuch and Kline to withdraw. Kline, recognizing the futility of the situation, quickly abandoned his comrades and retreated. But an enraged Gorsuch confronted Thompson—who struck Gorsuch over the head with the butt of his gun. Shots rang out. Within minutes, Gorsuch lay dead on the ground, his body riddled with bullets and lacerated by corn knives. His posse did their best to flee. Gorsuch’s son Dickinson had taken a shotgun blast to the chest at close range, barely had the strength to crawl from the scene, and was coughing up blood. Thomas Pearce, a nephew, was shot at least five times. Joshua Gorsuch, an aging cousin, had been beaten on the head, and stumbled away, dazed. Gorsuch’s body was carried to a local tavern, where it became the object of a coroner’s inquest. Despite their serious wounds, the rest of his party survived.

Retribution was swift. In the days that followed, every black man in the environs of Christiana was arrested on treason charges, as were the three white bystanders who had tried to convince Gorsuch to withdraw. The subsequent treason trial of Castner Hanway, one of the white bystanders, resulted in an acquittal. Despite the fury of both pro-slavery and compromise-favoring politicians, the prosecution, led by U.S. Attorney John Ashmead, moved to dismiss all charges against the other defendants, who were soon released. No one was ever arrested or tried on murder charges for the death of Edward Gorsuch, including the known principles at the Parker House—Kite, Thompson, Parker, Eliza, and their family—who fled north to Canada and remained free men.

Over time, the black community of Lancaster County grew to remember the Christiana Riot as a tragic victory. The event’s significance was more complicated for the white community. In the short term, many Lancastrians followed the pro-slavery lead of James Buchanan, who lived in the community and was elected U.S. president in 1856. Thaddeus Stevens, an abolitionist politician who represented Lancaster in the U.S. House of Representatives and had assisted in the defense of the accused, lost his seat to a member of his own Whig party in 1852, spurned by constituents who could not tolerate his liberal views on racial justice. But after Buchanan’s election, Stevens was soon buoyed by growing anti-slavery sentiment and returned to Congress, and with the outbreak of the Civil War, Lancastrians both black and white rallied fully to the Union cause.

The Parker House, abandoned after the family fled for Canada, became a place of pilgrimage after the Union victory. Curious visitors from around the region sought out the abandoned “Riot House” and took pieces of it away with them as souvenirs. By the late 1890s, the farmer who owned the land perceived the Parker House as a dangerous nuisance and had it knocked down and plowed over. In the years to come, it became hidden in time, presenting as nothing more than a scatter of stone and debris in an otherwise unremarkable field.

That was how we found it when we visited the cornfield at the invitation of a group of community volunteers who were interested in rebuilding the house as a memorial to William Parker’s struggle. Black and white descendants of the participants in the uprising joined us at the excavation, spellbound when we uncovered the first fragment of foundation wall, a remnant of a place that resonated with the power of ancestors who had risked their lives to prevent neighbors from being kidnapped into slavery.

We can say with some confidence that the small, square piece of stone recovered during the excavation is an artifact of the famous conflict. The gunflint was discovered nestled into the cellar stairs, right below the window where Eliza Parker sounded her alarm. We know that Gorsuch’s men fired at her from virtually this same spot and that men in the house returned fire. By 1851, flintlocks were old-fashioned weapons, widely replaced by more modern and efficient firearms, but we know from records of the treason trial that the weapons William Parker and his associates wielded were “old muskets.” That suggests the flint we found may have fallen from one of their outdated guns.

The artifact gives us pause. The gunflint reminds us of the progress we have made in overcoming racial injustice in the United States, but also that the work to reconcile with the violent legacies of slavery is far from over. It reminds us that the cost of liberty is often steep and that the events that have secured that liberty are often quickly forgotten. American stories like this one lie everywhere around us. They wait, mute, to be reconsidered, pointing to the past, and prodding us to tackle what yet is left to do.