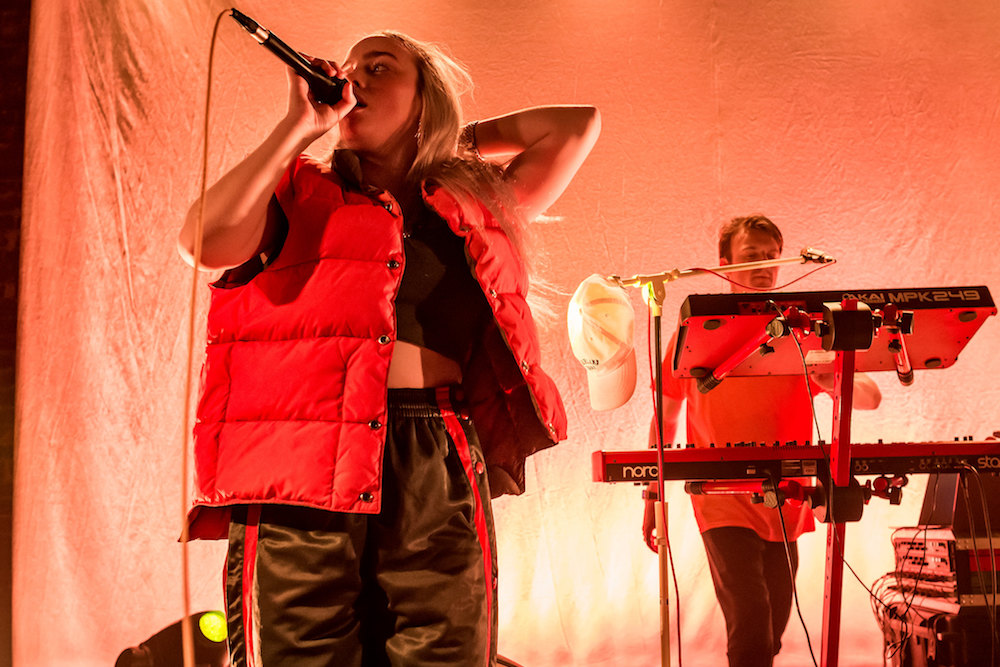 Billie Eilish and Finneas O’Connell perform at The Hi Hat in their hometown of Highland Park, Los Angeles, in August 2017. Courtesy of Justin Higuchi/flickr.

If Billie Eilish lives in the neighborhood, does that make her one of us?

If you follow the music charts, it might seem preposterous to think of Eilish as the California girl next door. After all, the 18-year-old is the first international pop star born in the 21st century, with the best-selling album of the past year, 50 million social media followers, and six nominations at this month’s Grammys, including nods for song, record, and album of the year. And her other-worldly voice, which can sound by turns angelic or menacing, is already among the most distinctive sounds in popular culture.

But, for all the exalted heights she’s reached, Eilish relentlessly portrays herself as a regular kid who is fundamentally grounded in her unglamorous neighborhood, Highland Park, in the northeast corner of the city of Los Angeles. In fashion magazines and TV appearances, Eilish is often photographed in and around the modest home—a 1,200-square foot, two-bedroom bungalow—where she still lives with her parents.

The house, in Eilish’s telling, is not just a symbol of her humility. It’s also the site of her creative inspiration. There, in one bedroom, Eilish and her older brother and collaborator, Finneas O’Connell, wrote, recorded and uploaded her first hit, “Ocean Eyes,” which got streamed more than 1 billion times. It’s also where they made Eilish’s 2019 album, When We All Fall Asleep, Where Do We Go?, which brought her as many Grammy nominations as Lil Nas X.

I must confess to feeling especially connected to this neighborly narrative, because I live along the same busy corridor as Eilish, five minutes away and just across the 110 Freeway. In this section of Southern California, you might expect to find teachers, young downtown professionals, or even a columnist who took on too big a mortgage. But this area is not a natural headquarters for global superstars, especially in an era when the most successful wall themselves off from the hoi polloi.

With her meteoric rise having turned her home into the newest local attraction, I drove over to check the place out. To my surprise, the house has the same simple design as my own humble abode—and is actually a little smaller.

While the star who says she is one of us is an old trope, there is something intriguingly irregular about Eilish’s regularity. And her choice of the mashed-up neighborhood of Highland Park to represent her reflects a shift in the center of California’s cultural gravity away from the suburbs.

It’s not hard to see how Highland Park influenced Eilish the artist. Her music, like her neighborhood, is a mash-up.

A half-century ago, another Southern California teenager with a magical voice erupted on the music scene. Karen Carpenter, like Eilish, collaborated with her big brother, and she too was portrayed as an average kid from a regular place—Downey, an L.A. suburb of the space age, with defense plants amidst middle-class houses and drive-in burger joints. In those days, Downey, like Carpenter’s music, represented a sunny California stability.

Eilish’s Highland Park, by contrast, is a messy mash-up of a neighborhood, far more urban than suburban. Its homes and apartment buildings, stuffed onto small lots, include every California architectural style. And its corridors feature an artsy-gritty mix of fancy coffee shops, downscale restaurants, and tattoo parlors, sometimes all on the same block.

Eilish—who favors baggy clothes, piercings, and a shock of neon-green hair—fits right in.

Highland Park, unlike Downey, is neither predictable nor stable. It has experienced considerable gentrification, and rising housing prices. (Eilish’s own home, purchased by her parents for $240,000 in 2001, is now worth more than $700,000, if you believe Zillow.) Highland Park is predominantly middle-income and Latino, with poorer people crammed into small rentals, and a significant homeless population wandering the streets.

Not long ago, Highland Park was the site of serious gang violence; homes and businesses still have bars over their windows. The closest restaurants to the now-famous Eilish home are a McDonald’s and a cheap taco place, and the closest row of businesses includes two auto body shops.

When I visited the neighborhood, trash had built up in alleys. A half-dozen homeless people had made a small encampment 300 yards from Eilish’s home; one of them kept dancing unsteadily out into traffic, as the others tried to talk him back.

In all of this, Highland Park encompasses the cross-pressures of a 21st-century California neighborhood. It’s a place of confounding change, as things seem to get better and worse at the same time.

It’s not hard to see how Highland Park influenced Eilish the artist. Her music, like her neighborhood, is a mash-up.

Each song on her album seems to nod to a different genre—rap, grunge, rock, emo. What her songs have in common is her magical voice—and a sensibility that mixes darkness and light.

In Eilish songs, the outside world is described like a horror film. She is wary of airplanes, fame, love (“Don’t you know I’m no good for you?” she sings in “When the Party’s Over”), beauty and emotion (“If teardrops could be bottled there’d be swimming pools filled by models.”) She is not vain; in her videos, her nose and eyes bleed, and she spits out her Invisalign.

When she writes of her home state, California is a place of fires and murders. She sings in one chorus:

In “Bad Guy,” which is up for song and record of the year, she sings, “I do what I want when I’m wanting to. My soul? So cynical.”

Her father told Rolling Stone that Eilish “has no tolerance for people she’s not interested in and doesn’t give a shit whether you like her or not.”

But most of Eilish’s songs are about her interior life—and her need to defend the emotions within in. On this subject, she is warm and confessional (about struggles with anxiety) in a way that draws you in. She can be harsh, but she doesn’t curse. If Karen Carpenter represented a California ethos of smooth and sun-splashed optimism (a façade that Carpenter tragically couldn’t maintain), Eilish stands for a warier California where you must fight to keep a home, and your soul.

The Eilish defense is built around attitude. She is unaffected by the swirl around her, or at least she tries to be. That’s the outlook you might cultivate if you live in a messy neighborhood where anything or anyone might come at you at any time.

Weird, after all, is our new normal.