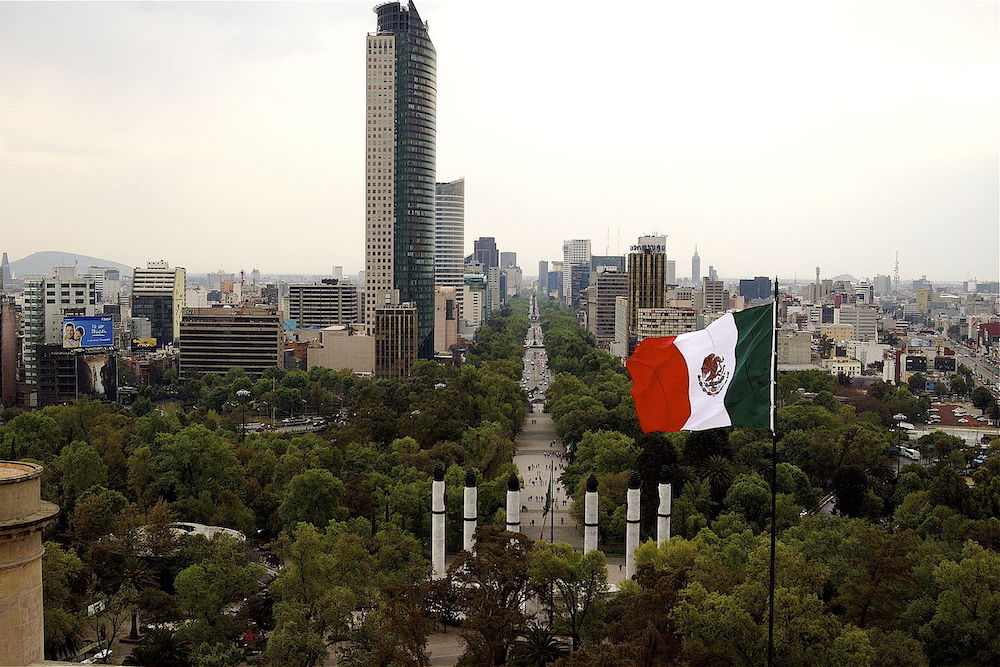 Mexico City would be a practical improvement as California’s national capital. Courtesy of Wikimedia Commons.

For more than two decades of the 19th century, Mexico City was California’s national capital.

I wish it could be again.

Over the past two years, I’ve visited Mexico City regularly while planning a global conference on direct democracy there for 2021. I’ve been struck by how well the Mexican capital’s sprawling greatness fits California. I also wonder if Mexico City’s recent advances in democratic sovereignty might serve as an inspiration to California, as we struggle to defend our own state democracy against the federal government in Washington, D.C.

Mexico City, with 9 million people living within the city proper and 21.3 million in the metro region, is a giant global capital, worthy of the giant global state of California. Set in a large elevated valley, it looks and feels far more Californian than that swamp alongside the Potomac ever could.

Mexico City is so much more than a government town. It’s North America’s greatest urban center, combining commerce and creativity with a breathtakingly fast multicultural pace, terrific food (you haven’t lived until you had a pambazo there), and unforgettable parties, even on formal occasions. There’s no comparison between, for example, the dynamic El Grito de Independencia events in Mexico City and Washington’s dull and predictable Fourth of Julys. California, which struggles to balance its rampant pursuit of economic success with its desire to enjoy life, would have another source of festive inspiration with Mexico City as our capital.

Mexico City would also be a practical improvement as California’s national capital. It’s hundreds of miles closer to California, and its major cities than D.C.; a flight from LAX to Benito Juárez International Airport is more than an hour shorter than a flight to Dulles. Mexico City has better weather than Washington—warmer in the winter, and cooler in the summer—which means Californians would not even need to change our clothes. And it offers enough smog to make an Angeleno feel at home.

But what really connects California to Mexico City is a shared interest in participatory democracy and local sovereignty. In these areas, a recent advance in Mexico City could be a catalyst for California improvement.

Until the 2010s, Mexico City and Washington were both federal districts—the “Distrito Federal” and the District of Columbia—with limited power over their own destinies. That’s still true in the District of Columbia, which doesn’t even have voting representation in Congress. But in the past few years, Mexico City has stood up for itself, abolished its federal district, and established itself as its own Mexican state. It has even adopted an innovative and democratic constitution that could be a model for the world.

It’s a wonderful story that Californians should know better, given our own challenges in defending our autonomy from the federal government.

Mexico City’s transformation began in 2013, when, as part of a bargain over reforms to Mexican energy, education and telecommunications policy, then-President Enrique Peña Nieto agreed to constitutional amendments that turned the city into its own state.

California schools could start by teaching more Mexican history and by replacing the traditional class trip to Washington with journeys to Mexico City. California universities with programs in D.C. might consider relocating scholars and students to the Mexican capital.

Using Change.org, a San Francisco-based website, Mexico City residents made their own suggestions for the constitution. Proposals that got 5,000 signatures were eligible for technical support from constitutional staff. Those that received 10,000 signatures of support earned their sponsors a meeting with the drafting committee. In the end, online proposals on parks, gay rights, and disabled rights were included in the constitution.

This “Carta Magna,” which took effect in 2018, also created openings for forms of participatory and direct democracy, like the ones we use in California. But the document went even further, giving far more representation and decision-making power to local communities.

Specifically, Mexico City was divided into 16 alcadías, or boroughs, each with their own city halls, mayors, and councils. Within those alcaldías, neighborhoods also have participatory bodies that allow residents to make decisions about how public resources are spent there. This structure is already producing more small public spaces, and greater attention to neighborhood concerns. It would be wonderful to see such a model in California, where local communities suffer under a governing system that centralizes power in Sacramento.

Mexico City’s constitution is innovative in other ways. One article establishes the “right to the city.” This guarantees citizens the “use and the full and equitable enjoyment of the city, founded on principles of social justice, democracy, participation, equality, sustainability, respect for cultural diversity, nature and the environment.” In short, the idea is that all the services and attractions that Mexico City offers should be available to everyone—and it puts cityhood at the center of the concept of democracy.

Another article of the constitution, entitled “Global City,” feels very Californian because it commits Mexico City to “peace, solidarity, hospital and asylum” and to participating in cooperative efforts with other cities and countries to improve policy around the world. Wouldn’t it be wonderful if California had a capital with that opening and welcoming policy, instead of suffering under a Washington committed to nativism and protectionism?

This Mexico City constitution has produced leadership of the sort that we would welcome in the Golden State. The new state of Mexico City’s elected head of government is Claudia Sheinbaum, a scientist who served on the Intergovernmental Panel on Climate Change and did her doctoral research at the Lawrence Berkeley National Laboratory.

Sheinbaum has visited California to urge closer ties. We should take her advice; Mexico is rising economically and educationally, and producing more of the engineers and skilled workers that California lacks. California’s stagnant university systems could also benefit from closer cooperation with Mexico, a youthful country which has more than doubled its number of universities in the past 20 years. We’d be wise to cooperate with Mexico in rebuilding infrastructure, with an eye toward promoting sustainability and boosting trade with our largest export market.

But closer ties can’t be all about economics. We should also shift our attention and cultural exchanges from D.C. to Mexico City. (Full disclosure: this column is produced by a Los Angeles-based media nonprofit, Zócalo Public Square, whose name is an homage to Mexico City’s greatest square.)

California schools could start by teaching more Mexican history and by replacing the traditional class trip to Washington with journeys to Mexico City. California universities with programs in D.C. might consider relocating scholars and students to the Mexican capital, which also happens to be North America’s greatest city.

Mexico City may be a capital out of California’s past. But it now feels like a capital of the future.