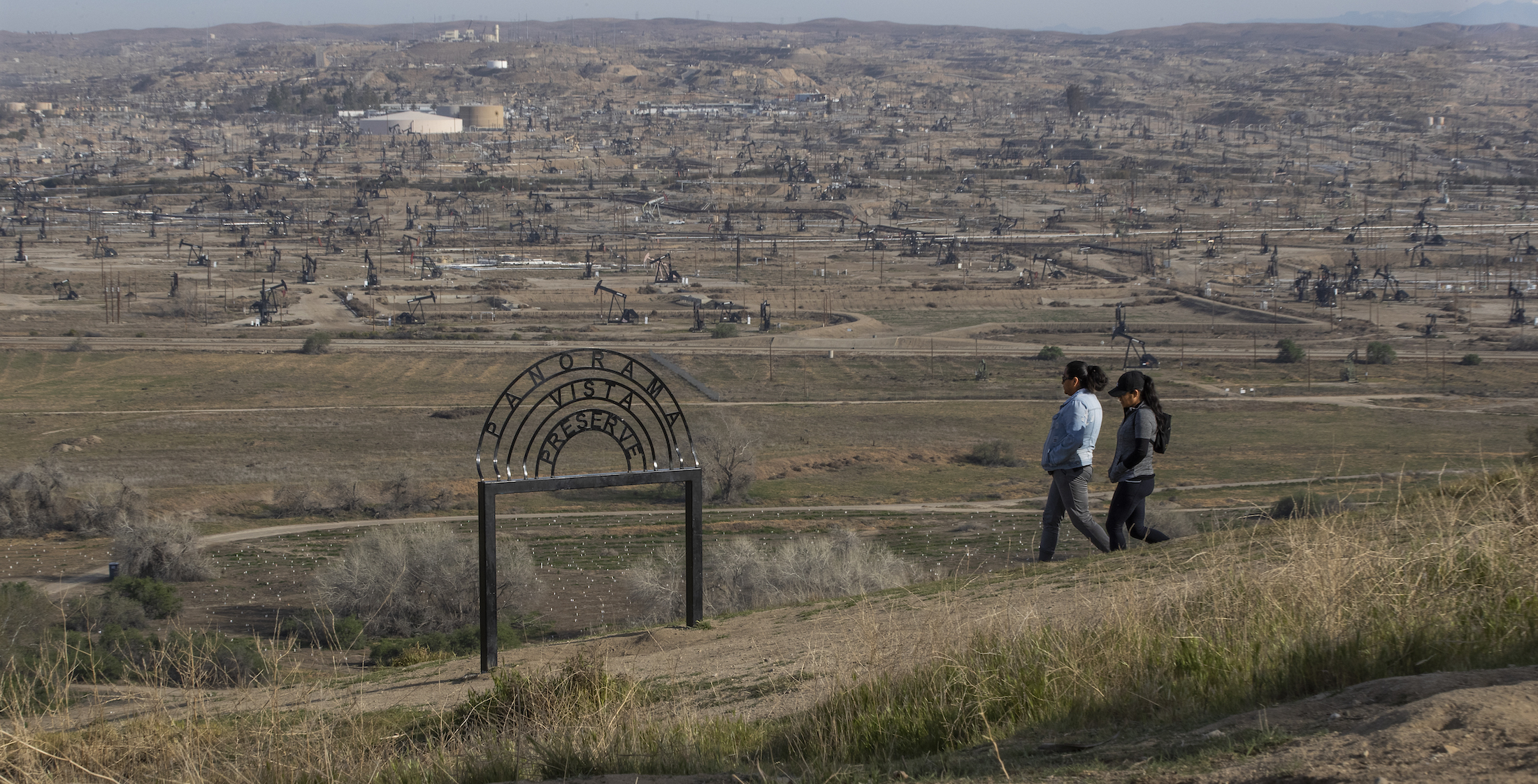 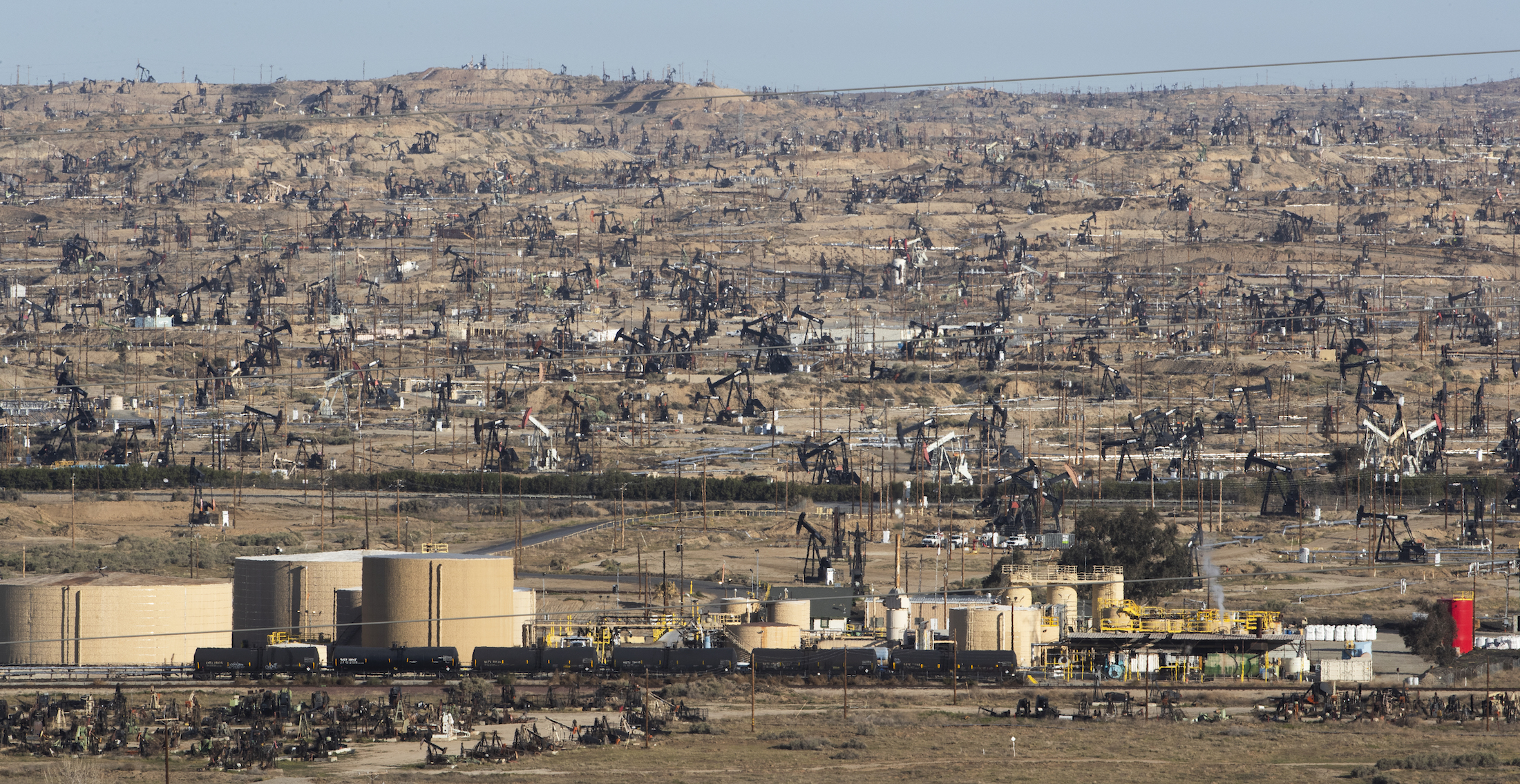 From the tunnel view of Yosemite Valley to just about any glimpse of the Golden Gate, California is famous for its extraordinary vistas. But if you’re looking for the state’s most thought-provoking view, skip the beaches and the mountains, and head instead for Bakersfield’s Panorama Park.

From this narrow neighborhood park atop the Panorama Bluffs on Bakersfield’s northern edge, you can’t actually see everything. It only seems like you can.

And when you take in this panoramic view of Kern County, you are not just looking out upon our nation’s greatest valley. You are witnessing how California’s past and present may be converging to create a very different future.

The view of oil fields and waterways isn’t exactly beautiful, but it is stunning—even overwhelming. And it provides undeniable evidence that in California, you really can defy the laws of chemistry: Here, oil and water really do mix, and all too well.

As you look out and down, the water appears first. The Kern River, fed from the slopes of Mt. Whitney, the state’s tallest peak, meanders below the park’s bluffs, winding through a small forest of willows, cottonwoods and sycamores. There are fish in the river, and birds flying above it.

This pastoral river can feel like an oasis amidst the larger, drier landscape. But it’s a time machine, a portal into the past—and perhaps into the future.

This land you see from Panorama Park used to be one of California’s wetter places. The river and other waterways often flooded, and the valley was a land of lakes. One of these was Tulare Lake, which could grow to as much as 60 miles long and 36 miles wide, making it the largest freshwater lake west of the Mississippi. In heavy rains or heavy snowmelt in the Sierras, the water systems of the Kern and San Joaquin Rivers and Tulare Lake would merge, turning the middle of California into an inland sea.

It provides undeniable evidence that in California, you really can defy the laws of chemistry: Here, oil and water really do mix, and all too well.

But in the 19th century, farmers began taming those volatile river and lake waters, eventually creating today’s drier landscape, with its tumbleweeds. Dams and canals went in. From Panorama Park, you can see two of the first: Beardsley Canal and Carrier Canal. Water that supplies the Carrier Canal also feeds the Kern Island Canal—Bakersfield once had so much water around it that its name was Kern Island.

Bakersfield is still an island—perhaps California’s largest isle—at least in the ways its people live and think. The hometown of Kevin McCarthy, the highest-ranking GOPer in the U.S. House of Representatives, is a redoubt of reactionary Republicanism, surrounded by a state turning ever bluer. But what really makes Bakersfield an island in the agricultural San Joaquin Valley is its economic devotion to oil.

The vista from Panorama Park demonstrates this, to a shocking degree. To your left, an oil refinery is in view. Beyond the river vista near the bluffs, massive oil fields stretch north for many miles, further than your eye can see. Indeed, the oil fields here so dominate the landscape they remind me, perversely, of the giant trees not far away in Sequoia National Park. The oil patch, like the sequoia groves, is too grand in scale for a human field of vision, or even to be easily photographed.

Kern River Oilfield, discovered by prospectors in 1899, helped turn California into America’s leading oil producer in the early 20th century. It brought people from around the world to work and live here. From Panorama Park you can see the community of Oildale, where Merle Haggard grew up in a boxcar, and later wrote a song about it:

Haggard would popularize the brand of country music known as the Bakersfield Sound. You can visit his family boxcar at the Kern County Museum, just two miles from Panorama Park. Poor people, successors to the Haggards, still live around Oildale, and still pay too much for sub-standard housing.

The Kern River Oil Field has produced 2 billion barrels and counting. But its output has fallen dramatically since 1985, propped up by pushing steam into the wells to draw out the sticky oil that remains. This is an extraordinarily costly practice, both economically and environmentally, and support for the oil business is not bottomless, even here. A court recently ordered Kern County to halt new oil permits. From Panorama Park, you’re looking at an industry in decline.

Bakersfield is changing in other ways, too. If you stand in the park and turn away from river and the oilfields, you’ll see Alta Vista-La Cresta, one of the city’s older neighborhoods. The Alta Vista tract was first laid out by Donald McClaren, son of famed superintendent of San Francisco’s Golden Gate Park, John McClaren. This neighborhood was once a distinguished address—its denizens enjoying those grand views—but the area has been fading ever since Bakersfield expanded west, to the other side of Highway 99, and richer people bought places in neighborhoods like Seven Oaks.

The Panorama Vista—specifically, the area between the bluffs and the oil fields to the north—has been the focus of successful restoration for more than a generation. It’s been called the Panorama Vista Preserve since 2004, and visitors there enjoy trails and a native plant nursery.

It’s not hard to imagine the preserve growing larger, and the vista changing. As California responds to climate change, the state will turn harder against oil. In the 50 years, the pumpjacks might well be gone, replaced by park space, solar energy farms, or some of the new homes California needs to build.

These days, water already feels like a far more precious commodity than oil. And this land, if restored to its original condition, might fill with it. Will some dams be removed? Will the vista become wetter again?

The view from Bakersfield really makes you think.