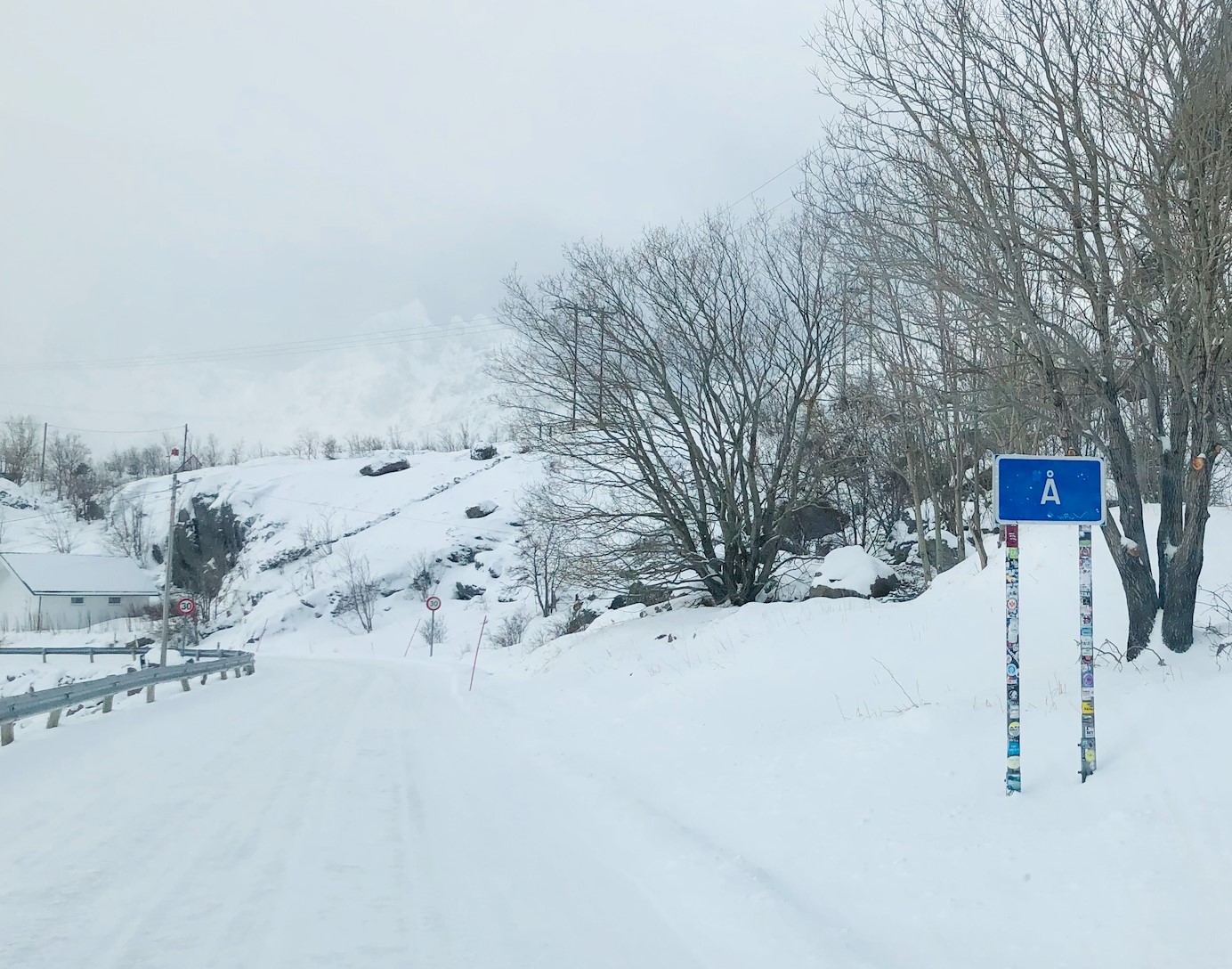 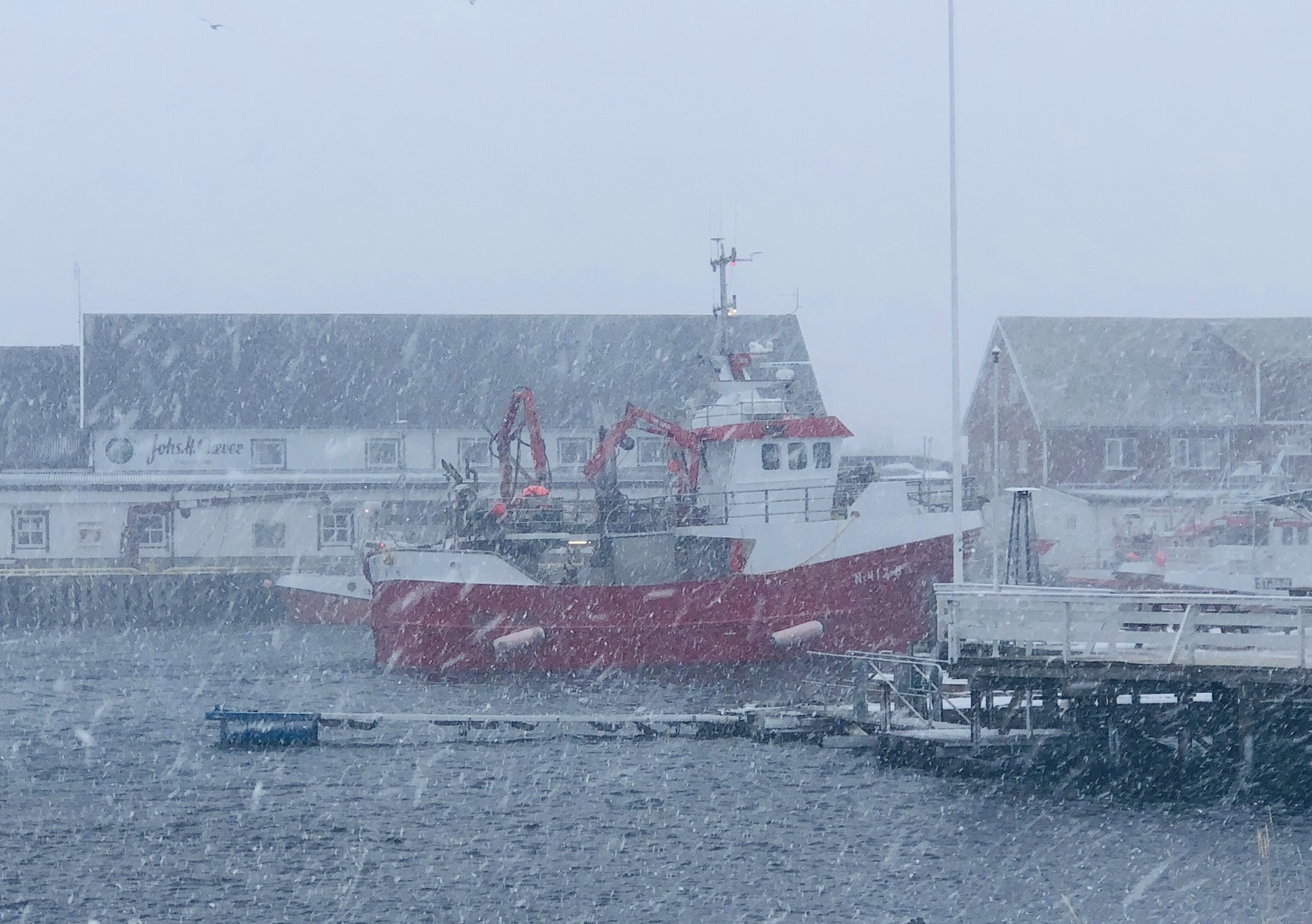 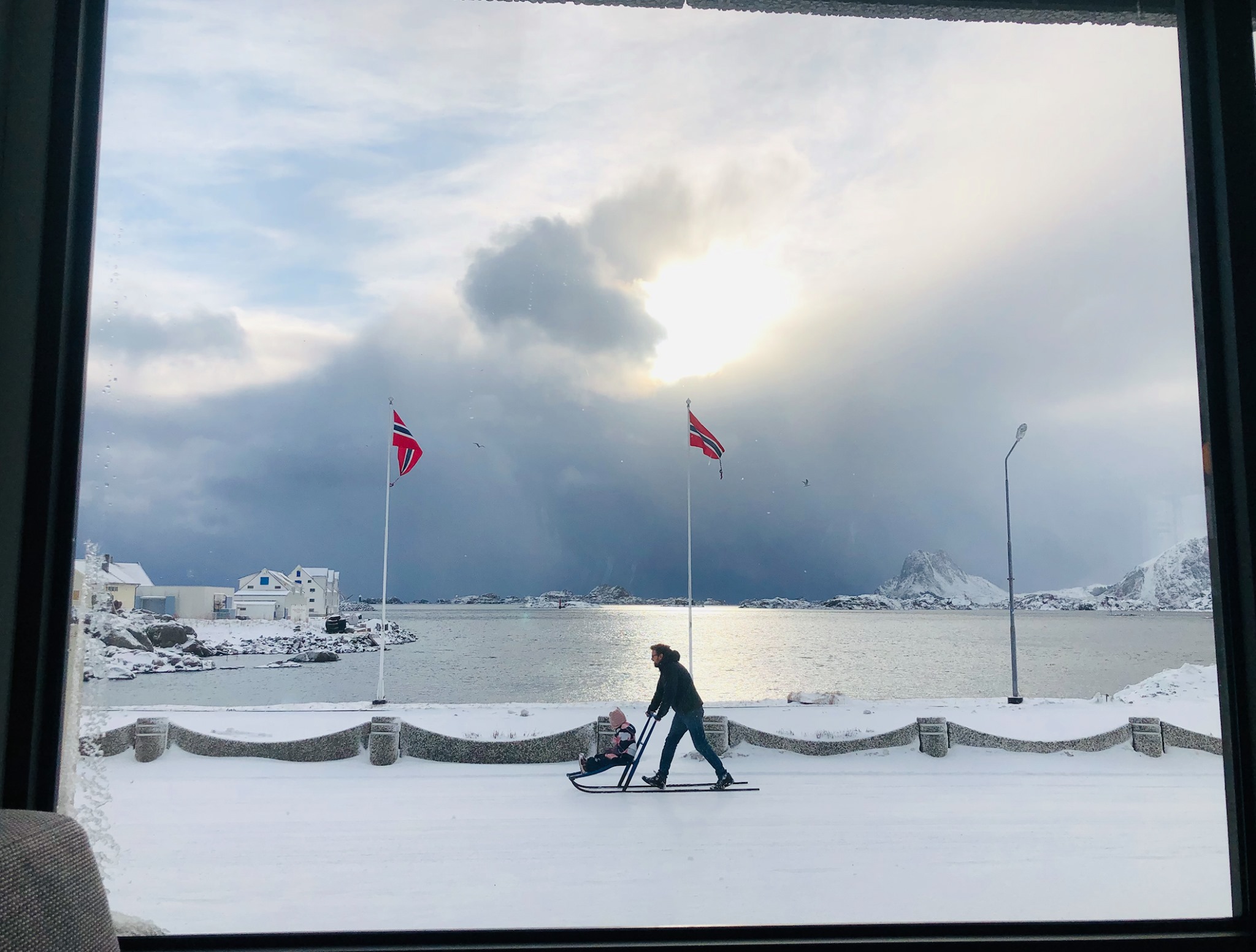 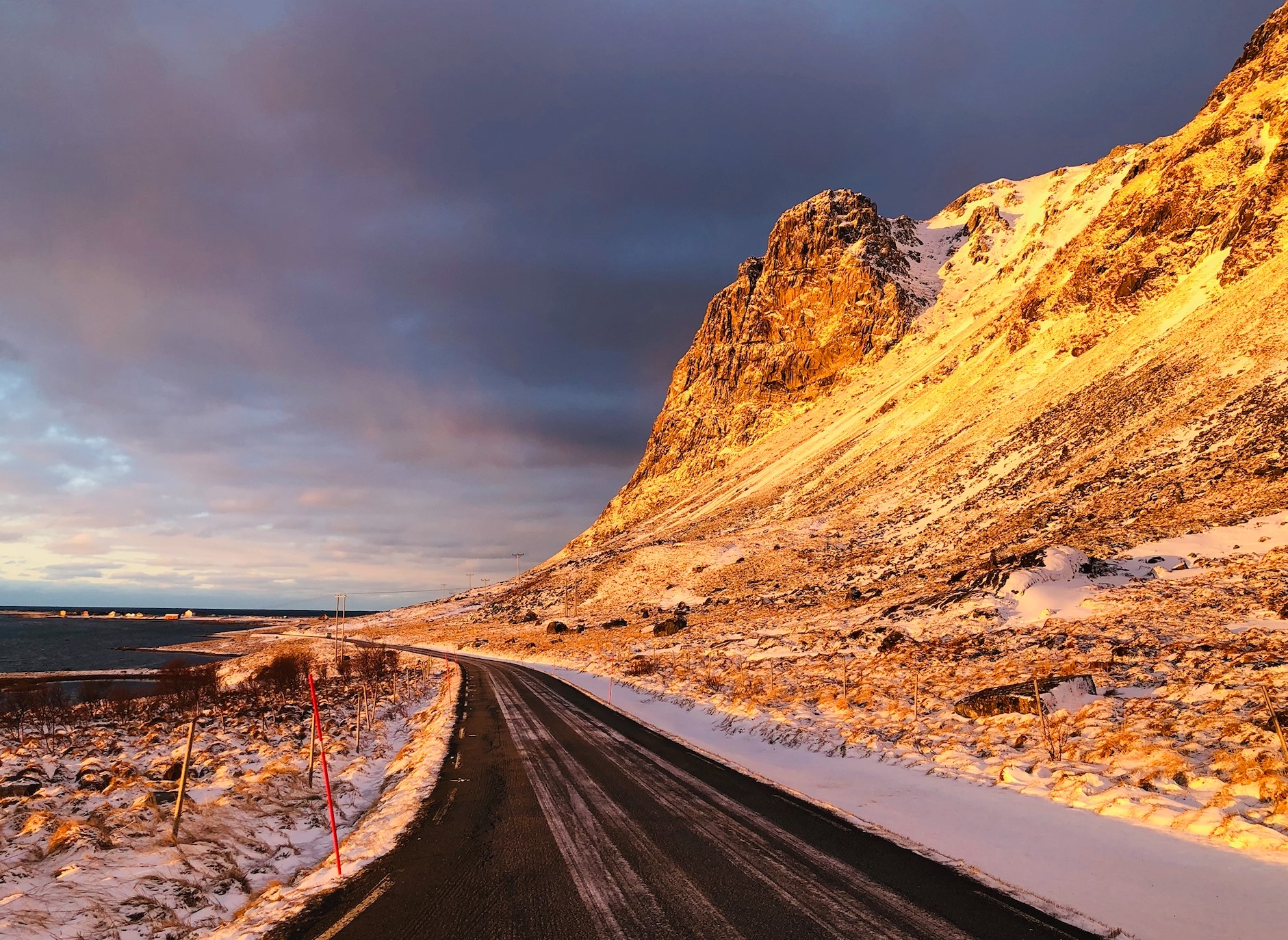 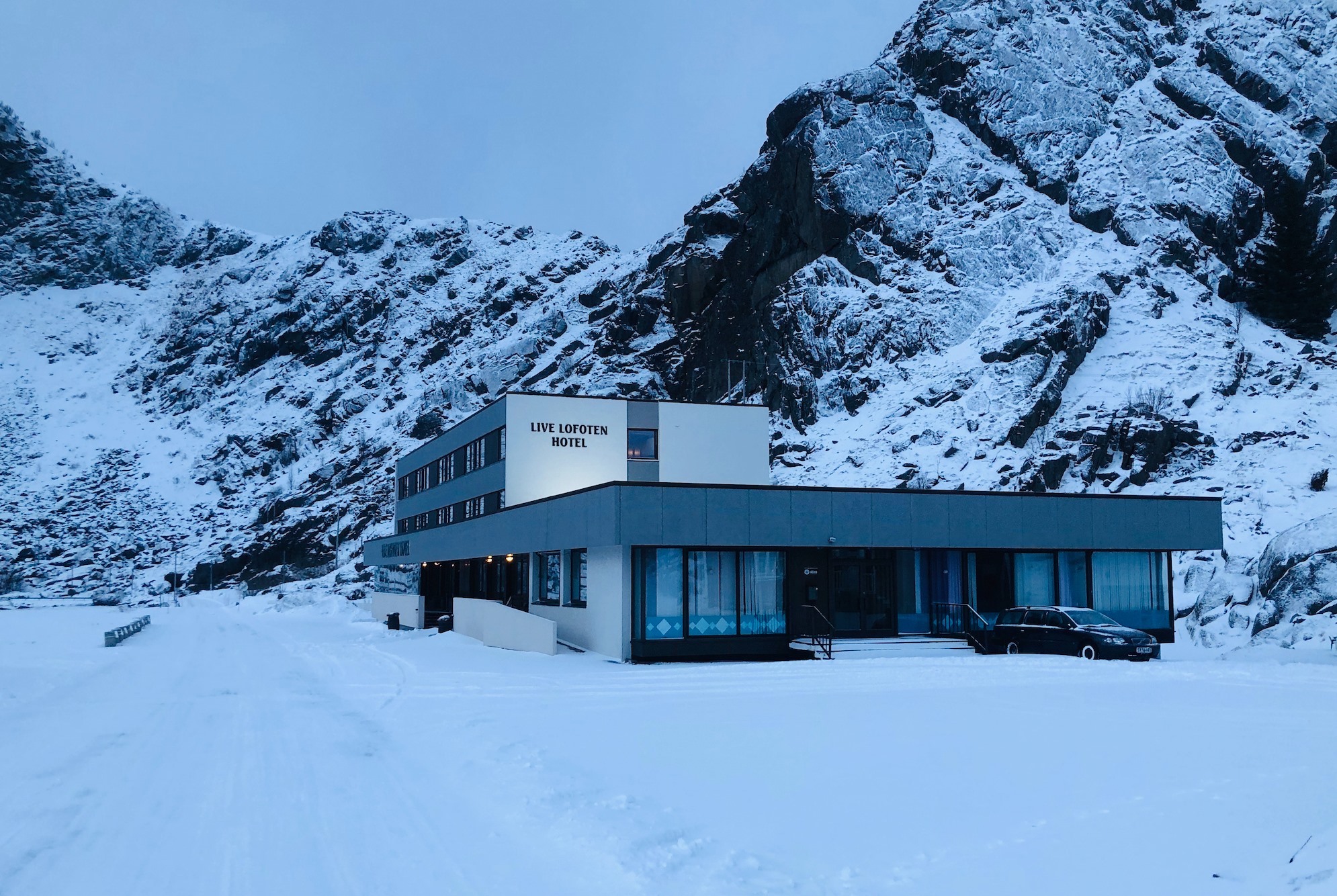 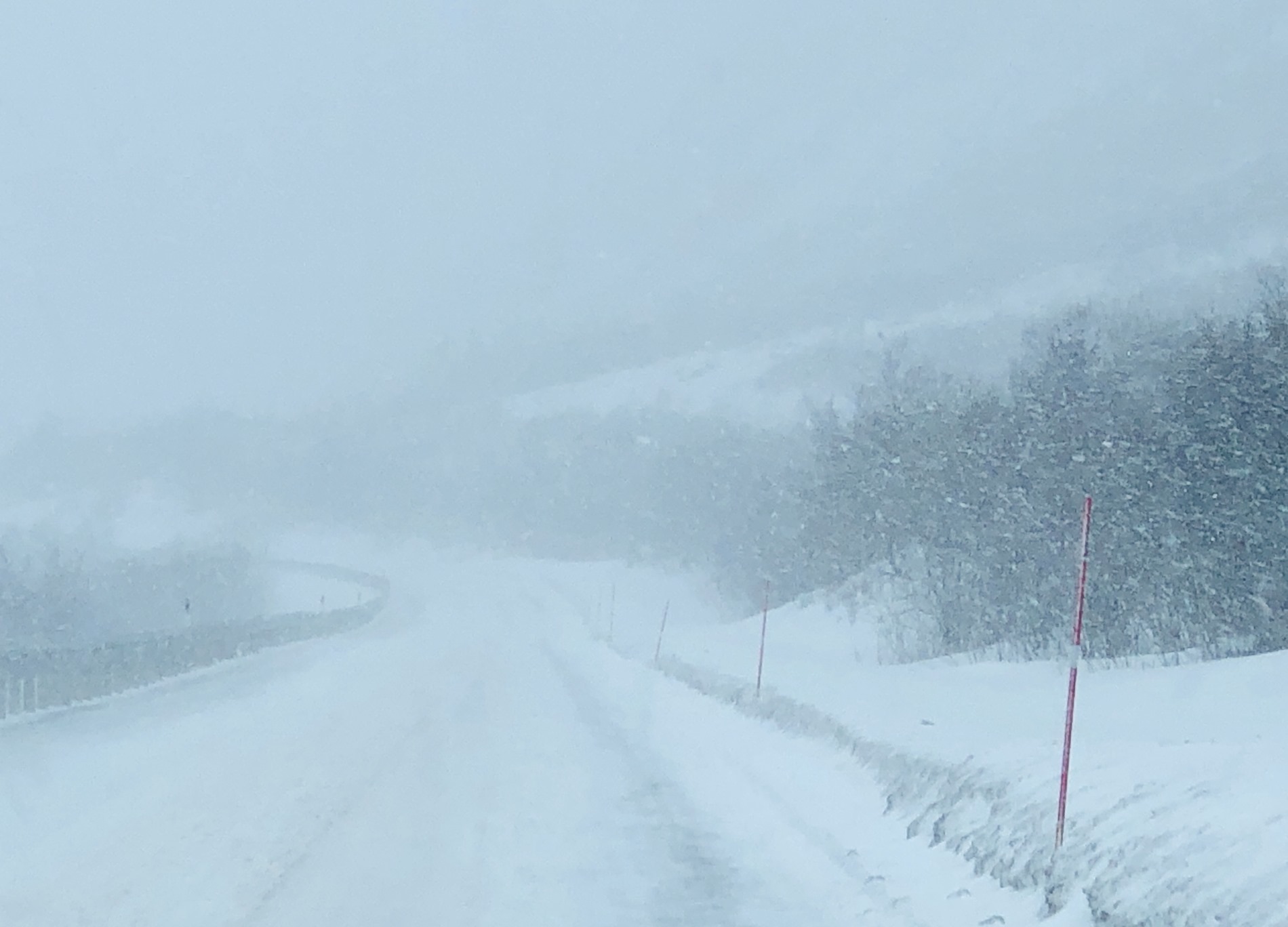 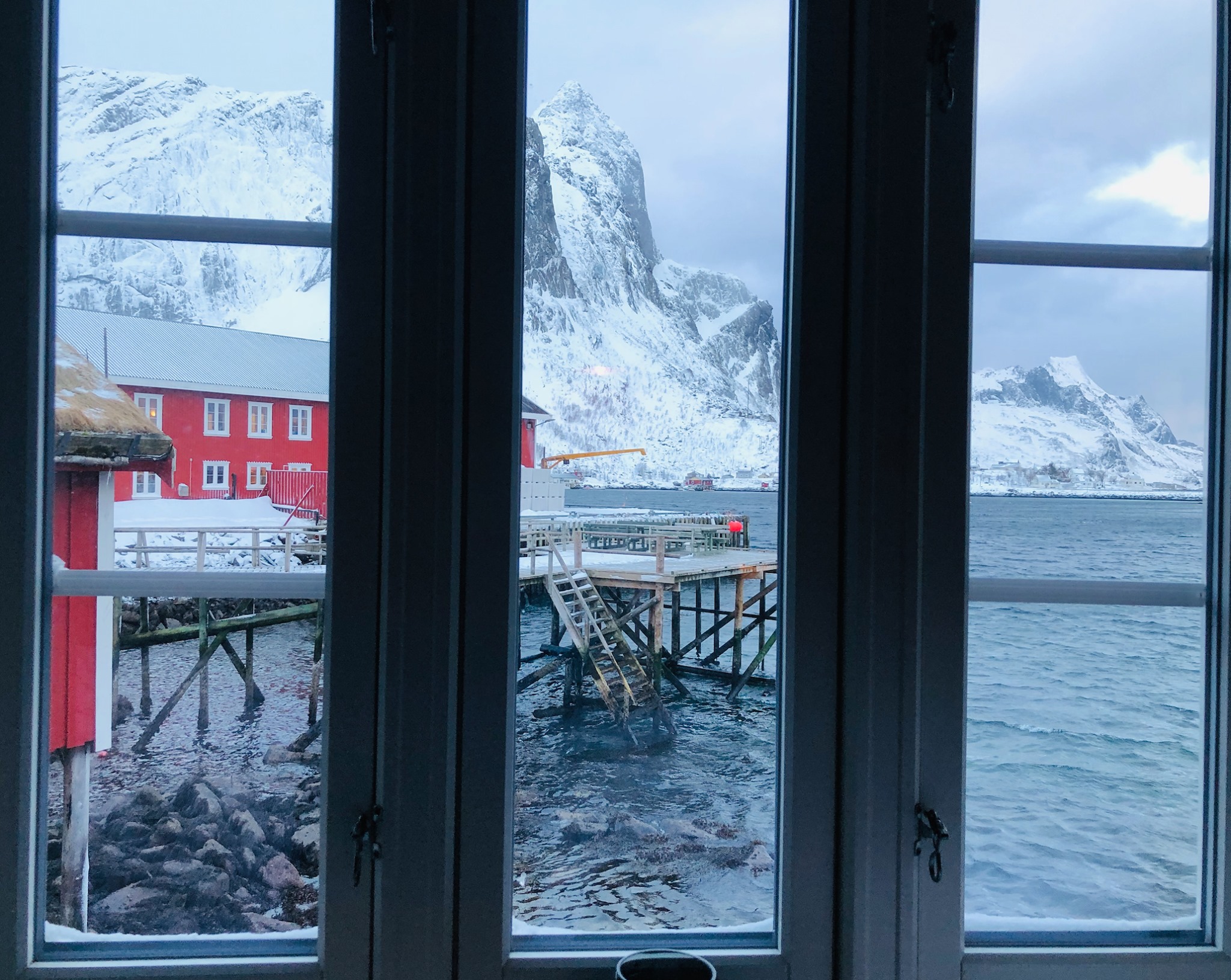 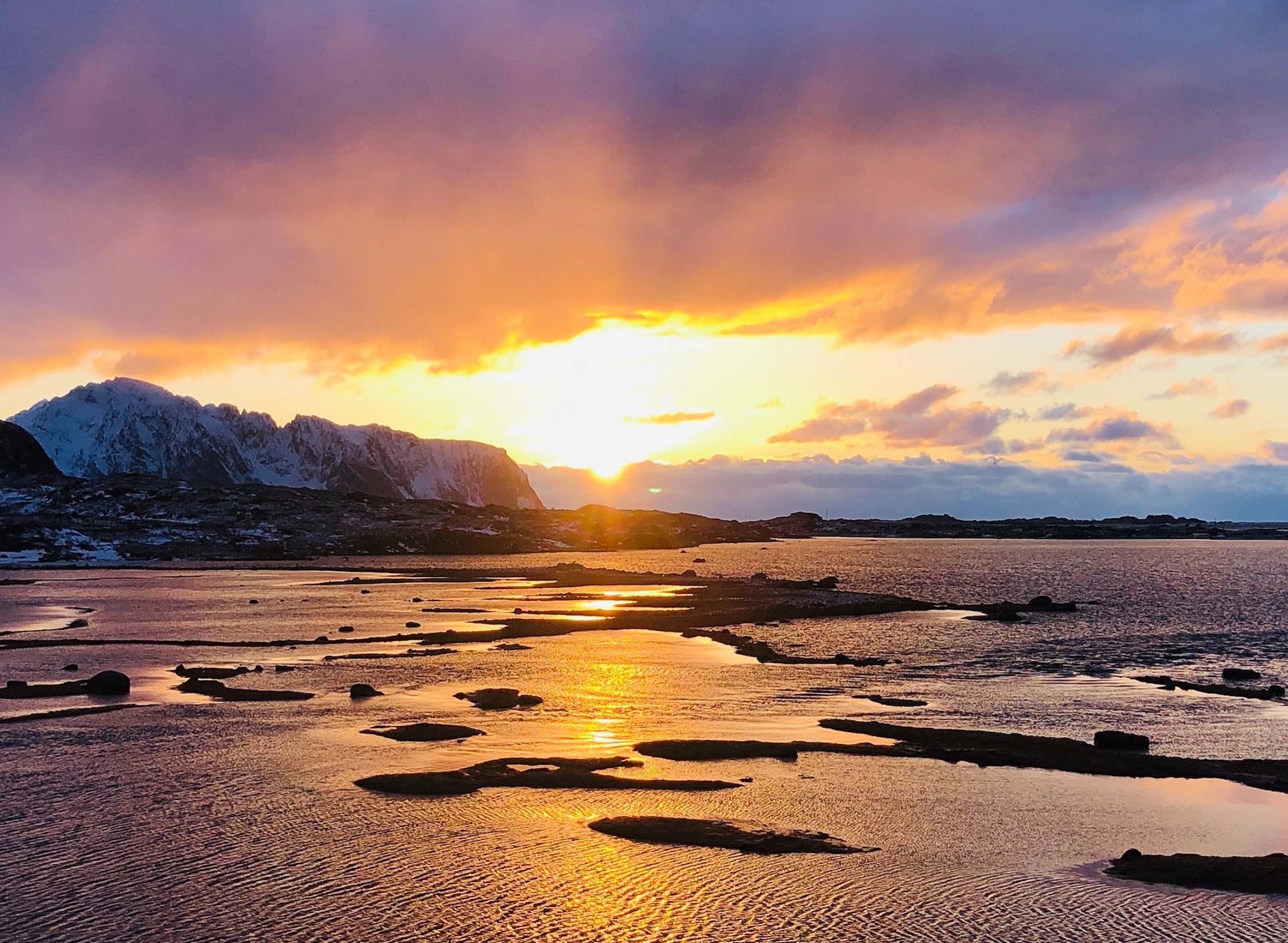 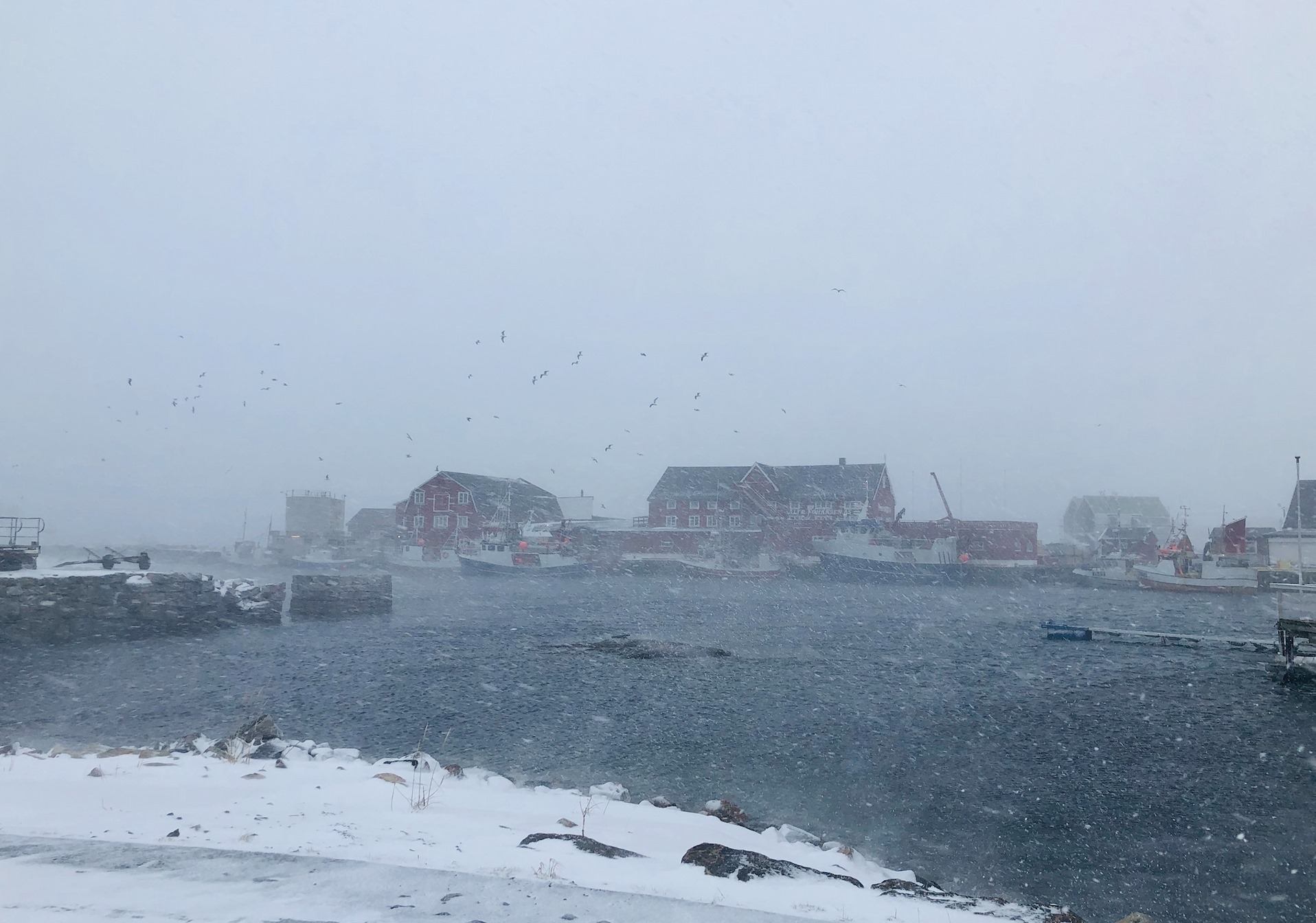 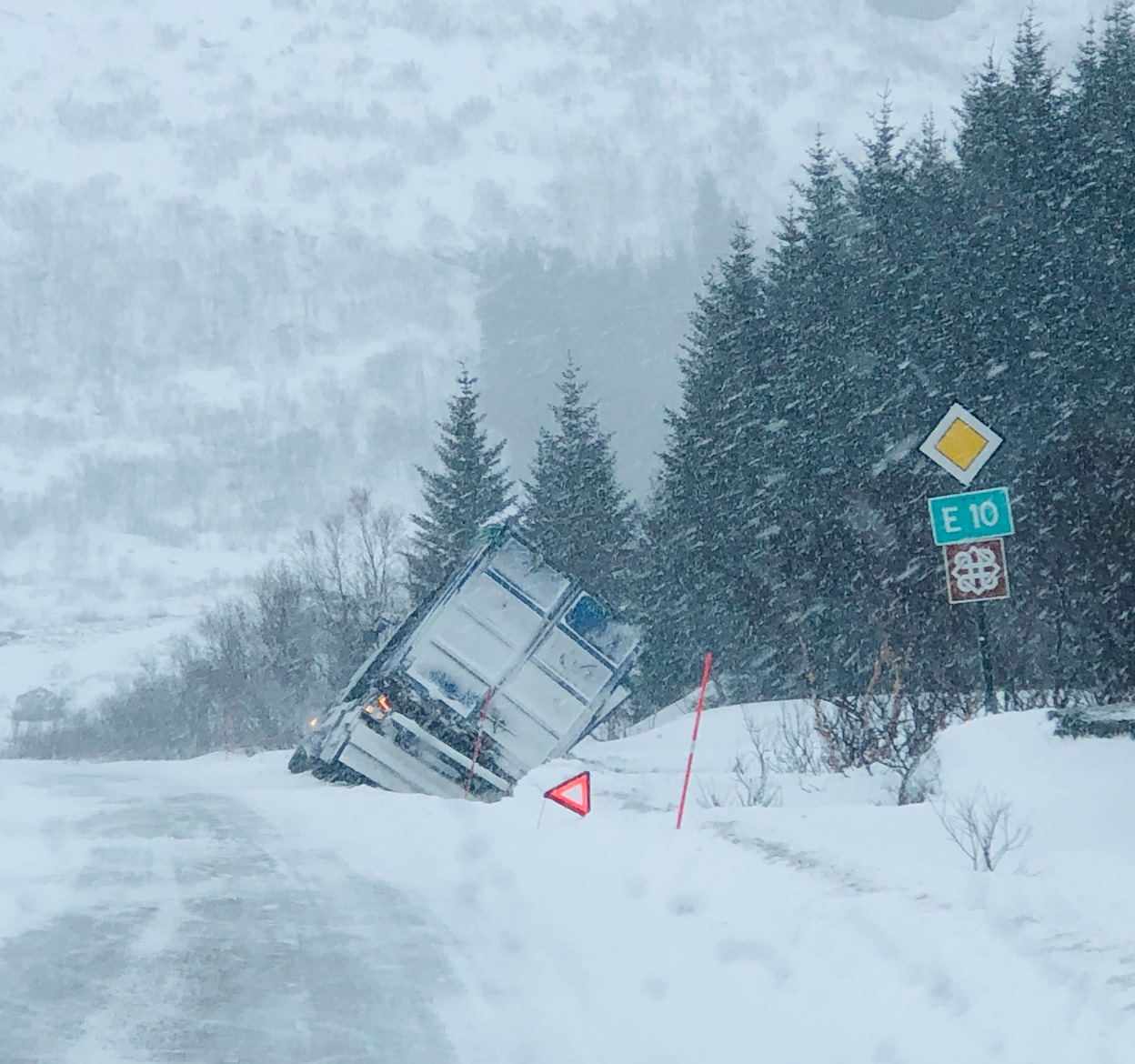 On a stormy day in mid-March, I found myself the very last man outside in the Norwegian village of Å.

Located on a remote island in the North Atlantic, the village of just 100 people had closed its schools the week before; restaurants and hotels never reopened after the new year holiday season. And now my last glimmer of hope for a hot coffee this morning—the “Bakeriet på Å”—had closed.

As the Northern European Correspondent for the Swiss Broadcasting Company, I must rove around a reporting area that extends from the far north of Greenland to the very south of Lithuania. Å, which is as tiny as its name, sits close to the geographic center of my beat. This is a friendly and open part of the world, where you cross borders without thinking about them. People here in the Arctic Circle exhibit unusually closeness and cohesion, and ever since my visit to the far north as a teenager in the 1980s, my trips to the lands and seas near the North Pole have always felt like homecomings.

But this time, I reach Å on the same morning that the central government announces an immediate lockdown of Norway to prevent the spread of COVID-19. It is a startling announcement that sends me scrambling to come to terms with what it means for an open region to shut down—and to find a way home before it’s too late.

In Å, the snow is falling heavily, and I don’t catch a glimpse of anyone stirring through the contracted curtains that cover the windows of Å’s picturesque and colorful houses. My requests to interview some local fishermen go unanswered. I can’t blame them. Overnight the government in the capital Oslo—more than 1300 kilometers southward—has declared all foreign visitors to be undesirable persons. I am officially a threat to public health.

I wanted to talk with fishermen because the economic backbone of the Lofoten archipelago is fishing. In spite of the islands’ position—at the same latitude as Northern Alaska—temperatures seldom go below zero Celsius (32 F). The reason for this has a name: the Gulf Stream. Early in the year, this relatively warm Atlantic current drives gigantic schools of fish into the Bay between the Lofoten chain of 80 islands and the mainland of northwestern Norway. For the fishermen of Å and dozens of other villages and towns in the archipelago, it is possible to catch enough cod and pollock in these few months to secure a full year’s income. It is why the islanders call the fishery “our treasure chest in the sea.”

Unable to talk with the fishermen, I make my way through thick snow towards a small factory, where I might find someone to interview. But all the doors I try remain closed. On the car radio, I hear the sober voice of a Norwegian radio announcer read a long list of measures decided by the national government: “By Monday morning at 8 a.m. all our national borders will be closed,” the announcer says, adding that after it will be “guarded by the military.”

Remi Solberg, the mayor of the outer Lofoten archipelago, whom I had met for an interview just a few hours before the shutdown, punctuated the national regulation with a mayoral decree: “All visitors from outside the Lofoten islands are immediately banned and must be quarantined for 14 days.”

That left me just 36 hours to escape, or face two weeks of quarantine. And escape would require reaching the mountainous border station between Norway and Sweden, my country of residence.

A few years ago, when the virus spoken about locally was the one savaging the local salmon, the fishing industry set up a comprehensive infrastructure to test fish for viruses. Now, that infrastructure is serving local hospitals where a large number of humans are now being tested for the coronavirus.

In normal times, it’s easy to leave the archipelago. Here is where the iconic E10—the European highway connecting the Baltic Sea in Luleå (Sweden) with the Atlantic Ocean in Norway—ends dramatically on a cliff falling into the sea. Seventy years of European peace have made borders an afterthought as we freely traveled to the most remote parts of the continent. But this time, the odds are against me.

Going through a checklist of possible transportation options, I quickly realize that I need to be both innovative and lucky. Harsh winter storms have closed the highway and many of the very narrow roads across the islands. There are no trains that will go where I need. And the few propeller plane connections onto the mainland were either grounded because of the storm, or fully booked weeks ago.

Most of the time, crowds are the concern—National Geographic has ranked the Lofoten among the world’s most beautiful islands, and since 2010, a crush of tourists has confounded residents. “Last year we got 1 million visitors, that’s too much for our pristine archipelago,” said Mayor Solberg.

Still, while overtourism is an issue for the Lofoten, the bigger threat, for decades, has involved oil. Norwegians depend on royalties they received for their country’s oil production, and there have been longstanding plans to extend oil production fields into the far north. Young ecologists and senior fishermen have fought bitterly, and sometimes together, against such a move, which could threaten both the natural beauty and the lucrative fishing business.

Not long before I arrived, the local nature lovers and fishermen had triumphed when the conservative government in Oslo agreed to table its search for oil outside Lofoten.

This decision was touted as preserving a fishing tradition that goes back at least 6,000 years. And in the era of the COVID pandemic, that experience suddenly paid dividends. A few years ago, when the virus spoken about locally was the one savaging the local salmon, the fishing industry set up a comprehensive infrastructure to test fish for viruses. Now, that infrastructure is serving local hospitals where a large number of humans are now being tested for the coronavirus.

I wanted to learn more about what the remote islands can teach us in this strange time, but I knew I needed to get home. A local Norwegian journalist generously agrees to drive me across several of the Lofoten Islands, connected by bridges and tunnels, to the small harbor city of Stamsund. There, the last ferry boat is supposed to depart for Tromsø, on the mainland, in the evening.

In Stamsund, I find myself the last man around, sitting totally alone in the cozy lobby of the Live Lofoten Hotel, which the lockdown has emptied of all visitors. And I am also the only traveler to board the MS Polarlys on its 18-hour crossing to Tromsø. It is a truly gloomy feeling to be on one of the last overnight rides. The ferry company Hurtigruten was founded in 1893, and it normally connects more than 30 Norwegian ports. Now, because of the virus, only two boats are running. And I am on the final one.

Tromsø, northern Norway’s biggest city with more than 70,000 inhabitants, is sometimes called the “Paris of the North” because of the great density of bars, restaurants, and coffee shops. But now, when I arrive there is nobody to be seen.

I make my way through empty streets to the bus station, where one of the last long-distance buses to the Norwegian town of Narvik is about to depart. The bus driver does not even bother to sell tickets—he does not want to risk interacting with passengers. I board and we leave Tromsø according to schedule for a four-hour trip, during which we see—and overtake—many military vehicles on their way to various border posts. Older residents of this part of Norway still tell stories about a time in the beginning of the Second World War when fierce battles were fought around the Lofoten island between the Nazi occupants and the British naval fleet. Now the fact that the military is out again means that the circulation of daily life is stopping.

The bus reaches Narvik, but that still does not get me to Sweden. Narvik is considered a border town, but that’s just because it’s the town closest to the border, and it has a harbor. In fact, it’s still 50 kilometers from the soon-to-be-closed Swedish border. The only way for me to get to the border now is to catch a ride up a mountain road that has been closed for days because of heavy snow.

But I am fortunate. As the bus approaches Narvik, I check the Norwegian Road Administration app, and—Eureka!—the road has just reopened, at least for now. I manage to convince the local taxi company to send me a car to pick me up and drive me across the border, where concrete elements stand ready to block the crossing just a few hours later.

While the whole of Norway is entering into COVID-19 hibernation, Sweden tries to keep up a more ordinary path, asking people to keep distance without going into full lockdown. On the way, the taxi driver, whose name is Pernille, talks of the spring that lies ahead. She will have time to enjoy it. “This is my last assignment before I am laid off tomorrow,” she tells me.