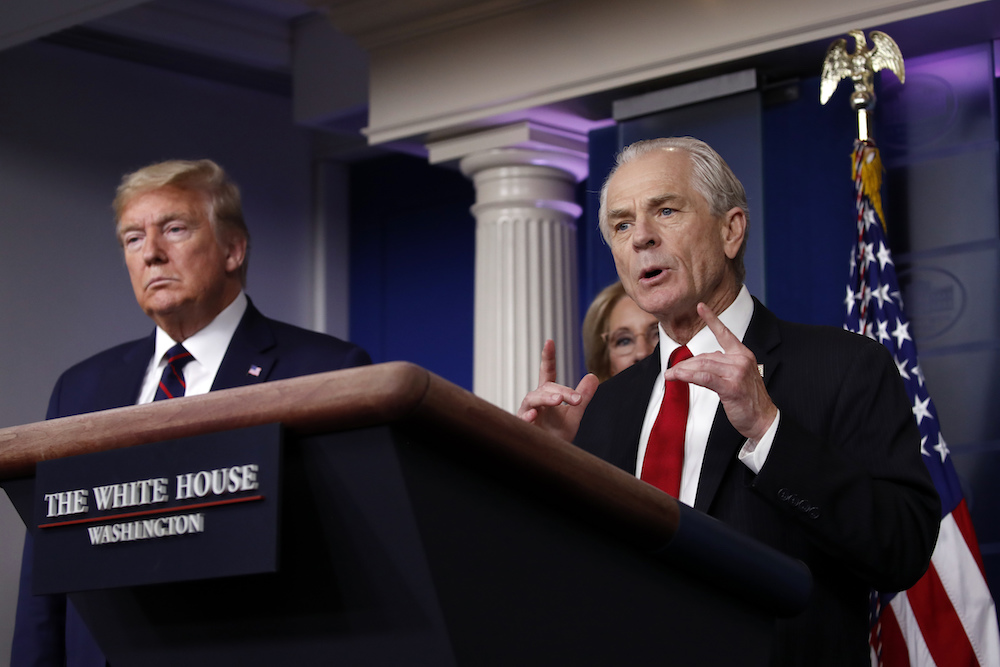 In the 20th century, we learned the Peter Principle: if you seek to rise in a hierarchy, you’ll get promoted until you reach your level of incompetence.

In the 21st century, we must learn the Peter Navarro Principle: if you’re maniacally angry and relentless in accusing others, your incompetence will be no obstacle to your rise.

That’s the career arc of Peter Navarro, who now is a leader of the White House’s efforts to reopen the country and produce enough medical equipment to protect America from COVID-19. So for all the frightening aspects of this moment—the rapid spread of the virus, the rising death toll, the lack of a vaccine—it’s even more chilling to think we’re dependent on this Californian to curb the biggest pandemic of our lifetimes.

It’s especially scary for San Diegans who knew him as a local politician. One book about his furious and failed political career called Navarro “the cruelest and meanest son of a bitch who ever ran for public office in San Diego.” If that doesn’t curdle your blood, this will: the author of that book was Navarro himself.

The tale of how one of San Diego’s worst politicians rose to power during America’s worst crisis since the Second World War is not about just one man. It’s a lesson about what kinds of people prosper when a nation’s civic conversation becomes dominated by anger and accusation.

Navarro’s career is often recounted as a mystery, centered on an apocryphal political about-face. How did a Democrat who sounded like San Diego’s Bernie Sanders in the 1990s and 2000s turn into a leading Trumpist?

But Navarro’s life is not really all that mysterious—it’s actually a highly consistent story of a man thoroughly devoted to the dark art of accusation.

Navarro was a working-class kid from the East Coast who earned a doctorate in economics from Harvard. His thesis, characteristically, was built around an accusation: that special political interests were “stealing America.” He joined the faculty at UC Irvine.

In San Diego, he soon made himself the area’s most prominent NIMBY. Navarro founded Prevent Los Angelization Now, an anti-growth group devoted to attacking anyone who dared to build housing or infrastructure.

Running as a Democrat, Navarro quickly jumped into local politics, and might have won high office—if not for his addiction to accusation. In 1992, with a huge lead in San Diego’s mayoral race, Navarro foolishly attacked his more conservative opponent Susan Golding over her ex-husband’s conviction for laundering drug money. Navarro’s attack was so gratuitous it created sympathy for Golding, who cried in the debate and rallied to win the race.

Just as Navarro’s campaigns became a joke in California, his books were not taken seriously in the academy. But the ridicule of Navarro didn’t matter, because in his devotion to anger and accusation, he was actually ahead of his time.

The rejections spoke volumes. San Diego may be sunny but it has a history of electing difficult or divisive people, including mayors from Pete Wilson to Bob Filner. But San Diego drew the line at Navarro. Larry Remer, who’s worked as Navarro’s campaign consultant, recently called his former client “the biggest asshole I’ve ever known.”

True to form, Navarro did not stay classy in defeat. Instead, he published an accusatory book, San Diego Confidential. In the guise of a how-to guide for political candidates, it gleefully recounts every accusation of his campaigns, describes various San Diego figures as ugly and stupid, and airs sexual gossip about opponents.

Navarro gave up elected politics in the 2000s, but didn’t abandon accusation. The professor began publishing finger-pointing books with names like Death by China. His critiques went beyond criticism of the Chinese government’s human rights abuses and trade policies, veering into overtly racist claims. The books were peppered with “expert” quotes (“You’ve got to be nuts to eat Chinese food”) purportedly from a businessman named Ron Vara, whom Navarro made up as an anagram of his own name.

Just as Navarro’s campaigns became a joke in California, his books were not taken seriously in the academy. But the ridicule of Navarro didn’t matter, because in his devotion to anger and accusation, he was actually ahead of his time.

The internet was his opening. Navarro’s constant, over-the-top accusations were catnip to online trolls and right-wing media. With mainstream conservative intellectuals fleeing the Republican Party, Navarro had the political field wide open to sell himself and his attacks.

Navarro soon came to the notice of Donald Trump, who hired him in 2016 as a campaign advisor, and in 2017, gave him a top role on trade policy.

In the White House, Navarro was at first sidelined by mainstream aides with better credentials and social graces. But such internal rivals were no match for the abrasive Navarro, who routinely demeaned and undermined colleagues to win the confidence of Trump, a fellow master of accusation. By 2018, Navarro was using his growing influence to promote destructive trade wars with American allies, from Mexico to Canada to Europe.

When you make constant accusations, sometimes you’ll hit the right target. This January, Navarro, ever on the attack against China, wrote a prescient memo predicting that COVID-19 would become a full-blown pandemic. But, according to press reports, Navarro’s reputation for anti-China invective allowed others in the White House to dismiss his views as overly alarmist.

By March, Navarro had been given the most important task in the country: working with companies and other countries to secure medical supplies and machines for the pandemic response. But in this role, he was tragically miscast. For all his skill in accusation, Navarro had no experience in ramping up a large cooperative effort, and the administration’s failure to deliver the needed supplies has left states to fend for themselves.

The San Diegan still finds the time for accusation. Weeks ago, reports surfaced that Navarro launched a bitter personal attack on Dr. Anthony Fauci in the White House situation room. Navarro also publicly advanced the dubious claim that the malaria drug hydroxychloroquine would work as a treatment for COVID-19.

Perhaps you cling to the romantic notion that karma will catch up with a man such as Navarro. Or perhaps you believe that other officials or the media will hold him accountable. Maybe in another country, or at another time. But not now, and not here, in the United States of Accusation.