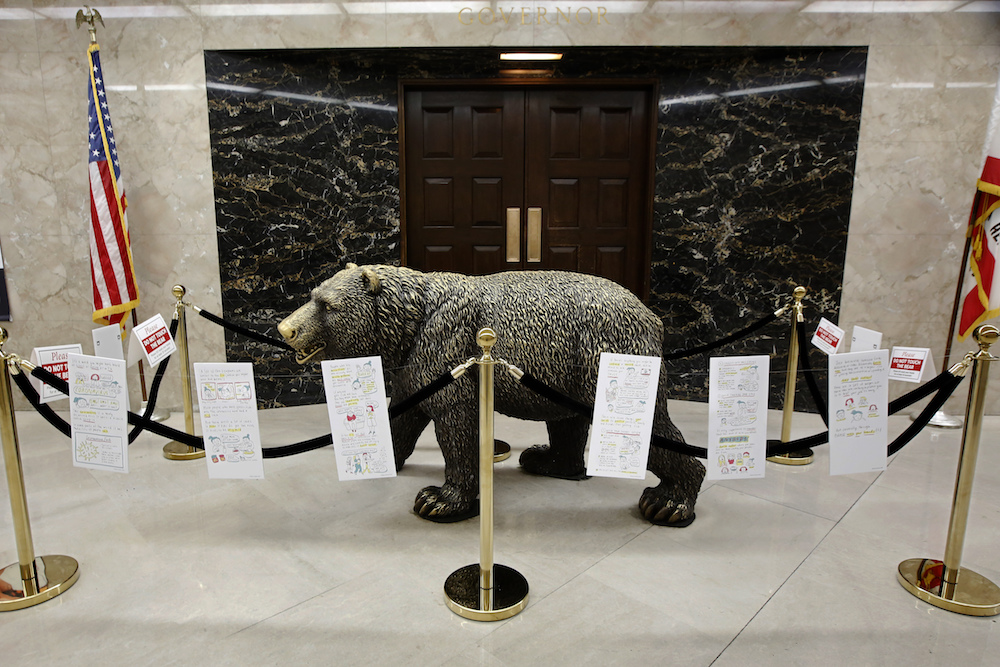 In another coronavirus precaution, California officials cordoned off the “Bacteria Bear," a favorite backdrop for photographs and selfies by school children and other visitors to the state capitol in Sacramento. Courtesy of Rich Pedroncelli/Associated Press.

Coronavirus is forcing Californians to isolate themselves. But it has brought us together in one big way: by fusing all of our biggest problems into one colossal crisis.

That crisis could be our once-in-a-lifetime opportunity to transform the state—if we can ignore the conventional wisdom that this is a time to shelter our ambitions in place.

For Californians, COVID-19 is a crisis of crises. It merges together a collection of failures that most of us consider separately—housing, energy, poverty, prisons, courts, schools, climate, health care, immigration, pensions, taxes and budgets, and governance. COVID has exposed how these disparate crises, for all their complicated pieces, share the same fatal flaw: California’s longstanding inability to invest in the future.

The Golden State loves making big progressive promises, but resists the hard work of delivering on them. So the state has provided health insurance to millions via Obamacare and MediCal, but, as COVID should remind us, has not produced enough medical personnel and facilities to provide effective and timely health care for all. The same California leaders who now urge us to stay at home have presided over massive shortages of homes, and our ubiquitous homelessness.

Our elected officials frequently pose as champions of the poor and of children, even though this state has one of the nation’s highest childhood poverty rates. COVID-19’s economic shutdown will only deepen that. Our schools, which are supposed to close the gap between rich and poor kids, are closed indefinitely by the virus, and the state’s hastily planned shift to online learning is cutting off poor students who don’t have access to technology. The cliché is that kids who are failed by schools end up in prisons or jails, but in California, it’s hard to find space in those places. Correctional facilities are so overcrowded that the state must release prisoners to limit COVID transmission.

California’s crises involve not just facilities but people. COVID exposes our failure to develop our workforce—from the lack of highly trained workers for lab and health jobs to the lack of farmworkers to keep up the food supply, to the lack of utility personnel to keep our electric grid from starting wildfires. If warmer temperatures bring wildfires during the pandemic, it could trigger crippling power shut-offs and crush our overtaxed emergency services. COVID also threatens a deal PG&E made with previous wildfire victims (because the deal was based on PG&E’s now faltering stock). The failure of that deal could damage California’s climate change response, which depends heavily on utility investments in alternative energies.

All of the above crises have been nearly impossible to solve because of the state’s weak systems for budgeting, taxation, and pensions. Now COVID-19 puts those systems under almost unbearable pressures. As COVID creates the need for more government outlays, the byzantine formulas of our dysfunctional budget system will produce spending cuts. Economic collapse is creating massive drops in tax revenues. And the stock market plunge puts our already badly underfunded pension systems at risk of collapse—which could require a bailout we couldn’t afford even before the COVID crisis.

As bad as all this sounds, there is another thing that is even worse: the timid response that California is now planning to this mega-crisis. Look for state and local officials to crawl into a shell and try to weather the storm by spending less.

Previous failures of the cower-and-cut strategy, and the massively snowballing COVID crisis, argue powerfully for a new approach: This is the time for California to ramp up spending and services like never before.

I am not overstating this. Gov. Gavin Newsom already has junked his ambitious January budget proposal and now plans a “shelter-in-place” budget that could include cuts to schools and health care. Such an approach reflects the tired conventional wisdom in Sacramento: that a crisis is not a good time for big solutions to big problems, and that the wise path in a California crisis is to scale back and limit the damage.

That conventional wisdom is—to use a highly technocratic term—totally nutso.

Cutbacks and frugality now will worsen all our existing problems and crises, and make recovery from COVID that much harder. Indeed, cutting the major California sectors of education and health care will be doubly destructive, weakening the state’s economy in the near-term, while diminishing crucial services for the long term.

How do we know that this frugality will fail us? Because that’s what happened the last two times the conventional wisdom held sway—in the early 2000s tech collapse and energy crisis, and in the Great Recession. In both cases, the state’s conservative response to crisis did lasting damage to the economy, budgets, and vital programs—and to a generation of California children.

In fact, cuts from those last two recessions are responsible in part for the crises we faced even before COVID. Some cuts—notably Gov. Brown’s slashing of mobile hospitals and medical equipment stockpiles—are now making pandemic response harder.

Previous failures of the cower-and-cut strategy, and the massively snowballing COVID crisis, argue powerfully for a new approach: This is the time for California to ramp up spending and services like never before. It’s not enough to address just the current emergency. Instead, let’s seize the moment to tackle all the crises that COVID has turned into one big crisis.

So let’s do it all. Make the temporary COVID expansion of health care capacity permanent. Do the same for all the temporary housing we’re now finding for the homeless. Sweep away the California environmental and licensing regulations that limit housing construction and stall business growth. Build previously stalled infrastructure projects. And increase school budgets by 50 percent, as multiple studies have suggested California should do, to close achievement gaps and properly support special education.

If California did all this, we’d actually be the national progressive model we’ve long pretended to be. We’d also demonstrate that we’re too smart and too rich to pursue yet another stupid and miserly response to yet another crisis.

How do you pay for such transformations? In every way possible. Reform the outdated tax system to produce higher revenues and less volatility. Loosen budget formulas to make it easier to move money around. And, yes, cancel our unsustainable pension promises and unfunded retiree health benefits for public workers.

Even higher taxes and retirement clawbacks won’t be enough, of course. Californians will need more from the federal government. And we should get over our debt hang-ups and borrow big sums at today’s low rates. Yes, those bills will eventually come due. But when they do, California—if it uses this moment to advance rather than retreat—should be much stronger in economy and infrastructure and services, and thus much better able to reckon with those debts.

What I’m proposing is a big bet on California’s future. But it’s hardly reckless. Buying low is a proven investment strategy. It’s also the right response to the extraordinary moment we’re living in. Californians have put their lives on hold; millions of us are losing jobs and income, and thousands are dying. Our crises, having converged with corona, are inescapable. Do we really think the lesson of this moment is to further shrink the state’s capacity, fail to reckon with crises, and diminish our future?

Instead, let’s honor today’s sacrifices by advancing, rather than retreating. Let’s put the state on a higher plane. Let’s push all our chips to the table’s center, California, and go all in. Right now.