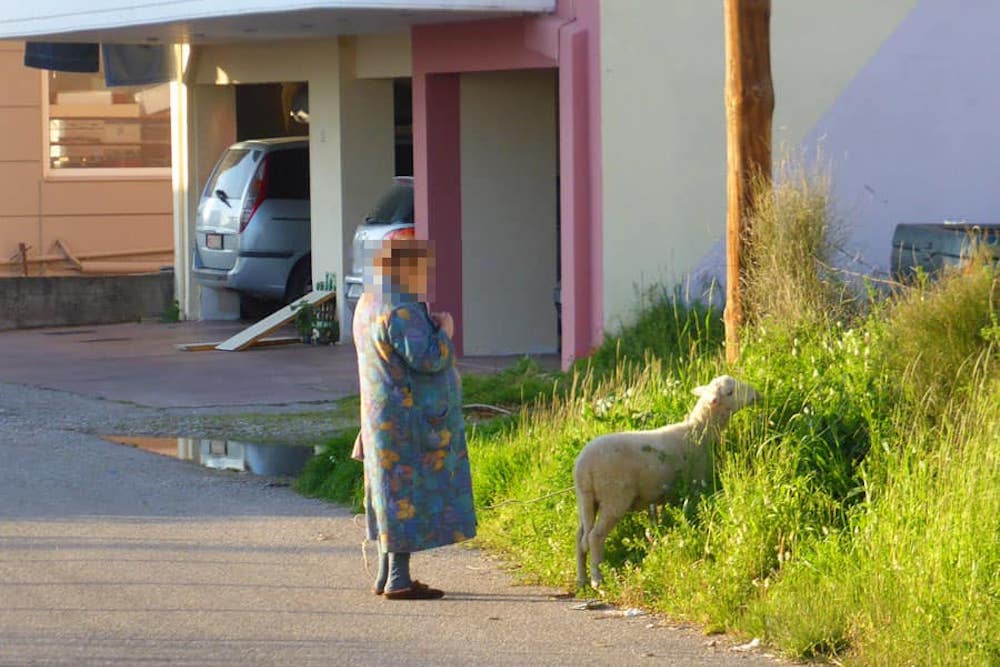 This photo of a woman with her sheep was one out of many articles that were written regarding how the Greeks behaved during the lock-down.H/T AgrinioPress.

For Athens, I am in the middle of nowhere. It’s early morning, and I have walked up the hill that overlooks our apartment building with my dog, Skeletor, a young, energetic cocker spaniel. I purposefully avoided the cobblestoned path that surrounds the hill in favor of the craggier natural trail because there is a smaller chance of meeting someone along the way. For some reason lately I have the constant impression that if I meet nobody on my walks, it means that I never actually left the flat. That, of course, is not true, but I could easily believe it.

As I take a slight turn to the right, a woman and her German Shepherd appear, walking towards us from the opposite direction. She hesitates. The path is narrow, and for both of us to keep the required distance, someone will have to leave it. We both step aside, drifting apart from each other, but the dogs have a different plan. Skeletor wags his tail; the other dog does, too. They come close and sniffle, happy to see each other. The woman peers at me over her mask. How does she feel meeting another person? Is she even slightly glad to see me? Am I?

This situation has repeated itself a lot in the past few weeks. The dogs are always eager and approach without fear, and I start to feel as if Skeletor is walking me instead of the other way around.

I’ve never been good at keeping track of days. But since March 22, when the lockdown began in Athens, I am counting as if never before. Date and time have taken on a new urgency, as I try to calculate the right moments to leave the house.

For each outing, we are required to fill out a form or send a text message to the government. We must specify which of four activities we will engage in: an emergency visit to the doctor, grocery shopping, exercise, or walking a dog. The penalty for being a pedestrian outdoors without one of these reasons is a fine of €150. I’m choosing to fill out the form for now, but rumor has it that the government will require text messages from everyone soon.

So these days it takes me much longer than usual to prepare for a walk with Skeletor, because I’m fretting over what time to write on my piece of paper. How much time is enough to walk a dog in the morning? My usual morning walks would take an hour, and Skeletor needs them to let off some steam—but now an hour seems too much, a luxury. I try to bargain—maybe half an hour is good enough if I climb up the most remote part of the hill and make sure nobody is around. If I am late because I took too long to get ready, will I be lying to the police? 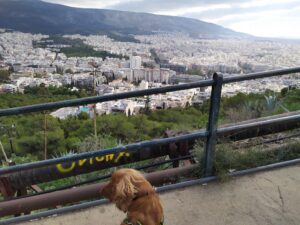 Skeletor appreciating the view from his walk. Courtesy of Eugenia Triantafyllou

Every few days, Greek social media and TV bulletins tell us there will be an extension of the lockdown. A few days ago we were doing well, but now the same measures are not enough anymore. We need to stay inside for longer. To be more specific about how much time we spend outside of the house, more frugal with our outings. “The next couple of weeks are critical,” the leading epidemiologist says.

But they said the same thing the week before, and the one before that.

People are confused. And worried.

My worries are not only about the authorities. In the mornings I wait until I hear my neighbor, an elderly woman with severely compromised health, go outside to feed the stray cats who depend upon her. I gave her some latex gloves a few days ago. Living in an apartment building makes it difficult to avoid bumping into each other in the entrance. So I listen for her usual sounds, imagining the scenario of not hearing her one day at all, and what I would do then. When I am sure she has finished her morning ritual and I hear the lobby door close, that is my signal to leave the house.

A few days ago, I read about an old woman in another city. She was seen walking her sheep downtown. Not a dog or even a cat. A sheep. A photograph showed her next to a building complex, the sheep grazing on some grass that grew on the lot right next to it. Her face was pixelated by the news media for privacy.

Had she always done this, before the quarantine? Perhaps. Nobody noticed then, or if they did it might have registered as something rural people did, something bucolic and colorful. Now, it is scandalous enough to make the news, one of many suddenly suspicious characters.

Another article describes a woman who was caught hiding one of her small children in the trunk of the car to escape being fined because only two people are allowed to ride together in a car. A man filled out a permit for personal exercise but was discovered by the police many kilometers away. A woman swimmer was forced to come out of the sea to be fined. The violations, according to social media, have reached 40,000, amounting to a total of €6,000,000 in fines, another number to count.

Contrary to how it might seem, we Greeks are not obsessing over sheep. But the irony of the imagery is not lost on me. People are afraid of being lambs, of being herded mindlessly and corralled inside their homes, an uncertain future ahead of them. But more than that, they are afraid of dying.

There are even priests who break the quarantine, insisting that the gathering of the congregation for the Divine Liturgy, including the Holy Communion itself, cannot possibly be a source of contagion.

Still, most Greeks are following the rules as best they can.

Greeks on Facebook protest that the government focuses too much on serving fines and policing instead of healthcare. One day the medical personnel were hailed as heroes; the next, police tried to break up their peaceful World Health Day protests. Gatherings of more than ten people are forbidden after the lockdown. Doctors and nurses gathered in the forecourt of Evangelismos, one of Athens’s big hospitals, protesting the shortages both in personnel and equipment that has been happening even before the coronavirus crisis. The government promises radical restructuring of healthcare in the next couple of months. There are plans for 500 mobile medical units that will test people for the virus at home.

As Orthodox Easter approached, the government also promised to enforce the lockdown with drones and raise the fine to €300 to deter people from leaving the cities. So people celebrated Easter on balconies and rooftops, where the traditional roasting of the lamb took place in pairs or alone.

On social media, we Greeks argue over every single piece of news. That’s nothing new. But somehow it feels more important, more pressing, to be right, to maintain a sense of control now in this chaos of information. Many call the opposite side “sheep,” an old expression for gullibility that feels as common nowadays as it is to roast one for Easter, if not to take one for a walk.

Contrary to how it might seem, we Greeks are not obsessing over sheep. But the irony of the imagery is not lost on me. People are afraid of being lambs, of being herded mindlessly and corralled inside their homes, an uncertain future ahead of them. But more than that, they are afraid of dying.

In our apartment, we don’t have a working stove yet—one of the perks of moving in just a couple of weeks before the coronavirus crisis reached Greece. We try to manage with cold food: sandwiches, fruit, some snacks from the grocery store. As Skeletor and I returned from our walk, we stopped by the small pizza place on the square. Exarchia—the neighborhood I was raised in and the only place I have lived in Greece—has a long history of anarchism and clashing with police forces. Here the lockdown, though necessary for public health, sometimes ends up scratching wounds that never healed. The virus has achieved what decades of police intervention haven’t: The square is empty except for a small squad of policemen, standing next to their motorcycles at the south side as a warning to unnecessary wanderers. They have not stopped me yet, although I carry my ID and papers with me at all times.

It’s almost eleven. I greet the woman behind the plexiglass and place my order. She offers hand sanitizer and tells me I am her first customer since she opened at 7 a.m. “It’s only pocket money now.” She shrugs.

There is talk on the news about a coronavirus subsidy for the private sector. I hope it reaches all the people who need it so they can endure for now. It’s important for everyone to endure as long as needed, to stay healthy and alive until it is okay for us to return to the world and take a look at it anew. Perhaps we’ll appreciate things we took for granted—a home cooked meal, brushing against strangers on the streets, having a cup of coffee in the sunlight, a long walk with a dog. It will be strange at first, resuming life after such a long pause. Maybe we’ll start the count anew: Which things remain lovingly, reassuringly, the same. Which ones broke during the pandemic and will need to be fixed. And which ones have always been broken but we refused to see it.

And I do hope in this restored world, the sheep will keep taking walks.

Editor’s Note, May 1, 2020: Since this piece was filed, Greece’s low death rate during the lockdown has prompted prime minister Kyriakos Mitsotakis to announce a time frame for easing the restrictive measures imposed last month.