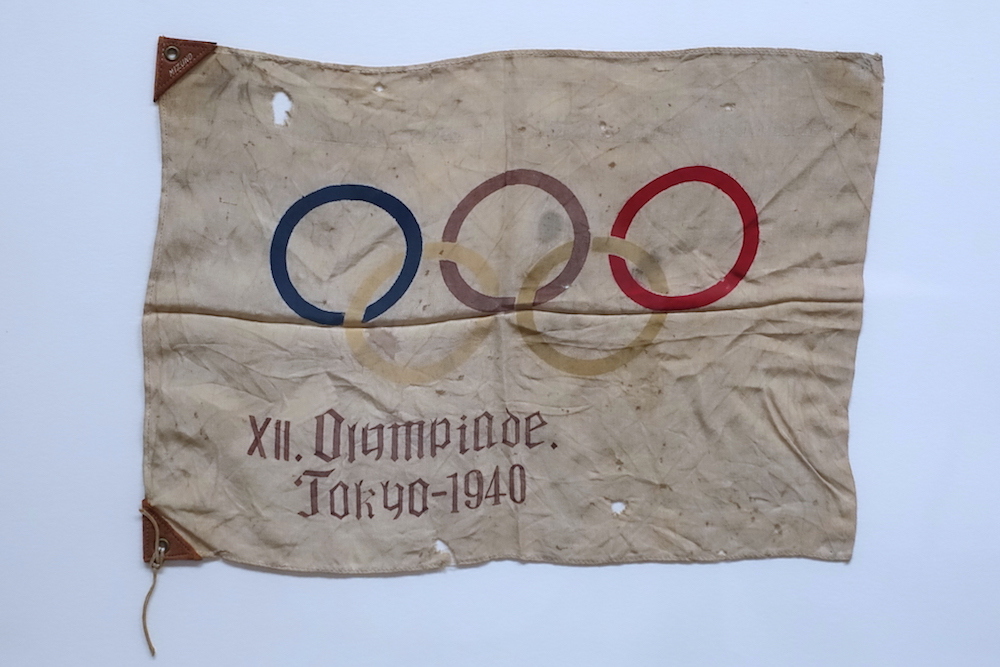 Tokyo’s 1940 Olympics never happened. The games for 2020 are on hold. Some say the event is cursed. Others point to organizers’ delusional thinking. Courtesy of Wikimedia Commons.

This spring, as the coronavirus pandemic flared across the globe, pressure mounted on Olympics organizers to cancel or postpone the Tokyo 2020 Games. At first, the International Olympic Committee, the group of 100 members that oversees the Olympics, sashayed ahead with its plans with seeming nonchalance. As late as March, IOC President Thomas Bach brayed that members hadn’t so much as uttered the words “postponement” or “cancellation.”

But pressure from athletes and national sport bodies finally forced Bach’s hand. Olympians—including big-name stars like U.S. decathlete Ashton Eaton, reigning Olympic pole vault gold medalist Katerina Stefanidi of Greece, and Canadian hockey standout Hayley Wickenheiser, who is also a member of the IOC and its Athletes’ Commission—demanded postponement. Then Canada announced a de facto boycott, vowing not to send its athletes to Tokyo, soon followed by Australia, Germany, and Portugal. With the five-ring dominoes falling, the IOC and organizers in Tokyo relented to reality on March 24, issuing a joint statement that the Games would in fact be delayed.

It was the first time in the history of the Olympics that the Games were postponed. But it was not the first time Tokyo had its Olympic experience scuppered by calamity. In 1940, too, the city had been slated to host the Summer Olympics—before misguided IOC management exacerbated external circumstances and got in the way.

It’s a pattern we’re likely to see again, because the Olympics are rooted in arrogant fantasies about the power of the Games to soar above the rules and limitations of other human enterprises. The Olympics could not transcend war in the 1940s, and it can’t transcend epidemiological science today.

The modern Olympics were the brainchild of Baron Pierre de Coubertin, a French aristocrat who believed that the rigorous discipline and outward displays of masculinity embedded in sporting culture could help reinvigorate France after its humiliating drubbing in the Franco-Prussian War. In 1894 he assembled a hodgepodge of officials from sports organizations in Europe and North America along with a gaggle of fellow aristocrats—including the King of Greece, the Prince of Wales, and a Russian grand duke—to restore the Olympics. The Games were built on a bedrock of contradictions: the Olympics were to symbolize peace but were also a way to toughen up “a flabby and cramped youth” for war, as the Baron put it. The Games were anchored in a rhetoric of inclusion even as Coubertin railed against the participation of women. The Olympic rings were to represent the continents of the world linked in peace, but the Games were organized by nation, thereby encouraging chauvinism.

The first Olympics were staged in Athens in 1896, and for years thereafter they were attached like a sporty barnacle to the more popular World’s Fair. It wasn’t until the 1912 Olympics in Stockholm that the Games finally achieved solid footing.

In 1936, the IOC picked Tokyo to host the 1940 Games, over Helsinki. It was a controversial choice. In 1931, Japan had aroused international consternation when it invaded Manchuria and installed a puppet government. The IOC’s oft-proclaimed aim of fostering peace and goodwill apparently didn’t outweigh its desire to spread across the globe—Tokyo would be the first city in Asia to host the Games. Rome had also expressed interest in hosting the 1940 Olympics, but behind the scenes, the Tokyo bid team cut a deal with Benito Mussolini: Il Duce backed their bid in exchange for a promise of Japanese support for Rome’s effort to secure the 1944 Games. In the end, IOC members chose Tokyo over Helsinki by a vote of 37 to 26.

The Olympics are rooted in arrogant fantasies about the power of the Games to soar above the rules and limitations of other human enterprises. The Olympics could not transcend war in the 1940s, and it can’t transcend epidemiological science today.

But imperial aggressors are going to aggress—and many within Japan viewed the Olympics as “an opportunity to demonstrate Japan’s growing imperial might, to stake a place on the world’s sports fields as well as its battlefields,” as sports historian David Goldblatt has noted. Japan attacked China in July 1937, setting off the Second Sino-Japanese War.

Critics from the international community—like the Japanese Peace Society and the American League for Peace and Democracy—demanded that Tokyo be forced to relinquish the Games. Athletes from France, Great Britain, and the United States threatened a boycott. But the IOC didn’t budge. It was never particularly bothered by Japanese bellicosity, and doubled down on its support for Japan by handing the 1940 Winter Games to Sapporo in June 1937, even as threats of war filled the air. The IOC averred, as it still does, that when it comes to the Olympics, politics, and sports shouldn’t mix.

The IOC also seemed smitten with Tokyo’s dedication to honoring Olympic tradition. Grandiosity and pomposity are the IOC’s id and ego—and Tokyo bidders had plans to spend 10 million Yen (more than $61 million today) to enlarge stadiums. The Tokyo Prefecture plunged an additional $100,000 into the city’s bid, no small sum at the time (it would be nearly $2 million today). Tokyo also planned to repeat the Olympic torch relay, a ritual instituted by Adolf Hitler and the Nazis at the 1936 Berlin Games.

Hitler initially derided the Olympics as “a plot against the Aryan race by Freemasons and Jews.” But De Coubertin’s rhetoric could be persuasive in Nazi circles. The Baron wrote that “the athlete in antiquity honored the gods. By doing the same today, the modern athlete honors his homeland, his race, and his flag.”

Such talk of homeland, race, and flag chimed with Hitler’s political project—and propaganda minister Josef Goebbels convinced him that the Games would bathe the swastika in the Olympic glow on the world stage. The Germans concocted the Olympic torch relay, which wound its way from Olympia, Greece to Berlin, as a way not only to magnify the Olympic spirit but also to spread the Nazi gospel. In the final days of the relay in Germany, the torch bearers were exclusively blond and blue-eyed, textbook exemplars of the supposed Aryan “master race.” De Coubertin deemed the performance “gallant and utterly successful.”

In promising to continue the tradition, the hosts in Tokyo fortified the IOC’s good favor.

Tellingly, the Japanese, not the IOC, pulled the plug. As Japan funneled more resources into the fighting in East Asia, the country’s Minister of War, General Gen Sugiyama, insisted that Tokyo withdraw its Olympic responsibility in order to focus on the war. Eventually, leaders in Tokyo issued a statement that read, “We deeply regret to have to abandon temporarily the privilege of holding the first Olympics in Asia.” They added, “We promise to make every effort to bring the 1944 Olympics to Japan as we firmly believe peace will return to the Far East before long.”

The IOC shifted the 1940 Summer Games to Helsinki, and the 1940 Winter Games to Garmisch-Partenkirchen in Germany, thus demonstrating the Olympics had no qualms about the Nazi regime. Eventually, both 1940 Games were canceled after Russia invaded Finland in 1939. The Olympics wouldn’t be held again until 1948 in London.

Much has changed in Olympics Land since the 1940s. The Games are much bigger, with the Summer Olympics now convening some 11,000 athletes. In the process, the Games have been transformed into an expensive, money-making behemoth; an exercise in trickle-up economics that typically sends public dollars from a city or country to well-connected economic and political elites that organize and broadcast the Games.

The economic stakes are higher for host cities. When Tokyo postponed in 2020, it had already plunged billions more than intended into the Olympic project. During the bid phase of the Tokyo Games, the price tag was $7.3 billion, but today, according to an audit carried out by the Japanese government, the Olympics are on pace to spend more than $26 billion. The recently announced postponement will add another $2 to $6 billion in costs, say Japanese media. And we should expect that number to climb.

Japan’s Deputy Prime Minister Taro Aso recently suggested that the Olympics were cursed every 40 years—from the 1940 Tokyo cancelation, to the boycott-plagued 1980 Moscow Games, to the Tokyo 2020 postponement. But the problem is nothing so magical: What has truly cursed the Olympic Movement is its dismal combination of outsized ambition and subpar leadership.

Just as the International Olympic Committee mismanaged wartime politics in 1940, it has mismanaged its response to the 2020 pandemic. Bach, the IOC president, claimed he was slow to act to postpone the Tokyo games because he was listening to people like President Donald Trump, who contended things would be back to normal by mid-April. That Bach would listen to Trump instead of experts from the World Health Organization and other medical bodies who refuted that rosy outlook, should be alarming to anyone who cares about athletes and the Olympics, let alone wider public health.

City officials who agree to host Olympics are already signing up for problems; questionable spending, militarization of public space in the name of security, and the displacement of existing homes or businesses to build facilities. The gamble is that the Games will somehow rise above these problems, and transform a place. The fact that these wishes rarely come true is why anti-Olympics activist groups pop up in nearly every city that contemplates hosting the Games.

These activist groups are coming together to create an international counter-Olympics movement of their own. NOlympics LA, which is leading the charge against the Los Angeles 2028 Games, worked last summer with anti-Olympics activists in Tokyo to stage the inaugural transnational anti-Olympics summit, featuring activists from Olympic host cities around the world, past, present, and future.

The way the Tokyo 2020 pandemic postponement transpired will only stoke these anti-Olympics groups. And if history is any guide, the 2021 Games—assuming they can be held in our age of coronavirus—will almost certainly provide additional grist for critiques of the Olympic movement.