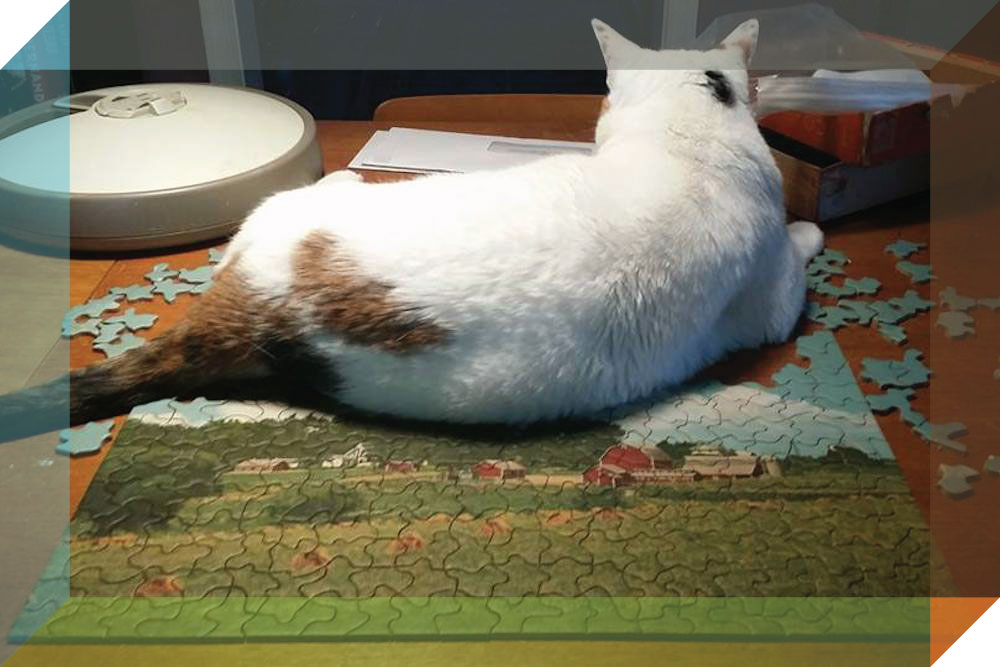 Momo "helps" with a puzzle. Courtesy of Beth Daniels.

Like most children of my generation, the first jigsaw puzzle I ever did was likely a plywood map of the United States, divided into 10 or so pieces with little plastic knobs on top. Or it could have been one of several large-pieces-for-little-hands cardboard sets of 100-odd shapes that transformed into Scooby-Doo, or Huey, Dewey, and Louie, or whatever. Perhaps it was one that came in a can—a shtick popular in the 1970s. We always had tons of jigsaw puzzles in the house, so I don’t remember the first ones; I only remember the good ones.

Whenever I have too much to think about or not enough, I pull out a jigsaw puzzle. Sorting the pieces can be both meditative and instructive: You get the lay of the land, a game plan. Put together the pile in front of you, scan for stragglers, move on to a different section, get the bulk of that done, and so on. The experience is rational, systematic, and absorbing. All the competing thoughts line up or disappear.

I come from a long line of tabletop game enthusiasts. My grandmother kept stacks of playing cards on a shelf in her kitchen, at the ready to tell fortunes or cheat at rummy. My parents, who met in college in the early 1960s, were too old to be hippies and too young to be beatniks, but literary enough to fight over the New York Times Sunday crossword. For me, though, it’s always been the jigsaw puzzle. For the last half century, jigsaw puzzles have been the most enduring, consistent habit of my life.

In 1963, the year before I was born, photographers Robert and Katie Lewin created Springbok Editions, a series of high-quality, 500-piece, circular jigsaw puzzles with groovy designs, several of which would make their way into our home. My favorite Springbok as a child, “English Legends,” came in a deep purple box, and it had a design that perplexed as much as it excited me. At the center of the circle sat St. George on a white horse, bedecked in armor and plumed helmet, spearing a fire-breathing dragon under a hot, white sun. Around the edges of the disk were the lesser legends, all apparently laboring in the dark, under a variety of moons—Robin Hood, King Canute, King Arthur asleep in a cave (while Lancelot wooed Guinevere to his right). A bunch of goblins inexplicably fighting demons filled the extra space. The latter bit of the scene seemed decidedly un-British: one goblin held a boulder aloft, ready to hurl it at two fighting demons—dragons with arrow-tipped tails. It’s a small image that raised larger questions. 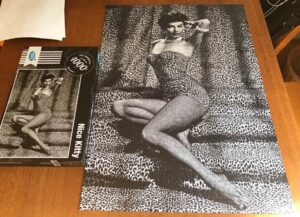 An Ava Gardner puzzle. Courtesy of the author.

Like all Springbok puzzles of the era, the pieces were glossy, thick, and solid. Each had been cut in unique shapes. I put the English Legends puzzle together so often, I had to come up with new ways to sort it. Sometimes I’d do the parts I liked least first (Robin Hood looked nothing like Errol Flynn) and work my way to the fire-breathing dragon. Or I’d do all the dark bits and leave the pictures, the easy part, for last.

Each new puzzle presented its own assembly priority; once I finished sorting, the first section just popped out to me. The more I did, the less concerned I was with consulting the model image on the box. I tend to do swaths of color first and keep the edge pieces out for the finishing touches. I do most puzzles this way: sky first, edges last.

Toward the end of every puzzle, there is a stage when it just becomes annoying to fill in the remaining bits. By the time I was a teenager, I began venturing into OCD territory. When there were maybe 30 pieces left to go, if I couldn’t place any piece I laid my hands on immediately, I would take the whole puzzle apart and start over again. That went on for about two years until the Springbok Flat Banana finally knocked some sense into me.

There’s a scene in Citizen Kane where the miserably bored second Mrs. Kane sits on the floor of Xanadu, the fictional estate of Charles Foster Kane, putting together the pieces of one massive jigsaw after another. I know we are not supposed to be jealous of the lonely, unhappy Mrs. Kane, but I admired her survival instinct: what better way to exert some measure of control in your life than to build a preferable world from thousands of the best hand-cut pieces money can buy.

The Flat Banana (not its real name) was yellow with a Dole sticker in the upper-left corner. The knobs that locked one piece to another had been cut down the middle in a good proportion of the pieces, which were cut into some seriously weird shapes. Normally, puzzles took me hours to complete, but that one took me a week’s effort. Maybe that’s why it cured me. I remember wondering to myself the entire time I worked on it whether I’d follow through on my rule to start over if I got one piece wrong. Perhaps because of how long it took me to do it, I had the time to realize it wasn’t necessary to complicate the game, and I dropped the practice.

My favorite puzzle of all time came from my grandparents’ basement rec room, aka my dream room. It had a pool table with leather web pockets, red felt, and one of those beaded strings you kept score with by thwacking it with your cue like they do in the movies. Midcentury end tables flanked two saucer chairs lit by dark wood lamps with paramecium-shaped mosaic tiles. And, of course, there were the shelves stacked with puzzles, including one from the late 1950s that lives on in my heart forever. I distinctly remember it featured an underwater tableau of sea creatures, complete with a deep-sea diver in a helmet surrounded by stingrays, a hammerhead shark, a swordfish, and possibly a giant squid. The workmanship that went into it was what got me—it had glorious triple-thick pieces with backing the color of teaberry gum.

There’s a scene in Citizen Kane where the miserably bored second Mrs. Kane sits on the floor of Xanadu, the fictional estate of Charles Foster Kane, putting together the pieces of one massive jigsaw after another. I know we are not supposed to be jealous of the lonely, unhappy Mrs. Kane, but I admired her survival instinct: what better way to exert some measure of control in your life than to build a preferable world from thousands of the best hand-cut pieces money can buy. When I worked the seascape puzzle, I knew exactly how those pieces felt in her hands.

I left Albany, New York, my hometown, at 17, and schlepped a couple of my childhood darlings from one state to another until I ran out of space or lost too many pieces. Every now and again, I’d find myself poking around garage sales on the off chance that I might replace them, but that turned out to be as likely as finding lost family photos in another person’s album. When eBay became a thing, I went searching for my favorite puzzles and have had some success over the years. I bought a new copy of English Legends that, unlike our family set, came in an uncrushed box with no missing pieces. Putting that together after 20 years made me a little misty; I still remembered which of the white-ish pieces belonged in the cave and which were part of the dappled light on the dumb Robin Hood section by shape. Take that, encroaching memory loss! 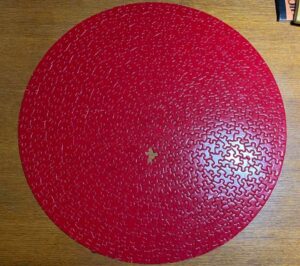 A round, red puzzle. Courtesy of the author.

I’ve since acquired other Springbok round puzzles of that era, including the maddening “Red Riding Hood’s Hood,” which, as you might expect, is completely red. That one is missing one piece. ONE. I also got the Flat Banana again, but being less compulsive in my old age, waited a good time before getting around to it. This time, it took weeks to solve.

While searching for that undersea critters jigsaw of my grandparents’ house (which I have yet to find), I became a fan of the Tuco non-interlocking puzzles that were popular in the 1930s and ’40s. An offshoot of a company that made wallboard for home construction, Tuco made jigsaw puzzles out of unused board when the industry tanked during the Depression. Turns out that a 300-piece “Tripl-Thick” (Tuco’s trademark) non-interlocking puzzle is just as hard to do as a 500-piece modern one. They slide all over the place, especially if your cat likes to help by sitting on them. My favorite acquisition of this sort is of a very white family at church—the picture of Protestant devotion. The man is clean shaven with close-cropped hair, his hand upon the shoulder of his 4- or 5-year-old, rosy-cheeked son. His wife has a blonde poodle cut under a smart hat, and both she and little Sally (probably) are wearing gloves. I freaking love that puzzle.

If one of my first jigsaw encounters was that plywood map of the U.S., today I intentionally seek out geography-focused puzzles. They can depict ancient or modern locations, but must be of real places; anywhere on the actual—not Middle—Earth will do. I have a terrible sense of direction, but can identify all the countries of Central Europe, which helps my self-esteem. I do not care for modern “folksy” puzzles, of the kittens-tangled-in-yarn variety, but I would definitely hate-solve one if stuck in a cast at a ski lodge, were it my only option. Foodscapes also horrify me: no one needs to see a pepperoni pizza in that level of detail. I like a fine art puzzle every now and then to delve deep into an artist’s brush strokes and use of color. There are companies that make jigsaws for you from uploaded high-res images of your own design. I sent in a photo of Ava Gardner in a leopard-print bathing suit posed on leopard-print drapery and got 1,000 pieces of joy in return.

These days, my diet has expanded to include the “Jig-of-the-Week,” another Depression-Era specialty that comes in a cheap, 10-inch square box with no picture to work from, only an unhelpful title, like “Greensleeves” or “Pickett’s Charge”, printed on the side to suggest the final result. The pieces, which are not interlocking, run thin and teensy and are eminently losable, but there’s still a pleasure to be found among their shapes: they can sometimes surprise as cars or bottles or hats. I have stacks of these.

When I was little, I did puzzles for privacy, to quiet my head, to finish something. I suppose that’s why I still do them. But there’s no longer the same urgency to the act. Nor do the puzzles require the amount of concentration they once did. Instead, these days I do them purely for fun, to lazily organize my thoughts, to do something with my hands while listening to a podcast or book. But I’ll rarely do one with other people. They start with the edges. Amateurs.