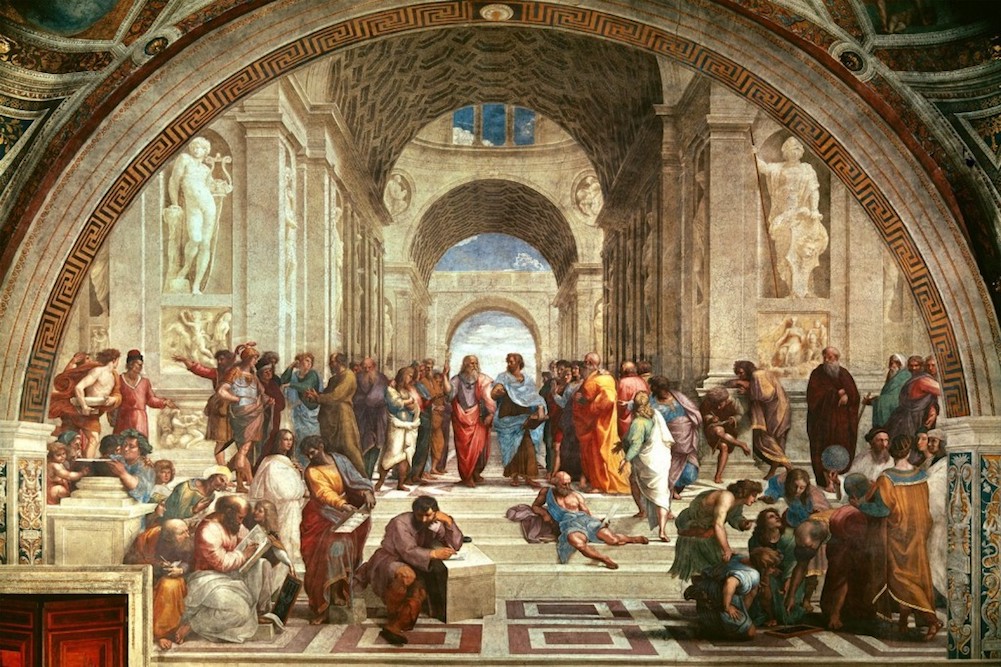 Plato and his pupil Aristotle are prominently featured in the Italian Renaissance artist Raphael’s famous fresco “The School of Athens.” Courtesy of Wikimedia Commons.

As technologically advanced as the fight between Twitter and Trump now seems, this dilemma is not new at all. The world’s very first democracies—in ancient Greece—had their own difficult debates about truth, knowledge, and democracy. If the ancient philosophers were alive today they would say this is no mere scuffle over Tweets, but a moment that asks us to make a fundamental choice about whether we want to live in a society that values the truth. The Athenians’ approach to this question shows why allowing propaganda and disinformation to stand, unquestioned and untested, could unravel democracy itself.

Long before “Fake News,” the Greeks had a lively set of ideas about truth. The philosopher Socrates argued that absolute Truth (Sophia) is knowable and that we communicate best when we communicate only that Truth. His student, Plato, went further, saying that one can arrive at the Truth through the method of dialectic—which meant a process of questioning and testing. Taken together, Socrates and Plato proposed that wisdom isn’t based purely on possessing the “truth,” but—rather ironically—on being aware of one’s own ignorance of it.

While we remember Plato as a great philosopher of democratic Athens, in fact he wasn’t fond of democracy because he thought that not everyone could access Truth through dialectic. He also didn’t care for skilled oratory—rhetoric—for a related reason: he worried that people without knowledge of the Truth would use manipulation and “base rhetoric” to persuade audiences who couldn’t tell the difference.

For these reasons, Plato was especially skeptical of the teachers of rhetoric known as the Sophists, who included Greek rhetoricians like Gorgias—self-proclaimed “wise men” who charged fees to educate the aristocracy about morality and speechmaking. From Plato’s perspective, Sophists used clever rhetorical tricks that won them clients but did not advance the Truth. Plato thought that the Sophists were people who didn’t know the Truth themselves but who, nevertheless, made a living educating others, who also didn’t know.

Plato’s criticism had some truth in it, but, in a larger sense, he was being unfair.

Sophists, despite their weaknesses, proved to be necessary players in creating a functioning democracy. Why? Because most political decisions couldn’t be resolved with Plato’s dialectic. The Truth wasn’t already out there, or easy to find. So Sophists taught the skill necessary for the practice of democracy—how to reach consensus about the truth. They taught people how to create arguments, to persuade audiences to believe their side, and to solve thorny political problems.

Of course, viewed from the perspective of absolute Truth, Phronesis looked shady. When you hear people today use “sophistry” as a synonym for making a disingenuous or misleading argument, you’re hearing Plato talking to us through the ages.

So are modern-day propaganda and disinformation merely sophistry? Not quite. Our democracy actually embraces, and even values, modern sophists. By the standards of the ancient Greeks, today’s professors and lawyers—the two professions that we, the authors of this essay, represent—would be considered more like Sophists than like Philosophers. Professors offer their own interpretations of evidence in their scholarly disciplines. Lawyers employ their skills of logic and oratory to make the most compelling argument they can on behalf of their clients. (And like the Sophists, both make money for their efforts.)

To defend ourselves against any Plato super-fans out there, we must point out that lawyers and professors also place an equal emphasis on finding the truth. In university classrooms, students question their instructors and are encouraged to challenge them with their own arguments. (Law professors actually teach by the Socratic method!) In courtrooms, witnesses are cross-examined, and juries—who are chosen because they are a tabula rasa (a blank slate)—are expected to arrive at a “truth” which is understood to lie somewhere between the competing sides.

America embodies a version of democracy embraced by Aristotle, which combines the best of Plato and the Sophists. Aristotle explained that rhetoric (Phronesis) is the counterpart of dialectic (Sophia). Both methods of truth-seeking are necessary to solve political problems and arrive at the truth.

In short, the goal of propaganda isn’t persuasion, but rather compliance—it doesn’t employ either Sophia or Phronesis. That is why it is the favored form of communication for authoritarians. It simply demands that we believe, rejecting all other claims to the truth. It’s like asserting the existence of absolute truth, but without using the method of dialectic to reach it, and instead claiming some secret method of truth-finding. The charge that something is “fake news”—without evidence or justification—is itself the ultimate demand to, in the words of George Orwell’s 1984, “reject the evidence of your eyes and ears.”

The implicit demand for obedience contained in deliberately false information is what is most destructive to democracy. When we share a commitment to finding the truth and agree about the method for discovering it, we are setting important democratic ground rules. Not only do these shared values and belief in the process help us arrive at collaborative solutions, but they also give us a bond that sustains our society when our governments reach decisions or make policies that we might disagree with.

So when Twitter tries to insert facts into Trump’s tweets, it is using a very old and democratic method that goes back to the ancient Greeks. It reminds us that we have a responsibility to ourselves and to our fellow citizens to search for, and debate, the truth. It encourages us to be loyal to our shared values and higher principles, not to a person or party.

But when decision-making is based on “choosing sides,” rather than on reasoned argument and discovering truth, these ground rules are eviscerated. Research shows that beliefs premised on loyalty—to, say, a person, or to a partisan affiliation—are especially impervious to facts that question or disprove them. Without a shared factual reality as a starting point, the Aristotelian ideal of debating ideas and achieving consensus on our common issues becomes impossible.

When propagandists, be they presidents or anyone else, reject any attempt to provide facts in the face of lies, they are rejecting the pillars of truth-finding upon which a democratic society is based: curiosity and debate. Accusations—rather than argument—and compliance—rather than persuasion—are incompatible with a democratic dialogue. The ancient Greeks rejected unquestioned propaganda and disinformation as well outside of democratic norms. So should we.