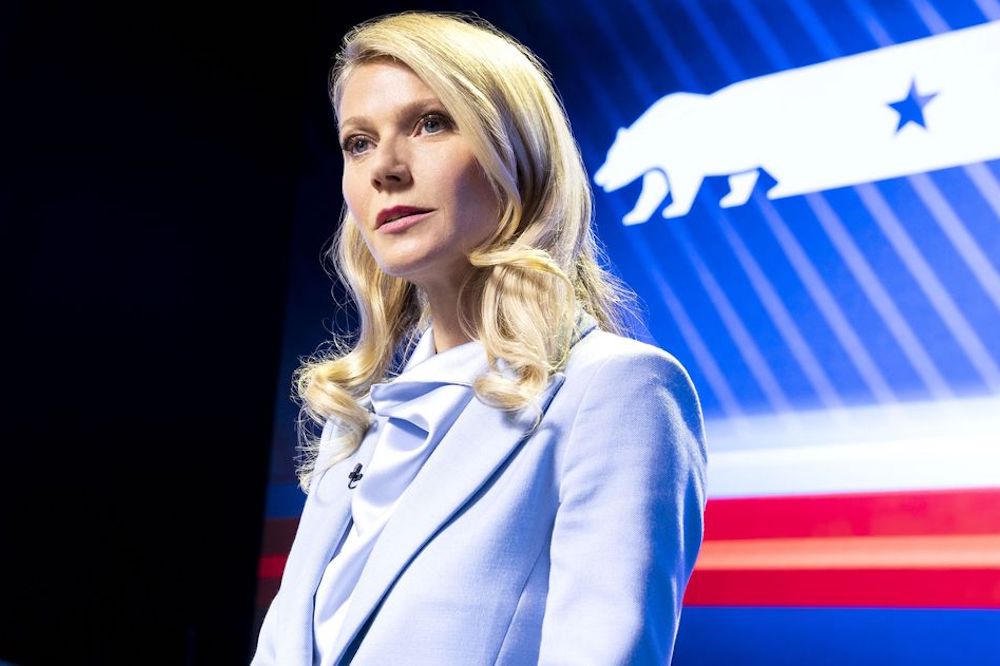 Gwyneth Paltrow plays Georgina Hobart, whose gubernatorial campaign in California pushes for #CalExit in The Politician. Courtesy of Netflix.

“Go to my website or use the hashtag #LetsGetTheCalOuttaHere,” shouts Gwyneth Paltrow in the Netflix series The Politician. Running for governor on a promise to lead California’s secession from the United States, Paltrow’s character wins with 98 percent of the vote.

The scenario may be fictional, but the idea of California independence, once dismissed as a joke, is gaining both cultural currency and real-world urgency. Our own real-life governor, Gavin Newsom, frequently describes California as a “nation-state,” to make the point that the Golden State must act like an independent country to protect itself during the biggest pandemic in a century. In the absence of reliable federal assistance, California’s local and state officials, along with businesses, have scrambled to provide the protective equipment, testing, ventilators, and guidance that were once thought to be the responsibility of federal agencies.

While conventional wisdom remains that California would never leave the union, who can put faith in conventional wisdom anymore? Polling has showed for three years that one-third of Californians support their state’s peaceful withdrawal from the nation. And Californians’ anger at the federal government is high, with relentless and nasty fights between the state and the White House over California’s attempts to protect its immigrants, women, health care, water, housing, environment, and elections.

Those fights can be partisan, but the differences between California and the U.S. run deeper than mere party lines. And they aren’t temporary. Even the election of a Democratic president is unlikely to bring state and nation together. The cause of the rift between Californians and America goes well beyond the political to the structural, the cultural, and the constitutional.

California is a future-oriented modern democracy with a powerful initiative process that allows its highly diverse population (60-plus percent identifying as non-white) to make laws and amend its constitution directly. The U.S., on the other hand, is a majority-white country that clings to a 1789 constitution that famously permitted slavery, is nearly impossible to amend, and prohibits election of the president by popular vote.

While California’s system encourages a constant give-and-take between citizens and leaders, the power of the U.S. presidency is vast and largely unaccountable; one person in the Oval Office could start an apocalyptic nuclear war without permission from voters or other branches of government.

Those other branches are also sheltered from democratic interventions. Too much power lies with a U.S. Senate that makes a mockery of equal representation, with California’s 40 million people receiving the same two senators as Vermont’s 625,000. And the most difficult decisions in America are made by an unaccountable Supreme Court of highly politicized, life-tenured judges.

None of this makes California’s departure from the union likely. But it does guarantee that our state will be in constant conflict with the U.S.—and that there will be repeated attempts by California to escape the union, for at least as long as the current American Constitution remains in place.

So what is the best way to pursue and manage California’s efforts at independence in the years ahead?

The essential answer to that question is: peacefully. And to make independence peaceful, Californians must hew to the principle that any Calexit must win the support of majorities in both California and the United States as a whole.

California should convene scholars and representatives from as many states as possible to draft a new American Constitution. Such a body would look at constitutions all over the world with the goal of creating the most advanced 21st-century governing system possible.

Right now is an auspicious time for just such a reconsideration. With protestors toppling statues of the Founders and institutions pledging to end systemic racism in the U.S., the place to start is by reconsidering America’s original system—the Constitution.

This suggestion will make some Americans crazy, because people in this country have come to deify their Constitution. Americans also assume—after hearing such rhetoric for all our lives—that the end of our current Constitution would mean the end of freedom and democracy.

But that’s not true: Ending one republic does not mean the end of a nation. It means starting a new republic. The French are on their fifth republic. Switzerland, a multicultural and multilingual state that has remained stable and peaceful for 500 years, routinely remakes its constitution, most recently in 1999.

California, the nation’s most creative and populous state, is the perfect place to remake the American republic.

A California-led constitutional rewrite would fit our history. While other states went through a process of becoming a territory and then negotiating statehood with Washington, California hurriedly convened an unauthorized convention in 1849 and declared itself a state, leaving the U.S. no choice but to ratify the self-admission in 1850.

In that spirit, California should convene scholars and representatives from as many states as possible to draft a new American Constitution. Such a body would look at constitutions all over the world with the goal of creating the most advanced 21st-century governing system possible.

A new constitution also could provide for truly national elections, and could include modern devices like national referenda for major decisions (like going to war) and proportional representation to end our polarizing, winner-take-all political culture. The two-house Congress, a breeding ground for corruption, could be replaced with a single parliament. The power of the American executive could be limited, and distributed to more than one person, to prevent one deranged president from blowing up the world. A new constitution could commit the country to environmental protection and make the passing of international treaties easier, to allow America to fight full-force against climate change.

Once that new constitution is drafted—and the draft is translated into all of the world’s languages, so anyone can read it—California voters would decide whether to approve it. If they turn it down, the convention would have to keep revising it until it gets something that meets voter approval.

Once approved in California, the proposed constitution would be sent to the other 49 states, asking them to adopt it. This is an idea grounded in our current national constitution’s Article V, which permits the calling of a convention to amend or even redo the Constitution by the approval of 34 states. Alexander Hamilton, in Federalist No. 85, wrote that Article V was included because we might need to change the Founders’ system; they couldn’t have confidence it would always be the best one.

The other states could accept our constitutional proposal. Or they could amend it, in consultation with California. In either event, California would have helped give the United States a 21st-century governing document that, presumably, would be more democratic, and more supportive of equal rights and environmental protection. Free of the old Constitution, the United States could stop endlessly measuring today’s policies against centuries-old legal precedents, and would have more time to plan for the future.

In that scenario, the Golden State would stay in a more perfect union. But it’s also possible that other states would reject the document, and even the entire exercise. That would leave California with the choice of whether to stay and suffer within the U.S., or to negotiate a peaceful exit from the union.

The nation of California would face some of the same challenges the state of California has struggled to manage—water, education, infrastructure, and taxation. But it also would give the world an alternative American nation with governing rules that aren’t compromised by the sins of the 18th century. Perhaps we could finally conquer our rampant gun violence. Or perhaps California could limit its military and adopt a policy of neutrality, thus demonstrating that Americans actually can organize a nation that doesn’t pursue constant warfare.

The good news: If California sought independence, it wouldn’t have to draft a new constitution. It could simply use the constitution it drafted for the U.S. as the governing document of the new Golden Nation.

In this scenario, California could walk away in good conscience, having done everything it could to save America from itself.