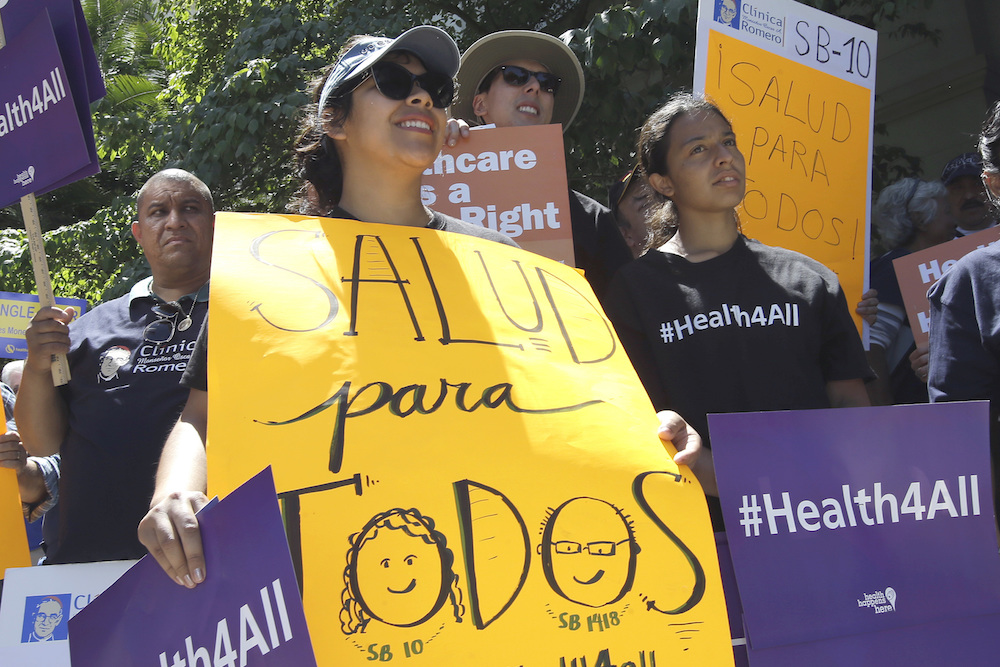 A 2016 rally marking when California expanded Medi-Cal to all low-income children 18 and under, regardless of immigration status. Courtesy of Associated Press.

Welcome, Californians, to the era of Medi-Cal for All.

“Medicare for All,” the political dream of extending federal health program for the elderly and disabled to all Americans, still gets the headlines. But here in the nation’s most populous state, it is Medicaid—or Medi-Cal, as the federal health program for the poor is called in California—that comes closest to providing a universal safety net. Medi-Cal deserves more attention now because its no-or-low-cost health services provide a vital backstop in this time of pandemic and freefalling employment, and because it holds possibilities that have yet to be realized.

Medi-Cal spending, which comes mostly from federal funds, has grown rapidly over the past decade. And this past week, even as the governor and legislature agreed on a state budget with plenty of cuts, Medi-Cal kept on growing. Overall spending on Medi-Cal is budgeted for a 12 percent increase in 2020-21, to more than $110 billion. This increase covers surging enrollment—the governor’s office has estimated an additional 2 million people will join Medi-Cal this year after losing jobs or insurance.

Medi-Cal now is the most important anti-poverty program in a state with persistently high poverty rates. An estimated 14.5 million Californians—more than one-third of us—will be on Medi-Cal by summer’s end, double the number in 2010. Medi-Cal has been woven into the fabric of our lives, from infancy to near-death. Roughly half of California children are on Medi-Cal. So are some two-thirds of our nursing home residents. And if the current economic collapse becomes a long-term depression, millions more Californians will end up depending on Medi-Cal for our healthcare, too.

The triumph belongs to the Affordable Care Act, also known as Obamacare. Before that law passed in 2010, Medicaid, originally an after-thought in the 1965 federal law that established Medicare, covered only certain categories of poor adults—like parents with children, or people with certain conditions. But Obamacare funds states to open Medicaid eligibility to virtually all low-income adults under 138 percent of the poverty line—about $17,600 for an individual, or $36,000 for a family of four. No state embraced Obamacare’s Medicaid expansion more fiercely than California, which even covered income-eligible children and young adults (up to age 26) who had been excluded from the federal program due to their immigration status.

This expansion, combined with the establishment of exchanges for purchasing insurance, got results: the percentage of uninsured Californians dropped from 18 percent to 7 percent over the last decade. The impact of this shift is visible in poorer places like the San Joaquin Valley, where Medi-Cal expansion, and the money it brought into healthcare, produced a surge of new clinics and health facilities. (Staffing such places, however, remains a challenge.)

But that expansion caused trouble—the program struggled to keep up with the needs of all the new enrollees. While millions now may be protected from financial ruin if they get sick because Medi-Cal is paying the bills, Medi-Cal does not guarantee them high-quality healthcare.

The obstacles lie in the way care is disbursed. In California, more than 80 percent of people on Medi-Cal are enrolled in managed care organizations, which are paid by the state to provide enrollees with care. And managed care is not performing as well as it should. A 2019 report on Medi-Cal managed care plans found that the quality of their care declined or stayed flat on most measures between 2009 and 2018, according to the California Health Care Foundation. The same study showed declines in two-thirds of measures involving healthcare for children.

Improving quality is difficult because Medi-Cal mirrors the complexity of the state. Though Medi-Cal is a federal program overseen by the state, the managed care plans operate at the county level. Depending upon the county they live in, Californians on Medi-Cal are offered different plans from different entities. Some counties have just one publicly managed plan; other counties have the “two-plan” model, with a public and a commercial option; and other counties, notably San Diego, offer multiple commercial choices.

So if you’re on Medi-Cal, your experience varies depending on your plan and where you live. You’re more likely to get the care you need in Yolo County, which has just one plan, the well-regarded Partnership Health Plan, than next door in Sacramento County, which has a confusing array of commercial plans. Health plan management can differ widely within regions. In Southern California, Orange County’s CalOptima is still associated with scandals in the past decade. But Inland Empire Health Plan, serving Riverside and San Bernardino counties, is considered a model.

These Medi-Cal challenges represent an opportunity. Before the pandemic hit, 2020 looked like the year the state was going to improve the program. Health advocates were pushing to raise the state’s standards for the Medi-Cal managed care plans, so that they would have to show continuous improvement in the health outcomes of their customers. Children’s advocates were working to make Medi-Cal better for kids.

And earlier this year, the governor was pursuing a highly ambitious set of proposals called CalAIM (for California Advancing and Innovating Medi-Cal). The proposals involved using Medi-Cal more broadly to help the most vulnerable Californians—particularly people who are homeless and those caught up in the justice system—with their most difficult challenges, from mental health to housing. At the same time, CalAIM proposed to simplify the complex Medi-Cal program, with the goal of producing better health outcomes for more people.

But now, with the state’s health bureaucracy consumed by COVID, CalAIM is on hold. So is a proposed expansion of Medi-Cal to cover senior citizens who are undocumented.

In this pullback you can see the shadow of political reality: Medi-Cal, as part of a federal program, remains vulnerable to the national partisan struggle over healthcare. Congressional Republicans still seek cuts in Medicaid, and the Trump administration remains committed to overturning Obamacare through legal challenges and regulatory changes. What’s more, if Congress doesn’t produce more aid for California, it could force future cuts in payments to Medi-Cal providers.

Nevertheless, the program seems poised to keep growing because the need is so great. Payments to managed care plans should be tied to measures of access, quality of care, and patient outcomes. And California must train more and better healthcare workers if quality is going to improve. Medi-Cal is such a big part of California healthcare that improvements to the program could benefit the whole system.

Starting today, Californians—especially those of you who get health insurance from your employers—should demand that the state do better by Medi-Cal. Because the way the world is going, you’ll need Medi-Cal before you know it.