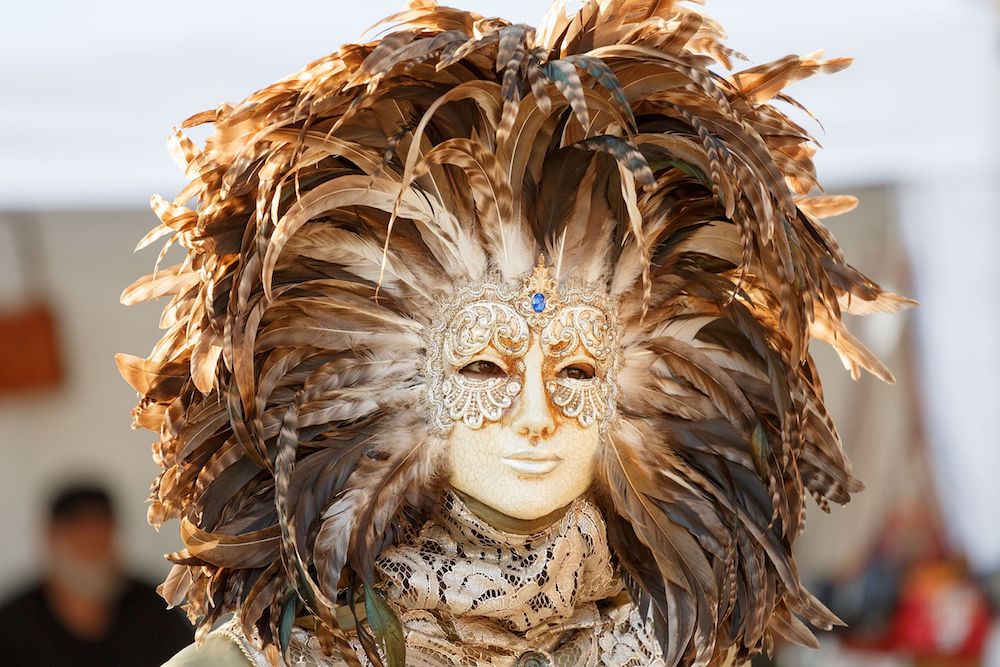 The glories of the masquerade, as demonstrated by a participant at the Venetian Fair in Ludwigsburg, Germany. Courtesy of Wikimedia Commons.

Agoston Haraszthy didn’t hesitate to wear masks. A Hungarian immigrant, he became San Diego’s first sheriff by portraying himself as a military colonel. Then, he sold himself as a metallurgist to win the post of assayer of San Francisco’s first U.S. Mint office (where he was later accused of embezzlement). And he was billed as royalty—Count Haraszthy—when he bought Sonoma grape-growing land, established the Buena Vista Winery, and made himself a historic figure in California viticulture.

But by 1864, things were falling apart for “the Count.” The Civil War and mounting debts strained his wine business. He also planted the vines too close together, and his attempt to create a sparkling “California champagne” had, literally, fizzled, with all the bottles sent to the still to be turned into brandy. To stay afloat, he was selling off pieces of the estate.

Despite all these troubles, in October of that year, County Haraszthy hosted a lavish Masquerade Ball, touted by the winery as the first in California history. All the costumes, and some novel steam-powered wine equipment, drew enough of a crowd that the event would endure. It was held most recently in 2019.

I tell this story now in hopes that today’s Californians, so wary of face coverings, might consider what “the Count” knew: Masks are about fun and finding light in darkness. What better time to put on a mask than when your whole world is falling down around you?

The glories of the masquerade are completely missed by today California’s scolds, who seek to shame us into wearing masks. We’re told, with considerable scientific justification, that we must wear masks to be good, to protect ourselves and our fellow citizens, to comply with the public health wisdom of our regime as we seek to end the pandemic.

But the true virtue of masks is that they allow us to be bad.

Instead of framing face-coverings as solemn obligation, might the public health be better protected, and might we lighten our psychic load, if we reimagined this moment as a lavish, statewide masquerade?

Behind masks, we can’t be easily shamed. We can try on new identities and deviate from the norms of good citizenship. In this cultural moment, when we are surrounded by so much coerced and performative goodness, might more people want to wear masks if we emphasized their darker and more subversive appeal? Instead of framing face-coverings as solemn obligation, might the public health be better protected, and might we lighten our psychic load, if we reimagined this moment as a lavish, statewide masquerade?

The current, highly polarized debate over masks is much too dumb and dull when you consider the history of our use of masks. Our modern conception of masking owes a debt to the Celtic festivals that were the forerunners of Halloween, where costumes and masks warded off ghosts, as well as the Republic of Venice, where a mask-wearing culture endured for centuries, and became emblematic of Carnevale.

The Venetian devotion to masks was rooted in desire—both for hedonism and for equality. With identities shielded, people could do as they wished. Without faces, all had voices. Neither government nor the Church could tell who the sinner was—and so, eventually, the authorities tried to ban mask-wearing.

In the 18th century, the Venetian passion for masquerades spread to England and eventually America. Of course, in this Puritan country, mask-wearing produced backlashes, with moralists claiming that masquerades were a foreign and immoral influence. By the second half of the 19th century and through the 1960s, major California municipalities from Los Angeles to San Francisco had laws that barred public disguise and cross-dressing. In recent years, legal scholars have described those discriminatory ordinances as forerunners of today’s so-called “bathroom bills” that target transgender people.

In our era, fortunately, the transgressive act of masking has won the cultural war—and Freddy Krueger has the box office receipts to prove it. Masquerade in California, from costume superstores to Comic-Con, is big business.

And masquerades have become fixtures on the calendar. In Los Angeles, the Labyrinth Masquerade Ball, first held in 1997 and inspired by Jim Henson’s 1986 film Labyrinth, has grown into an institution, with thousands of attendees and an ongoing story line with newly invented characters and mythologies. Host Shawn Strider told me the masquerades are great levelers in status-conscious L.A., because regular Angelenos and A-list stars alike are able to attend comfortably, without learning each other’s true identities.

The appeal of masks in an age such as ours isn’t hard to see. When everyone wants you to pick a side, the masquerade offers glorious ambiguity. In a moment when human identities are often reduced to politics or race or gender, masks can help anyone defeat attempts to confine them. And when digital surveillance sees all, masks provide the protection of anonymity, and the promise that, in disguise, we might still get to be our true selves.

For all these reasons, it makes little sense to turn masks into a symbol of compliance in the pandemic. It’d be wiser to use COVID to celebrate masks and their many advantages. Instead of fines and enforcement, let government strike teams give out cash and prizes for the most beautiful, funny, or inventive masks that they see on the streets. If people must gather, let them hold small, outdoor, socially distanced masquerades. Let’s have public kiosks, perhaps outside the grocery stores and food banks where people are waiting in lines, to help more Californians make their own masks.

In other words, let’s find ways to savor a difficult time as best we can—like Count Haraszthy did. Just two years after his 1864 masquerade, he was fired from his own wine company for “extravagance and unfaithfulness.” He declared bankruptcy and moved to Nicaragua, where he tried to open a sugar plantation.

But one day in July 1869, he disappeared, forever, into a river full of reptiles, leaving behind a lasting lesson. Wear all the masks you can—because you never know when the alligators will swallow you whole.