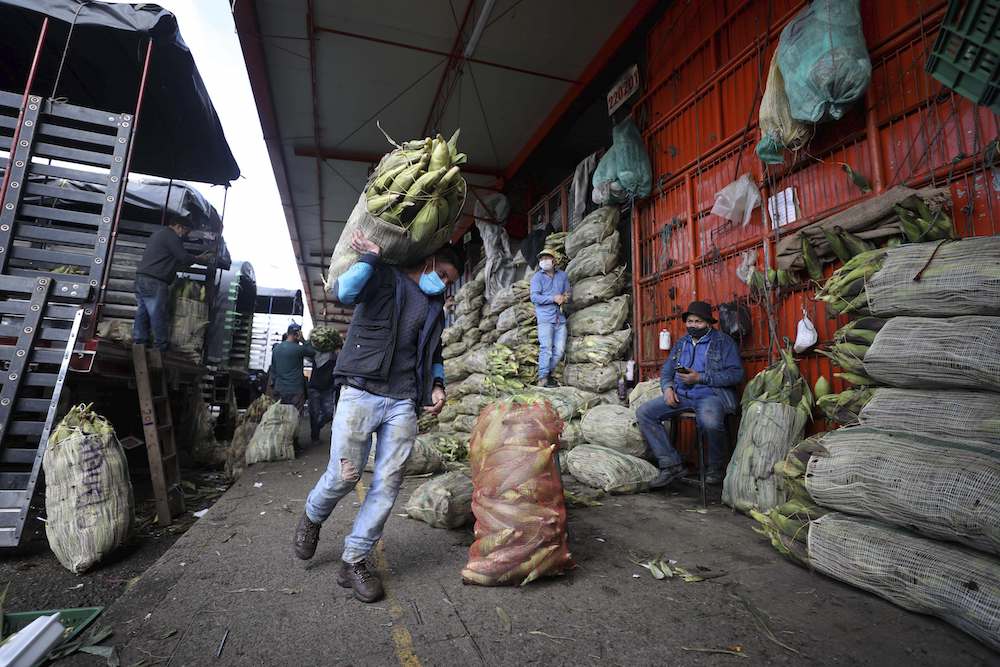 At the Corabastos market, one of Latin America's largest food distribution centers in Bogotá, Colombia. Courtesy of Fernando Vergara/Associated Press.

Earlier in the spring, while riding my bike and delivering fruit around Bogotá, Colombia, I passed by dozens of customers lined up patiently, resignedly, outside a bank on a main avenue. All wore masks, and all left at least a meter distance between each other, in obedience to the police officers standing watch nearby.

But there was something unusual about the group: all were women.

Bogotá and other Colombian cities have long imposed a traffic policy called “Pico y Placa,” which prohibits each vehicle from using the streets every other day as a way to reduce congestion. (Your days off depend on your license plate number). In April, as the coronavirus approached, the government, after banning travel and events, imposed a variation on the Pico y Placa policy to keep more people home: Males were only allowed to leave home on odd-numbered days, and females on even-numbered ones.

Despite the draconian—and, some might say, arbitrary—gender rule, few protested (although many grumbled). The only organizations to criticize the curfew publicly were transgender rights advocates, who don’t want the police—whom they accuse of many abuses—deciding who is a man and who a woman.

Of course, in the best Colombian style, the rule was enforced with flexibility. Some businesses, such as banks and large supermarkets, conformed and allowed only a single gender each day, probably because of the police watching from the sidewalk outside. But smaller businesses, needful of pesos during harsh economic times, didn’t seem to care. I purchased bread and fruit, and made photocopies on the first women-only day. And dozens of cops who saw me riding my bike on the street just ignored me, although the fact that I was pulling a cargo trailer loaded with fruit probably helped, since messengers of all genders are permitted to work.

Even so, when I arrived in the morning at the market from which I have been doing deliveries of fruits and vegetables, a guard would not let me enter without a special permit. It was the same at Bogotá’s central wholesale market, where burly men called cargadores usually arrive at dawn to unload 100-kilogram sacks of fruit and vegetables. The first morning of Pico y Placa, guards initially kept out the cargadores, until common sense prevailed and they returned to work.

I have lived in Colombia for 15 years. The first several years, I did freelance journalism. But, as the amount of work shriveled with the troubles of the print media industry, I was able to turn my lifelong love for bicycling into a business by founding Bogotá Bike Tours. We were fortunate that Colombian tourism was then just taking off, and doing tours and renting bikes turned out to be a fun way to make a living—until the coronavirus slammed the brakes on us. With travel banned and the borders sealed, our industry evaporated.

But Maikal, one of our guides, and his girlfriend Sara, saw a new need: to feed the millions of Bogotanos confined to their homes. So, they founded a business delivering fruits and veggies from one of Bogotá’s main markets.

Several times each week, we push shopping carts through the market and collect donations of ripe fruit and vegetables which the vendors would otherwise throw away. Often, we get hundreds of kilograms of moldy and damaged produce, which we load onto our cargo bikes and give away to foundations or to hungry households who tie red rags to their windows to signal their desperation.

This was work that few would envy. You pedal across this sprawling city of 9 million people pulling a child trailer loaded with sacks of produce, in sun, rain and hail, under broiling sun, and sometimes up the hills lining Bogotá’s eastern border, and while gasping for oxygen at 2,650 meters above sea level. And all for about $2 per delivery.

But I didn’t mind the discomforts, which I saw as challenges. And pedaling all day was a great relief after years of staying up half the night preparing invoices, answering e-mails and resolving problems with bike tours. Now, all I had to do was pedal, and the complications became someone else’s headaches. Plus, with the city shut down, this was the best time ever for urban cycling: The vacant streets belonged to us, and pollution was at a record low.

When deliveries took me to cramped efficiency apartments belonging to young couples who probably signed their leases expecting to only eat and sleep there, but were now spending months shut in doors, I gave a prayer of thanks for my freedom, even with all its troubles.

We messengers didn’t worry much about getting infected, even though I’ve since seen delivery people described as “front-line heroes.” For many, the work was a necessity in a time of crisis. A young woman known as “La Flaca,” who joined us in delivering fruit, did it to support herself and her young child. Another fruit deliverer, named Luisca, supported his ex-wife and his aged mother. I was paying for rent and services both at home and for the shop, where our nearly 100 bicycles continue to gather dust. 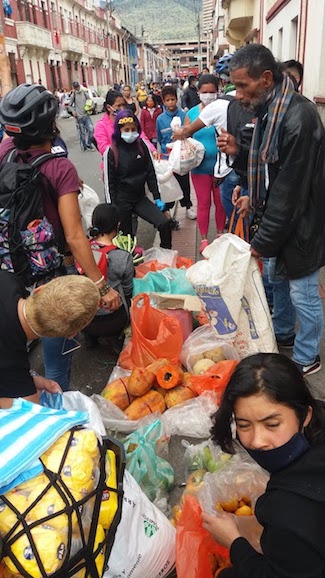 The streets have gotten harder to ride in recent weeks. Even as the pandemic has worsened here, Bogotá has returned toward its chaotic normalcy. The city’s deadly air pollution, which had taken a holiday during the lockdown, returned with the smog-belching trucks and buses. Main streets now teem with pedestrians and vendors as people struggle to find a way to survive and keep themselves sane.

“Can you imagine what it’s like being shut up all day in a tiny room?” Gabriela, an older woman and street vendor, asked me.

Truth be told, the pandemic has hit Bogotá relatively lightly, with only about 500 deaths in a city the size of New York, despite much higher levels of poverty and a weaker hospital system. However, rather than any government policies, I suspect that Bogotanos can thank their high elevation, which seems to reduce infection rates. The epidemic has hit so lightly, in fact, that I’ve noticed an expanding belief that the virus doesn’t really exist and that the epidemic is a hoax—perhaps to facilitate corruption.

No wonder official efforts to quarantine the public aren’t working. One afternoon, a police officer stopped me while I rode my bike through a crowded market area. The officer stopped about half-a-dozen cyclists, but meanwhile dozens more pedaled past us, and crowds of hundreds of shoppers milled about.

“Your I.D. cards,” he demanded. “And your permits to be out on the street during curfew! And proof that you own those bikes!”

I looked at the hundreds of shoppers milling about us and wondered what reality our city leaders were inhabiting.

None of us detainees had all the documents. Finally, bowing to reality, the officer let us all go, and looked for more cyclists to stop to justify his salary.

For me, the most difficult part of the delivery work is neither being victimized by senseless laws, nor straining up hills pulling an overloaded trailer, nor getting misled by confusing addresses. Instead, I am plagued by a new sensation of vulnerability, because I’m a foreigner.

Colombia sealed its borders in March. So, by April, all foreigners still in Colombia had been here far too long to constitute a danger of spreading the virus. Nevertheless, many Colombians treated all foreigners as threats. When groups of tourists stranded in Bogotá tried to visit Paloquemao, the central fruit market, they were either stopped at the entrance or followed around by guards once inside. I often had to argue to get in, and then argue again when guards tried to kick me out. I explained over and over that the danger came not from foreigners, but from anybody who had recently returned from overseas.

As the lockdown lengthened and hunger increased, Bogotá’s low death toll has made many here wonder whether the cure is worse than the disease. Several times each week, we push shopping carts through the market and collect donations of ripe fruit and vegetables which the vendors would otherwise throw away. Often, we get hundreds of kilograms of moldy and damaged produce, which we load onto our cargo bikes and give away to foundations or to hungry households who tie red rags to their windows to signal their desperation.

Despite our work and government food distribution, the need is overwhelming. When the food ran out in one neighborhood, ironically named “La Favorita,” those still in line started yelling and seemed on the verge of rioting. Those of us doing the delivery left in a hurry, promising to return soon. But with so much need elsewhere, we never have.

Even so, Bogotanos are relatively fortunate. In lower-elevation parts of the country, the pandemic appears to be accelerating. Neighboring Brazil, whose right-wing president keeps denying the epidemic’s reality, has become a global epicenter of the epidemic. To Colombia’s east, Venezuela’s economy and health system have long been in free fall under the impacts of corruption, U.S. sanctions, and collapsing oil prices. Now, its authoritarian government is unwilling or unable to report the number of COVID-19 cases there. Meanwhile, millions of Venezuelan refugees have fled back and forth across Colombia, potentially carrying the epidemic with them.

I am trying to imagine what the future here looks like. We’ve transformed our bike shop into a neighborhood market. Unfortunately for us, however, several of our neighbors had the same idea, and the barrio is now saturated with markets. At the same time, the neighborhood, which depended on tourists and university students, shrinks in population.

In the meantime, I expect to do even more deliveries—at least until a vaccine arrives.