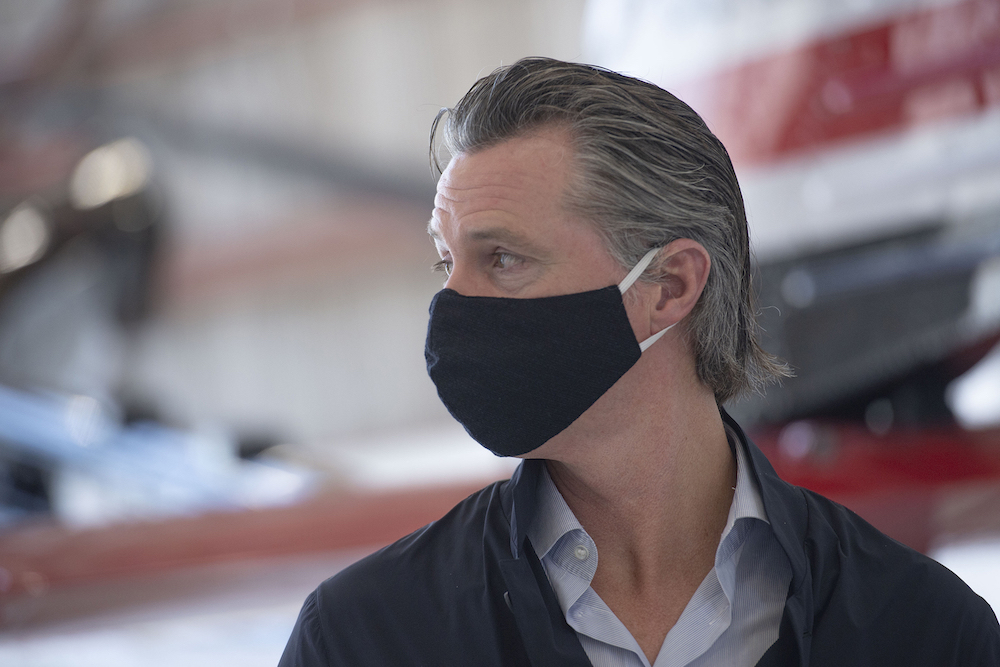 At a particularly polarized time, columnist Joe Mathews makes the case that a scientist, not a politician needs to be the face of COVID-19 briefings. Courtesy of Hector Amezcua/Associated Press.

No California governor has ever had such a regular, closely observed platform, and you are making the most of it. Your memory, your command of policy and operational detail, and your rambling verbal dexterity, especially with the long words you favor (do you ever stop to breathe?), are almost superhuman. With these briefings, you are giving California’s most preeminent polysyllabic performance since Julie Andrews sang “Supercalifragilisticexpialidocious” for Disney’s Mary Poppins.

Your skilled delivery of so much epidemiological data and so many changing regulations has put you at the center of Californians’ daily lives as we struggle through the pandemic and its associated social disruptions and economic earthquakes.

Which is precisely why you need to stop giving these briefings.

I can hear you and your aides guffawing at my above attestation, but I’m not kidding. You are simply too good at this sort of communication for the state’s own good.

The problem is—to borrow two big words you love—fundamental and foundational. You are a politician, an elected official, with deep experience and strong, well-known views. For the most part, that’s great. While many Californians (including this columnist) have criticized your rapidly changing guidance, I feel lucky that a person of your knowledge and judgment is our governor in this moment.

But we also are an overly politicized and badly polarized society in the midst of a pandemic. It’s literally a matter of life and death that people listen to and follow your complicated public health instructions—on mask-wearing, social-distancing, and the opening and closing of businesses.

Governor, be the rare leader who learns. Be brave enough to step back from the airtime in service of the public good.

When a politician, no matter how skilled and public-spirited, is the one giving that information, the public health response is by definition politicized. The fact is that while many Californians voted for you, many others don’t trust you. And so we are seeing the wearing of masks and the safety of public-facing institutions become a political issue. Two weeks ago, in northern San Diego County, I found myself in a park with more than 150 people watching a softball tournament, and not one person was wearing a mask or socially distancing. When I asked people why they weren’t protecting themselves, many mentioned you, and none in a good way.

It’s obvious that you understand the dangers of politicizing the briefings. I appreciate how careful you are to avoid partisan statements, and to halt your righteous criticism of the Trump administration during the pandemic (even though your reticence angers some of your core supporters). I also appreciate that you treat Californians as adults, that you rigorously avoid oversimplifying things, and that you explain the larger context of state and local governance in the Golden State.

I especially admire your habit of offering caveats to so many of your assertions, and of pointing out the weaknesses in your own policies. It’s a sign of integrity—perhaps even a miracle—that none of the political consultants you’ve employed over the last 25 years has beaten that politically problematic habit out of you.

Of all the politicians who have taken the microphone in this moment, you are among the most responsible. But you can’t change who and what you are. So you need to change the briefings.

Across the country and around the globe, myriad reports and leading public health experts have concluded that, in situations like this, scientists and doctors—not politicians—should be the ones leading public briefings. The good news is that our state has no shortage of such experts.

I suggest you elevate one or both of the esteemed state health officials who sometimes appear with you on “Newsom at Noon.” Dr. Sonia Angell, the director of the California Department of Public Health, who worked at the CDC back when it was functional, is a warm and straightforward communicator. Dr. Mark Ghaly, the California health and human services secretary, has the reassuringly goofy-nerdy mien of a teacher in an ’80s movie comedy. Neither will be able to talk with the facility or breadth you can about all facets of the crisis. But they are better messengers than you are right now.

There will be other advantages. With Angell and Ghaly handling the briefings, you’ll have more time to work on stubborn problems—like opening the schools and fixing the failing unemployment system. Angell and Ghaly also speak with a simpler vocabulary and structure than you do. Some of your sentences—with their endless asides, moral persuasions, and wonk speak—remind me of the sentences that my seventh grade English teacher made me diagram as punishment for being a wise-ass.

Of course, nerds and Hegelians across the state will mourn that you are no longer on TV saying things like: “I recognize the dichotomy and to an extent, the dialectic.”

Governor, be the rare leader who learns. Be brave enough to step back from the airtime in service of the public good.

If you cancel yourself as the star of “Newsom at Noon,” you will be losing a platform. But you will be meeting the moment.