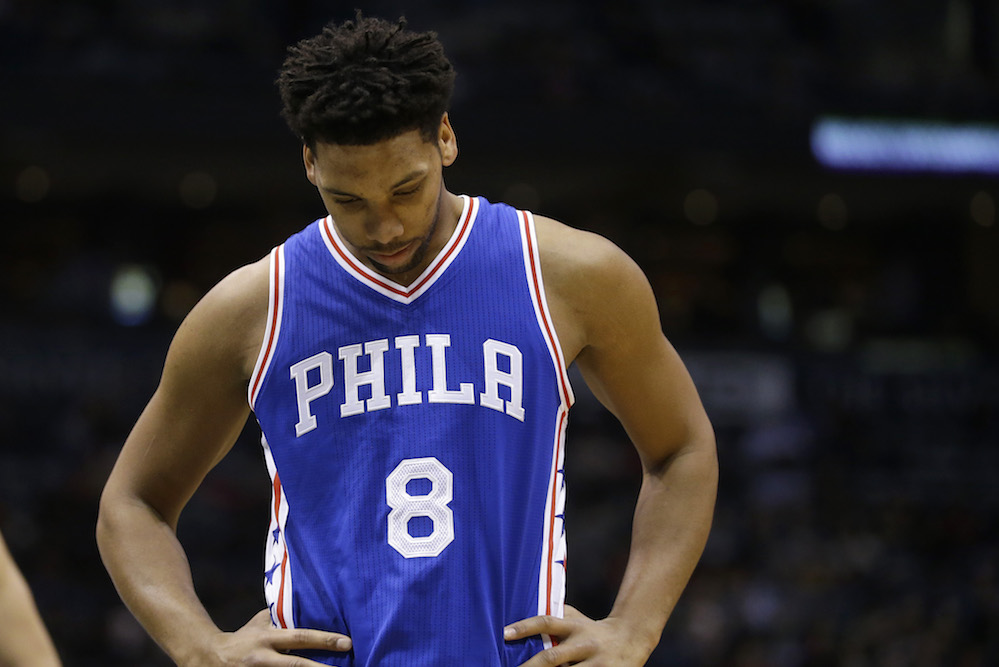 Phiadelphia 76ers' Jahlil Okafor during an NBA basketball game against the Milwaukee Bucks on January 16, 2017. Courtesy of Aaron Gash/Associated Press.

Last February, while in Boston for MIT’s Sloan Sports Analytics Conference, I found myself sitting at a bar table alongside Sam Hinkie, the former general manager of the NBA’s Philadelphia 76ers. This was an exciting moment for me.

I’d spent the previous year working on a book about the Sixers that focused on Hinkie and his polarizing team-building strategy, which involved assembling a losing squad in the short term to get big wins in the future. Hinkie’s data-driven devotion to tanking had given Philadelphia a shot at greatness, and raised all sorts of interesting questions about team building in professional sports.

But the strategy—known as “the Process”—had taken a toll on the team, including Hinkie himself. We’d spoken a couple times on the phone, but we’d never met. He had declined, on multiple occasions, to be interviewed for my book. “I don’t have any interest or willingness to quote-unquote shape a legacy,” he told me in an early phone call.

Hinkie was hired by the Sixers in May 2013. He was just 36 years old and, unlike the majority of his peers, his on-court career had ended after high school. But he had an MBA from Stanford, and experience in management and private equity. He thought and spoke like a finance guy, so it wasn’t a coincidence that the private equity billionaires who had purchased the Sixers in 2011 took a liking to him. He represented a fresh hope.

The Sixers had once been home to NBA greats like Wilt Chamberlain, Julius “Dr. J” Erving, Charles Barkley and Allen Iverson. But the franchise had spent much of the decade before Hinkie’s arrival trapped in NBA purgatory. They were not good enough to compete for a championship but not bad enough to scoop up the high draft picks which the league, in an effort to promote parity, hands to its worst performing teams. The Sixers were mired in mediocrity on the court, and it was hurting their bottom line. They ranked in the league’s bottom-third of attendance in 2009, 2010, and 2011, despite playing in the country’s fifth-largest metro area.

Hinkie saw a way out: He’d build a team to lose. He wasn’t the first to employ such a strategy, but, as one NBA general manager told me, “he went further than anyone else.” To Hinkie, the math was simple. He knew that five teams had combined to win 20 of the previous 23 NBA titles, and that these teams had monopolized the titles because they each had multiple stars on their rosters—Michael Jordan and Scottie Pippen of the Chicago Bulls, Kobe Bryant and Shaquille O’Neal of the Lakers, Dwyane Wade and LeBron James of the Miami Heat. He also knew that, typically, star players spent the majority of their careers playing for the teams that had originally drafted them and that these types of players were typically selected early in the draft.

Few leaders in the history of sports have ever so willingly and aggressively sacrificed the present in order to chase a better future. Less than two months into the job Hinkie traded his team’s best player, All-Star point guard Jrue Holiday, for a pair of draft picks. A year later, Hinkie dealt Michael Carter-Williams, the reigning Rookie of the Year, for yet another future pick. He also used the Sixers’ two first round picks on a pair of players who wouldn’t suit up for two more seasons: a University of Kansas center named Joel Embiid, who had recently suffered a fractured foot; and a Croatian forward named Dario Saric, whose deal with a Turkish team would keep him overseas for at least two more seasons.

People aren’t widgets. They’re complicated and irrational and emotional. They have egos. They have pasts. They’re unpredictable. They can surprise. They can disappoint. Not only is treating them like assets amoral; it’s also bad business.

Hinkie didn’t stop there. Veterans were shipped out. Salary cap space was left unused, infuriating the players’ union. Hinkie never instructed his coaches to lose games; given the roster he handed them, he hardly needed to. Two years into Hinkie’s tenure, the Sixers had amassed a war chest of draft picks unlike anything the league had ever seen.

But this zero-sum, McKinsey-like approach blinded Hinkie to the subtler aspects of the job. The Process triggered all sorts of anger, from all sorts of parties. Some fans viewed Hinkie as a scam artist running a dirty game of three-card monte, a man in violation of professional sports’ Golden Rule: You play to win the game. NBA commissioner Adam Silver was furious that one of the league’s 30 teams was so willing to damage the NBA brand. Sixers business executives and opposing owners were irked about being forced to sell a subpar product to fans.

“It’s not complicated,” Milwaukee Bucks co-owner Marc Lasry told me. “No one likes coming to see a horrible team.”

Hinkie’s biggest misstep, though, might have been writing off the complexities of his players. He left the vital work of relationship-building and player development to others. He rarely attended team practices, believing it was important to build a wall between himself and the coaching staff since they had conflicting priorities (Hinkie didn’t want to win games, and the coaches did). A culture of accountability was never created. Embiid, whose 13-year-old brother was tragically killed during his rookie year, would blow off rehab sessions and ignore medical advice. Another young draft pick, Nerlens Noel, who had grown up in an environment surrounded by adults trying to leverage his talents into their own rewards, would often show up late for practices and team flights.

Then there was Jahlil Okafor, a player out of Duke University who Hinkie selected for the Sixers using the third pick in the 2015 draft. Okafor was a prized prospect. He was massive—nearly 6-foot-11 and about 275 pounds—with huge hands, deft feet, a soft touch, and a full arsenal of post moves. But he had internal demons that he’d yet to confront.

One day, when he was 9 years old, Okafor was sitting in his living room watching BET when his mother started coughing. Okafor laughed. He thought she was joking. She gasped for air. Okafor laughed again. His mother kept wheezing, each breath more labored and painful than the one before. Finally, Okafor realized something was wrong, but his call to 911 was too late. One of his mother’s lungs had collapsed, and she died in the hospital that night.

Okafor was crushed. “Even now,” he would tell a reporter while in high school, “I still have to think, ‘What if I could have known right off the bat that she wasn’t playing? She would still be here.’” But it wasn’t until he entered the NBA that his emotions manifested themselves in dangerous ways. During his rookie year, he began frequenting bars. One night a stranger in a parked car pulled a gun on him; another evening, someone filmed Okafor stumbling around streets, cursing out onlookers. TMZ aired the footage the next day.

The story embarrassed the league and served as the final straw for Sixers ownership, who soon brought in Jerry Colangelo, a longtime basketball executive, to work above Hinkie and right the ship. The Sixers offered Hinkie the opportunity to stay on as an executive. He declined—and then surprised his bosses by submitting an elaborate 13-page resignation letter, with subsections paying homage to famous investors like Charlie Munger that cemented his reputation as both an eccentric and an ideologue. “What Sam did, the principles he showed, the loyalty to those principles, it takes a really special person,” one of his friends from within the NBA once told me.

And yet, despite the missteps, the Process basically worked. The Sixers, now nearly seven years since Hinkie’s hiring, find themselves near the top of the NBA. All those losses and high draft picks netted two young superstars, the aforementioned Embiid and Ben Simmons, and the team has become a playoff mainstay. This season, before the COVID-19 NBA shutdown, the Sixers led the league in attendance. Forbes recently valued the franchise at $2 billion, about four times its purchase price in 2011.

To many, Hinkie’s unwavering pursuit of efficiency is something worthy of both praise and emulation, the kind of thing that gets held up in classrooms and boardrooms as an ideal. These days, Hinkie spends his time in Silicon Valley, teaching at Stanford and raising millions of dollars for his venture capital firm.

But there’s one more lesson to take from the Process, one that Hinkie’s acolytes often miss.

Hunting and exploiting market inefficiencies may be sound business, no matter what field, and especially in a cutthroat multi-billion-dollar world like the NBA. And the Sixers, thanks to Hinkie’s work, are no doubt positioned better than they were before.

But when you stop looking at things in black and white—asking simplistically, Are we better than we were before?—and instead consider the full-color range of reactions the approach triggered, the truth that Hinkie’s calculations all missed reveals itself: People aren’t widgets. They’re complicated and irrational and emotional. They have egos. They have pasts. They’re unpredictable. They can surprise. They can disappoint. Not only is treating them like assets amoral; it’s also bad business.

That Hinkie inherited a middling team and turned it into a contender will always be part of his legacy. So will the fact that his mishandling of people led to his tenure, and the Process, being cut short.