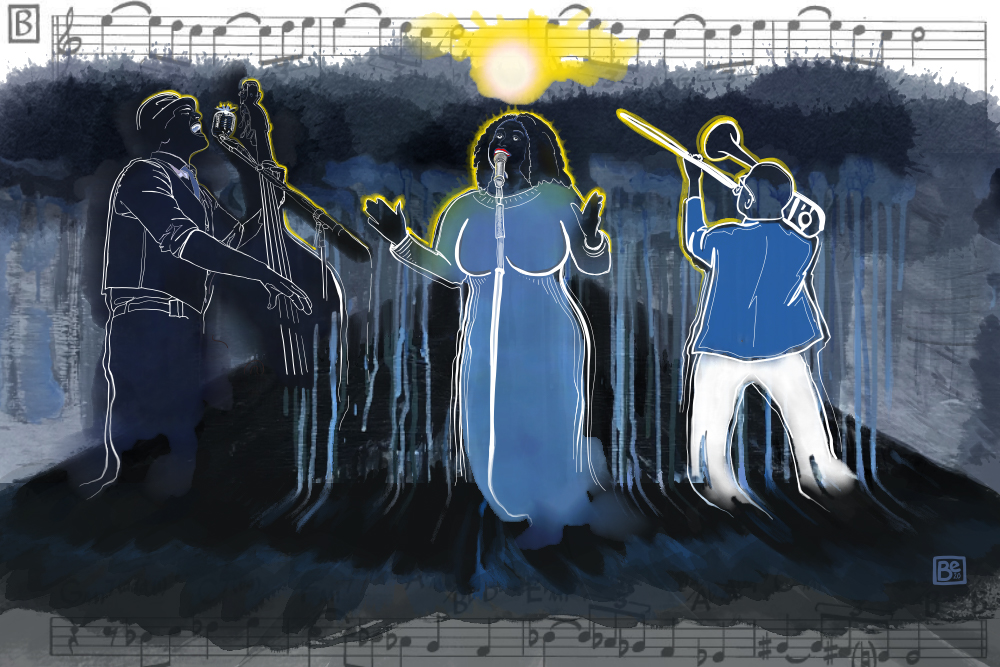 Three days after the September 11 terrorist attacks I left my Brooklyn home, tracing backward the trail that thick billows of smoke had blown across the East River, to hear saxophonist Charles Lloyd at the Blue Note, in Greenwich Village. Two weeks earlier, I had interviewed Lloyd on a park bench in the shadow of the Twin Towers. He described his compositions as “tenderness sutras” and his performances as rituals offered in the face of complacency and conflict. Sitting in that club, those towers now gone, I listened closely. I heard the sutras, partook in the ritual. I felt less scared. Tenderness seemed at hand.

In 2006, six months after the levee failures following Hurricane Katrina, I was at Donna’s, a now-defunct club on the northern fringe of the French Quarter. Shannon Powell sat at his drum kit, welcoming trumpeters and trombonists, singers and saxophonists to the stage for one traditional tune after another. Most of these musicians had driven in from evacuation centers or temporary homes in, say, Atlanta or Houston. They simply had to play together. And we needed to hear them, to clap on two and four. Weeks later, I was among the hundreds following the Hot 8 Brass Band past carcasses of former homes during a second-line parade, a tradition at least a century old, derived from jazz funeral processions. It felt like—it was—both a necessary group embrace and a protest march declaring a right to return. In desolate streets, moving together in rhythm, I grasped their feeling of fullness and sense of purpose.

Throughout my career as a culture reporter and jazz critic, disorienting moments of crisis have been clarified—even answered—through rituals of live improvised music, shared in real time, in physical spaces either buzzing with energy or near-sacred for their calm. Those experiences and the music itself have answered urgent needs, calmed frayed nerves, voiced outrage, summoned spirits, and leaned into hope.

Until now. In March, as the COVID-19 lockdown came with sudden severity, musicians scrambled home from wherever they were and then watched calendars go blank. Gigs gone. Tours canceled. Clubs and concert halls closed. This was true everywhere, all at once. This new reality was especially stark in New York City and New Orleans, the two focal points of my work and life. Both cities have storied jazz histories and vital contemporary cultures staked to improvised music. And both were early epicenters of the pandemic. The absence of brass bands on New Orleans streets and the shuttering of jazz clubs in both places meant the sudden denial of something communal and necessary, especially in times of disorientation and grief. How do we find tenderness, relief, and meaning now? Flutist and composer Nicole Mitchell told me that what she misses most are group rehearsals: “Being in the process of making new music together, because that’s where you build new worlds.”

Meanwhile, our existing world paused. Late April did not bring the annual New Orleans Jazz & Heritage Festival, which, shortly after Katrina and long before the city rebuilt, felt like a big soul-generating battery. “If, for two weekends, people could plug in,” Jazz Fest producer Quint Davis had told me, “it’ll mean something.” And it did. Back then, New Orleans was enduring what David Winkler-Schmidt of the local Gambit Weekly called “the horrible unending of not knowing.” In an essay this April, bassist Christian McBride, who hosts NPR’s “Jazz Night in America,” likened Mother Nature to an orchestra conductor and the pandemic to a fermata in our collective score, “a pause of unspecified length on a rest or note.”

In New York, musicians and fans need no clearer reminder of the arrested state of affairs than the red double doors on Seventh Avenue South leading to the Village Vanguard, New York’s oldest continuously operating jazz club, which have been locked since March 16. “I thought we’d be dark for a month, and that seemed like forever,” said Deborah Gordon, who started working at the Vanguard in 1989 and took over running the club full time after her mother, Lorraine, died in 2018. “But look where we are now.” The place hasn’t been entirely empty. Jed Eisenman, who began washing dishes in the club in 1981 and now directs its weekly bookings, has stopped by four or five times a week. “Mostly I come to convene,” he said. “I don’t want the spirits in the place to be forsaken. The place still crackles with energy.” Ask any jazz musician: These spirits are inseparable from the living culture.

Like many other venues, the Vanguard now livestreams performances from its stage. That’s a welcome development, not least because it employs musicians. The first such performance, from drummer Billy Hart’s quartet, looked and sounded like a stylish documentary that gets the music. Still, it couldn’t capture the feeling Lorraine Gordon once described to me, “when the club is full, when the people seem happy and they’re at one with the artist, when everybody’s face is absolutely glued to the stage. It’s like a painting but it’s real life, every night.”

The last live performance I heard was by drummer Tyshawn Sorey’s band, at Manhattan’s Jazz Gallery in early March. McCoy Tyner, a pianist as spiritually minded as he was influential, had died the day before. After two hours of original music, Sorey’s group slid gently into Tyner’s “Search for Peace.” It was wordless release of grief I hadn’t known I needed, one last bit of communal uplift before lockdown.

Tenderness and truth-telling are more necessary than ever. So are musical traditions that embody these ideals, and that roll acts of creation and of memorializing into unified gestures of defiance and hope.

In the ensuing weeks, the coronavirus pandemic began claiming the lives of noteworthy jazz musicians: trumpeter Wallace Roney, saxophonist Lee Konitz, and bassists Henry Grimes and Andy Gonzalez. Among the dead in New Orleans are Ronald Lewis, a beloved figure of Sunday second-line parades who founded a Lower Ninth Ward museum dedicated to Crescent City traditions, and Leona “Chine” Grandison, whose Candlelight Lounge in the Tremé neighborhood has nurtured New Orleans jazz for more than 35 years. The death of pianist, educator, and jazz patriarch Ellis Marsalis, on April 1, hit me hard. Sitting on the front-porch swing of his Uptown New Orleans home, Marsalis had described his music and his city to me as inseparable, joined by “values we can share.”

The day after his father’s death, trumpeter Wynton Marsalis led 16 musicians through the first installment of “Memorial For Us All,” a digital Lincoln Center series meant as “a secular community remembrance.” The concert was virtual, stitched together from individual videos. Still, moving from the dirge “Flee As a Bird” to an up-tempo version of “Didn’t He Ramble,” the group stayed faithful to the jazz funeral tradition: a defining element of New Orleans culture that transforms mourners into celebrants through music, simulating the moment a body is cut loose, its spirit set free.

This was both cathartic and a stark reminder that these rituals can’t happen now as they should. For clarinetist Michael White, who played in Marsalis’s online memorial, and who has by his own estimation has played some 200 jazz funerals spanning nearly a half-century in his hometown, “It feels unnatural not to properly release and send off members of our musical community. What happens to all these souls? And to ours?”

I’ll never forget watching two horses—one black, one white—amble down a New Orleans street in the early morning mist, pulling a carriage carrying the late trumpeter and brass band-leader Ernest “Doc” Paulin as his former employees (including White), clad in white shirts, ties, and black five-pointed hats, played a dirge. Or, for that matter, the line of New York pianists in 2010 who played solo, one by one, at the Abyssinian Baptist Church in celebration of one of their own, Hank Jones. In such communities, the passing of a musician is a significant moment. You stop. You show up. Ritual is important.

In Jason Berry’s book City of a Million Dreams, a sweeping, 300-year history of New Orleans, jazz funerals form “caravans of memory” that hold a mirror to the society. “As black people danced in the sunrise of jazz,” Berry wrote, “the official city gazed backward, seeking salvation in a sanitized Confederate past.”

New Orleans removed four Confederate monuments in 2017. Yet the fact and legacy of structural racism stands sturdy there and throughout this country. As the cruel pain of the coronavirus pandemic converges with the pain of cruel murders that have led so many into the streets to declare that Black lives matter, tenderness and truth-telling are more necessary than ever. So are musical traditions that embody these ideals, and that roll acts of creation and of memorializing into unified gestures of defiance and hope.

Sometimes galvanizing ideas animate the music itself and, like acts of protest, benefit from repetition. On a 2011 album, trumpeter Ambrose Akinmusire devoted one track to reciting details of the shooting of 22-year-old Oscar Grant III by a transit officer in Oakland, over a drum solo. On “Rollcall for Those Absent,” from a later release, a child recited the names of those killed in similar circumstances: Amadou Diallo, Trayvon Martin, and others.

In January, when Akinmusire recorded “Hooded procession (read the names outloud)” for his most recent album, before his ambitious tour was canceled due to the pandemic, George Floyd was still alive. “I was trying to express my exhaustion,” Akinmusire told me. “I’ve been doing this for nearly 10 years. In asking listeners to read the names out loud, I’m telling them, ‘It’s your turn here. Maybe this will be more effective.’” Forsaking his trumpet, playing glistening chords on a Fender Rhodes piano, taking his time as if in a church processional, he moves nearly imperceptibly from minor key to major, finding fleeting resolution.

Yet sometimes, only taking to the streets will do. One sunny Sunday afternoon in June in Manhattan’s Union Square, pianist Jon Batiste spoke through a mask and a megaphone about the need to “implement systemic change and avoid collective apathy.” Then, along with members of the Stay Human band he directs on The Late Show with Stephen Colbert and dozens of other musicians, he led roughly a thousand people up Sixth Avenue. He passed just blocks from the Village Vanguard, where he’d recorded two albums, and drew on the second-line parade tradition he learned as a boy. He played and sang “Lift Every Voice and Sing,” composed more than a century ago and often referred to as the “Black National Anthem.” Following that, “We Are,” an original song released as a single in June, featuring the St. Augustine High School Marching 100 band, of which he was once a member. The song is a call-to-arms, Batiste told me, “meant to confront the choice between profit and humanity, and between freedom and the bondage of racism and all the terrible things that have been accepted and perpetuated in this country.”

This is a pent-up, fast-changing time with promise for transformative change. It’s also a frozen moment, still mostly locked down. Across “social distance,” even virtually, the rituals of improvised jazz carry resonant and newly urgent meaning. Yet someday—soon, I hope—musicians will step back on stages before audiences, all of us less than six feet apart. Brass bands will lead second-line parades, crowded and messy and moving as one. I want to be in that number.