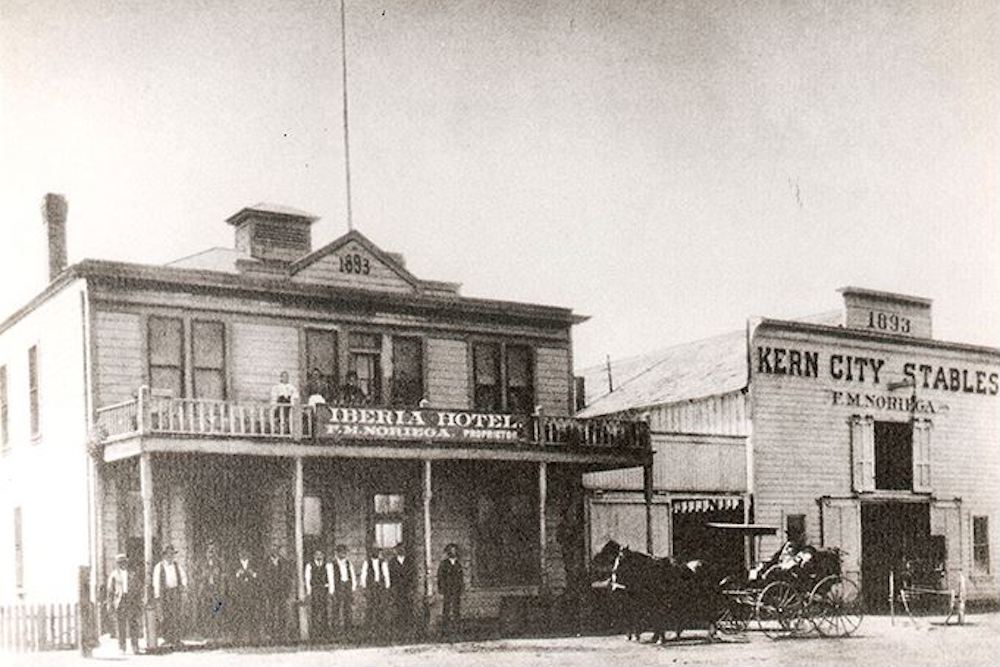 Earlier this year the economic near-standstill caused by COVID-19 forced Bakersfield’s Noriega Hotel to announce that it would close its doors.

It looked like a sad end for one of the most beloved Basque-American restaurants in California—and offered a reminder of a great tale of recovery and renewal.

The Noriega is one of many Basque restaurants in the American West that started out as boarding houses for Basque immigrant sheepherders but grew into institutions that performed many social and economic roles in American communities.

The boarding house business has a long history in Southern California and the southern San Joaquin Valley. A large number of Basque immigrants arrived in the American West in the second half of the 19th century, many of them having been lured to work in the open-range sheep industry.

These migrants gravitated toward Bakersfield and the small town of Tehachapi, where two business concerns—the Miller & Lux Ranch and the Kern County Land Company—had recruited Basques as ranch laborers. Between the 1870s and 1900s, so many Basque immigrants arrived that they turned Kern City, which was renamed East Bakersfield in 1900, into a Basque enclave.

Basque boarding houses, in Kern City and elsewhere, quickly became the main institution of Basque immigrant life in the United States. Many late 19th century Basque immigrants worked in the lower ranks of the sheep industry; some saved money from sheep work and used the capital to construct and operate boarding houses. The establishments provided more than just a place to sleep. Basque newcomers could receive a wide range of assistance in these hotels, including employment-related services, medical care, and monetary support.

The Noriega Hotel in Bakersfield was a case in point. The boarding house was originally established by Faustino Mier Noriega, a Spanish immigrant from Cantabria, who in 1882 had begun working as a herder for one of Miller & Lux’s sheep ranches, and later was promoted to foreman. Noriega wasn’t Basque himself, but he befriended many Basque people during his ranching work. He became even more closely associated with the Basque community in Kern City in 1893, when he married Louise Inda, an immigrant from the Basque Country. Later that year, he formed a partnership with Fernando Etcheverry, a Basque immigrant from Aldudes, and opened the Iberia Hotel. Five years later, it was renamed the Noriega.

At boarding-houses, you’d find sheep laborers, ranchers, Forest Service employees, government officials, dealers, bankers, and railroadmen, all talking together. Meals were often served to dozens of men and women, all seated at one long table.

Sometimes, Basque boarding houses were owned by a family. Sometimes, two partners invested capital and then managed the hotels themselves. The Noriega Hotel followed both models, starting out as an investor-backed enterprise but then converting into a family business in 1931, when Jean and Grace Elizalde purchased it, seeking regular and stable earnings to help them through the Great Depression. The family ran it for nearly nine decades until its closure in April. (In June, a new buyer, a local restauranteur, said he would purchase the name and try to reopen the restaurant at a new location).

Basque hotel keepers sought profit, but they also made a practice of helping newly arrived Basque immigrants make the transition to American life. Typically, these boarding houses were located close to a local train depot, making arrival easier for the disoriented and non-English-speaking Basque newcomer, and creating accessible social centers for the Basque community. The Noriega sat across the street from the Southern Pacific Railroad depot in Bakersfield.

Boarding houses were modest in size—the majority were two-story structures facing onto streets—and utilitarian, rather than luxurious, in character. A typical ground floor consisted of one large dining room and bar. The floor above had rooms for boarders and visitors. The main clients of the boarding houses were Basque sheepherders, whose wages found their way to these establishments one way or another. In winter, Basque workers went to town to spend part of their pay on women, gambling, alcohol, and food. All could be found within the walls of boarding houses, which grew over time and added restaurants, bars, and all kinds of entertainments. During the rest of the year, when sheepherders were out on the range, hotel keepers still provided important services for them, including storage for their belongings, and mailboxes for receiving letters and packages. Hotel keepers also cashed paychecks and made loans to sheepherders who had limited access to banks.

Starting in the early 20th century, Basque hotel bars attracted a broader working-class clientele, and sometimes became a social problem. In March 1912, during a dispute about a card game on the Noriega’s porch, a construction worker shot Mexican sheepherder Genaro Silva to death. But with danger came dynamism, more visitors, and even more business activity.

Basque boarding houses became recruiting centers for sheep laborers—“Sheepherders Wanted” notices were common on their bulletin boards—and also served as information centers for grazing and livestock marketing. A newspaper advertisement of 1899 recommended stopping by the Iberia Hotel “for reliable information as to pasturage and fat stock of all kinds.” Boarding-houses served as a lost-and-found for local ranchers’ livestock. Owners of lost sheep, cattle or horses posted notices at these hotels, offering rewards for their animals’ return.

Lamb and wool dealers representing large meatpacking firms and wool merchant companies met at these hotels to do business with woolgrowers. Woolgrower associations, both local and national, turned boarding houses into their unofficial headquarters, using them for auctions, meetings, and even lamb-butchering exhibitions (a bit of marketing to encourage lamb consumption in the United States). Woolgrowers also held lamb cookery demonstrations and informative lectures to create further market opportunities for sheep producers. Select boarding houses became major showcases in this conquest of the American table. On October 4, 1941, the Kern County Woolgrowers Association featured a lamb-cutting demonstration at the Noriega Hotel.

Over time, these places, once simple destinations for immigrants, turned into what I call “sheep houses,” devoted more to industry. Still, a certain style of democracy prevailed. At boarding-houses, you’d find sheep laborers, ranchers, Forest Service employees, government officials, dealers, bankers, and railroadmen, all talking together. Meals were often served to dozens of men and women, all seated at one long table.

In the late 1960s, Basque immigration slowed and the sheep business began to fade. Some boarding houses closed, but many were repurposed as Basque restaurants—some of the first, and most popular, ethnic businesses in the American West. Many such restaurants survive today, including the Wool Growers Restaurant in Los Banos, California; the Star Hotel in Elko, Nevada; and Leku Ona in Boise, Idaho.

The Noriega Hotel was on this list, too, and perhaps it will retain some of that history, in a new location. Whatever happens, I’ll never forget those long tables at the original space, covered with red cloth. And I’ll remember how the waitress would bring me large bowls and plates filled with salad, green peas, beans, potatoes, bread, meat… Such big quantities! Such excellent food!