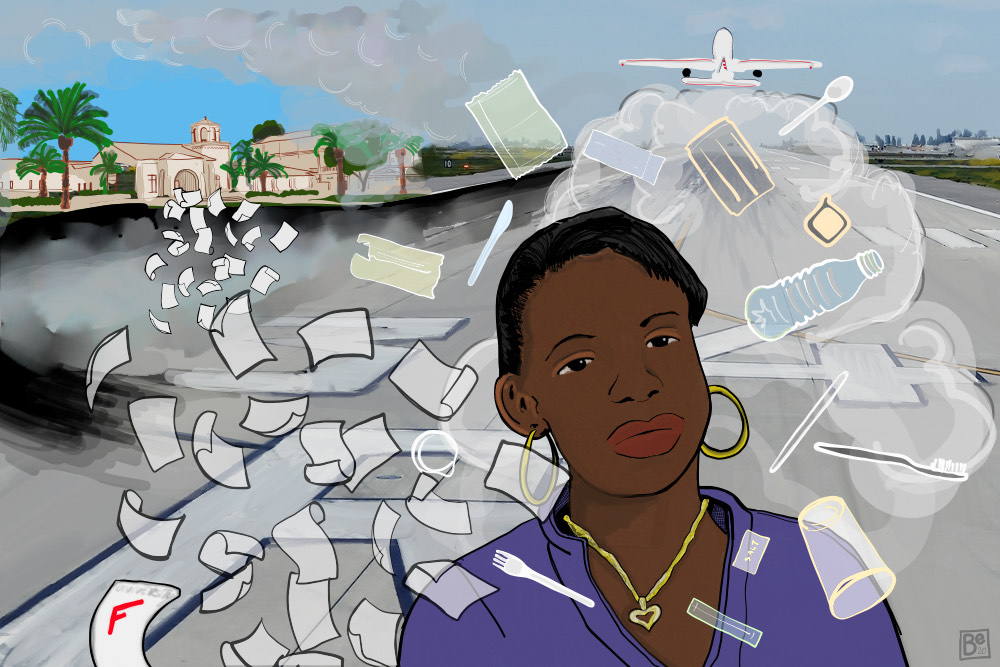 The airlines provide barf bags, but the dirty secret is that people often don’t use them. They throw up on the floor and the seats. This is not a society that cleans up after itself.

This is one of the lessons I learned, all too well, when I was trying to support my college education by cleaning the insides of airplanes at LAX in the middle of the night.

When people think about working at the airport, they often think of the romance of being a pilot or a flight attendant, traveling for free, being paid decently, maybe meeting a few celebrities in first class. They don’t often think about working on “the ramp” side of the airport, the behind-the-scenes jobs that few people seek out, but can teach you quite a bit about life and yourself.

I’m still surprised I ended up cleaning planes. When I attended Long Beach City College in 2013, I believed life could not get any better. I had good friends. I was passionate about my major (sociology). I even enjoyed the astronomy lectures, despite their tendency to put the class to sleep. A typical Tuesday night consisted of listening to my favorite Pandora radio station while writing psychology terms on an index card. I couldn’t have been any happier.

But by the middle of the semester, my contentment started to decline. The trouble was financial, not academic.

It’s no secret that college is expensive. I received financial aid, and I was able to cover the cost of enrollment, books, supplies, course materials, and additional school-related fees. But I could not afford housing, transportation, food, healthcare, or other basic necessities. The longer each semester went on, the harder the choices became. In a given week, I often had to choose between eating lunch and having bus fare to attend class.

When spring semester ended that first year at Long Beach City College, I had good grades, and books I no longer needed, but I did not have two quarters to my name. I decided that if I was going to be able to afford to be a full-time student, I would need to work a full-time job.

I applied for every entry-level job I could think of. I applied at the nearby McDonald’s and was told I was overqualified. I applied for a nine-week certified nursing program but could not wait nine weeks to receive my first stipend, or payment, so I had to deregister.

Eventually, I applied for janitorial work with a contract company under American Airlines at the Los Angeles International Airport. The contractor granted me employment, and on paper, it appeared to be a pretty decent job. We received full-time hours, a flexible schedule, heath care benefits, and decent pay ($9.40 per hour was OK in 2013, when the California minimum wage was $8).

I started working at the airport in November 2013 as a cleaner of aircraft cabins. My first shift at the airport was a graveyard shift, where I detailed aircraft of varying sizes. After a safety briefing, during each shift my coworkers and I were split into crews of five to six people, and we were assigned three to five aircraft.

As a cleaning crew, we spent around an hour or two doing “deep cleaning” on each aircraft. During the graveyard shift, “deep cleaning” meant everything—cleaning each tray table, window, wall, and armrest, and securing all compartments in the cabin. We cleaned and restocked the lavatories, cockpit, and galleys. We also checked every safety compartment and replaced any missing items.

And then we had to dismantle the cabin, essentially doing an extensive security search that involved taking the aircraft apart. We pulled all the cushions of the seats up, opened all the surrounding compartments, and checked all the seals around the seats to make sure nothing had been tampered with. That’s right, the TSA does not secure aircraft; cabin cleaners do.

This could be disgusting work. Planes would be relatively clean if the flight had been from some place nearby, like San Francisco or Las Vegas, but when planes were coming in from London, Sydney, Narita or Hong Kong, it was horrible. Trash would overflow every bin, and was stuck in every compartment. You’d find throw up in the sink, and feces spread in places both inside and outside bathrooms.

We didn’t always have enough supplies. One time, we ran out of cleaning chemicals and trash bags. It was a disaster. We mixed soap and water to clean, but that does not really disinfect. And you have to clean everything, all of it, or else. An unclean plane is considered a security breach.

Despite such work, I discovered—to my surprise—that I enjoyed how peaceful the airport could be at night. The work went by fast. I enjoyed spending time with my co-workers and became good friends with many of them. I also began learning about other jobs at the airport. The various opportunities fascinated me so much that I considered a career there. I even thought about changing my major from sociology to aeronautical engineering.

But working at the airport and going to school did not fit easily together. In the spring of 2014, a new semester at Long Beach City College was beginning. My intentions were to juggle both school and work at the same time, but it was hard to do both. Some days I was too exhausted after working a graveyard shift to get to class. Other days I didn’t have time to complete school assignments because of a busy workday. I also struggled at work. On the days I went to school, I would oversleep for work and come late.

By fall 2014, I had gone from taking a minimum of four classes a semester to taking only one class—and I failed it. At the end of the fall semester, I was on academic probation and I had received a final warning for my attendance at my job. Once again, I was between a rock and a hard place and had to make a decision. I wanted to go to school and excel, but I also had grown accustomed to financially supporting myself, as well as my family. Ultimately, I chose to temporarily stop going to school and to continue working, a decision I would later regret.

My family was disappointed that I was no longer enrolled in school. My grandmother, with whom I lived at the time, stressed that a job is temporary but an education is forever. I justified missing school by deciding that I would get everything I could out of the work experience. So I rose beyond cleaning, to working as an operational dispatcher for cabin services in the American Airlines traffic control center. As an operational dispatcher, it was my responsibility to assign a cleaning crew to each incoming aircraft as it arrived and to assign a timeframe to clean the aircraft to prevent departure delays.

Being a dispatcher was unlike being a cabin cleaner. Where cabin cleaning required much physical work, being a dispatcher required a lot of planning, strategizing, and documentation. My daily shift began at 4 a.m., before the first aircraft would land at the terminal for American Airlines.

The purpose of the early shift was to plan the day, but the airport was so unpredictable it was hard to plan even two hours ahead. Sometimes, I would assign eight employees to clean a wide-body aircraft leaving for Miami in two hours, and within 15 minutes the same aircraft would suddenly leave instead for Sydney, without waiting for the cleaning we had planned. Eventually I stopped planning out the day and I started exercising instantaneous solutions to problems as they came—thinking on my feet—which worked out well.

Unfortunately, management loved this skill so much they overworked me. I often felt pressured and mistreated—forced to dispatch for eight hours straight without a lunch or a break. When I tried to bring it to the attention of a manager, my complaints would be dismissed. I thought about quitting and going back to being a struggling student, but I feared that might be worse.

Then new management arrived. They pushed even harder, demanding even more work without breaks, and forced overtime. People were terminated or quit and weren’t replaced. As a dispatcher, I went from having 40 employees (10 crews of four employees) on a shift to having 18 to 20 people (6 crews) in a matter of months. But there were still just as many planes to clean.

Spring break and the holidays were the airport’s busiest times, with American adding between 20 and 40 flights a day. These weeks broke our team. We were understaffed and unprepared. I ended up helping exhausted coworkers clean planes, or cleaning aircraft by myself. By the end of the holidays, co-workers, after picking up blankets from a New York flight and diapers from a Miami flight, would be sick. Our security checks of the planes felt rushed. We complained, and we asked for raises—each cleaner was doing the work that three people had once done—but got nowhere. We couldn’t quit. My coworkers and I depended on the income.

I tried to think of ways to make the job easier for my coworkers. During one miserable day in 2016, I decided to become a supervisor. Fortunately, the contract company again had new management, which was open to hearing from employees. I wasn’t everyone’s favorite supervisor—some people resisted my efforts to change things—but I felt I was being heard. By 2017, more employees were being hired, and coworkers were getting raises and promotions—and recognition for their hard work.

When 2018 began, I found myself at peace with work, so I approached my manager about my return to school. I asked if he would be willing to work around my schedule so I could go back and finish. To my surprise, he said yes. I had been out of college for three years, and planned a slow return, taking just one class. But just as the new semester was about to begin, we learned that our company lost its cabin services contract with American Airlines. By the fall of 2018, a new company would take over the cleaning and securing of American Airlines aircrafts at LAX.

I felt stupid. I had put a lot into this job, even sacrificing my education, and now I would have neither job nor education. If I could have found a way to stay in school full-time, I would have had my bachelor’s degree in spring 2017.

The new company hired me in the fall of 2018, but it felt like all the progress we’d made before the change in contractors had gone out of the window. I left and never returned.

I still talk to co-workers there, many of whom have lost work and jobs because of the decline in air travel under COVID. The airport taught me lessons that school could not—about business, strategizing, work ethics, the value of a dollar (we worked so hard for our money), and how to clean up throw up on a flight from London.

But I wanted a different journey, and a different career. And I wanted to go back and complete school. After five years dealing with dirty planes at LAX, and never flying on one of them, I’d finally learned what my grandmother meant when she said that your job is temporary, and your education is forever.