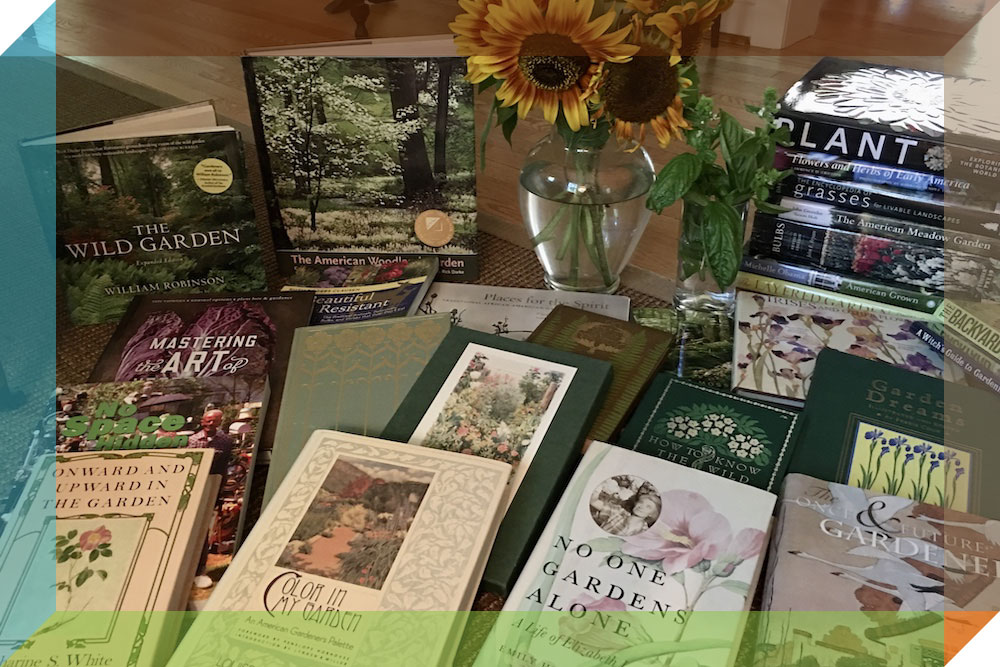 My gardening habit was born on the day my mother died. Grief-stricken beyond belief, and thinking that her boundless spirit might linger still in the sun-loving plants she had long nurtured, I dug dozens of them up and brought them all back to my place.

That summer, I planted my mother’s salvias, coneflowers, black-eyed Susans, coreopsis, yarrows, sedums, verbenas, and asters where they were never meant to be—in the shade. Over that first year as I treaded, unskilled but earnestly, into gardening, those vibrant creatures (probably endowed with just enough of my mother’s spirit to forgive me) taught me their ancient knowledge. Two decades later, her plants are still with me, transplanted into sunny niches around my garden, which is nestled into the edges of an ancient forest along Maryland’s Sligo Creek, a tributary of the Anacostia River near Washington, D.C.

A plant knows its survival depends on the soil’s structure and nutrients, the right amount of sunlight, and the climate, topography, and ecosystem, as well as the availability of creatures evolved to the precise morphology needed to pollinate its reproductive organs. Plants are masterworks of precision and industry. Then there’s me, the witless gardener.

I remain fascinated by the individual plant and my arrogant desire to make it fit somehow. So my garden is a kind of created chaos. Luck is my winning charm. A clematis finally takes root where I’ve settled it after many have perished before. My peonies grow up too close together; some of my lilies never flower, my asters topple over midway through the summer, my plumbago replicates and scrambles over the tops of my annual herbs. But the creation is all mine.

Over the years I will admit to gaining some expertise. After my roses bloom in spring, a tiny mite renders their leaves into a lacework that I hide behind a well-placed dahlia bulb that grows up just in time to mask the destroyed rose bush. A fern planted amidst my hosta sometimes keeps the deer from gorging on those big leafy beauties. I’ve artfully learned to grow foods like eggplant and peppers as display plants in my front yard, and a well-placed hot pepper plant (like the nasty Carolina Reaper with a 2.2 million Scoville rating) will sometimes discourage my nemesis, the deer. I indulge the catbirds, who steal my blueberries but delight me with their polysyllabic songs, and I am secretly enchanted by the rabbits who nip at my bean plants and the squirrels whose circus antics amuse me even though they have just dug up and run off with my bulbs. And yes, when I’m down on my knees and my gloved hands are working the soil, sometimes, I can still conjure up my mother’s patient voice guiding me.

Since I started collecting garden books 20 years ago, I’ve kept my obsession mostly out of sight, stashing them in spaces where visitors wouldn’t notice them piling up. To this day, even my husband may not be aware of the number of books I’ve brought into our home.

If my garden was born out of grief, the seeds of my garden library grew up around the long fascination my mother and I shared for books—especially vintage volumes with their elegant tooled bindings. About a dozen years after her death, I was visiting Thuya, a public garden in Sea Harbor, Maine. Thuya was endowed with exceptional vistas of vine-covered pergolas and burbling fountains and ponds surrounded by water lilies, all of it gathered behind heavy ropes to separate the visitor from any possible hope of imagined ownership. But after I roamed the grounds, pen and pad in hand to take notes, I went inside this dark cavity of a cottage-style house.

Upstairs was a large nook overlooking the garden and filled to capacity on built-in shelves was a collection of musty, but absolutely charming, garden books. I wanted to curl up in a corner and begin years of reading. I wanted a list of the titles. I wanted to own them. Each one.

The author of the first book I collected was, like me, a magazine editor. Unlike me, she was rich and famous and celebrated. Katharine S. White began her 34 years at the New Yorker in 1925. She was married to literary fame (E.B. White) and mother of journalistic excellence (Roger Angell). And she kept a garden, which she wrote about for 12 years in a column called “Onward and Upwards in the Garden.” Her narratives were chock-full of anecdotes from the correspondence she kept with other gardeners and seed sellers and nursery owners and the catalogues she perused every winter. Her book of the same title was published posthumously by her husband, with a loving tribute that recalled how she would come home from the city and, without changing her tweed suit and elegant Ferragamos, would go tripping into the garden and come back with her high-end heels muddied and scratched. (In emulation, I once found a pair of these designer beauties in a secondhand store and tried to be carelessly chic from office to garden, but only ended up irritating my bunions.) Like my mother, she was survived by her plants, as E.B. White noted:

As the years went by and age overtook her, there was something comical yet touching in her … small, hunched-over figure, her studied absorption in the implausible notion that there would be yet another spring, oblivious to the ending of her own days, which she knew perfectly well was near at hand, sitting there with her detailed chart under those dark skies in the dying October, calmly plotting the resurrection.

I used White’s compendium of publications and gardeners to begin my library. After acquiring some of the books she read and researching the people she consulted, I wrote about them, fine-tuning my own writing for several years when blogging was all the rage. The entries I logged under “Garden Putter” were the tailings of all the mindful muttering that fills a gardener’s head while puttering about in the soil.

The classic How to Know the Wild Flowers by Mrs. William Starr Dana is absolutely my favorite, and I own two copies. I dare not open the original because it is so fragile and stuffed with dried examples of the flowers that the book’s first owner collected. But to read and to use, I bought the 1989 reprint, gorgeously reproduced with Marion Satterlee’s original botanical illustrations and enhanced with new color plates by Manabu C. Saito. I carry it into the forest with me to study the wildflowers, just as Mrs. Starr Dana ventured out into the woodlands surrounding her home after she was widowed young and forced to wear black and limit her activities. Her nature hikes with Satterlee became her only pleasure. And her book is deeply researched with not only the tools for making an identification, but also quotes from the poets of her day and snippets from Plato and other ancient naturalists. 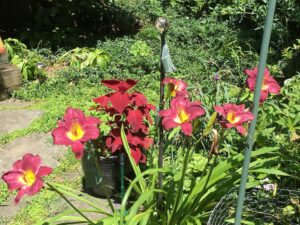 Mrs. Starr Dana endows the Canada violet with the “sprightly self-assertion which is peculiarly charming, perhaps because so unexpected.” And I can just imagine her down on her knees in the soil, despite her confining garments, watching with horror the menacing trap of a carnivorous plant. “The round-leaved sundew is found blossoming in many of our marshes in midsummer. When the sun shines upon its leaves they look as though covered with sparkling dewdrops, hence its common name. These drops are a glutinous exudation, by means of which insects visiting the plant are captured; the reddish bristles then close tightly about them, and it is supposed that their juices are absorbed by the plant … the rash visitor rarely escapes.”

Over the years, my library has continued to grow, and no matter the season, I wake up before the sun, so I can pull open a friend. Here is the delightful and tireless Celia Thaxter, who wrote about the exhaustive efforts it took to build a garden on an outcropping of rock and sand off the coast of Portsmouth, New Hampshire. To read her 1894 account, An Island Garden, is to acknowledge the delight of sowing a seed that every gardener knows so well:

I think of all it holds for me of beauty and delight, and I am filled with joy at the thought that I may be the magician to whom power is given to summon so sweet a pageant from the silent and passive soil.

Or taking the moment to admire the industry of migrating birds:

“They come suddenly down from the sky in myriads, on their way to the continent, and I have known them to strip the little plot of every green shoot in a single day, utterly bare … but I do not lose patience with the birds, however sorely they try me. I love them too well. How should they know that the garden was not planted for them?”

Currently, I’m reading one of my favorite botanical heroes, Robin Wall Kimmerer. Gathering Moss, her venture under the microscope into the miniature forests that grow up on fallen logs and the trunks of trees, is a Lilliputian journey for any budding naturalist. I’ve just bought another of Mrs. Starr Dana’s field guides, How to Know the Ferns, and a photographic work by Vaughn Sills, Places for the Spirit: Traditional African American Gardens.

Since I started collecting garden books 20 years ago, I’ve kept my obsession mostly out of sight, stashing them in spaces where visitors wouldn’t notice them piling up. To this day, even my husband may not be aware of the number of books I’ve brought into our home. Occasionally, I will give one or two away to gardeners in the community garden I run, but when I do, I will buy other copies to replace them. That’s because curled up with my holdings, they make anything possible. They endow my intellectual quest for knowing, or trying to know, about plants, design, botany, and ecology, including the people, who, like my mom, loved to garden, and what it means, from the highest echelons of society to the practical kitchen cottage to the patch finders who scratch out a spot of soil.