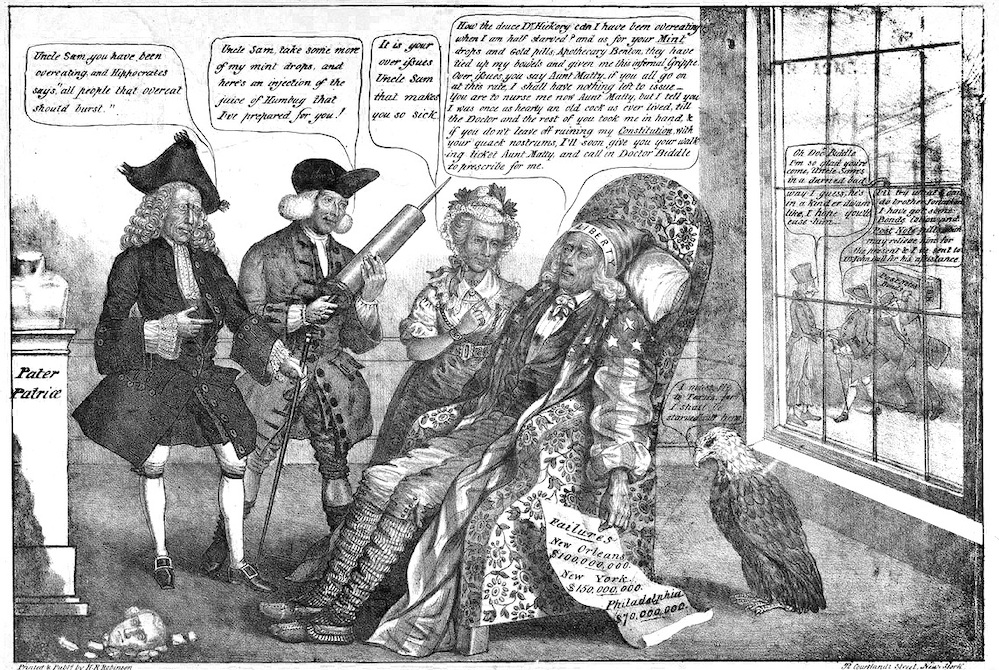 As COVID-19 ravages the U.S. economy, many look to history for solutions. But as this 1837 lithograph suggests, times have changed a great deal since earlier panics and turndowns. Here, artist Edward Williams Clay lays blame for a severe recession on President Andrew Jackson’s opposition to paper money. Courtesy of Edward Williams Clay/Library of Congress.

Unemployment levels not seen since the 1930s have prompted journalists and pundits in the U.S. to look back to previous eras—particularly the Great Depression—for lessons on how to escape the current economic crisis. What are the main lessons that historians and economists have learned from previous recessions, and how might they be applied by policymakers in the time of COVID-19? Unfortunately, there are few straightforward answers. Previous economic eras, when understood with all of their nuance, complexity, messiness, and ambiguity, do not point to an obvious path ahead.

As a general rule, the farther back in time one travels, the more difficult historical analogies become. The American economy was a very different beast in 1787 when the founding fathers drafted the U.S. Constitution. There were only three banks in the entire country and Spanish silver dollars could still be used to pay taxes. The poor state of overland transportation made it much more convenient, cheaper, and timely to ship goods from Philadelphia to London than to Pittsburgh.

By the 1820s and ’30s, America was quickly becoming a more industrialized economy, though modern observers may still regard the complex details of the political and economic convulsions of this period as akin to visiting a foreign country. This was the era of “the Bank War,” President Andrew Jackson’s famous political conflict with Nicholas Biddle, the president of the Second Bank of the United States.

The Second Bank was the Federal Reserve of its time. Like today’s Fed, which adjusts interest rates in order to provide price and employment stability, the Second Bank served as the nation’s central bank and performed important regulatory functions. It serviced the nation’s public debt, managed the Treasury Department’s fiscal priorities, propagated a nationwide uniform currency, and curbed excessive lending among the country’s numerous state banks. Through its network of branch offices and overseas agents, the Second Bank facilitated domestic and international trade.

But the financial tools available to Biddle and the Second Bank were limited compared to what’s currently at Fed Chair Jerome Powell’s disposal. Biddle could make minor adjustments in the nation’s overall money supply by selling government bonds, for example, but this measure paled in comparison to the complex and far-reaching operations conducted by today’s Fed. To inject money into our sputtering economy and lower interest rates today, the Fed purchases trillions of dollars of U.S. Treasury bonds and other assets. It acts on a scale unimaginable to anyone living in the 1830s.

Even expert knowledge of previous recessions may only help us so much in the current chaos; there will always be some degree of uncertainty and contingency in the way things panned out.

This and other remarkable differences between the political economy of the U.S. in the 1830s and today render tenuous any direct comparisons between the two eras. Today’s GDP of $20 trillion is several hundred times greater than the $1 billion economy of 1830, which is equivalent to about $50 billion in today’s money. The Treasury Department, which collected around 90 percent of its revenue from tariffs, often ran budget surpluses (a rarity over the past century). Information didn’t flow with the ease it does today. It took at least two weeks to deliver a newspaper from Washington, D.C., to St. Louis. For a variety of reasons, there were no reliable unemployment statistics at the national level. Seventy-eight percent of the workforce was agricultural at the time, compared to less than 5 percent today. Slavery was fundamental not only to the South’s political, social, and economic structure, but also to the nation’s.

Today’s policymakers are thankfully not drawing inspiration from the antebellum era—a time in which risky financial institutions sometimes constructed houses of cards that collapsed into devastating economic panics, and did little to alleviate the crises’ worst effects. But some leaders are trying to take cues from the U.S. response to the Great Depression. In the late 1920s, a perfect storm of events came together to create the worst economic crisis the nation has ever faced: a roughly 10-year period of widespread bankruptcy, rural poverty, mass evictions and migrations, urban bread lines, falling wages, crippling deflation, idle factories, and workers’ strikes.

No single factor caused the Depression, and no single policy ended it. The stock market crash of October 1929 wiped out the life savings of millions of Americans, making them more reluctant to spend money. But even before the crash, numerous red flags signaled a struggling economy. Falling commodity prices made it difficult for farmers to pay back loans. Major economies in Europe struggled to meet the debt payments and reparations left over from World War I. High tariff rates strangled world trade. Economic inequality and a weakened middle class stunted consumer demand.

All of these worrisome developments were amplified and transmitted to the rest of the world through the international gold standard, a factor that historians and economists often point to in order to explain the severity and duration of the Depression. This was a system where most of the major world currencies were exchangeable in gold on demand, at a fixed rate. Neoclassical economists of the time believed that such a system would be automatic and self-regulating, requiring no intervention or regulation by central bankers.

But the gold standard did not work as intended. One of its many flaws was that countries did not always abide by the same rules, a phenomenon resembling the imbalances that plagued the Eurozone in the last decade. In 1931, the Fed made what was, in retrospect, a terrible blunder by raising interest rates. The nation’s central bank was attempting to rein in the excessive speculation in stocks that had contributed to the crash of 1929 and at the same time acquire enough gold to uphold a strong dollar. Conventional economic thinking held that this was the right move. But with the country already mired in a deepening recession, raising interest rates proved costly: Nearly one-third of the country’s banks failed, foreign investment declined, and unemployment levels approached a staggering 25 percent. Central bankers in virtually every major economy around the world made similar mistakes. Only when countries abandoned the gold standard did recovery begin.

The actions that ended the Great Depression provide clues to the sorts of things central banks and regulators can do to help—but they hardly offer us easily translatable solutions for the current crisis. We have no gold standard to abandon today. New Deal agencies inaugurated the modern welfare state, imposed stricter financial regulations, and recognized workers’ rights to collective bargaining, but some of them also perpetuated the racism of Jim Crow. Work relief programs like the Works Progress Administration (WPA) employed millions of workers, but it was really government spending on the military during World War II, furthered by the growth of the Cold War military-industrial complex, that ushered in an unprecedented era of American prosperity. So, would increasing America’s already-enormous military budget be helpful today?

The larger point here is not to eschew historical analogies or ignore the instances in which they can deliver fairly straightforward verdicts on policy questions. Rather, it’s to note that even expert knowledge of previous recessions may only help us so much in the current chaos; there will always be some degree of uncertainty and contingency in the way things panned out.

While we have an extensive historical record of what conditions and policies helped the U.S. recover from the Great Depression, we will never have the scientific certainty of running an experiment 100 times to see if it was FDR’s confidence-inspiring speeches, or raising the price of gold, or creating the WPA, that helped the most. All we have is the singular experiment of the historical record. An approach to history that leaves plenty of room for ambiguity and uncertainty allows us to appreciate the uniqueness of the past and present, to note significant changes over time, and perhaps above all, to recognize the limits of our expertise.