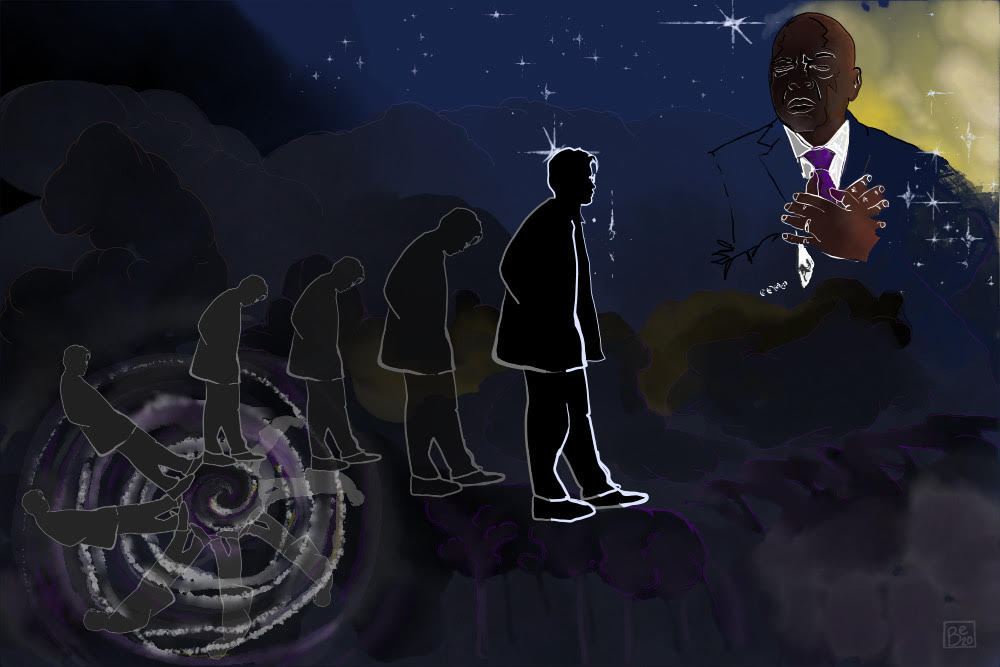 Dante’s Divine Comedy, an epic poem recounting the Florentine’s journey through Hell, Purgatory, and Paradise, remains the go-to guide to the afterlife, the world’s most famous travelogue for the great beyond. But Dante matters more than that. Dante’s encounters with the dead offer enduring lessons for the living, including one that speaks with vital urgency to us today.

Consider California Gov. Gavin Newsom’s press conference on June 5, 2020, as a Dantean case study. The governor insisted that “we”—institutions and the community at large—must change to combat systemic anti-Black racism. Urging individuals to “take a stand,” he quoted the medieval Italian poet: “Dante infamously said that the hottest place in hell is reserved for those in a time of moral crisis that maintain their neutrality.” The lesson drawn by Gov. Newsom? “This is not the time to be neutral.”

This might be the place for me to stop, tear out my hair (or what’s left of it), and object, “Dante never said those words! They imply that neutrality is the worst sin for Dante, but treachery is, and the punishment for that sin isn’t fire but ice!” But I won’t do that, because the complicated life of this fictitious quotation is so deeply embedded in U.S. history that the correction is pointless.

Besides, Dante has only himself to blame. What he does say about people who stay neutral instead of taking a stand is in fact so remarkable that it’s easy to see how admirers could misquote his Inferno yet stay true to its message, as Gov. Newsom did.

Once Dante and his guide Virgil pass through the Gate of Hell (“Abandon all hope, you who enter,” its inscription famously warns), they must traverse a stretch of land before reaching the river Acheron, across which lies the first circle of Hell. Dante creates this space between the gate and the river to teach a lesson—essential to understanding him and his moral universe—that we must grasp before entering Hell proper.

The poet populates this infernal periphery, or suburb, with the souls of those “who lived without disgrace and without honor.” These neutral souls, numbering many angels (for not choosing between God and Lucifer) as well as human beings, are so vile it’s as if “they were never alive.” Fence-sitters, wafflers, opportunists—these and other labels are often pinned on neutral individuals whose underlying moral rot is cowardice that makes them unwilling to take action when needed for the greater good. Their location in Dante’s underworld is marginal, but their significance is anything but.

Think about this. Dante, who will later show pity, sympathy, respect, and even reverence for certain sinners punished in the circles of Hell, tells us that these outlying neutrals—“despised by God and by His enemies”—deserve no recognition at all.

“Let’s not speak of them,” Virgil says to his companion in a verse devastating in its matter-of-fact disregard, “just look and move on.”

What Dante sees vividly confirms the moral failing of these wretches unworthy not only of heavenly glory but of eternal suffering in “real” Hell—as if that would somehow improve their lot in the afterlife. We are introduced here to the infernal law—the poet calls it contrapasso—whereby the damned receive a form of punishment befitting their sin. Because they lacked conviction and courage, an endless trail of waffling souls chases a flag that is never planted. Because they felt no prick of conscience and so were as good as dead, the neutral are stung repeatedly by wasps and horseflies, their tears and blood pooling on the ground, where the mixture feeds disgusting worms.

Dante condemns moral cowardice so severely because he finds it personally reprehensible. Yes, there is biblical and medieval precedent. “Because you are lukewarm, and neither cold nor hot,” thunders the Book of Revelation, “I will spew you out of my mouth” (3:16). In a 4th-century apocryphal text, souls “neither hot nor cold” are plunged in a river of hellfire “because they were found neither in the number of the just nor in the number of the impious.” But Dante describes his cowardly neutrals in much greater detail while also excluding them from Hell proper to serve an extra helping of contempt. Why?

Dante had his faults, pride chief among them, but he was in no way a coward. He showed physical courage by fighting for Florence as a young cavalryman at the Battle of Campaldino on June 11, 1289. As many as 3,500 of some 21,000 soldiers died that day. He was no less courageous in political battle a decade later when, as a prominent member of Florentine councils, he took positions hostile to medieval Europe’s most influential powerbrokers, including the pope.

The poet populates this infernal periphery, or suburb, with the souls of those “who lived without disgrace and without honor.” These neutral souls, numbering many angels (for not choosing between God and Lucifer) as well as human beings, are so vile it’s as if “they were never alive.”

Pope Boniface VIII retaliated by orchestrating events precipitating Dante’s exile from Florence. The poet’s rejoinder, even with a bounty on his head, was to write the three parts of his Divine Comedy (Inferno, Purgatorio, and Paradiso)—arguably misfortune’s supreme literary gift to the world. In the Inferno, he has an earlier pope foretell the arrival of Boniface, who is still alive at the time of the journey through Hell (Dante’s damned can see the future). Dante rebukes many of the highest spiritual and political rulers in the land for their negligence and corruption. Challenging those in power was the exiled poet’s calling card.

When Dante saw among the neutrals the one who “through cowardice, made the great refusal,” he very likely meant—without pronouncing the name—Pope Celestine V, whose abdication produced the hated Pope Boniface VIII. This event contributed greatly to Dante’s view of moral cowards as more contemptible than individuals guilty of more serious sins (theologically speaking) yet at least having convictions and acting on them.

Engaged readers have in turn embraced Dante’s harsh treatment of these neutral souls as a condemnation of indifference and a call to action on questions of moral, political, and social justice.

U.S. politicians and cultural figures in the 19th century extolled Dante as a champion of liberty, often as a voice in the fight to eradicate slavery. The poet Henry Wadsworth Longfellow and the Massachusetts Senator Charles Sumner enlisted Dante in the abolitionist cause, as did Frederick Douglass, Henrietta Cordelia Ray, and other “freedom readers,” the title of Dennis Looney’s 2011 book on the Italian poet’s African American reception. Looney showed how Ray, a poet herself, welcomed Dante into the ongoing struggle for freedom and justice by praising his “stern denunciation” of “the law’s lax mandates” and “the false decrees” of rulers. Charles Sumner believed that Dante captured “the penalty of indifference” to opposing slavery in his depiction of the neutrals, “dreary souls who had been ciphers in the great conflicts of life.” Senator Sumner was beaten nearly to death by a Southern congressman for his unrelenting abolitionism.

Recent investigations have identified politicians, activists, and writers from the early 20th century to the present who burnished Dante’s reputation as the unimpeachable judge of shameful apathy and inaction. Teddy Roosevelt, as Akash Kumar, a scholar of medieval Italian culture, has shown, was an enthusiastic reader of Dante who probably had the poet’s neutrals in mind when he contrasted “those cold and timid souls who know neither victory nor defeat” with the “man who is actually in the arena” in a speech at the Sorbonne in 1910.

Gov. Newsom’s misquotation of Dante’s text—at least the implication that neutral souls inhabit the worst, or lowest, place in Hell—is a mistake that goes back as far as World War I, reports medieval literature scholar Laura Ingallinella, when a Baptist preacher cited the line to promote intervention. The quotation reappeared in calls for intervention in World War II, but the heat wasn’t added until Henry Powell Spring, a spiritual philosopher, placed Dante’s moral cowards in “the hottest place in Hell” in 1944.

The complete pseudo-verse soon grabbed the attention of John F. Kennedy, who—as University of Virginia Italian Studies scholar Deborah Parker explains—copied it into his book of quotations in 1945. He first cited it publicly at an event hosted by the National Conference of Jews and Christians in 1956 to praise U.S. Supreme Court Justice Louis Brandeis and other men for taking strong stands against religious and racial bigotry. JFK repeated the line over the years as one of his favorite sayings when denouncing inaction at times of moral crisis.

Martin Luther King Jr. came to see the Vietnam War as a major moral crisis. At a New York City rally in 1967, he opened his address opposing the war by stating his agreement with Dante on the abomination of neutrality—rightly punished in “the hottest places in Hell”—at such a time. “If modern man continues to flirt unhesitatingly with war,” Dr. King warned, “he will transform his earthly habitat into an inferno such as even the mind of Dante could not imagine.”

Building on this illustrious tradition, supporters of Black Lives Matter have fashioned the Dante-inflected quotation—often substituting “darkest places” for “hottest places”—into a social media meme. Showing up on #BlackLivesMatter as early as 2014, its usage proliferated in the two-week period following the murder of George Floyd on May 25, 2020.

It is within this context—and in this period—that Gov. Newsom also cited the famous “Dante” statement on neutrality as an incentive to fight anti-Black racism. Whatever fault lies in attributing those exact words to Dante, it pales in comparison with how well they capture the poet’s feelings about the many sorry souls who, by refusing to act in times of trouble, deserve not just condemnation but total disregard.

To overcome this trouble—“to see the stars again” as Dante does at his exit from Hell—it takes another kind of trouble, the “good” kind, a “necessary trouble,” in the words of the late congressman and civil rights leader John Lewis. Lewis repeated these words in an essay he wrote shortly before his death this July. “You must also study and learn the lessons of history,” he reminded us, “because humanity has been involved in this soul-wrenching, existential struggle for a very long time.” John Lewis shines brightly among those who radiate the moral courage that Dante so admired.