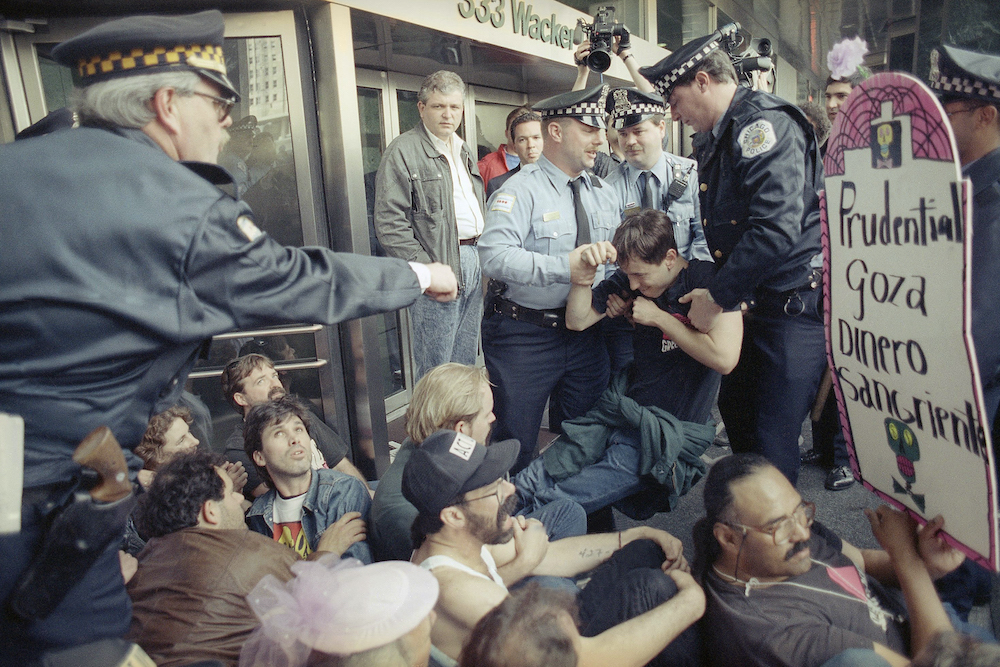 A protestor is dragged away from an ACT UP national demonstration in front of the Mutual Life Insurance Co. Building in Chicago on April 23, 1990, where hundreds of people from around the country showed up to protest inadequate health care coverage by insurance companies. Courtesy of Charlie Bennett/Associated Press.

To be a survivor of wars, of diseases, of earth-shattering moments is to be an inheritor. You inherit the grief that comes with loss; but you also inherit the memories, and the responsibility and privilege of preserving those moments, of carrying on the legacies of those lost.

The role of memory-keeper is a tangled one, as Rebecca Makkai discovered when she interviewed patients, doctors, nurses, activists, and historians who lived through the AIDS epidemic for her 2018 novel, The Great Believers. The book is a provocative read during the COVID-19 crisis as we find ourselves in a state of anticipatory grief, knowing that our world is and will be forever changed by this moment, but not yet knowing what picking up the pieces will look like—or who will be left to do so. Seeing the pandemic paralleled over the summer with epidemics of both economic inequity and violence against Black lives, we are watching every injustice of our society revealed in real time.

Will COVID contribute to another “Lost Generation”? That sobriquet—popularized by Gertrude Stein and her protégé Ernest Hemingway—is most commonly applied to those who came of age during the First World War. It also specifically denotes the Americans who flocked to Paris in the war’s aftermath to try to process their new reality through literature. But Makkai is more interested in the way F. Scott Fitzgerald uses it in his essay “My Generation,” about how the war completely transformed his peers:

We were the great believers. Well—many are dead, and some I have quarreled with and don’t see anymore. But I have never cared for any men as much as for these who felt the first springs when I did, and saw death ahead, and were reprieved—and who now walk the long stormy summer.

The novelist bestows the same title on those who witnessed and suffered during the height of the HIV/AIDS epidemic in the mid-1980s to early 1990s. The U.S. government’s initial reaction to AIDS, which was first documented in 1981, was to ignore, downplay, and dismiss it. Members of the Reagan administration mocked its severity, and the president did not even publicly acknowledge the disease until 1985. By the time he left office in 1989, more than 89,000 Americans had died of AIDS.

In the wake of such incredible loss, the role of memory-keeper is complicated by questions of survivors’ guilt, which Makkai found plagued many of her interview subjects: Did they deserve to tell these stories? Why were they the ones left to do it?

One subject felt guilty about sharing a deceased friend’s story because he thought that had his friend lived, they likely would have grown apart. He told Makkai he felt “unworthy being the keeper of his legacy.” But memories are the way that the dead live on—and it falls to the survivors to protect and share them.

The Great Believers centers around Yale, a gay man living in 1980s Chicago, whose friend group is decimated by AIDS. Employed at a Northwestern University art gallery, he helps acquire the art collection of Nora, a friend’s elderly aunt who studied art in Paris before World War I. Nora has her own reasons for bestowing her valuable collection. Among the pieces are those made by a former lover, an aspiring artist who suffered nerve damage in his hand during the war and committed suicide not long after. Over half a century later, Nora worries he will be lost to history. By donating his artwork alongside that of his better-known peers, she feels she is securing—and passing along—his memory.

The book is a provocative read during the COVID-19 crisis as we find ourselves in a state of anticipatory grief, knowing that our world is and will be forever changed by this moment, but not yet knowing what picking up the pieces will look like—or who will be left to do so.

Much of Makkai’s novel considers how memory and art are intertwined. How do “interruptions of history into our lives” impact people and generations, and how do we contend with those disruptions? Reading diaries from the WWI era, Makkai shared in an interview that she was struck by “severe trauma that was really not dealt with in any way at that time.”

The Great Believers is itself a piece of art crafted in response to traumatic events. As someone who grew up in Chicago during the AIDS epidemic, Makkai was stunned by how little the disease’s devastating impact on the city’s gay community had been documented. She spent several years researching the crisis and interviewing survivors to accurately capture the struggle in her novel. And in empathically transmitting the thoughts and experiences of her characters, whose lives unfold in times not necessarily experienced by her readers, her book becomes a fictional yet very real meta-memory keeper.

When we finally emerge from this current pandemic and period of protest, our vision will be altered and redefined by our memories. We will at once see the world as it was before and as it is after. As Makkai writes poignantly of present-day Chicago through one character’s eyes: “How could she explain that this city was a graveyard? That they were walking every day through streets where there had been a holocaust, a mass murder of neglect and antipathy, that when they stepped through a pocket of cold air, didn’t they understand that it was a ghost, it was a boy the world had spat out?”

In our near future, we will see the empty spaces, the lost potential of lives ended too soon and passions not pursued because so many lives were taken, either by disease or by violence. Speaking of her friends who were never able to return to their studies or cut-short careers, Nora says, “If I told you Picasso died in the war, you’d understand. Poof, there goes Guernica. But I tell you Jacques Weiss died at the Somme, and you don’t know what to miss.”

Whether on an individual or societal level, we will mourn what has been lost—both the tangible and ephemeral. Importantly, we will also see the world as it should be, for grief can be a politicizing force. The higher COVID-19 death rates among people of color, especially in the Black, Latinx, and Native American communities, expose longstanding inequalities in our health care system. The horror of a national death count that is fast approaching 200,000, and the Trump administration’s mishandling of the crisis—worsening the pandemic’s effects and unnecessarily costing lives—could further power the fight for a national health care system and a more equitable economy and justice system.

The fight for health care justice is a battle that those who lived during the AIDS epidemic helped forge. The Great Believers chronicles the cruelty of the Reagan administration’s inaction and that of the bureaucratic health care system, as HIV+ characters struggle to afford drug treatments, grapple with insurance companies to cover their treatment, and agitate for the government to recognize and respond to the crisis.

In encouraging Yale to come to an organizing meeting, a friend tells him, “Everyone I know who isn’t political, it’s just because they haven’t tapped into their anger.” Later, that same friend convinces Yale to attend a demonstration, where he puts his own body on the line. The action Makkai portrays in her book actually unfolded in the streets of Chicago, organized by activist group ACT UP in April 1990. It targeted the American Medical Association’s policy against national healthcare and successfully campaigned for changes at a local Cook County hospital, where beds had been sitting empty due to lack of funding and where female AIDS patients had been denied care. Yale’s politically active friend, a young, white male lawyer, highlights the role of solidarity in the battle: “If we’re not fighting for poor black women who need beds at County … we’re as bad as the fucking Republicans.”

There are lessons to be learned from their activism, ones Makkai says resonate with the current struggles: “[W]e can see … how to support each other through crisis, how to pace ourselves for long-term survival, how to both survive and fight—that you can take care of yourself and fight for yourself and others at the same time.”

For all the loss and heartbreak that The Great Believers lays bare, the core of the novel proves ultimately hopeful because it underscores that we are the memory-keepers of this moment. What we choose to remember and how we choose to respond will define our own legacy.