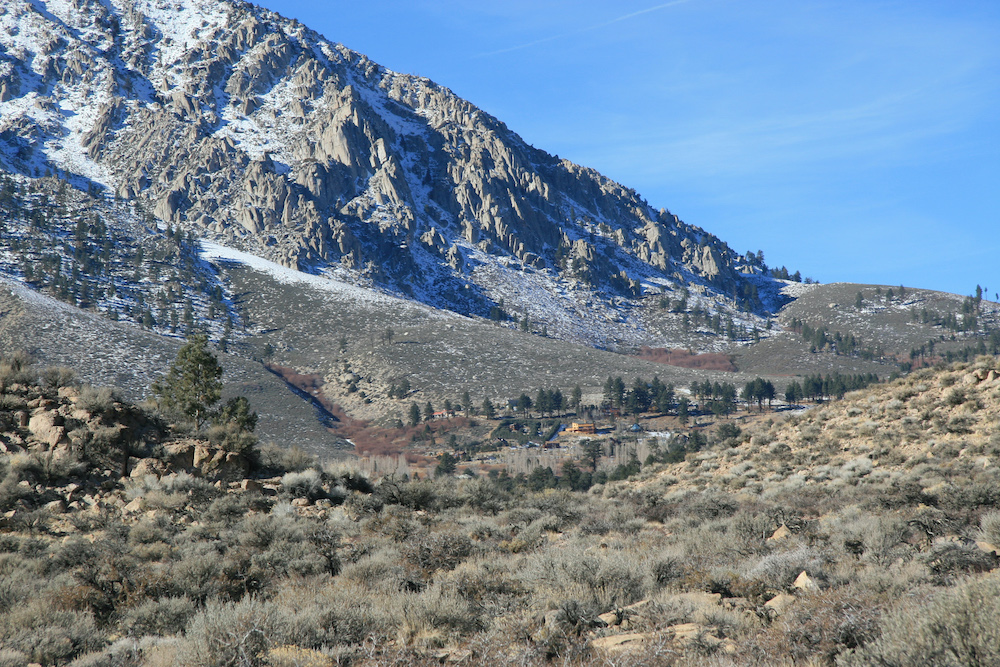 Swall Meadows, California, in 2007. Kendra Atleework begins her memoir, Miracle Country, with the 2015 fire that decimated her 200-person hometown, which is located north of Bishop. Courtesy of Wikimedia Commons.

How will Californians ever recover from this year of apocalypse and conflict, of pandemic and fire, when landscapes and lives were broken, seemingly forever? Where can we find a miracle?

Miracle Country is the title of Kendra Atleework’s new and magical memoir about her life in the Eastern Sierra. The book begins with the 2015 fire that decimated her 200-person hometown, Swall Meadows, north of Bishop and 7,000 feet above sea level (“marking the border between desert and sky”). And it is full of unforgettable stories about how disaster shaped and reshaped the Eastern Sierra broadly, and the Owens Valley in particular.

Atleework, in prose as beautiful as any writing ever devoted to our state, shows that fire and disaster aren’t the end. Apocalyptic events, in her telling, are really beginnings that can ground us, protect us, and even nurture us. Her oft-devastated home region, on California’s eastern edge, offers a preview of a post-apocalyptic life full of great beauty, deep meaning, and engrossing mysteries.

“I wondered what it meant to go to smoke,” she writes of the aftermath of that fire in Swall Meadows. “This land demands that you consider—makes you think you’ll find an answer, but you never can. And where do we turn after everything burns? What light do we find, or not find, just over the summit?”

Atleework’s life, and book, toggle between Swall Meadows, where she was raised, and Bishop, where she lives now. Bishop (population 4,000 in the city), is the only incorporated place in Inyo County, which covers an area larger than New Jersey. But her true subject is the high desert that is the Owens Valley, in her words “a long brown sliver of sagebrush and bitterbrush cupped between ranges—to the west, the stark granite escarpment of the Sierra Nevada, casting its rain shadow across our towns; to the east, the Whites and Inyos, those ancient desert mountains.”

She weaves stories of her family’s life navigating the Eastern Sierra’s climate extremes (from the dry valley up to snowbound Mammoth) with its two great apocalypses. The first was the taking of the region from its first indigenous inhabitants, the Paiutes, who called the valley “Payahuunadü” or land of flowing water. The second was the taking of that water, through the deceptions of William Mulholland, to serve Los Angeles, leaving Owens Valley and its 25,000 people with a dry lake bed of arsenic and mining chemicals that produces some of the world’s most hazardous dust storms.

Most accounts of the Owens Valley start and end with that crime and its resulting, ongoing legal fights. But Atleework, while unforgiving of the water theft (as a young adult in L.A., she counts the private swimming pools on Mulholland Drive and seeks out Mulholland’s grave at Forest Lawn), is more interested in appreciating the wonders of the valley left behind. “When the water went away, growth occurred someplace else,” she writes. “With water, Owens Valley might not be the country that drew my parents together for love of its strangeness.”

She appreciates the hiking and beauty of the mountains, but also the absence of people and enterprises—the kind of emptiness that is rare in California. She frequently quotes turn-of-the-century novelist and homesteader Mary Austin, who lived in the Valley and found it “forsaken of most things but beauty and madness and death and God.” Atleework even conveys an affection for the fires, droughts, floods, volcano-inspired earthquakes, and blizzards that often visit the Eastern Sierra, and have taught its people that this world is full of giant forces “from which we cannot protect ourselves or each other.” The best you can do is hold on tight to the nearby rocks.

“To be made careful is to be made grateful,” she writes. “Loss highlights all you have, just as absence in the desert highlights presence, until what little water we harbor glows.”

The most memorable character of this story, other than Atleework’s pilot-father and her late educator-mother, is a wind, the Sierra Wave, which gusts above 60 miles an hour and routinely knocks over big-rigs and pushes airplanes into mountains. Reading Miracle Country’s description of California as “this windy place that seems to be on fire half the time” felt fitting these past few weeks.

“On the beaches of the Pacific, gusts arrive laden with salt spray, whooshing with enough force to make your eyes water, a persistence perfect for launching kites,” Atleework writes of this wind that connects California. “By the time that breeze reaches Owens Valley, it has raced over the coastal range, up the western, windward flank of the Sierra Nevada, and it has turned powerful.”

While hiking, Atleework leans “into a gale so strong it negates the work of gravity and I can almost lie down on air.” So strong that the wind might be proof of the divine. “If God is ever present, if God can get in through the frames of our doors and the pores in our skin,” she writes, “then on this obsidian edge of California, God is the wind and the dust it carries.”

Looking down on our state from on-high, Atleework, now 31, zeroes in on its central paradox: “California is strange country, country of dearth—go there now, to almost any town or city, and find not enough water, of course, but also not enough jobs, not enough housing, not enough room in the jails and schools—yet California is known the world over as a place of excess in lifestyles, ideas, and dreams.”

She also has glimpsed its future, since climate change has shadowed her whole life, with the Eastern Sierra’s winters growing warmer, its fires bigger, its seasons more alike. As California lives through new apocalypse after new apocalypse, we’ll have to learn to go on and rebuild, as the Eastern Sierra already has, over and over.

Despite all the disasters, Atleework, after stints in Minnesota and Old Town San Diego, returns to the Eastern Sierra, and buys a house in Bishop. For all her fear of fire, she will keep wandering into the dry brush. The past, she concludes, has not entirely poisoned the future.

“Some who love this valley remember its first name: the land of flowing waters. Now we see it washed in fire,” she writes near the end of a book that might be the only truly wonderful thing about 2020. “We live in a landscape damaged beyond repair, and we see our loss magnified the world over. We are here regardless, learning how to keep an eye on mystery and miracle, where they flicker beside disaster.”