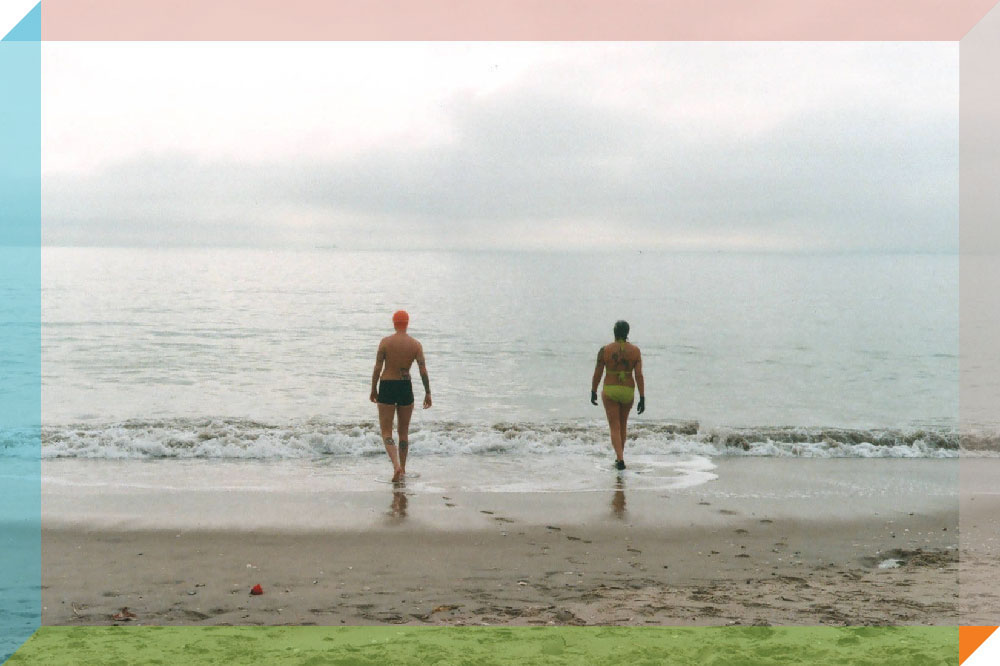 I’m alone in my Brooklyn apartment on a Friday night, and I’ve decided I don’t want to live anymore. It’s November 2019, and it’s the third time this year I’ve arrived at this dead-end; maybe the third time’s the charm. I can’t stop crying. I don’t do drugs but wish I did. I haven’t had a drink in two years, but the memory of single malt scotch plays on repeat. I’m fluent in the use of various weapons but have no guns, just a drawer filled with sharp culinary knives and an active imagination.

Please pray for me. I’m in more pain than I can handle. I don’t know if I’m gonna make it.

Making mental health confessions online is a risk, especially when you’re a woman, and brown. I expect nothing, but the responses come in fast. I wonder why all of these people with spouses and children and careers and weekend plans are on Facebook on a Friday at 10 p.m.

You’ve got this.
I’ve been there.
Sending love. Three pink hearts.

Thoughts and prayers are abundant tonight, and I turn away from my laptop before someone can tell me, This too shall pass.

It takes several calls from a police officer friend, a bear-sized swimmer with a wife and young daughter, who refuses my No, I don’t want to bother you and just shows up at my door for an intervention and a ride to the emergency room.

At 4 a.m., anti-depressants and anti-anxiety meds in hand, he and I return from the hospital to Brighton Beach. We head straight to the boardwalk overlooking the Atlantic Ocean.

The wind whips at our faces. I am freezing, and spent. There is no hope.

But there is the sea.

Several summers before, I began swimming with the Coney Island Brighton Beach Open Water Swimmers, a ragtag group of elites and amateurs in various stages of midlife crisis and recovery. But it took until that wretched winter of waiting out my misery for me to finally join them in the cold season. As the sun set too early and rose too late, I let the frigid water shake me out of my suffering, beyond misery and inertia, beyond me.

It requires a certain kind of madness to strip out of winter clothing into a bikini and bare feet on the cold sand. There are no wetsuits here, and no lifeguards. To confront the chill, I wear suits in neon colors, like Sunkist orange and key lime green. Two crimson red silicone caps stretch over my scalp, forehead, and ears, which are plugged with wax, making me look like a skull-sucking sea creature. Cold water neutralizes age and gender. I have body dysmorphia, like most American women, and it normally takes me a while to get comfortable baring my belly. But vanity serves no purpose here. As the winter grinds on and the water temperature drops below 45 degrees, I add a neoprene cap, gloves, and synthetic booties to the mix—the latter at the urging of my 59-year-old friend who explains they will protect my feet when they’re too numb to feel shells cutting into them.

There is little organization among the five or ten of us who show up on weekends, bundled in snow gear. The city prohibits ocean swimming once beaches are officially closed for Labor Day. Each of us is out for herself, though we keep eyes on the bright caps in the water, just in case someone needs to call an ambulance.

It helps that my compatriots, like me, are a bunch of compassionate lunatics, oddballs, and survivors: Sil beat prostate cancer. Capri just had her guts re-sected. Bob was an alcoholic, though he hardly ever talks about it. Sharon converted to Judaism in her forties. Jane’s daughter, Leonora, was killed by a drunk driver. Everyone’s got something to face down, to reckon with, to confess or cry to the water. 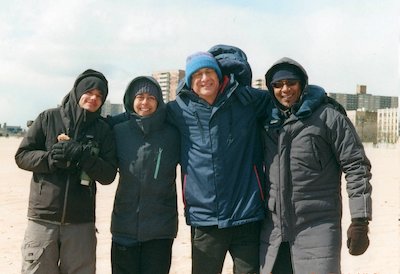 On this Sunday, while most New Yorkers are still under blankets in bed, I walk past Russian families looking on in disbelief, dodging broken bottles and mustering toward the waves like a naked fighter: shoulders back, chest open, wide steps. You don’t face the elements with your head down unless you want to lose. The first step is nothing; 42-degree water feels like relief when it’s 20 degrees outside and the wind is whipping against you. But with another step, the skin around my ankles protests.

What no one tells you about swimming in the ocean during this bleak season is that the cold burns. It is made of blades. It stings, and cuts. The air bites like a hungry wolf, and on windy days like this one, sand roars from sea to shore, whips into the skin, lashes at eyes and fills goggles. I’ve never been more thankful for the few extra pounds around my midriff and thighs: Skinny doesn’t survive long here. The core is the only thing that remains warm in the water, and even then, not for very long.

But there is a place beyond the burn. I have to want to get there so badly that I keep going. The muscles and fat on my thighs take to the cold better than my bony heels. But the soft space between my legs cringes as I walk forward, my belly sharply contracts, and my collarbones leap upward trying to keep my breasts, lungs and heart from being submerged. I gasp but try not to scream because it will only remind me of how much I hurt. Instead I lean into the surging sea the way a soldier compels her body toward bullets, until my chest and collarbones are underwater and the only thing left above the surface is my head.

On this Sunday, while most New Yorkers are still under blankets in bed, I walk past Russian families looking on in disbelief, dodging broken bottles and mustering toward the waves like a naked fighter: shoulders back, chest open, wide steps.

If there is really a me, that thing which suffers more than I can bear, it is this stubborn organ inside my skull, with its endless thoughts and feelings. I try to short-circuit its activity with each shallow breath I take. Too often, my brain has let me down. Failed neurotransmitters. Dysfunctional serotonin. Frazzled nerves. Fighting, fleeing, and freezing on over drive.

When I attempt to pull my face below the surface of the ocean, my brain rebels once more. No, not a chance in hell. Get me out of here.

Frustrated, I try again, gently, to override it. My face is all pins and needles, ice picks stabbing my cheeks and forehead and chin. I have never been so conscious of my body and all of its exposed pieces. Each responds. Each cries out for attention. Each is alive, or acts as though it wants to be.

I know I must move in order to generate enough heat to survive the cold. Straining my neck and upper back, I breast stroke with my head above water. My chest is trying to shrink. My toes and fingers are wailing for blood. My body wants to shut down.

Let it throw its tantrum. I command myself to breathe. Deeply, slowly, I do.

Finally, I plunge my face in the water, and I reach, elbow high, stroking, one, two, three, west toward empty rollercoasters, the Wonder Wheel, and hot dog stands that will remain closed for many months to come. I turn my face to the right for a breath, and see a stretch of old buildings and the expanse of sky over my body.

Being fearless is not an option. Testing my limits and ego, one January swim I stay in one minute more, and then another. When my feet step on sand again, they feel like they are on fire. It’s not pins-and-needles as much as full-on arson.

My friend Hsi-Ling, the resident kung fu expert, silently watches me exit the sea and approach my towel. My speech comes out slurred, as if the words have congealed.

I must look terrified. Hsi-Ling says, calmly, “Put your socks on.”

Over the next several weeks, as the ocean temperature descends toward freezing, my post-swim routine becomes crucial. Every few seconds of wasted energy means the loss of vital body heat, and a rapid, imperceptible slide toward hypothermia.

As it turns out, I do not want to die.

I trip toward land, dripping salt water and shedding my gear as I go, clutching caps and goggles in my hand extra hard, so I do not lose them as I shiver. To avoid falling over, I sit down on my towel and start from the bottom; thick socks matter most, followed by long underwear (panties are unnecessary for survival), then another layer of pants. Nothing with buttons, or zippers, if I can help it. Boots that slip on.

It’s not graceful. It’s a mess of trying to stay still while gripping fabric in the nubs of my hands, punching fists and kicking soles where I think there are sleeves and pantlegs. All of my limbs are vibrating. Sand sticks to exposed areas and forms a thick, itchy layer between my skin and my clothing. With my lower half concealed from the wind, I tug at the knot and remove my wet bikini top with a flourish, exposing my breasts without caring who sees. Water drips down my spine. I don as many shirts and sweatshirts as can fit beneath my jacket, force my numb stumps after several tries into mittens, and cover my icy wet head in a hat and hood. A thermos of hot ginger tea tastes like manna, but it is never enough. The ocean has worked her way down to my bones, and my body needs to fast-track warmth.

Hsi-Ling has taught me to high kick like a communist soldier in parade formation—which, because I am no Rockette, takes almost as much energy as burning through the water. When I tire of doing them, I jog where the water meets the sand. My lungs feel as though they are being stepped on by a steel plate. But my knees, still numb, relish the movement without pain. I run around a group of shivering swimmers, and can’t help giggling, knowing I look like a crazed Pillsbury Doughboy in all of my layers, barely able to shuffle my arms up and down. When the cold persists, I drop to the sand for push-ups. When that is not enough, I attempt burpees.

It takes an hour of this calisthenic circus for the iciness to thaw from my core and limbs, though the freeze stays in my toes, my belly, my nipples, for several hours.

When I finally take the subway back home, huddled and dozing in a corner of the train, I am blissful. Serene.

I encounter my cranky old father as I dump my sandy backpack on the floor of my apartment. He wants to ask me why I do such crazy things.

He expects me to protest but my gentle smile disarms his lecture, and he attempts one as well.

A hot shower feels too luxurious. I keep it lukewarm, and short.

I fall asleep hard with sand still in my hair, without dreams, or nightmares.