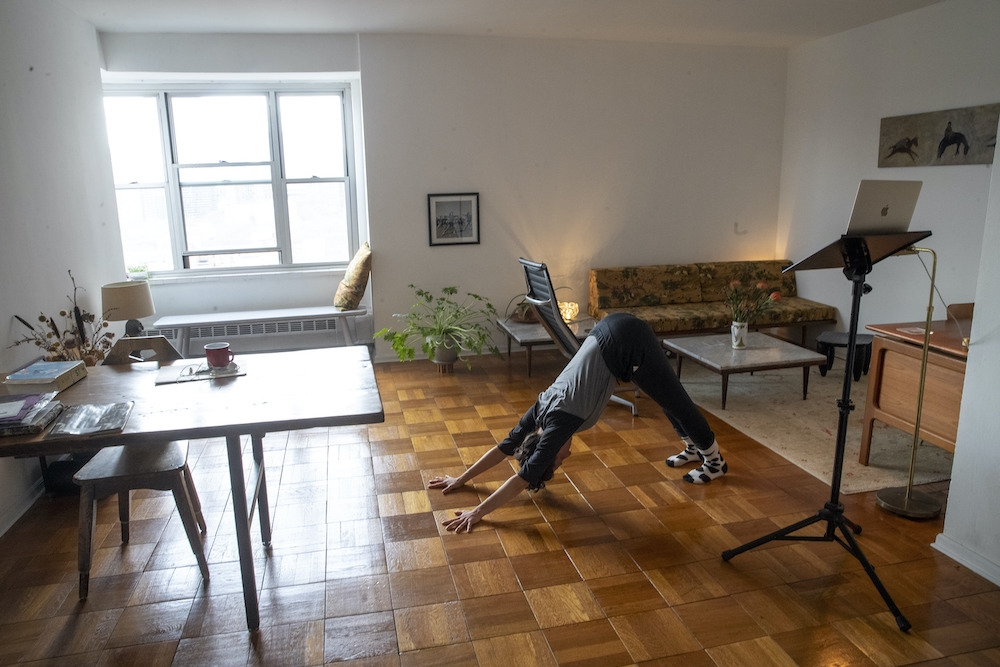 Some of the adjustments that we’re making to keep life safe during COVID-19 are going to stick with us even after the pandemic has waned. Courtesy of Mary Altaffer/Associated Press.

Those of us who have lived through the COVID-19 pandemic will almost certainly never forget it. Like my father-in-law who lived through the Depression and could never bear to use a paper towel only once; or my friend Anna who survived the 1941 siege of Moscow and armed herself for decades afterward with stocks of soap and salt, we pandemic people will probably always buy extra rolls of toilet paper. We’ll be comfortable wearing masks. We may even keep baking sourdough bread.

But as we slog through what will clearly now be months, or even years, of this pandemic, it’s intriguing to consider how it will have shaped us by the time our lives bounce back to normal, or even how that eventual new-normal will be different from what we left behind. What will we take with us into a post-COVID world? And what will be forever left behind?

We know that other seismic moments reshaped the world they erupted upon. When the Agricultural Revolution swept across the plains of Asia and North Africa sometime around 8000 B.C.E. it upended hunting and gathering traditions that had marked humankind for millennia. Villages, and then cities, were created by the evolving patterns of settled agriculture. So were governments, taxes, and the practice of monogamous marriage. Likewise, when the Industrial Revolution shook the world in the 18th and 19th centuries, its effects spread far beyond the steam-driven factories and railroads that were constructed in its wake. As men, overwhelmingly, became the factory workers and women stayed home, relationships between husbands and wives solidified into what we now think of as the traditional breadwinner-and-homemaker model. Relationships between workers changed, too, as the relative autonomy of agricultural life gave way to the assembly lines and harsh discipline of the factory floor. Even family structures evolved to meet the changing times: Children spent more years in school instead of working the fields; young people left their ancestral villages in search of further-flung opportunities; and extended families gave way to smaller and more nuclear units.

Most of these earlier shifts occurred over relatively long stretches of time. Ours is exploding in the blink of a digital eye. If we go back to the ancient days of, say, 2019—a time when COVID was still a meaningless acronym—most people would likely have agreed that humanity was already in the early throes of another massive technological revolution. Digital media, artificial intelligence, assisted reproduction—all were poised to upend business practices and social structures. Now the pandemic has further accelerated these shifts, crashing us into a future that is simultaneously as radical and mundane as our endless meetings on Zoom.

Already—in just six months—the imprint of this moment is becoming clear. Economically, we are floundering, with unemployment rates in the United States holding at 7.9 percent in September (up from 4.4 percent in March) and millions of small businesses—restaurants, bars, gyms, and nail salons—shuttered for good. Some of these may recover once COVID leaves. Most will not. Societally, we are reeling from the knowledge that this disease has struck unevenly, falling with a particular vengeance on the elderly, on Blacks, on Latinx populations and on those with no option but to work at high-risk, in-person jobs. The scars of these inequities will not be quickly or easily erased. Calls for social justice amplified by the pandemic are likely to mark and define our political system for a long time to come.

Meanwhile, subtler changes are also afoot. Within the earliest days of COVID-19, entire structures of work, education, and leisure shifted from the physical world to its virtual incarnation. We moved millions of students—from toddlers in pre-school to medical students completing their clinical rotations—out of classrooms and onto digital learning platforms. We shuttered office buildings around the world and told businesspeople—bankers, architects, therapists, lawyers—to do their jobs, suddenly, from home. We upended thousands of interactions that had always been in person and compelled them to find some way of migrating online, from religious services to fitness classes. And everyone bought everything on Amazon. (Between March and September of 2020, Amazon’s stock price rose from $1,883 to $3,449, and the company’s market capitalization increased by 85 percent.)

We are crying on Zoom. We are dating on Zoom. And it’s hard to imagine that we will ever go back.

For a while it seemed these changes would be temporary. We presumed, naively in retrospect, that we would be back in business within weeks, or at least months. We anticipated re-scheduling postponed weddings; re-booking summer flights. But now, more than six months into what feels like forever, it is becoming increasingly clear that our future will be fundamentally different from our past.

To begin with, the nature and structure of work have already been profoundly transformed. From the outset, COVID drew harsh distinctions between those who could work remotely and those whose work demanded a physical presence. Grocery clerks, bus drivers, meatpacking plant employees, obstetricians—some workers’ lives became instantly more hazardous and (momentarily, at least) heroic. Over time, some of these workers may be able to command a higher wage for their labors. More of them are likely to be automated away. Delivery drones, driverless cars, automated checkout kiosks—all these developments were well underway before the pandemic. Their adoption now will almost certainly be accelerated. Meanwhile, anyone who can work remotely is liable to keep doing so, both because employers are rapidly realizing the benefits of reducing the costs of their physical operations and because employees are growing accustomed to commuting to their dining rooms and working in slippers.

Of course, not everyone will stay at home. Some people will miss the camaraderie of the office, or will chafe at having to squeeze another workstation into an already-crowded apartment. Some will be needed to maintain scaled-back operations, or to conduct particular bits of business in person. But working from home will increasingly become the norm, and the entire infrastructure built to support a work-from-the-office environment will become gradually obsolete. Things like subways and coffee shops, which presume an active urban work force, will decline. Highways could become less crowded. And rural areas—like tiny Winhall, Vermont, whose summer 2020 population rose from 769 to more than 10,000—are likely to see an upsurge in home sales.

A second shift comes from the more intimate ways in which the pandemic has rejiggered our lives. Nine months ago, most of us could not have imagined talking to a therapist over Zoom, much less attending a Zoom wedding or funeral. Most of us probably didn’t even know, or care, what Zoom was. Now it has become the central utility of our days, the channel through which we teach our children, drink with our friends, and check in on our aging parents. We are crying on Zoom. We are dating on Zoom. And it’s hard to imagine that we will ever go back—not because Zoom is so wonderful. It’s not. But because we will get used to slipping in and out of conversations at the click of a mouse, to attending meetings around the world without having to wait at the airport or pay for a flight. We’ll grow accustomed to knowing people only from the neck up, and to linking eyes across a digital screen. Yes, we will use Zoom to maintain contact with our friends around the world, but we will also build new friendships, real friendships, with people whom we’ve never met in real life. Which means that our very notion of “real” will begin to morph as well.

Before COVID-19, most of us drew sharp distinctions between our on- and off-screen lives. On-screen time was for work, for communication, for the parade of social media apps that zapped us with progressive doses of dopamine. Real life was lived in the physical world, where we worked out and worshipped, went to class, went shopping, hung out with friends and family, held hands. Now it’s all blurred. There is an entire class of kindergarteners who have started school online. For them and those who follow, Zoom classes won’t be “Zoom classes.” They’ll just be school. And the rest of us will gradually become more accustomed to seeing our screen lives as our real lives, and to thinking of physical interaction as something different. Something rarer. Something saved for special occasions, like a trip across the ocean once was for our parents and grandparents.

Finally, in the wake of COVID we could well find that our daily lives have returned in some strange ways to patterns that existed long ago. Before the Industrial Revolution unleashed its radical tools, most people’s lives unfolded along relatively narrow arcs. They lived close to their extended families, and usually in the same town or village as their parents and grandparents. They produced their own food, made their own clothes, and had few ways of demarcating “work” from “home.” Indeed, before the Industrial Revolution created what would become the modern factory economy, everyone essentially worked from home—much as, under very different circumstances, millions of workers have learned to do today. Yes, of course, there are massive differences, from the technology to the take-out. But for now at least, and perhaps for a while, we are living more like our ancestors than like our former selves, merging the boundaries between home and work, and between our personal and professional lives. Perhaps we will run back to the office, the restaurants, the movie theaters, the soccer stadiums, and the nail salons as soon as we possibly can. But early data suggest not. As of September 2020, only 54 percent of major employers in New York City were expecting to bring their workers back to the office by July 2021.

It is too soon, of course, to know the precise contours of COVID’s long-term impact. What is increasingly evident, though, is that this disease will reshape us in ways that extend far beyond its deadly toll. The biggest change, is likely to stem from the nature of change itself. We have known for some time that technology is racing faster and faster, and extending its reach across an increasingly broad swath of our lives. Social media, smart phones, nanobots, artificial intelligence—all have emerged in just the past 10 years, a tiny sliver of time. But until the pandemic came, individuals had some ability to pick and choose among the technologies they used. They could explore virtual realities or not; venture into an online classroom or stay firmly ensconced in the physical world. Now, COVID has abruptly yanked everyone into the future. We are all online now, and likely to stay there for a very long time.

It’s exhausting, this sudden shift. It’s scary and isolating and exhilarating, all at the same time. As we tumble through this Alice in Wonderland experience, though, it’s also useful to remember that technological change and disaster have long gone hand-in-hand, with outcomes that have generally, eventually, proven less than calamitous. As a species we are surprisingly adaptive, reconfiguring our norms and social structures to accord with our particular moment in time. We will be different after COVID-19 finally leaves. We will be ever more reliant on the machines that we have built, and increasingly settled into patterns of work and life and love that look different from those that existed before. But we will get used to this new normal with amazing speed, and then quickly forget that it was just one little virus that brought our future into being.