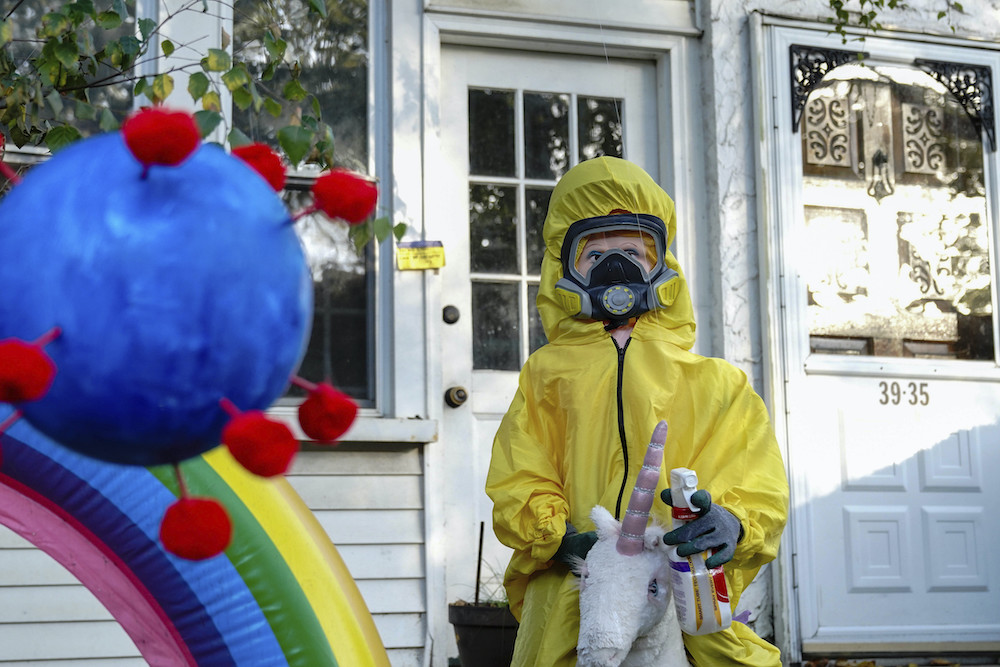 Take it from an evolutionary biologist: This Halloween, we need to embrace our fears. Courtesy of John Nacion/Associated Press.

It’s Halloween, the season when we go out and try to spook each other—at least in normal years. Indeed, fears of contracting and spreading the novel coronavirus have drastically impacted many of our Halloween plans. Should they? And more importantly, how do our fears impact our behavior to make us safe? I’m a biologist who studies animal behavior—including what scares creatures ranging from giant clams and other immobile marine invertebrates to a variety of birds and mammals, and why. Animals’ responses to frightening things—reactions that have helped species survive over millions of years—can help explain our own reactions to this global pandemic, and may suggest the best path for us to follow in these uncertain times.

Because animals face predatory risks that can’t be fully eliminated, it’s essential that they learn to live with fear, and develop strategies to respond correctly. Overcompensate, you miss out on resources and may starve. Undercompensate, a predator abruptly ends your life. For instance, the animals I study—marmots—flee to the safety of their burrows when a coyote is around. But how long should they remain hidden away, unable to find food? Life is about managing tradeoffs. So when does, and how should, fear motivate change?

In humans, fear motivates change best when the threat is simple to understand, actions have a direct impact on the outcome, and the potential outcome is viscerally repulsive; disgust is a powerful motivator. Consider public health officials’ campaigns against methamphetamine abuse in the early 2000s. Because meth is so highly addictive, informational campaigns had limited success. Enter Tom Siebel, a software millionaire on a mission with a brilliant idea: Instead of peppering users with statistics, show them pictures of “meth-mouth,” the severe dental decay associated with meth abuse. Starting in 2005, Siebel paid for highway billboards in Montana that showed close-ups of a woman’s face with rotten teeth with text that read: “YOU’LL NEVER WORRY ABOUT LIPSTICK ON YOUR TEETH AGAIN.” He continued his fear- and disgust-driven campaign with a series of short television and internet commercials that showed unsuspecting users their horrible futures. The campaign worked. High school meth use went down 45 percent in two years, compared to an average of just 7.8 percent annually previously.

Fear most successfully leads to immediate responses. It doesn’t work as an agent of change over longer periods, because animals habituate—they stop responding to non-threatening stimuli over time. Indeed, designing habituation-proof stimuli to scare away “problem animals” and reduce human-wildlife conflict is a compelling challenge. The plastic owl above the outdoor urban park dining area works at deterring pigeon traffic for a just few days before the birds realize it’s harmless and start appreciating its utility as an object that helps protect them from the wind. People tend to tune out, too. In the aftermath of 9/11, the Department of Homeland Security began estimating terrorism threat levels and communicating them to the American public. The color-coded system reported elevated red or orange levels of risk over an extended period of months. An analysis I did showed that the unchanging high threat levels produced the opposite of the desired response—people stopped seeking out information on how to prepare for terrorist threats. Americans habituated to the government’s warnings. We’re experiencing habituation to warnings about coronavirus threats now.

There are other costs to maintaining a fearful state for too long. For snowshoe hares, the mere exposure to predators, or predatory cues, can increase production of stress hormones and shift individuals into “survival” mode, directing energy away from growth and reproduction and toward defense. Snowshoe hare populations increase and decrease over time, driven by the population of their main predator, the lynx. As lynx populations increase, hare populations decrease until there are not enough hares to feed the lynx, resulting in a dramatic crash of the lynx population and a rebound for the hares. Researchers have found that hares have higher stress hormone levels at the peak of the lynx population cycle. In another study, the mere proximity of a dog walking by an enclosure containing pregnant female hares resulted in higher stress hormone levels in the dams and their offspring. Importantly, stressed dams produced fewer offspring. In a follow-up study, researchers found that the effects of stress hormones on reproductive success persisted through generations: The offspring of stressed mothers themselves were relatively more stressed and had fewer babies.

In humans, fear motivates change best when the threat is simple to understand, actions have a direct impact on the outcome, and the potential outcome is viscerally repulsive; disgust is a powerful motivator.

Complex problems are, in part, so defined because causality isn’t obvious. Solving complex problems requires something more than the simple, direct, fear-based motivators we see in the animal world. This is certainly true of the pandemic. As we learn more about it, we may think we are better able to manage the risks we’re exposed to. To some extent we are. The risk of transmission and infection is reduced by wearing masks, physically distancing, and minimizing time spent in closed spaces with others. However, none of these actions totally eliminates the risk of getting infected—which makes giving up on any one of them very tempting.

When passive restraint systems like airbags in cars were first introduced, some people stopped putting on their seat belts because they assumed that they would be safe. In reality, it takes both tools together to increase your odds of surviving a bad accident by keeping you in the car, where you typically are safer. Studies of taxi drivers showed that they drove faster on wet surfaces when antilock brakes were first introduced because they could do so and still arrive reasonably safely, shaving precious driving minutes off each ride. However, driving faster on wet streets, even with anti-lock brake technology, is never a great idea: There was no net reduction in car accidents.

Marmots vary in how fast they can run away from threats. It turns out that marmots who are slower than average spend relatively less time looking around when they are foraging. By doing so they reduce the time they are away from the safety of their burrows, thus compensating for risk. But another way to view this variation is that animals who are better able to escape spend more time looking around while foraging and thus increase their exposure to risk. Perhaps marmots, like taxi drivers, accept a certain level of risk when the possibility of reward beckons.

At a very immediate level, our sadness at losing the chance to scare one another this Halloween could reflect our belief that we are in control of our risk of infection. And this has important insights for our response to a global pandemic. Responding to the pandemic is a marathon, not a sprint. It will require constant vigilance and behavioral changes for more than the foreseeable future. As new drugs and vaccines are introduced, we should be extra vigilant of our perceived safety. Risks are cumulative, and the more you accept, the greater the likelihood that they will eventually catch up to you. Tragically, this was a message illustrated by the recent outbreak in the White House, and at a macro level, by the recent spikes we are seeing worldwide. Protective measures that increase our perceptions of safety (in the White House’s case, rapid testing and everywhere else, the success of social distancing in the summer months) encourage us to take more risks and are thus, counterintuitively, risky.

Some people view the warnings about coronavirus as the boy who cried wolf. After all, they themselves have not gotten sick, and most people who get COVID-19 don’t die. But this is the wrong way to interpret what we see around us. We all have different risks based on what we do, various pre-existing conditions, and our age. According to the CDC, if infected, I am at least four times more likely to be hospitalized and 30 times more likely to die than most of the undergraduates I teach. We know many people experience longer-lasting negative health effects from the virus. I also know that it’s not just my health at stake but also the health of others who may have even higher mortality risks. Taken together, this leads me to think that all of us—my students and myself included—are morally obligated to continue to take the coronavirus threat seriously.

Halloween illustrates the joy associated with celebrating our fears by allowing us to express one of our most primordial emotions. When we do so, we should embrace our fears and remember that we are descended from a long line of successful ancestors, dating back millions of years, who got their risk assessments right. They neither over-reacted, nor under-reacted to environmental threats; they figured out how to successfully live with them. I suggest that this Halloween we commit to making multimedia costumes that can scare, via Zoom, from afar. Meanwhile, let’s look forward to a time, hopefully not too far in the future, where we are surrounded, in person, with scary costumes, boos, and screams of both fear and joy.