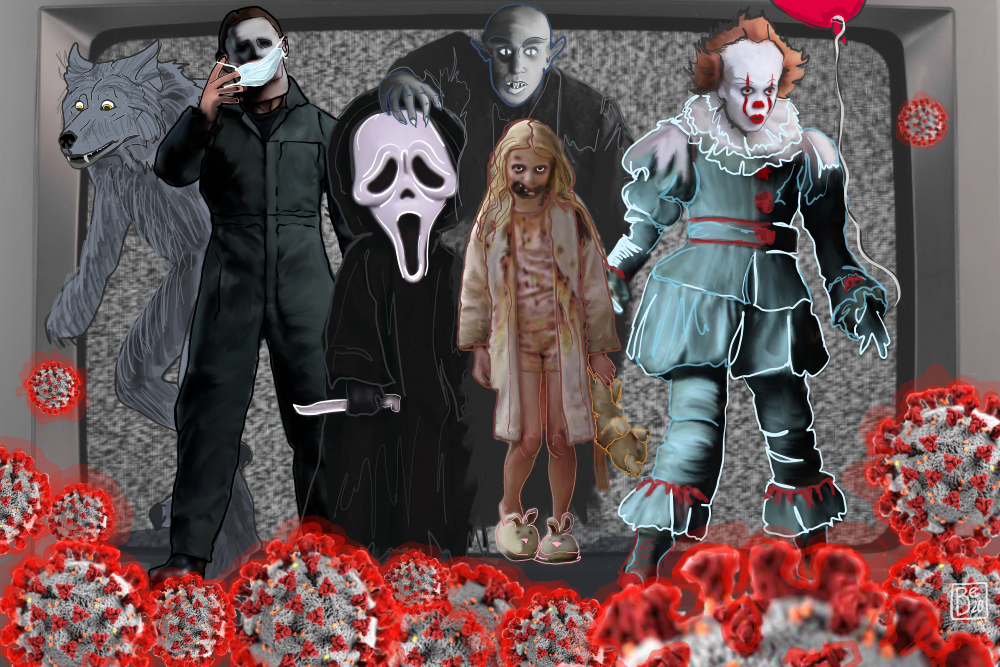 You know it’s been a bad year when making a “Masque of the Red Death” reference this Halloween season seems banal and obvious. What use is there for the genre of horror when the morning’s glance at our news feed can turn into a vicious mental spiral? When the White House seems to have become America’s haunted house? The contagion premise—which has provided uncountable zombie narratives since the 2002 premiere of Danny Boyle’s 28 Days Later—can seem downright ghoulish in the middle of a global pandemic.

On the other hand, horror seems an ideal forum to take on a world increasingly full of anti-immigrant rhetoric, authoritarian leaders, and a peculiar brand of billionaire populism that’s taken hold everywhere from Brazil, where Jair Bolsonaro has been christened “the Trump of the tropics,” to Viktor Orbán’s Hungary, where his party has dismantled the constitution. And it’s lurched from the shadows in the United States with President Trump’s chilling refusal to agree to a peaceful transfer of power.

So it’s not that surprising that some of the most interesting cultural work, in the U.S. and internationally, is emerging in the horror genre, which is ready to respond to the politics of wounded rage that propel the new authoritarians. Horror can directly address violence, employ rather sneaky satire, and force conversations about racism, classism, and the meaning of democracy in an era of vast chasms of social power. Audiences expect a horror film to rattle them, and they sometimes find their worldview taking a bumpy ride in the turbulence. But horror films have just as often served to legitimize the chaos on which right-wing populisms thrive. Audiences have left theaters or turned off their screens feeling the same sense of vertigo they get from the nightly news.

The roller coaster ride probably serves as the most frequent metaphor for a horror flick’s effect on us. While it’s true horror films may offer an adrenaline jolt, from their very beginnings they’ve also carried deeply political messages. The horror tradition of the 1920s, born largely from German Expressionism’s The Cabinet of Dr. Caligari and Nosferatu, engaged directly with the death toll and mental trauma of World War I.

Beginning in the 1960s, George Romero invented the modern zombie genre in a trilogy that successfully parodied American materialism, searingly castigated racism, and even portrayed the American army as dangerously predatory amid Reagan-era cinematic celebrations of testosterone-fueled military fantasies. Legendary horror directors John Carpenter and Larry Cohen made parables of American inequality and consumerism in cult classics like 1985’s The Stuff and 1988’s They Live. In a recent interview for a Shudder TV documentary, Carpenter explicitly said he made the film to satire the country’s “unrestrained capitalism.”

It’s the genre’s longstanding willingness to deal with the grotesqueries of our nightmares that gives writers and directors the chance to autopsy our current age of real-world horror—and capture it with frightening precision. As Victoria McCollum, the editor of Make America Hate Again: Trump-Era Horror and the Politics of Fear, puts it, horror has a “uniquely sensitive relationship to points of cultural tension and conflict.” McCollum, who is a professor of Cinematic Arts at the University of Ulster, told me she thinks of the years since 2016 as roiling with such political turmoil that audiences, and filmmakers, have naturally made connections between the nightmares on screen and in real life.

Some of the most interesting cultural work, in the U.S. and internationally, is emerging in the horror genre, which is ready to respond to the politics of wounded rage that propel the new authoritarians.

Over the past five years, a covey of American horror films has forced all manner of American attitudes down under a hot light for interrogation. Robert Eggers’s The VVitch, set in New England in 1630, proved to be less a period piece and more a feminist parable about the inherent silliness of male toxicity and the possibilities of liberation. Ari Aster jokingly called his terrifying Hereditary “a family drama,” but it uses a grandmother’s haunting and possession to tell a story of something rotting beneath the floorboards of upper-middle-class privilege and a supernatural question mark added to the American dream. And Jordan Peele’s 2019 Us may be the ultimate American statement about class and privilege in an era when the most vituperative nationalism also has a relationship to the vast growth in American, and global, wealth inequality. The entire story of a literally underground world of “the tethered”—soulless doppelgangers of regular Americans—works as a bleak metaphor for the pressures of class and the original sin of systemic racism. Some of the film’s most terrifying moments emerge when the sunny banalities of middle-class life are forcefully shattered by the tethered, unleashed by the American dream turned American nightmare.

Horror has long been able to critique the culture that produces it because, and not in spite of, the fact that it has not always been taken seriously. Horror films can play the bad kid in the back of the class, able to test the limits and mock authority in ways more reputable genres can’t manage. Of course, occasionally this also means that the creators of horror use their bumptious latitude to see how many sick jokes they can tell their audience before they laugh, become ill, or perhaps both. In the U.S., this has meant that the horror tradition sometimes drifts into political know-nothing-ism. Take the seventh season of Ryan Murphy’s long-running hit American Horror Story, which attempted to parody the era of Trump but became something more like a primary source that future historians can use to puzzle over the chaos and confusion of the era. The series features members of the alt-right dressing up as ghastly clowns and embarking on homicidal rampages. But the liberals, including the same-sex couple at the center of the season, are so triggered by the events of 2016 that they, well, dress up as clowns and go on homicidal rampages. The confused mess the season becomes leaves audiences with a message not too dissimilar from Trump’s infamous claim that “there were very fine people on both sides” after white supremacists descended on Charlottesville, Virginia, to face counter-protesters.

Horror, of course, is a global phenomenon, and the U.S. has neither a monopoly nor does the best work in the genre. Japan probably has become the best known for its tales of paranormal terror, both because of the inherent genius of films like Ringu and Ju-On and Hollywood’s propensity to remake them for American and global audiences. Nigeria, Mexico, France, and Australia are known for films that frighten while leaving audiences thoughtful as well as spooked. Take The Babadook, the 2014 Australian film by Jennifer Kent offers a meditation on loneliness and the meaning of monstrosity, as well as just being a real damn scary movie about motherhood. Indeed, it’s complex enough to achieve all this while becoming an important film (and a meme) for the LGBTQ+ community, with the monster as an outsider who wants to tell his story becoming a symbol and a costume for Pride Day celebrations across the country.

South Korean cinema, in particular, has long offered an impressive counterpoint to the idea that horror has to spiral into political nihilism. Park Ki-hyung, Bong Joon-ho, and Park Chan-wook are just a few examples of Korean filmmakers who have made horror socially relevant. Much of Korean horror, even older films, are particularly suited to our political moment.

South Korea has a decades-long history of repressive regimes bringing the country massive economic development at the expense of very basic civil liberties. Once the doors of censorship creaked open ever so slightly, horror made its death rattle heard in the political arena. Park’s 1998 Whispering Corridors is at once a ghost tale set at a strict boarding school with a potent subtext about the dangers of an authoritarian environment. Premiering in the aftermath of a national general strike and student protests against government repression and maleficence, its social commentary was hard to miss.

Bong’s Parasite has, of course, garnered the most international attention for using an increasingly horrific scenario to expose the social and psychological wounds of upper class wealth and working class immiseration on neo-liberal Korea. But it was his breakout film The Host, 14 years before his historic Oscar wins, that first showed Bong’s obsession with social class and its effects on marginalized people. The family at the center of the film barely hangs on to some sense of status at their tiny, riverside snack bar. And this implicit critique of Korea’s adoption of America’s free-wheeling economics is just the start. The film goes on to become one of the best “creature features” ever made, with references to the country’s efforts to create a participatory democracy and an American military base dumping the toxins that create an imaginatively terrifying monster.

The global renaissance of horror signals that we are all having bad dreams, or think we are living in one. To paraphrase the late Wes Craven, a master of horror for half a century: People don’t go to horror films to be frightened—they are already frightened, and the horror film restages their anxieties.

It is all the more complicated as audiences bring along different varieties of fears to sit beside them in the dark. Horror can produce a contemplative iconography of death, and the best of the genre points us to ponder the cruelties of human experience. Fear can also become incendiary, burning off a high-octane surge of inchoate rage. It’s a dangerous alchemy. But directors from Peele to Bong to Kent have become arcane masters of transmuting unseeable darkness into a bleak, but vibrant, midnight sun.