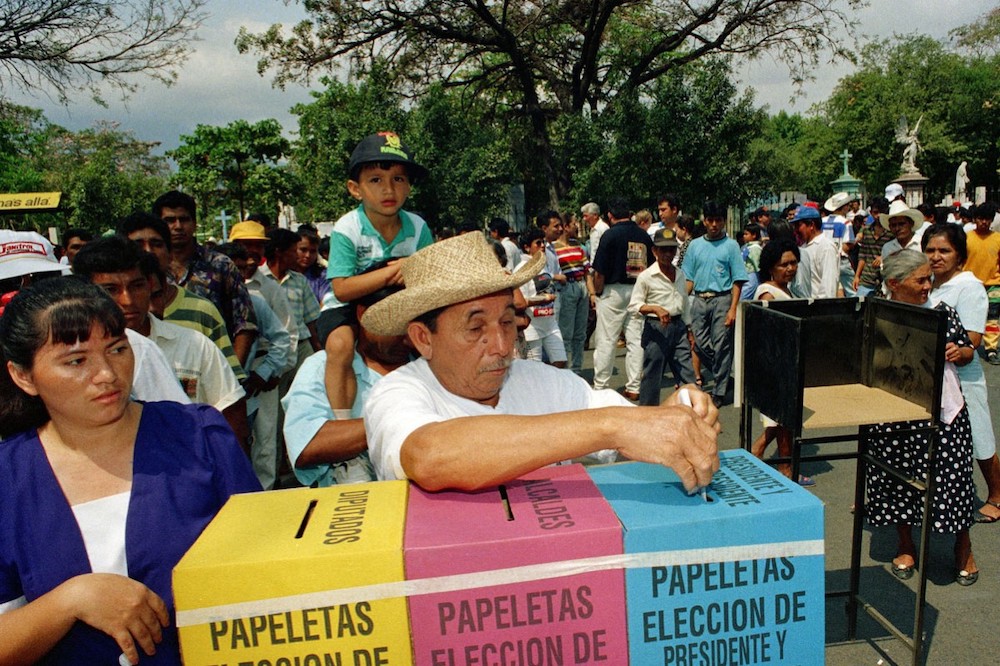 In downtown San Miguel, long lines of voters snaked around the block in the pre-dawn darkness. It was still an hour before the open-air election booths on the sidewalks lining Avenida Roosevelt, the city’s main thoroughfare, would open. Many had walked long distances to get to the city; some were barefoot. Many were unsure if they were listed accurately on the voting rolls. Many were illiterate and would be depending on the pictorial symbols representing the political parties.

It was March 1994, and after 12 years of bloody civil war that left more than 75,000 dead or disappeared, Salvadorans were heading to the polls for the first democratic election in a generation. The United Nations peace accord signed two years earlier mandated the election and the presence of international observers.

I was one of hundreds of them. I’d volunteered to travel to El Salvador from my home in California to share the expertise I had gained from working on voting rights at the ACLU.

The voters, most of whom had come to the city from far-flung country villages for the election, continued to wait patiently in line, even as the early sun drove the temperature up on the treeless street.

When a red Toyota pickup with smoked windows slowly drove down the middle of the dusty street, I watched the line collectively recoil as people instinctively withdrew from the curb.

The truck was the signature vehicle of the infamous death squads, who had wreaked terror on the Salvadoran countryside for more than a decade, targeting anyone associated with the revolutionary Farabundo Martí National Liberation Front, or FMLN, including peasant organizers, union members, and—as those in line clearly feared—poor people who dared to vote.

The courage and persistence of the voters I encountered in El Salvador reminded me of the fight for voting rights by African Americans during the Civil Rights movement. And the intimidation they faced recalled the threats, snarling dogs, raw display of armed power, and brutality against those who dared to exercise their right to vote that Americans long hoped we’d left far behind.

I hadn’t thought too much about that moment when the pickup truck cruised by a quarter century ago—until this month. Then I heard the U.S. president, during a nationally televised debate, urge white supremacist groups to “stand back and stand by,” and refuse to give guarantees about a peaceful transfer of power while warning of voter fraud.

And I heard his son’s call to action to supporters. “We need every able-bodied man and woman to join the Army for Trump’s election security operation,” said Donald Trump Jr. in a “defend your ballot” ad. “We need you to help us watch them.”

Those statements, with their implicit threat of violence upon voters, swiftly brought me back to El Salvador 26 years ago.

On our first morning in the capital, San Salvador, for training, a few of us walked to the market before collecting our United Nations Observer Mission in El Salvador (ONUSAL) credentials. We wandered the city streets, passing pastel-colored buildings pockmarked with bullet holes. We heard the cries of vendors hawking cheese, shoe polish, head bands, baby clothes, watches, cassette tapes, and T-shirts. The aftermath of a wartime economy.

A faint smell of smoke grew stronger as we approached the plaza. Shopkeepers swept up broken glass. The night before, the right-wing Nationalist Republican Alliance, or ARENA party, held a rally that ended in fistfights, a stabbing, and a fire. Strings of red, white, and blue flags waved limply across the park over a stack of smoldering tires.

At the market, I bought a pink straw hat. Everyone said San Miguel, where I’d be going to observe the elections, was the hottest place in El Salvador.

The credentialing center was at El Presidente, the fanciest hotel in San Salvador. The colonnaded building on top of a hill, surrounded by flame trees and magenta bougainvillea, was a stark contrast to the streets of the war-torn capital. Uniformed doormen greeted chauffeured cars delivering wealthy families with chubby, well-dressed children and huge carts of matching luggage. They were returning from Miami, New Orleans, and Los Angeles to vote.

As we waited in long lines for our credentials in the air-conditioned, marble-floored lobby, we chatted with international observers from Europe and Latin America. The ONUSAL rep instructed us to keep our credentials around our necks and visible at all times. They would identify and protect us.

The next day we attended a training at the Convent of San Jacinto on the outskirts of the capital. One wall was painted with a larger-than-life Christ breaking a rifle over his bended knee.

Our role on election day was to stand near the polling booths and create a visible presence so that the voters would feel safe; anyone who tried to menace voters would be deterred by the international observers. We were to take careful notes of any harassment or intimidation and report it to an official. We were not to approach anyone causing trouble or engage in any arguments. After being issued two bright blue shirts labeled Misión Observadora, we climbed into vans headed to our assigned spots.

Our role on election day was to stand near the polling booths and create a visible presence so that the voters would feel safe; anyone who tried to menace voters would be deterred by the international observers.

San Miguel is a three-hour ride from the capital. The guardrails and boulders along the Pan American Highway were covered with election signs and slogans: a white star on a red background for the FMLN; a cross in red, white, and blue for ARENA; a white fish on green for the Christian Democrats—and a smattering of other colors and initials denoting the multitude of smaller parties in the race.

As we approached the Rio Lempa, we passed the charred remains of a large concrete-and-steel bridge. Our driver crept cautiously across a temporary low-lying, wooden pontoon bridge. He explained that the guerrillas had blown up the old bridge a few years earlier to keep the Army from crossing.

San Miguel, then a city of 180,000, was surrounded by farming villages, cornfields, and sugar cane. Our small hotel sat across from a barracks that once housed 15,000 soldiers, who had been financed, equipped, and trained by the United States. The heat was intense, and everything smelled like insecticide—the supermarket, the inside of the van, even the drinking water. At our local orientation, a doctor reminded us to watch out for sunstroke, sunburn, and bites from scorpions, snakes, and bugs. The region had just suffered a cholera epidemic, and she cautioned us not to drink the water or eat shellfish.

Over the next few days, we met with representatives of each of the parties. It seemed that everyone in town—except for us, the “official observers”—knew that the head of the local ARENA party, Eduardo, was a leader of the death squads in San Miguel. Eduardo followed us around and hovered over meetings where he did not belong. No one told him to leave.

The day before the elections, I was asked to translate at a meeting with local representatives of the Tribunal Supremo Electoral (TSE), who were in charge of all the technical aspects of the electoral process. After five minutes or so, Eduardo sauntered in and sat down at a desk on the side of the small room. He wore a light blue polo shirt, a large gold cross around his neck, and a black leather fanny pack with the handle of a pistol clearly protruding. He lit up a Marlboro and fiddled idly with the phone; you could tell he wasn’t really using it. He wanted us all to know he was listening, especially to the local TSE workers’ answers to our questions.

As I translated, I heard myself start to stammer. I forgot the word for birth certificate, even though I’d used it 20 times in the past week. Fe de nacimiento, fe de Nacimiento, I repeated to myself as sweat dripped down my back.

Members of our delegation asked their prepared questions, and I continued struggling with words I should have known. Eduardo watched me. He watched the local delegates. I translated questions about ballot boxes, chairs, the ban on firearms and alcohol on election day. Inside I was panicking. He stayed in my line of sight.

Our guide had told us that, one day on his way to high school, he saw eight corpses on the street in San Miguel. How many was this man responsible for?

Eduardo finally got up, and as he left, he slapped one of the TSE officials on the back and whispered into his ear. I felt faint and desperate to get out of this dark, airless office.

By the time we concluded, I was trembling. With clammy palms, I shook hands with everyone. They seemed relieved that the meeting was over—whether it was because they had so much work to do before election day or, like me, were grateful to be out from under Eduardo’s watchful eye, I wasn’t sure.

That panicky feeling stayed with me the next morning as I watched thousands of Salvadorans line up to vote.

My dread abated somewhat as a steady stream of voters approached the polling booths without being harassed. Once the polls opened, Avenida Roosevelt was closed off, so no more vehicles could pass. Surly looking men in mirrored sunglasses occasionally strutted through the crowd, and though they sneered at us foreign observers, they kept their distance from the voters. Throughout the day we heard complaints of people’s names missing from the electoral lists, a shortage of ballots, sealed boxes of ballots being delivered already open to the TSE headquarters—irregularities that may have affected the outcome. But we witnessed no violence.

No presidential candidate received an absolute majority that day; in a second election held a month later, the ARENA party took power. Hearing the news back in the States, many of us were incredulous that a party associated with the death squads and other human rights abuses could have won the popular vote. The official U.N. report cited the irregularities: Hundreds of thousands of voters had been disenfranchised due to missing birth certificates or registration cards. The threat of violence was not the only obstacle the Salvadoran voters had faced.

These past few weeks I’ve watched footage of people all across the United States lining up to vote, with the president and his son’s warnings echoing in my ears alongside Eduardo’s presence while I translated in San Miguel.

The U.N. is not here, but organizations including the NAACP Legal Defense Fund, the ACLU, and the Lawyers’ Committee for Civil Rights are recruiting lawyers and poll watchers across the country.

Tens of thousands have volunteered.