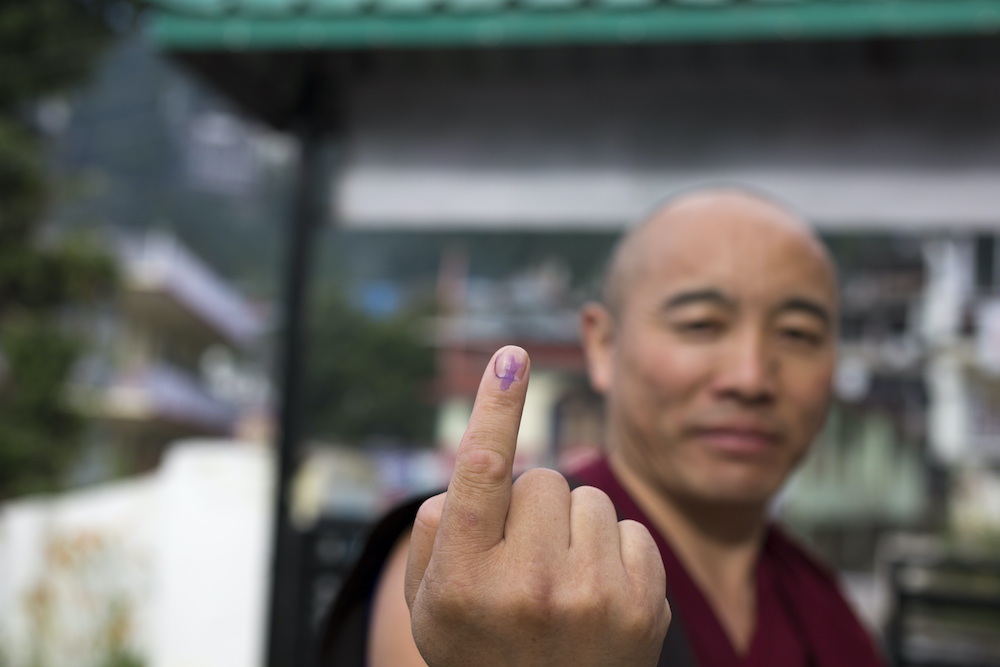 A voter showing off his election ink during the seventh and final phase of 2019 national elections in Dharamsala, India. The ink, used to prevent voter fraud, was first used during the 1962 Indian general election. Courtesy of Ashwini Bhatia/Associated Press.

Americans have long been accustomed to knowing the results of elections by the time they go to bed on Election Day. This year is forcing them to realize that’s not necessarily the norm. Democracy, unlike candy, does not come out of a vending machine delivering instant gratification. And that’s a good thing.

In India, the world’s most populous democracy, there isn’t anything like an “Election Day.” There’s an election schedule.

India’s 2019 general election happened in seven phases over more than a month, and it took almost another week after the last polling day before Indians knew the winner. With 911 million people eligible to vote and voter turnout at more than 67 percent, the process necessitated some 11 million officials, including security forces, pressed into service, some of whom travel to remote corners of the country by foot, train, and even an elephant or two. It’s been called the biggest management event in the world. It’s also very much a 21st-century affair.

India began introducing electronic voting machines in 1998, and since 2004, they’ve been used in all general and state assembly elections. They’re fitted with GPS devices to ensure they don’t get hijacked, and the machines come with a voter-verifiable paper audit trail, which allows officials to make sure that the electronic results are secure. (Five percent of paper results are checked against the electronic tallies.) Voters have their fingers marked with indelible ink so they do not vote more than once, and ballots are kept under guard until counting day. Despite occasional claims of hacking and court challengers some studies have shown the machines have actually cut down on electoral fraud and led to a dip in vote shares of some incumbent parties.

At a time when the U.S. is in the news for reducing voting booths and ballot drop off centers, it’s incredible to think that a polling station was set up in the Gir forest of Gujarat in India for just one voter. That’s because Indian law requires every voting citizen have a polling place accessible within 2 kilometers (just under 1.25 miles) of their home—a rule that applies even to the caretaker of a lonely temple in the middle of the forest. Foreign journalists offer up anecdotes like these as part of the colorful exotica of elections, India’s so-called “festival of democracy” (an elephant always helps in that regard)—but there’s something much more serious at work. These efforts might seem over-the-top but ultimately, they try to ensure that when the results are announced, citizens who voted accept them as legitimate. On April 11, 2019, voters in the state of Arunachal Pradesh, on the northeastern extremity of India, cast their ballots and went back to their daily lives knowing full well that they would not know the results until late May. But they retained faith in the democratic process and their vote’s worth.

It was not always this way. Parts of India were notorious for electoral fraud. Musclemen would capture electoral booths and stuff ballot boxes with votes marked in the name of their candidate. Even now, there are reports of voter intimidation and bribery. Every election brings up stories of entire families missing from voter lists. But overall, faith in the electoral process has increased by leaps and bounds ever since a no-nonsense, by-the-rulebook bureaucrat took over as India’s 10th chief election commissioner. T.N. Seshan, a longtime civil servant who ran elections from 1990 through 1996, dispatched central police forces to polling stations to prevent ballot boxes from being stolen. He introduced voters’ photo ID cards, enforced spending limits, and went after politicians who tried to bribe or intimidate voters. He even made candidates clean up the electoral graffiti they painted on city walls. Most importantly, he asserted the Election Commission of India’s autonomy like no commissioner had done before him, even though politicians called him arrogant and tried to clip his wings.

On April 11, 2019, voters in the state of Arunachal Pradesh, on the northeastern extremity of India, cast their ballots and went back to their daily lives knowing full well that they would not know the results until late May.

The multiple-stage election that resulted allows security forces and electoral officials to move from one part of the country to another monitoring the process. There are issues—the role of big money in elections, fake news, the tug-of-war over the autonomy of the Election Commission—but by and large, Indians have faith that their elections are more or less free, fair, and peaceful. As Mukulika Banerjee, anthropologist and author of Why India Votes? pointed out, in a country riven by deep social inequality, election day is one day in the calendar when you can experience what equality feels like. “By pressing that button, I prove that I exist even if nothing in government policy seems to remember that people like me exist,” she said.

That faith in democracy is the real issue here. For someone watching the American elections from afar, it’s mindboggling that “Will you accept the election results?” is actually a question that needs to be asked of the candidates running for the highest elected office in the land.

Ever since the infamous hanging chads of Florida in Bush v. Gore, Americans have come to view electoral delays with ideological suspicion. There have been persistent conspiracy theories about electronic voting manipulation. And now the bogey of potential postal ballot fraud has been added to the mix, even though the biggest problems bedeviling mailed-in ballots are errors, not fraud. In 2012, the New York Times reported that mailed-in absentee ballots were rejected at double the rate of actual in-person votes because of issues like signature mismatch or postmark problems.

But the conversation has not moved to how to make the process less prone to error so that no voter is left behind. Instead, elected U.S. officials, who should be at the forefront of building public confidence about the electoral process, have chosen to preemptively sow doubts about it. They’ve chosen to weaken the entire democratic edifice for short-term political gains.

This year, Donald Trump told the Republican National Convention unequivocally, “The only way they can take this election away from us is if this is a rigged election.” He has called mail-in voting a scam and claimed without any proof that at least 3 million undocumented immigrants voted for Hillary Clinton in 2016, a number that neatly encompasses the number of votes by which he lost the popular vote. The fact that the president might not accept the results of the election is even part of the narrative of the 2020 presidential election is a sign of something rotten in the state of democracy itself.

India, in an odd way, having lived with tainted elections, seems to have grasped what Americans have not—faith in the legitimacy of the process is, in the long run, more important than the election result.

Take India’s former prime minister Indira Gandhi, who was always eager to blame a mysterious “foreign hand” for everything from spreading her opposition’s propaganda to stymieing development. She even suspended normal democratic processes in 1975 by imposing a state of emergency. But when the Indian electorate delivered a stinging blow to her party in 1977 and she lost her own parliamentary seat—a rebuff she had not anticipated—even the autocrat accepted the people’s verdict.

That the 2020 election is unfolding over weeks might feel unprecedented to many Americans. But what is truly unprecedented here is that Americans are being actively encouraged to lose faith in their own democratic process by their own elected officials. That’s why it’s crucial this November onward that the U.S. learn from democracies like India about how to table election anxiety and accept that democracy delayed is not democracy denied.