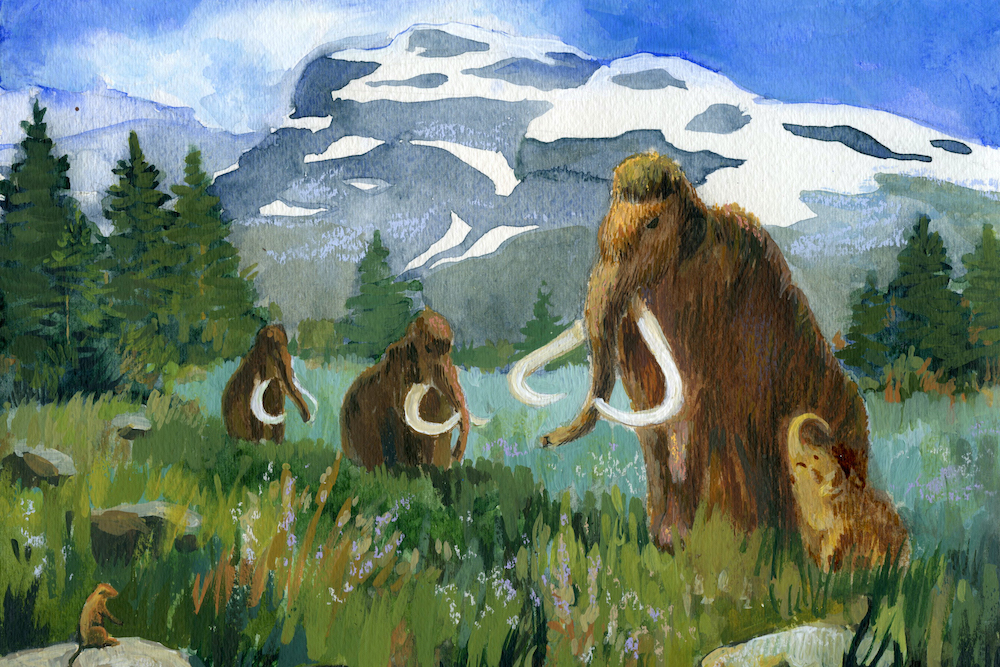 Bringing extinct species back to life may sound like science fiction, but it’s a real thing—perhaps the most important to occur during the past 4.5 billion years. Called “de-extinction,” the resurrection of lost species is one of the many applications to be revolutionized by the new gene-editing technology CRISPR-Cas9. CRISPR, which stands for “clustered regularly interspaced short palindromic repeats,” hit the headlines in October when researchers Jennifer Doudna and Emmanuelle Charpentier were awarded the Nobel Prize for chemistry for their role in developing a new technique for genetic editing. CRISPR repurposes a process found naturally in bacterial immune systems that now allows scientists to modify with extraordinary accuracy the DNA of almost any living organism.

The first successful de-extinction occurred long before the advent of CRISPR. The Pyrenean ibex (Capra pyrenaica pyrenaica), a type of wild mountain goat commonly known as a bucardo, once was a common sight in the French Pyrenees and northern Spain. By the late 19th century, hunting had reduced the species to fewer than 100 individuals. When the last one, a female known as Celia, died in January 2000, the Pyrenean ibex joined the estimated 5 billion species that have become extinct since life arose on this planet. But in this case, three years later, on July 30, 2003, a team of French and Spanish scientists gathered around a pregnant domestic goat and delivered by cesarean section a live kid genetically identical to the extinct bucardo. For the next seven minutes (after which the animal died from respiratory failure), the Pyrenean ibex was extinct no more.

The extinct bucardo was returned to life through the well-established technology of cloning through nuclear transfer. This technique, in which a cell containing the complete genome of the extinct species is inserted into the egg of a living animal, was used to clone Dolly the sheep in 1996. But now, with CRISPR, de-extinction does not require a live or frozen cell from the extinct species. Instead, all scientists need are organic remnants—such as pieces of bone—that contain fragments of DNA. Those fragments allow geneticists to discover the complete genome of the extinct animal (a process scientists refer to as “sequencing”). Once they have this “recipe” for the extinct species, CRISPR enables scientists to edit the DNA of its closest living relative to create a genome that, as edited, approximates the genetic code of the extinct species. Think of the living animal’s DNA as version 2.0 of a piece of software: the goal is to get back to version 1.0. You compare all of the millions of lines of code to spot differences, and then painstakingly edit the lines with differences to restore the code to its original state.

Once the DNA has been edited to reintroduce the key traits of the extinct plant or animal, the edited DNA is inserted into the nucleus of a reproducing cell. The resulting individual may not be genetically identical to the extinct species, but the key traits that made the extinct species unique are reintroduced, and the resulting animal or plant has the potential to be the functional equivalent of its extinct relative. So, for example, the scientists working on the de-extinction of the woolly mammoth (which last roamed the Earth about 4,000 years ago) are starting with the DNA of an Asian elephant, and then using CRISPR to reintroduce the traits that made the woolly mammoth unique, such as the metabolism, subcutaneous fat, and shaggy coat that allowed it to survive in the sub-Arctic tundra.

But why do this? Most proponents of de-extinction make an argument based on ecological restoration. For example, large herbivores such as the woolly mammoth played a critical role—through trampling, grazing, and fertilization—in the maintenance of the grassy cap that insulated the permafrost of the great northern tundra. When these large grazing beasts disappeared, the grassy cap declined, allowing the thawing of the permafrost below and consequential release of massive volumes of previously trapped greenhouse gases, significantly accelerating global warming. To reverse this effect, Russian scientists in a remote part of Eastern Siberia are working on an effort called “Pleistocene Park.” Their vision is a restored Mammoth Steppe—a place where the Siberian permafrost is again insulated by treeless grasslands extending to the horizon in all directions, on which vast herds of wild horses, bison, and de-extincted mammoths graze in symbiotic partnership with the restored cold-weather savanna.

Will we use our power in selfish, shortsighted, and reckless ways, or instead dedicate ourselves to deploying the new technologies to mitigate our past wrongs and reestablish a healthy Earth?

Another de-extinction currently being attempted for purposes of ecological restoration is that of the passenger pigeon, once North America’s most abundant bird species, with billions of individuals as late as the 1870s. The entire population was shot, netted, hunted, or otherwise slaughtered by humans. In 1914, the last individual, Martha, died in a Cincinnati zoo. The consequences of the rapid extinction of a keystone species at this scale are not precisely understood, but we know enough to expect them to be widespread and profound. For example, the loss of the passenger pigeon caused disruption of the forest regeneration cycle and significant declines in forest health. It also may have precipitated the proliferation of Lyme disease. “Re-wilding” proponents such as Stewart Brand’s Long Now Foundation also point out that any de-extinction enhances the biodiversity that is the foundation for healthy ecosystems.

One of the other justifications for pursuing de-extinction is a moral one: possession of the power to bring back lost species implies a moral duty to use that power, at least in the case of species whose extinctions were caused by human beings. In other words, we have a duty to right our prior wrong. It is notoriously difficult to estimate the number of species whose disappearance can be blamed primarily on human interference. But all scientists agree that humanity’s greed, recklessness, and negligence have greatly accelerated the natural pace of extinction, harming both the planet and ourselves.

The enthusiasm of de-extinction’s supporters is nearly matched by the skepticism of its detractors. Many of the issues are practical, such as doubts that man can create populations with sufficient numbers and genetic diversity to be sustainable in the wild; concerns that the de-extincted animals are neither genetically identical to the extinct species nor benefit from the non-genetic drivers (such as parental nurturing) that determined their behaviors; and arguments that plants and animals created based on ancient genomes will not flourish in contemporary conditions. For example, the passenger pigeon, if revived, would face a world in which the American chestnut, which provided a major part of its habitat and food, has disappeared.

Conservation biologists are split on the matter. Some argue that belief in the possibility of de-extinction creates a moral hazard, opening the door for those benefiting economically from the destruction of habitat to argue that even if a species is lost, it can always be “brought back.” Others simply say that in the current era of human-caused mass extinction, society should prioritize those endangered species that can be saved rather than dreaming of returning lost ones to life. They argue that CRISPR, instead of being deployed for de-extinction, should be used to increase the genetic diversity of a surviving endangered population, increasing its odds of survival.

One thing is certain. Like the gift of fire to humanity by Prometheus, the cat is out of the bag. Efforts by governments and NGOs to limit or control use of genetic technologies—such as the 2020 guidelines issued by an international commission convened by the U.S. National Academy of Medicine, the U.S. National Academy of Sciences, and the U.K.’s Royal Society—are unlikely to deter further experiments involving the editing of the heritable human genome. What scientists can do, at least some, somewhere, will do.

And why do I argue that the result may be the most important thing to happen on the planet for 4.5 billion years? Since the dawn of life on Earth, species have developed through the process of random genetic mutation followed by natural selection—by evolution. But from this moment forward, that has changed. CRISPR-Cas9 gives us the ability to hack evolution. Rather than waiting for mutations to occur randomly, we can amend our genetic inheritance (or that of the other life forms). This means the substitution of human desire and choice for the process of natural selection. Is this inevitably the disaster that many predict?

Humanity has a long tradition of making interventions designed to improve, restore, and steward the natural world. Virtually no agricultural or horticultural species has been unaffected by hybridization, and most of those altered plants are now valued citizens of the natural world. Wheat, grapefruit, and peppermint all resulted from interspecies breeding (as did, on other branches of the tree of life, cattle, bison, African bees, and honeybees). Genetic editing is, without a doubt, a new and different tool, but the result, species created by man (rather than by the operation of natural selection), is not.

Those instinctively suspicious of these types of interventions in nature tend to view the natural world as static. But we now understand that nature is not some stable, passive stage on which the dance of life plays out. Instead, the relationship between an environment and the life it hosts is highly interactive. Species adapt to their habitat and then change it. From the moment Homo sapiens emerged during the Middle Paleolithic, we inserted ourselves into this dance by transforming habitats and the organisms they supported. Population growth and technology mean that the scale of our impact is now global. By the act of conceiving the current geological era as the Anthropocene, where human activity is the dominant influence on the planet, we have started to come to grips with the fact that we are now the creator, and no longer merely the created. It’s a responsibility that cannot be dodged. Human moral and ethical frameworks must catch up to our technology. Will we use our power in selfish, shortsighted, and reckless ways—or instead dedicate ourselves to deploying the new technologies to mitigate our past wrongs and reestablish a healthy Earth?

Of course, caution is always important. But too often, timidity and hostility to progress disguise themselves under the guise of prudence. If tools like CRISPR allow us to replace keystone species like the woolly mammoth and passenger pigeon in order to keep greenhouse gases in the tundra or to restore healthy ecosystems, then we should use them. We cannot escape choice through inaction. Now that we have the technology for de-extinction, the failure to use it to heal the planet is also a choice for which we will be held accountable by future generations.