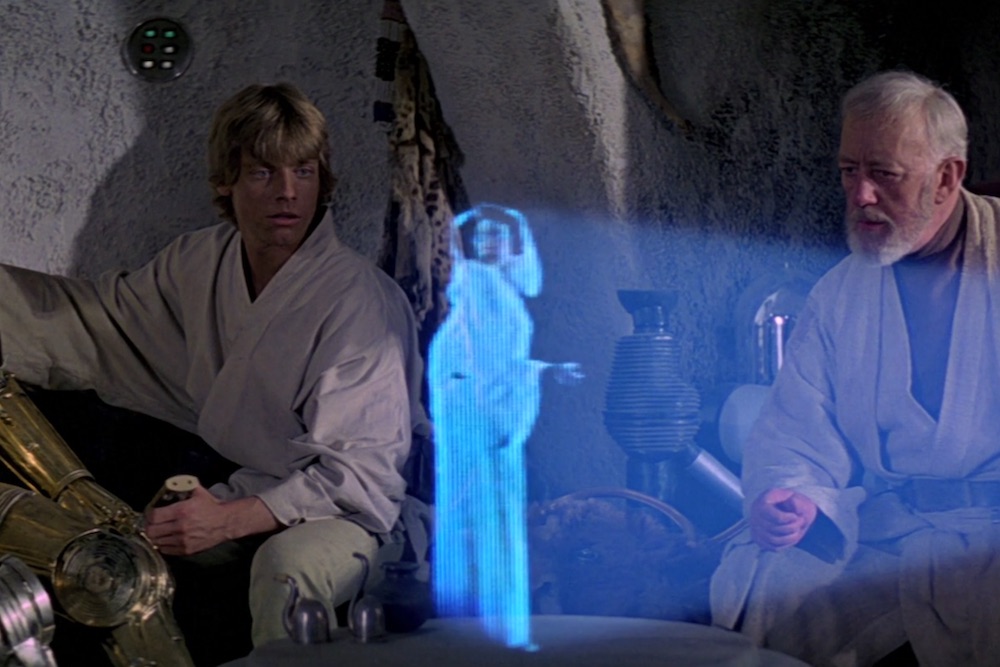 Long before Kim Kardashian West made headlines for being gifted a hologram of her deceased father for her 40th birthday, a panel session at South by Southwest Interactive, an annual conference for tech innovators, predicted innovations like this as inevitable. As the panel’s program text read: “Grandma passed away last year, but she’s coming back for Thanksgiving dinner this year. This may sound like a horror story,” it continued, “but it could be the future of family reunions.”

The 2015 conversation, titled “HoloGramma: How Tech Can ‘Bring Back’ Our Departed,” discussed how, through extreme technological means, people would one day maintain not only the memory of a deceased loved one—but their very presence in the home.

Whether this concept—that grandma could be switched on, say, in the living room whenever you wanted to see and talk to her—feels creepy, fascinating, or the uncanny mixture of both, consider this: In the modern age is such an idea that shocking? That is, don’t we encounter and interact with the pixelated presence of the dead all the time? For instance, I can make coq au vin at home, guided by an old YouTube video of Julia Child while listening to Prince. Or if my husband and I turn on the morgue that is Turner Classic Movies, we will inevitably pull open the IMDb app to answer questions about the parade of people from the past appearing on the screen. To live a modern media-saturated existence means to swim in ectoplasmic estuaries of life and death, in which living bodies regularly mingle with specters of the long-gone.

Granted, watching Bogie & Bacall is an experience with much less emotional investment than, say, if a “HoloGram” of my late father drifted into the room (though for Bogie & Bacall’s kids, To Have and Have Not may be simply a cruelly titled home movie). Degrees of affect aside, though, many scholars claim that the very experience of any electronic media technology is an essentially spectral encounter. The disembodied voices on radios and the luminous figures on cinema screens constitute what media studies professor Jeffrey Sconce equates with hauntings, writing about a “media occult” surrounding the “seemingly ‘inalienable’ yet equally ‘ineffable’ quality of electronic telecommunications.” Communication scholar John Durham Peters claims that modern media is infused with a “spiritualist tradition”—one we participate in as readily as grieving people in 19th-century America and Europe sought out the services of spiritualists, professionals who claimed to be able to conjure the dead for a brief chat.

It is, as Peters argues, from those very practices of communing with the dead via mediums that we derived our present-day terminology about communication via media. By participating in social interactions designed by and for electronic media, we become more comfortable with these essentially spiritualist encounters. We learn to live with their summonings and ghosts.

Rather than ectoplasm or spirit-stuff, our technical ghosts comprise combinations of words and sounds, fine-tunings of imagery and ideology. Stage celebrities and film stars, TV icons, and pop stars—they are people, of course, but most of us don’t interact with the actual person, with their flesh body. Instead, we participate in encounters with nebulous packages of literal imagery and figurative image, of carefully coordinated public appearances and deftly staged concerts. Philip Auslander, a performance studies scholar, argues it is not the actual celebrity but their performing persona that fans have “the most direct and sustained access” to, not only through their work but also their public messaging.

This persona is carefully and socially managed. A pop star may control much of it, but not all of it. Managers, publicists, handlers of various stripes have a hand in shaping it, as do audiences and fans. So the persona is not the real person nor the fictional character; it’s the liminal figure in between—the one modern media, by its spectral nature, is adept at presenting, projecting, and protecting. And when a public figure dies, their persona continues to be managed posthumously by handlers and fans. Robert Johnson, Woody Guthrie, Mama Cass, Elvis Presley, both dead Beatles, and Tupac Shakur are just a few of the hundreds of artists who sold previously unreleased or even newly crafted records while dead, often selling more recordings from the grave than they did while alive. Orson Welles’s “final” film was just released two years ago. Fans revel in discoveries of “lost” art, interviews, or other ephemera that returns some aspects of a late celebrity’s persona to circulation through the same channels they haunted while alive.

In recent years, though, the celebrity’s posthumous presence has been taken one step further. Numerous deceased pop-music figures—from Roy Orbison to Buddy Holly, Michael Jackson to Whitney Houston—have been resurrected for new performances via animated digital simulations that are projected onto concert stages. These sophisticated animations and apparatuses present likenesses of the performer as if they were present in body as well as spirit. They are staged in a manner that highlights that illusory presence, often with real people on stage interacting with the spectral imagery.

To live a modern media-saturated existence means to swim in ectoplasmic estuaries of life and death, in which living bodies regularly mingle with specters of the long-gone.

As a former music journalist and current researcher in communication and science studies, I have examined and written about the specific technical means for the production of these “holograms”—an inquiry that began when I received a 2011 press release about “the world’s first virtual pop diva,” a Japanese anime-style character named Hatsune Miku, who has no corporeal existence but who nonetheless headlines concerts in crowded arenas. When I attended a “live” concert by this digitally projected character, in a large theater packed with a thousand rapt fans singing along, the pop-music critic in me wondered whether years of honing criteria for the evaluation of human performance on stages had just been made irrelevant. The scholar in me, however, recognized another intervention of technology into social norms and rushed to connect history and theory to explain the new experience.

The American fountainhead of this trend was Tupac Shakur, who—16 years after his death—headlined the 2012 Coachella music festival. Before an audience of nearly 100,000, the real Snoop Dogg and the real Dr. Dre introduced the “not real” 2Pac, who materialized on stage and performed two songs (one of which had been released after he died, implying a chain of production unbroken by pesky mortality). News media ate up the spectacle, and Twitter went into a twitter.

My own analysis of spectator reactions posted to Twitter within 24 hours of the Tupac spectacle shows that fans initially experienced an expected uncanny unease but then quickly settled into the experience of a reality they were accustomed to through a lifetime of modern media hauntings. What spectators saw were familiar bits of Tupac’s living persona that had been cobbled together and reconstituted for presentation within a musical context that was, in every other aspect, perfectly normal. He looked the same (face, body, trademark tattoos and Timberlands). He sounded right. He boasted and swaggered and performed. The digital Tupac gave little reason for derision (though there was some) or angry cries of fakery (though there were a few) because it provided just enough ingredients from the working persona that fans still recognized from Tupac’s lifetime. No one ran screaming from the festival grounds; they knew or were able to determine that this was a ghost and that it was (somehow) technically produced. They also already knew how to separate the persona from its material media, applying it to a technology almost as easily as they had hung it on his flesh body. By the following morning, fans were speculating (jokingly, but maybe only by half) about a new album by “2.0Pac,” where he might have gone to eat after the show, and who he would soon be dating. They were happily haunted, already living with the dead yet again.

It’s not the first time technology has promised and delivered a mediated afterlife. For centuries, gadgets and gizmos have been invented and sold to feed into on our age-old questions around mortality—about what lives on after we die and how we might maintain contact. From the basic wood-and-glass planchette (later, the Ouija board) to Thomas Edison’s mused-about but never-built “spirit phone” (which was to dial up the departed), these frauds and fantasies, respectively, have offered mystifying possibilities for contacting or manifesting the presence of the dead. The performing hologram is the latest materialization of mediated spirituality—a new iconic image, like those of saints, as philosopher Matthew Harris has written, wielding power “much in the same way that a relic has power for the religious devotee.”

These performing hologram systems are simply HoloGramma writ larger. They are technical projections of an embodied simulation of the dead back into a real space for new social interactions among the living. They are media doing what media do—presenting a person’s persona within specific contextual frames, regardless of where that person’s body might be, or if it might be.

The idea of holographic grandmothers is simply a dimensional extension of existing media interactions between the living and the dead. While a Tupac or Kardashian hologram is currently beyond the means of most, the average person’s persona imprinted across digital platforms is not buried as efficiently as our body, nor does it decay as swiftly. This data may not only live on through the networks, it may also continue to act. Which suggests the future of posthumous presence begins in the ways we currently organize and nurture, while we live, the mediated elements of persona that will survive us—and that may be crucial to the grief and mourning of loved ones left behind.

This is already happening. Each March, for instance, Facebook friends and I still wish a former colleague a happy birthday, even though he’s been deceased for several years. He responds, too—or his sister does, anyway; she manages Brian’s online afterlife, posting alongside his eternal photographic smile.

It’s no fireside chat with HoloGramma, mind you, but every knitted scarf begins with a few innocent strands.