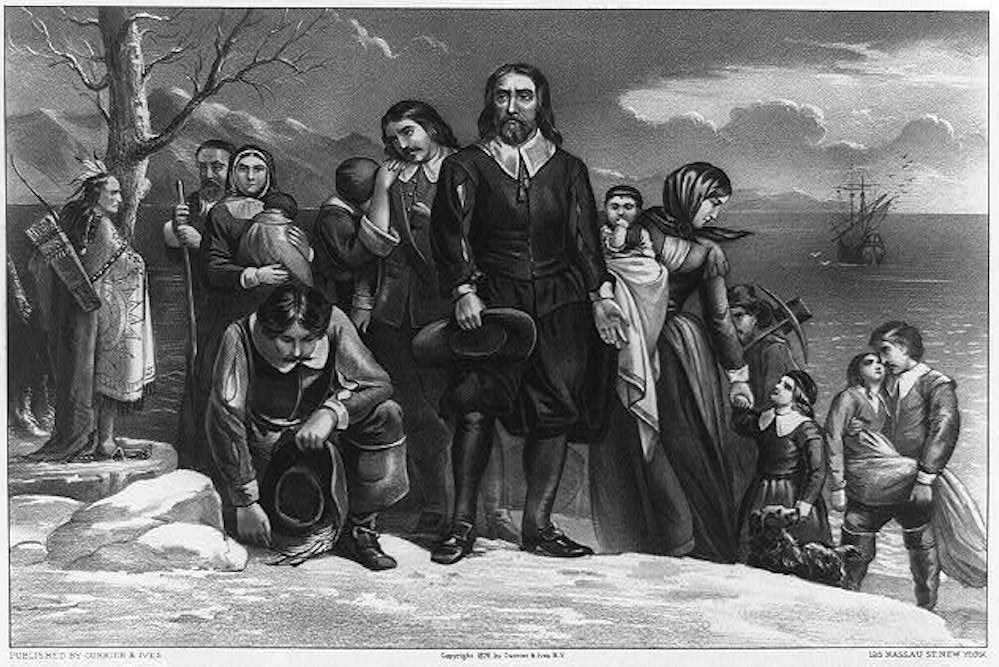 December 22 marks the 400th anniversary of the Pilgrims’ landing at Plymouth. Their legacy remains evident in today’s fractured and polarized republic. Courtesy of the Library of Congress.

December marks the 400th anniversary of the Pilgrims’ landing at Plymouth, the moment habitually yet mistakenly thought of as the beginning of America. The conflation of New England’s history with that of the nation at large, encouraged by generations of Harvard-reared scholars, continues to warp Americans’ understanding of their past. By the time the Mayflower dropped anchor off Cape Cod, the Jamestown settlement in Virginia had survived (barely) for more than a decade, while Spanish settlements at Santa Fe, New Mexico, and St. Augustine, Florida, were far older.

In part, the importance of the Pilgrims has been exaggerated because of the peculiarly American values that they are said to have brought to the New World and spread through the colonies: rigid discipline, austere rejection of earthly pleasures, the fusing of religious impulses with political ideas. All of these indeed distinguished the Pilgrims from other groups of early trans-Atlantic migrants, though the old easy binary between profit-seeking Virginians and pious Yankees no longer commands much respect among scholars.

Yet it is another attribute of the Pilgrim influence that arguably holds even greater sway four centuries after their arrival. Understanding that influence starts with the history of their name. The Pilgrims weren’t called that in their day. Instead, they were known as “Separatists,” for their desire to break completely from the Church of England, rather than cleanse and reform it from within—the approach urged by the more moderate Puritans.

That separatist impulse to leave an established community in protest of its corruption, to choose the remedy of “exit” rather than “voice,” would set the pattern for countless American protest movements to come. The Pilgrims, by word and deed, established separation as an actionable precedent for any American group alienated from the status quo. From colonial times to the present—especially in the Revolution and the Civil War—that secessionist impulse would define American history, and sometimes threaten to overturn it entirely.

While the Pilgrims’ Thanksgiving is a familiar story, Americans know little about their pronounced separatism—radicalism, really. The Separatists emerged near the end of the 16th century, as a renegade movement of dissident Protestants arose in the East Midlands of England. Rejecting the state-backed Church of England as too rigid and autocratic, too similar to the Roman Catholicism from which it had itself broken off a few decades earlier, the dissenters started setting up their own illegal congregations. Many were fined for not attending official services, while others were executed for refusing to renounce their heretical beliefs.

Before long, congregation member William Bradford later recalled, “they could not long continue in any peaceable condition, but were hunted & persecuted on every side.” By 1608, many had decided to leave. About 100 sailed across the North Sea to Amsterdam. A year later they resettled in Leyden, 20 miles to the southeast, which Bradford called “a fair & bewtifull citie, and of a sweete situation.”

In 1620, the Separatists decided once again to move on. They didn’t speak the language (though their children increasingly did, causing parents to fear assimilation); they had few economic opportunities; and they didn’t think Dutch morals were quite up to snuff.

The tradition of separatism handed down from the Pilgrims imbued American social and political life with the brash individualism and political fractiousness so evident—and dangerous—today.

They contracted with a ship called the Mayflower to take them across the Atlantic. Yet even another exodus wouldn’t cure the group of its fractious tendencies. The ship’s passengers, one wrote early in the journey, were “un-united among ourselves.”

They landed first on Cape Cod, in November 1620. Who knows what thoughts occurred to them as they walked on the snowy shoreline, breathing in the pure, frozen air? The future was uncertain. Half would be dead by spring. But with what Bradford called “the vast and furious ocean” between them and their tormentors, one thing was clear: If they had wanted separation, this was it.

Some wanted even more. Most of the early New England towns and colonies were founded in the act of secession from another pre-existing community. Once the new arrivals began separating themselves from those whom they deemed impure, there seemed to be no end to the fragmentation.

In 1636, Roger Williams, a fiery preacher who before leaving England had taken Hebrew lessons from the poet John Milton, was expelled from Massachusetts for denouncing the colony as insufficiently extreme. In the middle of a brutal winter, Williams escaped arrest during a blizzard and spent 14 weeks walking more than 50 miles through the snow, “not knowing what bed or bread did mean,” before finding shelter with sympathetic natives. In the spring, he founded a new colony at the head of Narragansett Bay. He called it Providence. With its commitment to religious pluralism and strict separation of church and state, the town became a haven for dissenters from the other colonies.

The separations continued. In 1638, Anne Hutchinson of Boston, a self-proclaimed prophet, was convicted of sedition, excommunicated from the Puritan church, and banned, like Williams before her, from Massachusetts. Hutchinson and her supporters went south to Aquidneck Island in Narragansett Bay, and started building a settlement they called Portsmouth. (Meanwhile, her brother-in-law, John Wheelwright, another dissenting minister, went north with some 175 followers to found the town of Exeter, later part of New Hampshire.)

Soon a group of dissenters left Hutchinson’s Portsmouth to found Newport. Then there was Samuel Gorton, whose belief in the divinity of every human being set him outside the bounds of even the most radical Puritans. He tried to live in Boston, Plymouth, Portsmouth, and Providence before finding each of them inadequate. His sect founded its own settlement, Warwick, just south of Williams’ city.

It would take more than a century-and-a-half after the landing at Plymouth for the North American colonists to discover the merits of forming a single national union. Yet the one formed then—during the Revolution against Great Britain, a founding act of secession—was weakened from the beginning by the fact that each state retained its separate character and sovereignty.

A decade later, the new federation all but collapsed and had to be replaced by a Constitution concentrating far greater power in the central government. Still, compromises had to be made with the spirit of separatism. This included the provision mandating equal representation in the Senate for all states regardless of population, which gives Wyoming the same number of senators as California, despite the former having less than two percent of the latter’s population.

The tradition of separatism handed down from the Pilgrims imbued American social and political life with the brash individualism and political fractiousness so evident—and dangerous—today.