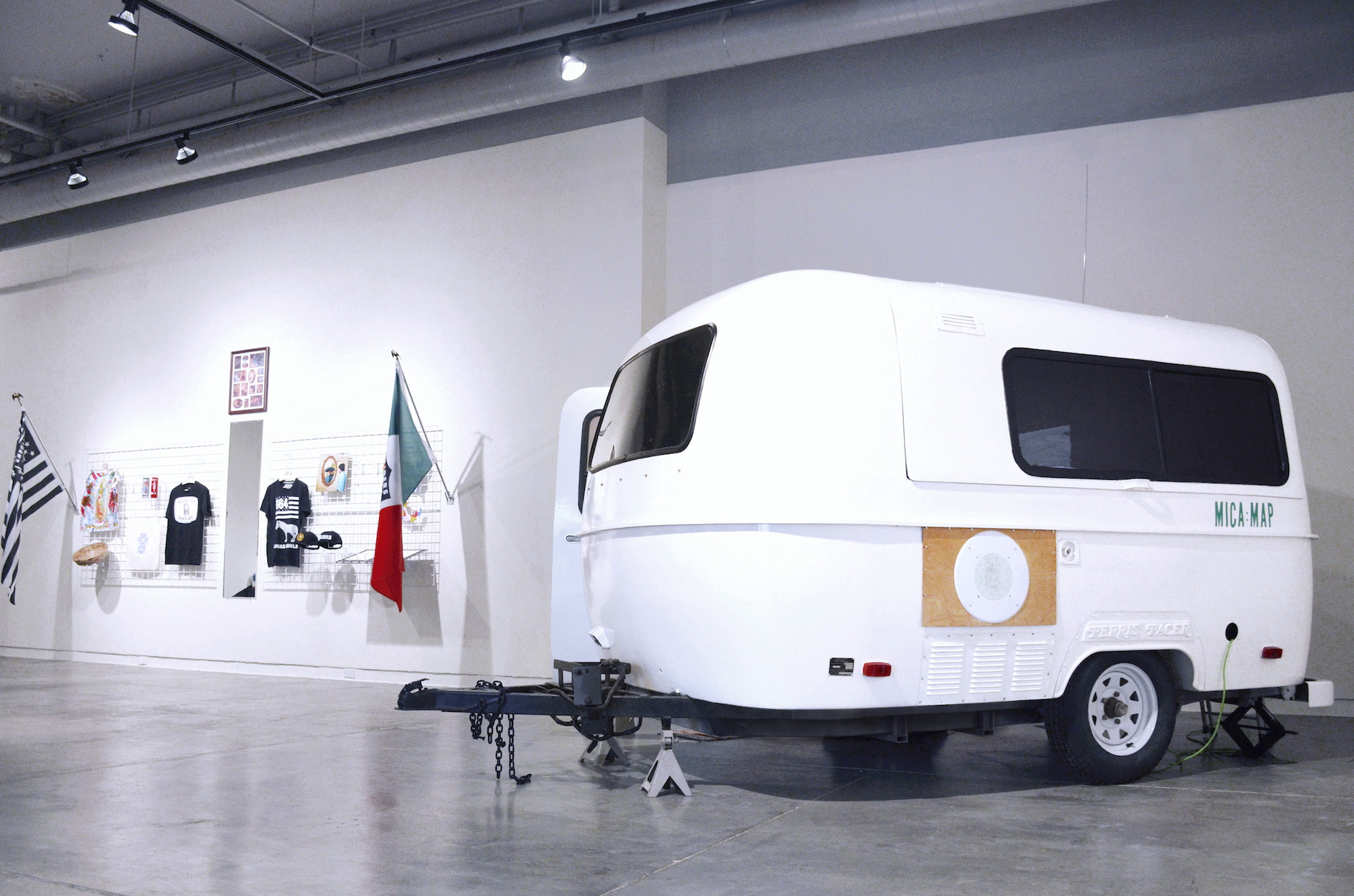 MOBILE INSTITUTE FOR CITIZENSHIP & ART [MICA], 2016- [In “Regionalia” at CSUF Grand Central Art Center] Retrofitted Fiberglass trailer 13 ft x 7 ft x 8 ft MICA is a nomadic platform for research, dialogue and exchange, housed within a retrofitted fiberglass trailer. It functions as a screening room, reading space, listening station, recording studio and hyper-local FM radio station through which we interrogate notions of home, belonging and political agency in the context of the U.S./Mexico borderlands. Photo by the artists. 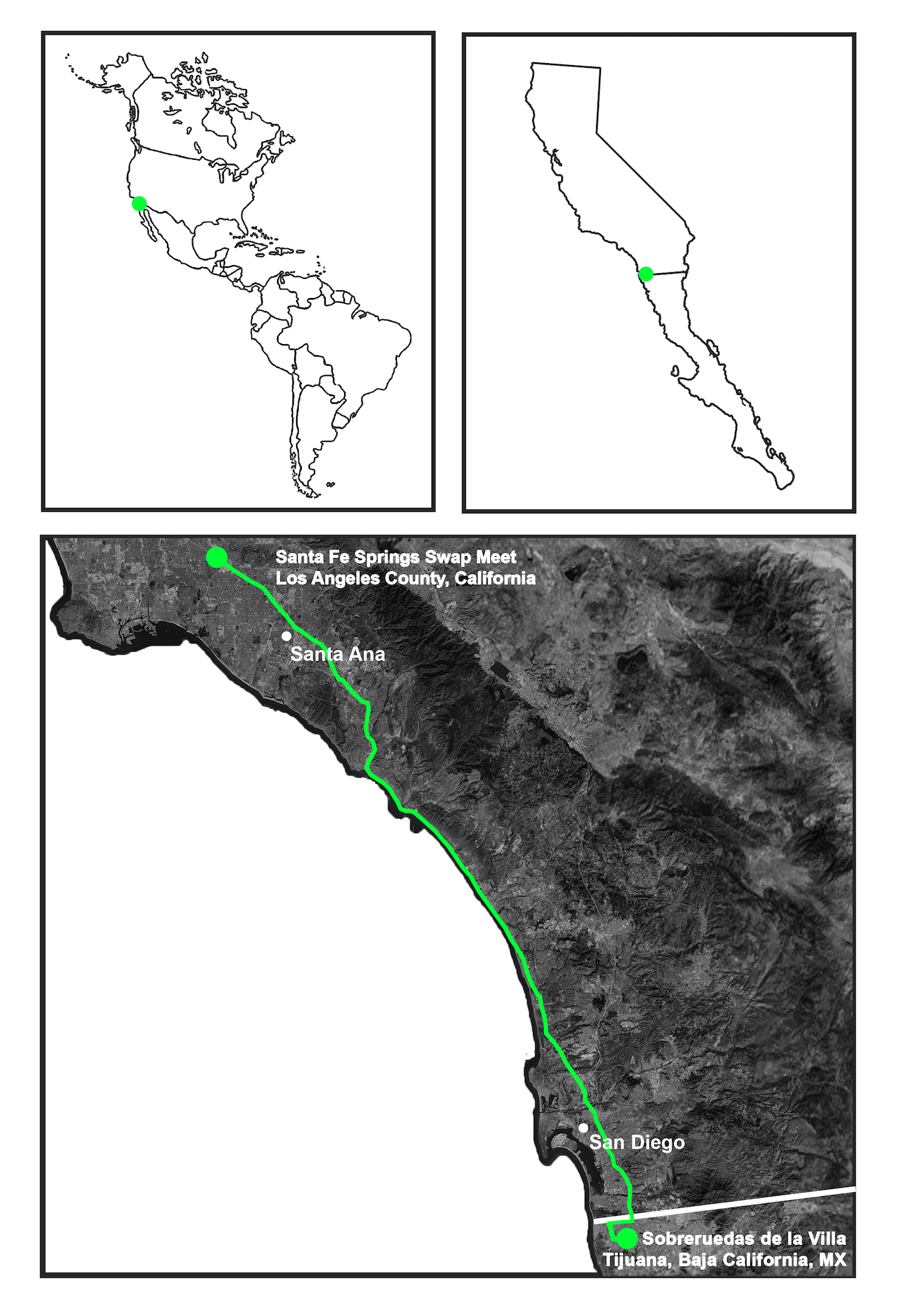 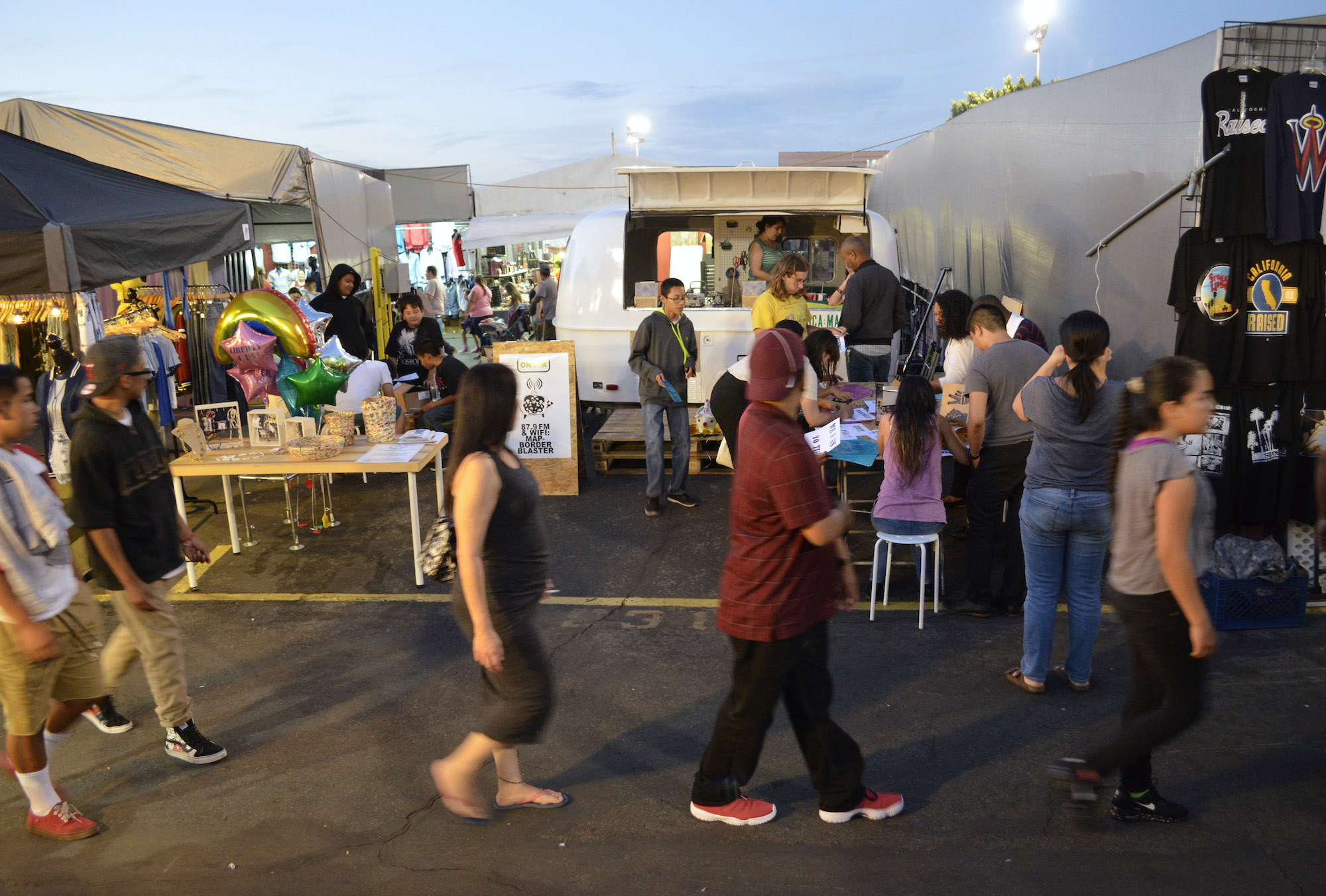 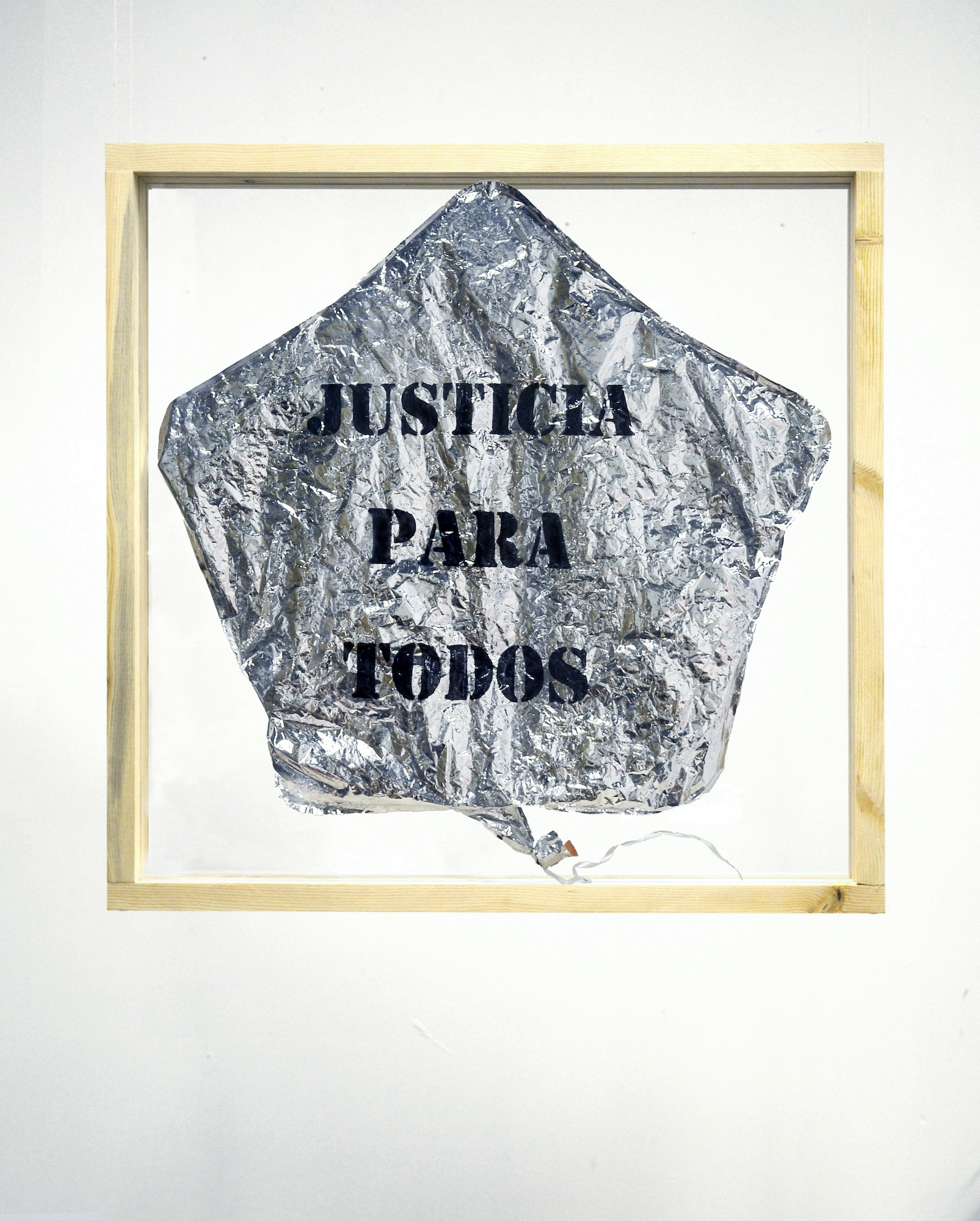 MICA “PROTEST BALLOON” [Detail], 2016 Ink on Mylar 20 in. x 20 in. Some of the balloons produced as part of the “Protest Balloon” workshops were preserved as part of an archive for future exhibitions. Photo by the artists. 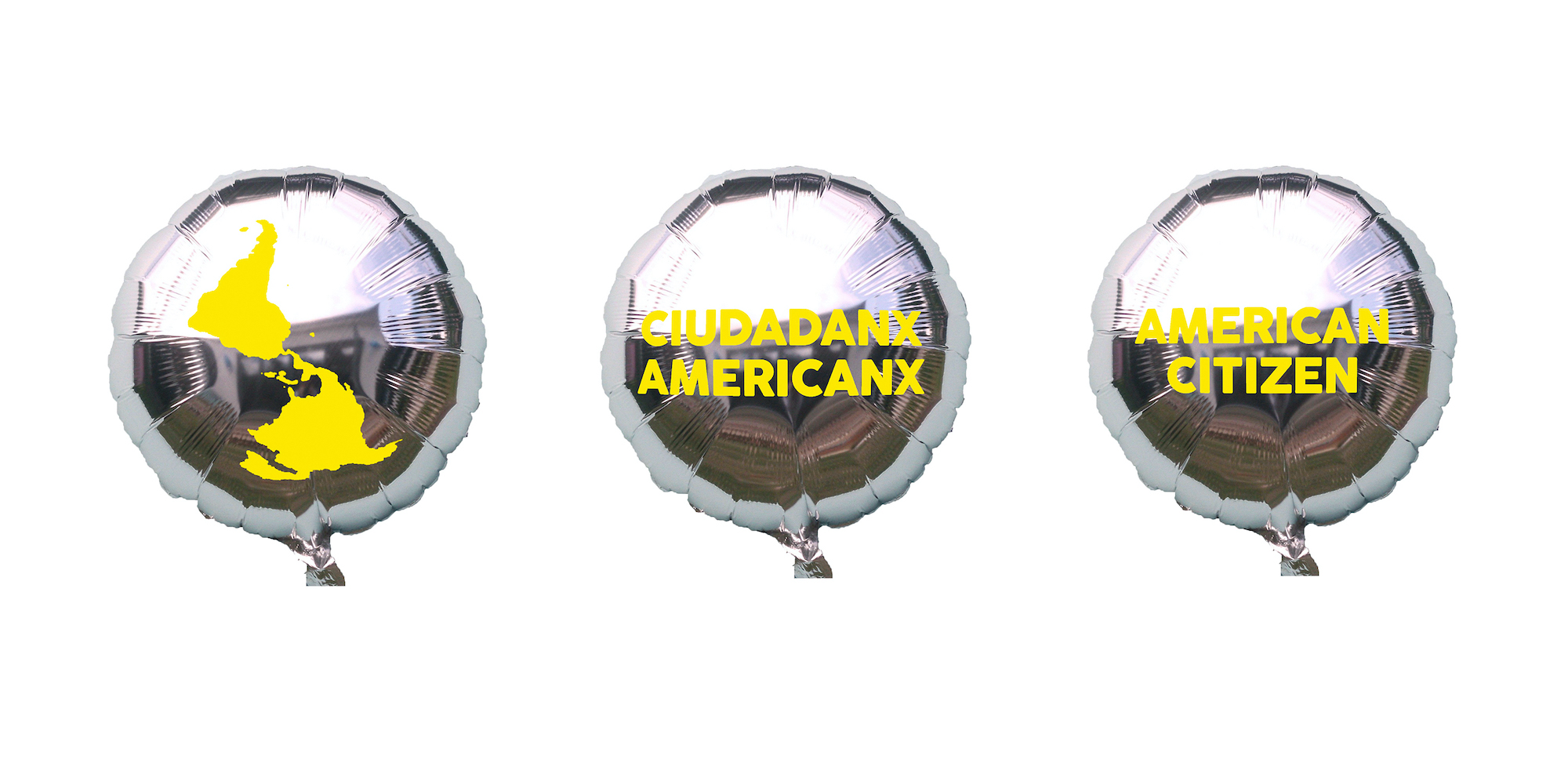 PROTEST BALLOON: CIUDADANX AMERICANX/AMERICAN CITIZEN, 2018 [In “Regionalia” at CSUF Grand Central Art Center] Screen-printed mylar balloons 20 in [Individual Balloons] Limited edition mylar “Protest Balloons” inspired by workshops in marketplaces. On one side these were screen-printed with a map of the American continent, and on the other the phrase “American Citizen” in English or “Ciudadanx Americanx” Spanish. 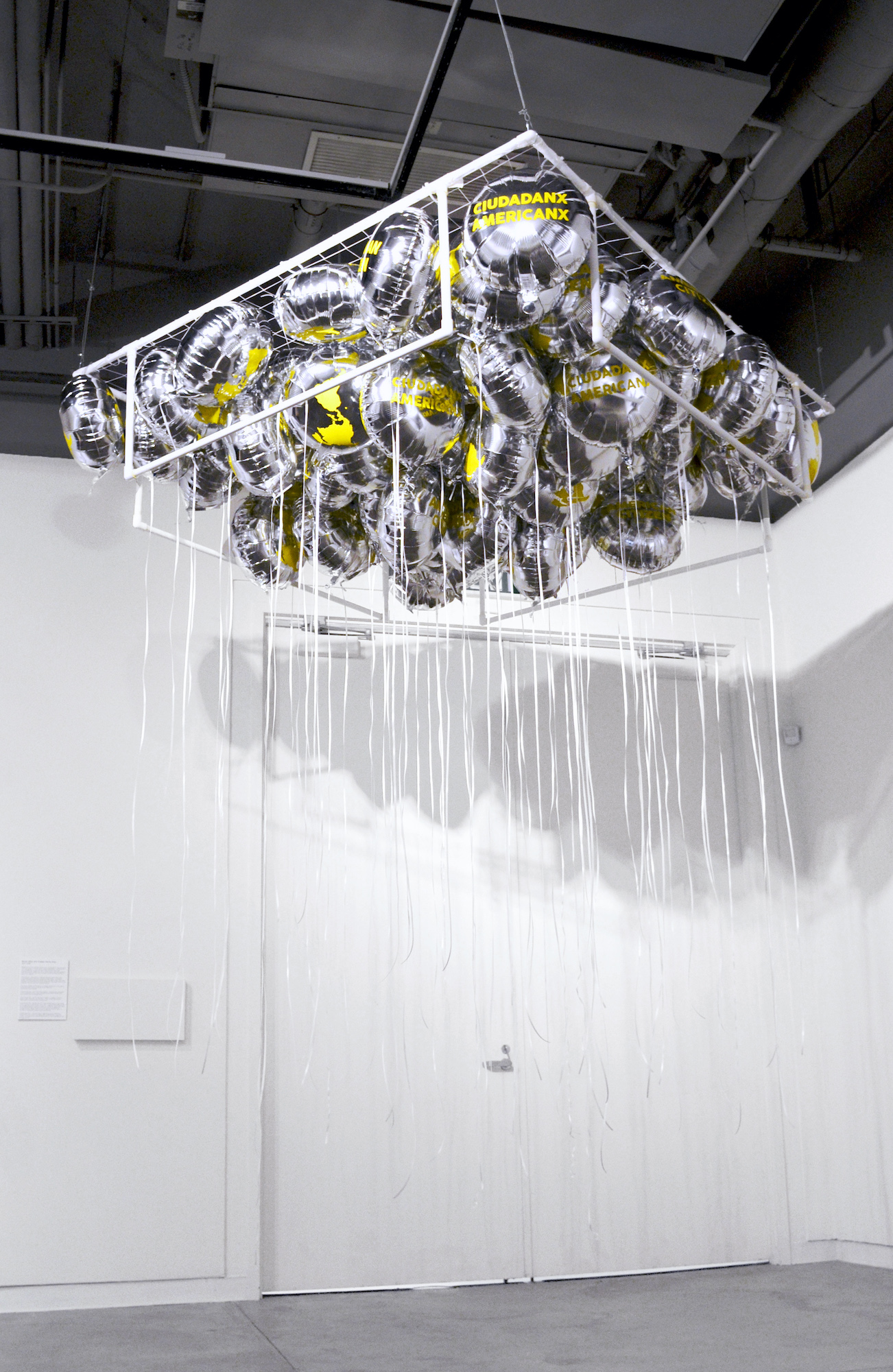 PROTEST BALLOON: CIUDADANX AMERICANX/AMERICAN CITIZEN, 2018 [Detail] [In “Regionalia” at CSUF Grand Central Art Center] Screen-printed mylar balloons 20 in [Individual Balloons] The public was invited to take a balloon with them, and fly it out of the gallery into public to enunciate an alternative conception of “American” citizenship. 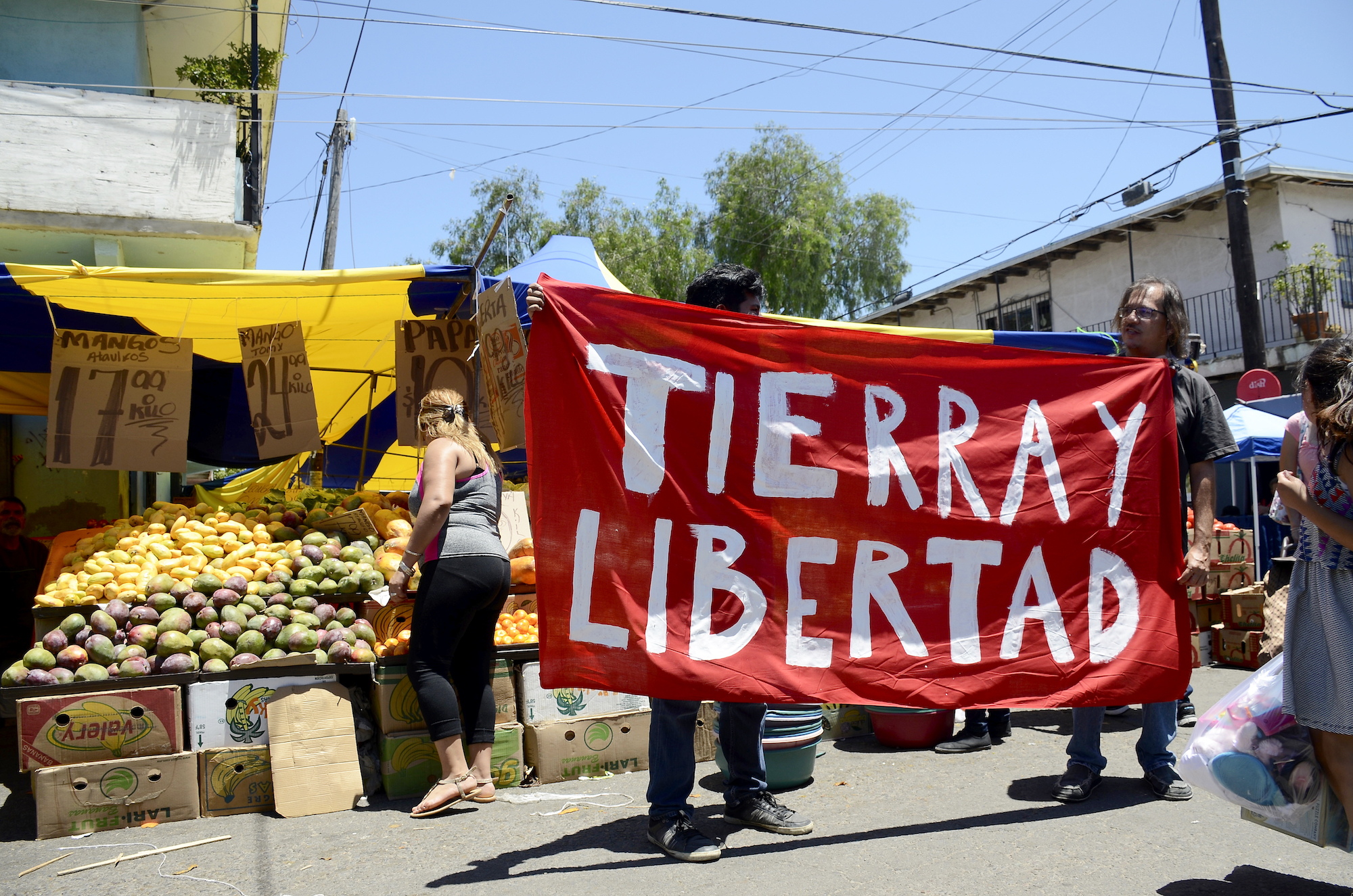 MICA + COMITÉ MAGONISTA TIERRA Y LIBERTAD, 2018 [In Sobreruedas Pancho Villa, Tijuana] Performance As part of the installation of MICA at the Sobreruedas Pancho Villa street market in Tijuana, we invited the “Comité Magonista Tierra y Libertad” arts collective to design actions to take place in the space of the market. One of these, was a procession echoing the calls for “land and liberty” issued by the Flores Magon brothers who mobilized binational militant groups between Tijuana and Los Angeles in the early 20th century to try to institute more radically democratic and representative forms of government in the region. Photo by the artists. 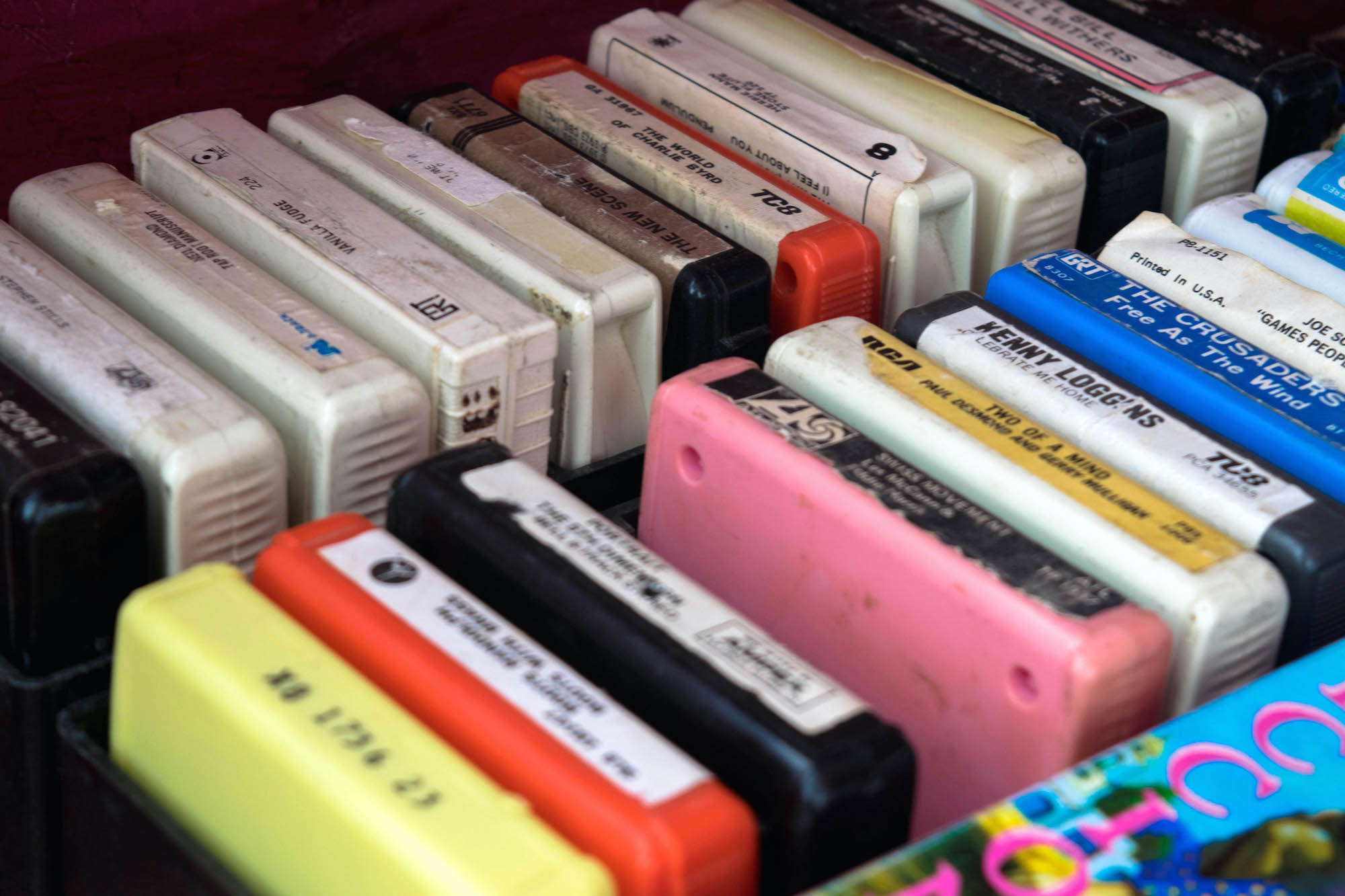 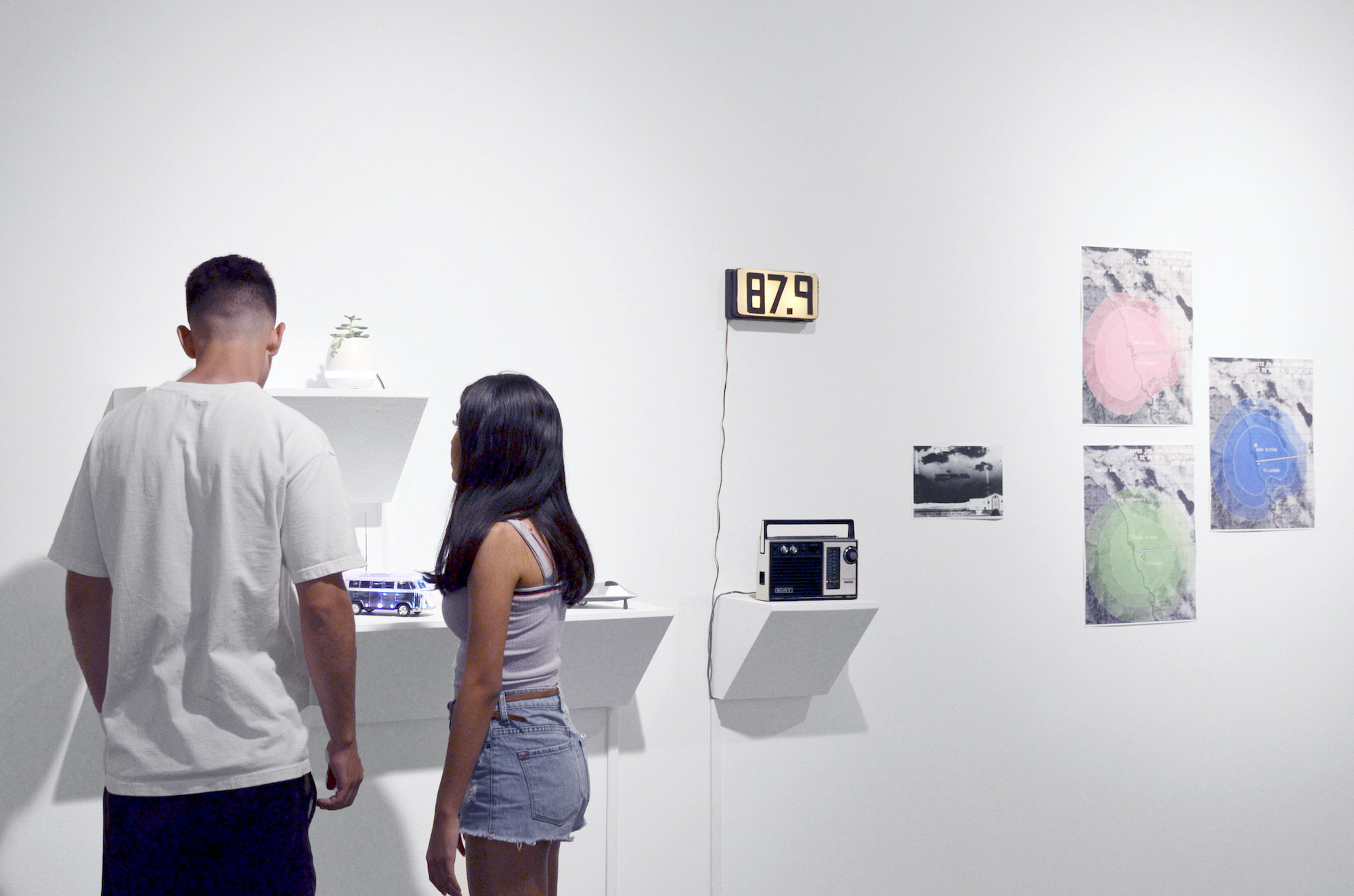 CALIFORNIA MIA, 2018-19 [In “Regionalia” at CSUF Grand Central Art Center] Sound-collage broadcast over FM radio signal, FM transmitter, FM radios, Archival Photographs, Digital (giclee) Prints Dimensions Variable Sound Installation that uses oldies songs and cover-songs in Spanish to explore topophilia, and feelings of longing that are associated with displacement. The sound-collage is played out of a collection of novelty radios sourced from public markets along the border. Photo by the artists.

1. Goods through which we fashion and orient our sense of self as inhabitants and/or cohabitants of a territory.
2. Objects that speak the “I” as collective: We are…
3. Cultural matter that disregard the borders that split us, mapping alternative spaces to be held in common.

In this sense, to speak of region is to speak of drawing “apart-ness”—of carving out distinct segments of territory, so as to establish, facilitate, and sustain rulership or dominion through(out) them.

The U.S.-Mexico border is one such dividing line. The Treaty of Guadalupe Hidalgo, which ended the U.S.-Mexico war (1846-1848) and annexed over half of the territory held by Mexico into the U.S., imagined a division where one did not previously exist—arbitrarily drawing a line on a map and splitting unified ecosystems and communities in two. This is especially true in regard to the border between Baja and Alta California. Confronted by desert and mountainous terrain without any natural features or landmarks that could mark (or justify) a border—the signatories opted to draw the California segment of the U.S-Mexico border as simply a straight line. Their rationale, as University of Nevada art history associate professor Susana Newbury later explained, was “to preclude all difficulty.”

Today, we witness how this arbitrary line continues to serve as both excuse and mechanism for ripping communities and families apart. Take the institution of “zero-tolerance” policies in the spring of 2018 against families crossing the border to request asylum via immigrant detention and deportation processes. Or the desecration of Kumeyaay ancestral burial land to make way for new segments of fencing.

[Regionalia] builds on these conversations, to further trace this nascent citizenship in a moment where the need to challenge how parameters of citizenship are drawn grows increasingly urgent.

At the same time, we also witness citizens working, studying, and living along and across the border, thus defying the border’s capacity to fragment or isolate. We see this in daily commutes, in the “smuggling” of second-hand goods from San Diego for resale in Tijuana, in networks of binational Indigenous organizing, and in individuals sustaining cross-border relationships. These are but a few examples of how border citizens enact a politics of refusal: insisting on connection amid a push toward division.

Such lives and actions prefigure an alternative form of citizenship (what scholar Matthew Longo has called a “borderland citizenship”) that emerges regionally and exceeds the bounds and logic of the nation-state. In cutting across the border, they point the way to new parameters for belonging and political participation.

Since founding Cog•nate Collective in 2010, we have been developing community-based research and binational artistic interventions that trace this emergent political identity through the model of the agora: public squares at the center of ancient city-states that hosted marketplaces and political debate concurrently, becoming cradles of democracy. Our creative projects test if and how present-day public marketplaces can sustain cross-border networks of cultural, social, and economic exchange, and incubate new forms of cohabitation and governance.

In dialogue with artists, scholars and community organizers, we reimagined the borders of our communities, locally, and (inter)nationally for an exhibition at Grand Central Art Center in Santa Ana, California, in the spring of 2018. There we documented how cultural exchange and informal economic activity in marketplaces can set the stage for relational practices of solidarity-building and agency-building through community networks. The monograph and catalogue for the exhibition Regionalia (released in February 2020) builds on these conversations, to further trace this nascent citizenship in a moment where the need to challenge how parameters of citizenship are drawn grows increasingly urgent.

In the last months, the conflagration of crises over health, racial violence, and climate change have rendered in stark terms how institutionalized exclusion and disenfranchisement lead to what the prison abolitionist and scholar Ruth Wilson Gilmore calls “group-differentiated vulnerability to premature death.”

In the face of crises—and national policies that insist on sowing division by criminalizing communities and weaponizing lines drawn on a map—we continue to ask how culture can help us bind ourselves with and to one another as co-inhabitants of a trans-border region.

We do this realizing that it will be at the seams where we must learn how to sew ourselves back together.