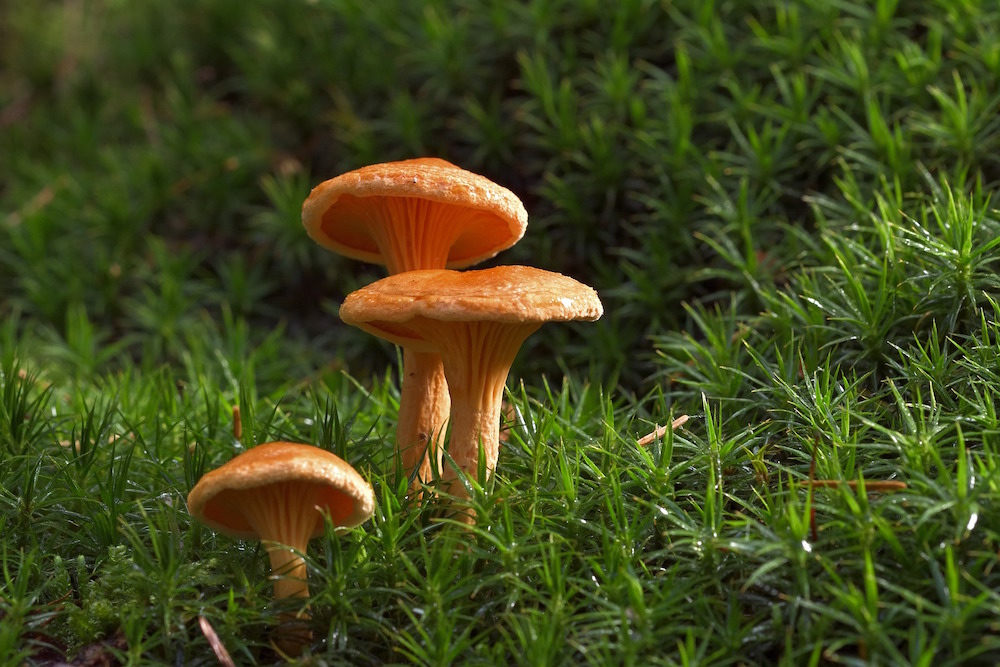 The slow process of foraging reminds us that price doesn't describe the real value of our food. Image by jggrz from Pixabay.

Sandwiched between shitakes and oyster mushrooms, I spot them: the golden treasures of the forest. Piled indecorously in a standard box that fits a standard shelf, they’re selling at a standard price, $24.99 per pound. Chanterelles cost more by weight than New York steaks and sockeye salmon. I move on. They aren’t worth the cost.

Two weeks later, I race across a steep hillside in Olympic National Park, picking through downed trees as fallen branches scrape my hands and my boots wobble uneasily in the soft forest earth. I’m making a feverish beeline for a tiny dot of gold in the distance, as if it might flee before I reach it. When I get there, I drop to my knees on the moss carpet and gently pry the mushroom from the earth. As I examine my prize, I realize a small wound in the center of my right palm is bleeding. It was worth the cost.

This is the paradox of chanterelles. They refuse to be tamed by cultivation or commodification and as a result, they upend our sense of value. The mysterious Cantharellus arise from ancient and complex relationships with trees and plants that call old growth forests home. Discovering how to replicate those conditions to cultivate the prized mushrooms would make a farmer rich, but the chanterelles would never allow it. Even their grocery store price tag feels like a lark, an inside joke whose punchline is consumer capitalism. Chanterelles are teachers who live deep in the woods. To forage is to seek out their lessons.

In the colonized world, our history books would have us believe that foraging is primitive and largely extinct. Hunter-gatherers were limited by the sustenance that nature could provide until agriculture solved the problem. Few words are spared for the natural abundance that flourished when we lived within our means. But today we are starting to see what happens when there are no limits on the growth of an intelligent omnivorous species.

Before agriculture allowed some civilizations to grow beyond their borders, Indigenous communities across the globe knew the names of their living neighbors, the ones who make good meals, heal the sick, and poison the inexperienced. They practiced—and many still practice—the Honorable Harvest.

In 2013, poet, botanist, and Indigenous advocate Robin Wall Kimmerer broke down the tenents of the Honorable Harvest in Braiding Sweetgrass, her love song to the living world:

Introduce yourself. Be accountable as the one who comes asking for life. Ask permission before taking. Abide by the answer.

Take only that which is given.

Never take more than half. Leave some for others. Harvest in a way that minimizes harm.

Use it respectfully. Never waste what you have taken. Share.

Give thanks for what you have been given.

Give a gift, in reciprocity for what you have taken.

Sustain the ones who sustain you and the earth will last forever.

It’s a philosophy of food that places humanity in a circular ecosystem, rather than at the apex of a pyramid. We might’ve lived sustainably with the land indefinitely under that system. But when we stopped foraging, everything changed. When we domesticated the land and ourselves, we forgot the names of the wild.

It probably seemed a fair price to pay. When we no longer needed to forage for food, we had time to develop new crafts. Technology, art, engineering, and exploration flourished and built the modern world. But agriculture allowed our species to balloon beyond nature’s intentions for us. We began consuming resources faster than they could be replenished. Agriculture created fertile conditions for industrialization and we are starting to see the consequences of that unnatural succession.

Don’t get me wrong. We need agriculture. “We cannot all become hunter-gatherers—the living world could not bear our weight,” as Wall Kimmerer writes in Braiding Sweetgrass. “But even in a market economy,” she continues, “can we behave ‘as if’ the living world were a gift?”

Chanterelles are teachers who live deep in the woods. To forage is to seek out their lessons.

It is possible. There is a growing movement in agriculture that respects the land and preserves it for future generations, by drawing simultaneously on Indigenous foodways and modern science. But the bedrock of our colonial food economy is the divine command, from the Book of the Genesis, to “fill the earth and subdue it; and have dominion over the fish of the sea and over the birds of the air and over every living thing that moves upon the earth.”

That dogma sowed the seeds of monoculture, hellish feedlots, devastating palm plantations, and deforestation across the globe. The civilizations who seized control of the world saw their surroundings as a catalogue of commodities rather than an ecosystem of partnerships. We forgot the names of the living beings who sustain us.

We forage to re-learn them.

In spite of myself, I always arrive at the forest’s edge with a colonial mindset: ready to conquer. I never find anything at first. “Be patient,” I must remind myself. “Speed will just slow you down.” Unlike much of our modern world, foraging rewards slowness. You’ll only find what you’re looking for by listening with patience and humility.

Eventually, the patterns of the woods emerge. Without the words to describe them, I begin recognizing good habitats for the mushrooms I seek. I tune into subtle variations in altitude, different textures of moss on the ground, the striations of bark on trees. There is no path. It’s an entirely non-linear way to move through the forest, in stark contrast with summiting a peak or descending a mountain on skis. All of my senses are engaged and in this heightened state of observation, the mushrooms reveal themselves.

Gradually, my basket fills with chanterelles, hedgehogs, yellowfoots, and mysterious fungi to be shown to more experienced foragers. The successful harvest satisfies a primal need that I didn’t know was missing before I became a forager, an identity I was slow to adopt.

Foraging runs in my family. I suppose it runs in all of ours if we climb high enough in the family tree. But I only had to reach for the branch above, my parents, who spent years trying to share what they had learned in the forest with their reluctant daughter. I just didn’t see the point. I wasn’t a fungiphobe as so many westerners are, but I saw mushrooms as just one of many ingredients easily acquired if a recipe called for them. Why devote a full day to foraging when a 10-minute trip to the grocery store could net the same result?

I didn’t understand until I found myself in the cool serenity of an old growth forest—making eye contact with an unfazed deer who stood between a flush of chanterelles and me—that the real treasure is the hunt.

Chanterelles teach us the virtues of wildness. When the conditions are right, they invite us to visit their secret dwellings, drawing us into a world that existed long before the rise of civilization. A world that will exist long after we’re gone. In their stubborn refusal to be cultivated, they reveal the limitations of humanity’s dominion over the Earth.

“The uncontrolled lives of mushrooms are a gift—and a guide—when the controlled world we thought we had fails,” writes anthropologist Anna Lowenhaupt Tsing in The Mushroom at the End of the World, which traces the strange ecological and economic forces surrounding the prized matsutake mushroom.

Lowenhaupt Tsing’s meditation “on the possibility of life in capitalist ruins” reveals how mushrooms make a mockery of our system for assigning value. You might think that knowing the effort it takes to find chanterelles would make me more likely to stomach the grocery store cost—and, in truth, sometimes I do—but the purchase never feels quite right.

Wild things aren’t easy to commodify. Filling a basket of mushrooms costs more time and energy than the sum of its nutrient parts. Yet somehow it is more nourishing than anything you could make from grocery store fare. The paradox makes efficiency seem like a poor metric for measuring value.

To forage is to declare a small revolution, to reclaim a shred of independence from a system that considers finding your own food a waste of time. It is a refusal to let our oldest foodway go extinct, a rejection of an entirely domesticated world. As long as we don’t know how to feed ourselves from the land, our survival is beholden to that system. Even learning to identify one edible mushroom in the wild is a step toward self-reliance that allows us to envision our survival beyond the edge of civilization.

Our consumer food economy requires the creations of nature to become standardized commodities. Each bushel of corn must be identical. Every bottle of milk homogenized. All fermented food pasteurized. Within this tidy system, the wild mushroom is an umbrella-shaped peg in a square hole. Can you put a price tag on a closely held secret chanterelle spot lovingly shared with eager companions? How do you quantify the cost of scaling a ridge for hours? What are the sore knees of the seasoned forager, who shows up to teach novices, worth?

If you tried to pencil it out, you’d probably conclude that foraging for mushrooms isn’t worth it. You would be wrong.