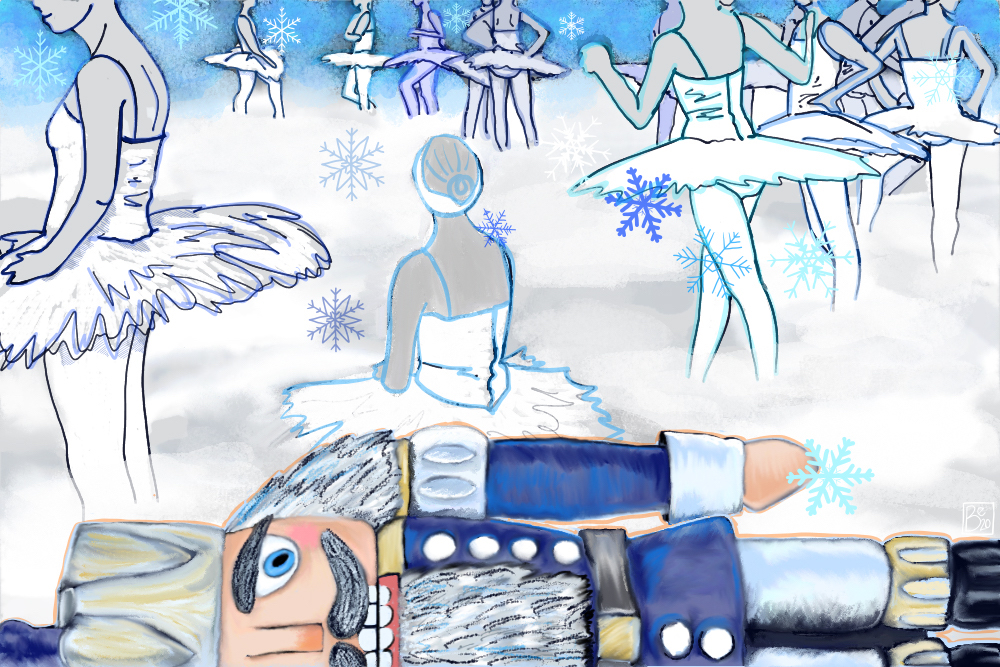 When July came and went and there was no audition notice from my daughter’s ballet school, no Doodle poll to survey my rehearsal availability, and no newsletter from ballet companies offering subscriber discounts, I knew. This would be a Year Without a Nutcracker.

At first, I was relieved. Over the last four decades, I’ve danced nearly every role in the beloved Christmas ballet, from Fritz (the little boy in the first act party scene who breaks the heroine Clara’s nutcracker) to the soloist roles such as Spanish Chocolate and Chinese Tea who perform for Clara (sometimes named Marie) in the Land of Sweets during the second act. I’ve also been a party guest, a soldier, a mouse, a snowflake, an angel, a flower. The roles I haven’t danced (in productions staged everywhere from the Grand Opera House in Uvalde, Texas, to the War Memorial Opera House in San Francisco), my husband has—Arabian, Russian, the Mouse King, the Nutcracker prince. Even our three children have danced in the Nutcracker. I’d be lying if I said I never get tired of it. Every year I get tired of it.

But that’s not why I was happy for a reprieve from visions of sugar plums. The truth is, for the last six years, I’ve been a rehearsal assistant for a ballet school in Oakland, and during the Nutcracker season, I stage the Chinese Tea variation, which means that every Saturday afternoon from September to December, I teach 7-year-olds to dip and bow and shuffle on the correct counts to prepare them for their 58 seconds on stage. On performance day, they don black tunics with frog buttons and Mandarin collars, their faces shadowed under coolie hats.

For years I’ve been cognizant that the steps I teach are at best an embarrassing show of artistic ignorance, and at worst a shameful display of racist cultural appropriation. But I’ve kept doing my job. After all, I tell myself, it’s not my choreography. I’m just teaching the same steps students have danced for decades. Besides, everyone else seems to be fine with it. When those 7-year-olds shuffle onstage, the whole audience coos, “Awwww!”

But each year, I wince a little more. It’s not just 58 seconds, I realize. It’s months of Saturday afternoons, year after year, reinforcing a cultural stereotype on young minds, and I’m the one demonstrating it.

Honestly? I’ve been too chicken to confront the director of the school and label these time-honored steps as cultural misrepresentation. This year, worries over COVID-19 contagion did my work for me.

To be clear, by traditional Nutcracker standards, what I teach is nowhere near as offensive as the yellowface, Fu Manchu mustaches, and geisha wigs that appear in so many Nutcracker Chinese variations across the United States—so racist and so prevalent that an organization called “Final Bow for Yellowface” was founded in 2017 to confront these harmful Asian stereotypes in theater productions.

And that’s just scratching the surface. In the Pacific Northwest Ballet’s 1986 Nutcracker movie (with sets and costumes by Maurice Sendak of Where the Wild Things Are fame), whirling dervishes wearing nappy dreadlock wigs dance in brownface alongside a turbaned Pasha and servants in fez-inspired caps, all set against the backdrop of an 18th-century Ottoman seraglio.

When I was a student on the brink of a professional ballet career at Pacific Northwest Ballet in Seattle, I danced over 150 performances of this version of the Nutcracker. Standing in the wings getting ready for “Waltz of the Flowers,” I didn’t think anything of the black dreadlocks or dark-brown makeup I saw on stage. At the time, it didn’t seem any different from growing up in El Paso, where my fellow Mexican American friends and I whitened our skin with baby powder to “fit in” as snowflakes for the snow scene of our local Nutcracker production.

Now, of course, I am appalled that there was a time when I normalized whitening or darkening one’s skin, and that I felt I wasn’t enough of an artist on the inside unless I looked the part—or how I was taught it should look—on the outside.

Each year, I wince a little more. It’s not just 58 seconds, I realize. It’s months of Saturday afternoons, year after year, reinforcing a cultural stereotype on young minds, and I’m the one demonstrating it.

That’s almost as bad as the middle-aged me who is too chicken to go to her employer and say, “This Chinese Tea variation is culturally inappropriate.”

What’s complicated is that the relief I feel from side-stepping the Nutcracker battle this year is mingled with my own sentimental feelings toward the ballet. As if on cue, an internal timer chimed right around Thanksgiving, and I was surprised to find I still felt a need for it, like an ache for comfort food.

I miss teaching the ballet, and moments like when all 12 second-graders realize that they need to plié on the count of five to jump on the count of six—and they actually do it.

So, Nutcracker, I admit it: I can’t quit you. But this year without you has given me the space to realize I have to demand better for you going forward. As a teacher, I will no longer be an accomplice to your Spanish dancers with pseudo-flamenco steps, your Arabian princesses in sequined I Dream of Jeannie midriffs and harem pants. I can’t condone rice paddy hats, even if they’re worn by adorable 7-year-olds.

As every ballet dancer knows, the short story “Nutcracker and Mouse King” was written by E.T.A. Hoffmann in 1816, then retold by Alexandre Dumas (the Three Musketeers guy)—and adapted by Tchaikovsky and his collaborators for the original St. Petersburg ballet. Tchaikovsky’s ballet spends the second act in the Land of the Sweets, where Clara watches an afternoon of dances supposedly from around the world, with official titles such as “Chocolate from Spain,” “Coffee from Arabia,” “Tea from China,” and “Trepak.” But in both Hoffmann’s fairytale and the Dumas version, there is no Land of the Sweets. No Spaniards. No consumer goods from Arabia or China. That international aspect was a convention of 19th-century balletomanes. It’s not germane to the original text.

But what I didn’t know until I turned to my local library’s quarantine-friendly curbside pickup to soothe my sudden Nutcracker ache this season, was that E.T.A. Hoffmann supplemented his writer’s income as a civil servant in Prussia, where he earned a reputation as a judge who couldn’t be bribed, even though this stance of moral integrity worked against him.

“Nutcracker and Mouse King” was a present to the real Marie and Fritz, children of an upper-class ministry official. In it, Hoffmann nested life advice in a fairy tale that is in turn nested in a fairy tale. The character Godfather Drosselmeier (arguably a stand-in for Hoffmann), who gifts the nutcracker to Marie in the first place, is the only adult who listens when Marie recounts her dreams. The tree grew to an enormous size, she insists. Her nutcracker and his soldiers fought a mouse king with seven heads, and she helped the nutcracker defeat the king when she threw her shoe at one of the crowns.

Everyone else tells Marie to keep her ideas to herself. Only Drosselmeier encourages her to break with social expectations, to trust in her imagination, and quite literally, believe in her dreams.

Because she does this, Marie becomes the queen of a magic land “where you can see … the most splendid and wondrous things.” That is, Hoffmann clarifies in his final lines, “if you have the right eyes to see them with.”

I don’t know if I have the “right eyes” to have all the answers here.

But I do know that I miss the cacophony of instruments in the orchestra pit warming up on opening night, and the magical moment when they become a single note before the overture begins. I know that when the conductor’s baton rises and pauses, it is like the space before a breath or the centering of the soul. I know that Tchaikovsky’s music, with its chimes and plucks and swirls, creates a special kind of magic that taps into a dancer’s heart. I know that we are all artists on the inside, regardless of what we look like on the outside. And if we can draw on that magic for new inspiration, I believe we have it in us going forward to create the most splendid and wondrous things.